ME/CFS with and without IBS Microbiome

Doing a few more hours of reviewing PubMed studies, I came across “Fecal metagenomic profiles in subgroups of patients with myalgic encephalomyelitis/chronic fatigue syndrome” [2017] There were some interesting findings.

Increased abundance of unclassified Alistipes and decreased Faecalibacterium emerged as the top biomarkers of ME/CFS with IBS; while increased unclassified Bacteroides abundance and decreased Bacteroides vulgatus were the top biomarkers of ME/CFS without IBS. Despite findings of differences in bacterial taxa and metabolic pathways defining ME/CFS subgroups, decreased metabolic pathways associated with unsaturated fatty acid biosynthesis and increased atrazine degradation pathways were independent of IBS co-morbidity. Increased vitamin B6 biosynthesis/salvage and pyrimidine ribonucleoside degradation were the top metabolic pathways in ME/CFS without IBS as well as in the total ME/CFS cohort. In ME/CFS subgroups, symptom severity measures including pain, fatigue, and reduced motivation were correlated with the abundance of distinct bacterial taxa and metabolic pathways.​ 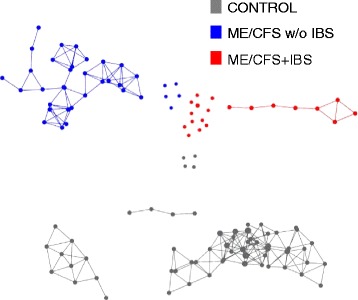 We observed reduced levels of members of the dominant phylum Firmicutes, also noted repeatedly in Crohn’s disease patients [13, 37, 38]. Proteobacteria were more abundant in ME/CFS patients than in controls, observed as well in inflammatory bowel disease (IBD) patients [39, 40].
significantly lower levels of the genus Faecalibacterium, a member of the Ruminococcaceae in the ME/CFS population. For example, Faecalibacterium prausnitzii, which produces an anti-inflammatory protein [45], is reduced in ME/CFS cases relative to controls. …. found a decrease in Bifidobacterium, previously observed in IBS [53–57], IBD [58], and type II diabetes [59]. Bifidobacteria are a group of lactic acid-producing bacteria that are widely used as probiotics and as targets for prebiosis [60]. Treatment with Bifidobacterium infantis 35624 was reported to reduce CRP levels in a cohort of ME/CFS patients [61].
Reduced diversity and altered composition of the gut microbiome in individuals with myalgic encephalomyelitis/chronic fatigue syndrome [2016]​
Bottom Line
This reinforced my hypothesis that symptoms (and perhaps official diagnosis) are strongly associated with microbiome dysfunction. It reinforces the 1998 study from Australia of microbiome dysfunction.
These reports will be incorporated into the condition profiles which need to be updated to the more sensitive Box-Plot code base.
Likes: Remi
Share: Facebook Twitter Reddit Pinterest Tumblr WhatsApp Email Link

I don't understand the majority of what you shared from the scientific paper. It would be truly helpful and greatly appreciated if in your bottom line you put into layman's terms what the study showed. I would really like to understand. And the reason why is because my problems began in my gut. And none of my 30+ doctors have been able to resolve that. Not even the head of digestive disorders at IU Health (he was terrible). So I became worse and worse and now I am disabled and my gut is still a mess... so what lies ahead for me if this downward spiral continues?

I have IBS-C, SIBO, pathogenic bacteria in my gut that do not respond to rifaximin + neomycin, gastroparesis, food intolerances, and no lactobacillus.

I have my Genova GI Effects results, 8 pages worth...

Phospholipids - HIGH
Calprotectin - HIGH
My best suggestion is to get a ubiome explorer test done (direct retail, no MD involvement) and upload the results to my (free) site.

The data goes into an artificial intelligence system loaded with some 80,000 facts and comes out with suggestions of things to take AND a list of things to avoid that is explicit for your individual microbiome.
Wow. Your site is fabulous. Props to you! And many thanks!
You must log in or register to reply here.