Healing story with labs to prove 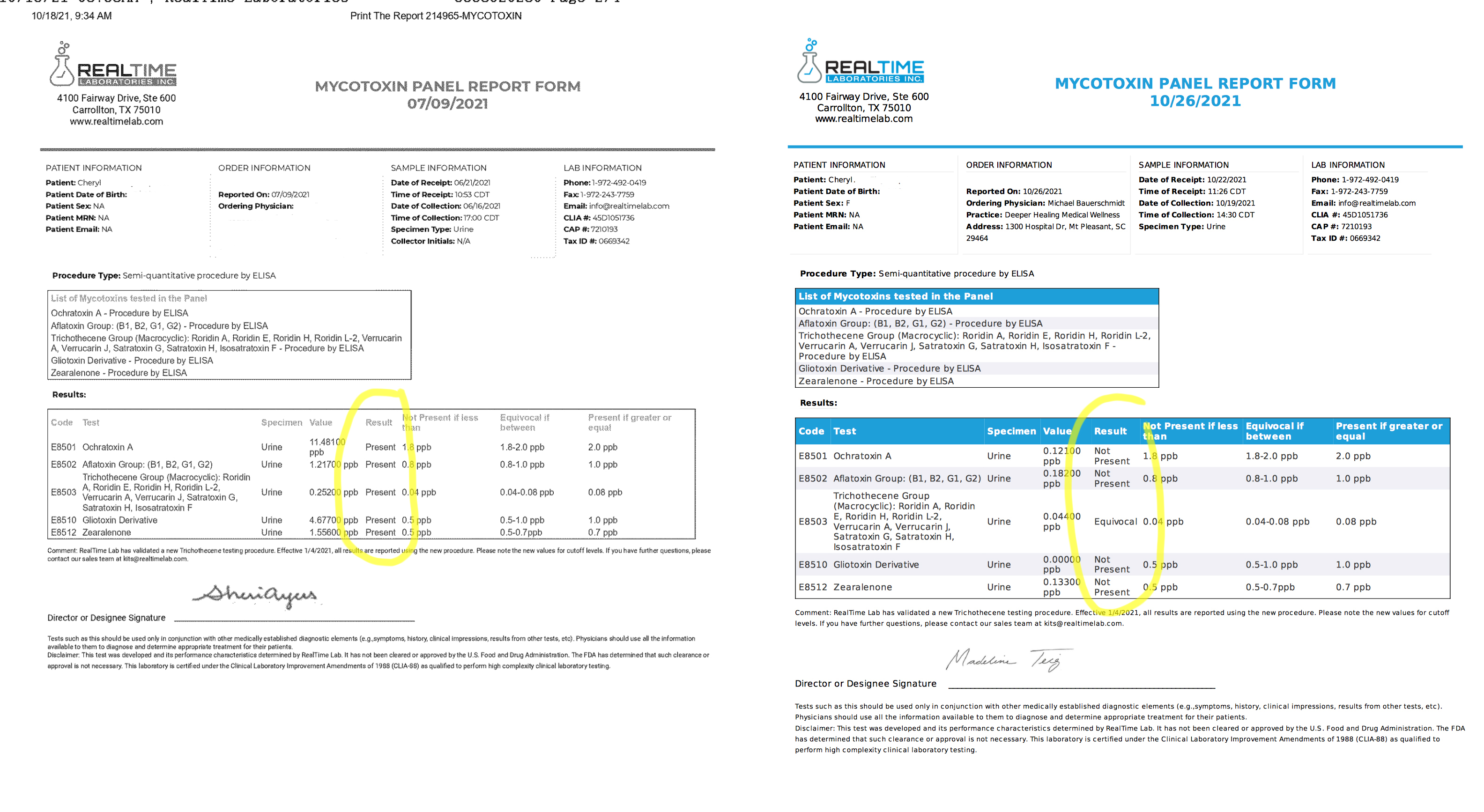 I became ill and hospitalized in July 2014. And by March 2017, I was too debilitated to continue working my part time office job.

In 2018, I was in a landmark clinical trial for MECFS led by a team of renowned researchers and a prominent MECFS physician.

And in 2019, I entered the functional medicine program at a famous clinic in Cleveland.

I had been seen by many other physician specialists renowned in their fields, as well as naturopathic and alternative health practitioners— in total I saw at least 35 different healthcare providers. I even traveled outside the country for 4-months to explore mold avoidance in pristine areas then afterwards moved to a remote mountain in the northeast USA.

But I just kept getting more and more sick until I was mostly housebound and often bedbound. I was at 30% on the Karnofskey performance scale at my worst.


I had periods of time where I thought I was healed — a modality would work miraculously. For example, my first mold sabbatical, my supplement regimen, and Nuvigil were all game changers. I have written about them previously.


In 2019, I began working with a specialist at a renowned MECFS center of excellence. That doctor was the first to prove what was wrong with me and why. Testing showed my body was filled with mold mycotoxins and chemical toxicants as well as old viruses, and pathogenic bacteria in my gut. I was given a detox protocol.

The good news is today [at the time of this writing] I learned that the 2-week Stay + Heal I did at Deeper Healing in the summer of 2021 cleared all the mold/mycotoxin from my body. See the attached lab reports from before and after treatment at Deeper Healing.

Treatment at Deeper Healing included the Cellular Cleanse (see deeperhealing.com for description), UVB with ozone, nebulizing, Brain Align, and IV therapy. At home, I did nebulizing, sunshine, Synctuition, glutathione, and supportive supplements and prescriptions (including those from my other doctors).

I am now doing LDA treatment for MCAS (it’s working!) and heavy metal chelation at Deeper Healing — Dr. Bauerschmidt was the only doctor to successfully diagnose that I have a heavy metal burden because he did the correct test. Prior to the heavy metals provoked challenge test that Dr. B did, the various blood, urine, and hair tests other physicians did gave false negative results. SMH! So I still have a little ways to go but I am elated to get such extreme results so quickly. Proof positive that Deeper Healing’s program worked!

I put myself at 70% on the Karnofskey performance scale now. And I am confident that I will make more progress and it will be lasting. The idea is that clearing the toxic burden from the body will allow the immune system to once again do its job. This is exactly what my MECFS specialist was trying to do. But they said it takes a long time. I am certain now that I needed a more aggressive detox program. The labs and my improvements prove that.

The cost was $8k for the 2-week stay and heal. I wish that I had gotten the treatment much sooner before I lost so very much. I cannot put a price tag on what was lost. It is incalculable. I have been so ill for so long. How could I put a price on that? I want to add: I met quite a number of people who were treated at DH and had miraculous recoveries and they have provided video testimonials on the website. I also have met three people who had similar treatments elsewhere and report that they have never felt better in their lives. That said, I would be very discerning about where I go for treatment.

BTW, back in 2018 the renowned MECFS specialist with the clinical trial after reading the results of my 2-day CPET said my prognosis was poor and that there was no known cause, treatment or cure. I told her that everything is cause and effect — so there is a cause and there is a cure.

Pro Tip: Get out of mold / toxic environment before treatment at Deeper Healing.

NOTE: I am not affiliated with Deeper Healing. This is not a paid endorsement nor do I receive any form of remuneration. I pray that sharing my journey helps those still suffering to turn their health and their lives around.

So happy for you that you have improved.

What were the viruses and bacteria identified? Did you take specific things for the pathogens?

What method was used to get rid of the heavy metals?
Hi Tammy, it’s just called heavy metal chelation. I get an IV but I don’t recall what’s specifically in it. Maybe you can read about it on their website. I am still doing chelation. I have not yet been tested to see if they have been cleared.

The viruses are EBV, HHV6, and parvovirus—all past infections. But both MECFS specialists that I saw said the virus was reactivating at times of stress. I believe they were referring to EBV. My titers for it are high. But I don’t think it has reactivated in years. There is a lot of benefit in getting out of flight fight freeze mode with brain retraining. How can the immune system and body heal if it perceives everything as a threat and it’s at war all of the time?

I cannot list all the bacteria because I would have to find the lab report. I know that good bacteria was low and bad bacteria was high. I also have had SIBO small intestine bacterial overgrowth. I tried lots and lots of treatments for it. The ONLY treatment that worked for me is erythromycin 500 mg 3x a day for 90 days AND going grain-free. It’s a protocol that I found in the clinical literature posted online and I contacted the gastroenterologist who published the paper. He was kind enough to respond via email. Then my personal gastroenterologist was kind enough to prescribe the therapy. It worked very well. But I went back to eating grains and then after getting a colon cleaning (hydrotherapy) it seems that I have SIBO again. I am about to send off a stool sample to have it tested.
Tammy said:
So happy for you that you have improved.

What were the viruses and bacteria identified? Did you take specific things for the pathogens?

More entries from I AM