Hello everybody.
Saturday (yesterday) I landed in the emergency.
Blood in the Urine and blood dripping from the vagina even though I have had no uterus since 1980. Ultrasound showed blood collection in the lower abdomen.
Blood thinner Marcumar, for the Antiphospholipid-Syndrome, was responsible for breaking through the cervix scar.
Now I´m back home by choice. Must wait until the bleeding stops to have eventually (not clear yet) an exploratory laparoscopy.
L

I'm sorry to hear about your problems, @SWAlexander.....however, one must be positive and think that at last they may find a reason behind so many of your problems. Patience will be the hardest thing to find as you wait for the bleeding to stop and a laparoscopy to be done. I certainly wish you well. Yours, Lenora

lenora said:
Patience will be the hardest thing to find
Click to expand...
You are right, patience is not one of my virtue.
So I thought, since I must be in bed I finally can catch up on some neglected BIO lectures.
I found out that some Prostaglandins are the culprit of thrombosis and the med BC007 could be more effective in fighting antiphospholipid syndrome.
All blood thinners, soon or later, can lead to internal bleeding.
Thanks for your kind words.

Last Friday an appointment with a gynecologist. He sent me straight to the emergency.
In the emergency, I had a doctor who listen to me after blood in my urine was found again. He did not ignore my wish and ordered among many other tests a CT with contrast.
Results: diverticulitis with a broken fistula. The upper part of my sigmoid colon was as thick as my arm, caused by acute inflammation. This was the reason I was bleeding from the vagina even though I had no uterus.
This however was good since the blood came out instead of turning into gangrene.
Instead of being bombarded with antibiotics, or having surgery (Ileostomy), I am now on - 3 weeks of 1-gallon water daily, only light broth and once a day very mild smoothies.
I agreed to this because I believe I would not survive another surgery.
After the last surgery in 2016, the doctors had a hard time waking me up after anesthesia. Today I know the reason - post-polio.

Jesus that sounds really horrendous. You must be in so much pain!

I don't know why we deteriorate so badly after a general anaesthetic but as someone who's had one I can totally attest. They really mess us up. If it is enterovirus that causes the post worsening then that would be interesting.

I really hope this works for you.
L

I'm so glad they found the cause for your illness, @SWAlexander. Quick thinking Dr, which probably saved you from a bad outcome.

Be good, do as your told and know that you aren't missing anything. After all, it's August. Yours, Lenora

Lenora, you are very concerned, thanks.
"Be good, do as your told..."
That's the hard part. I´m stubborn in many ways, - not this time. I just don´t feel like dying yet.
The same doctor called me today to remind me how seriously ill I am and how dangerous a busted diverticuli - fistula can become.

Hello to all you very caring people.
I´m again on the mend. Almost no more pain.
I stopped all meds except Hydrocortisone but I take VEDICINALS-9.
Yesterday and today I had a little green salad and a soft-boiled egg and lots of water and self-made mixed juice.
Short naps during the day. The energy level is slowly coming back. It remains a wait-and-see situation.
No inflammation blood test yet. My doc is still on vacation until Aug. 28.

Here we go again - false diagnosis.
The last CT scan at the emergency Aug. 5th did not reveal the major indicator for bleating.
When I received a direct connection to a radiology CT scan and I began looking for the bleeding fistula. There was no indication of a ruptured fistula in the sigmoid. I concluded that one of the Tarlov cysts caused the bleeding. So I called radiology and asked for the doctor who evaluated the CT. Like in many cases before, this doctor was also too busy to talk to me. The assistant ask me what my question to the doctor would be. Point blank I told her that there is an incomplete or faulty diagnosis, and there is no mention of the Tarlov cysts. Well, she answered, "we don't look for cysts in the sacrum if not specifically asked for." She asked why I think I have cysts. I asked her for her direct email address and sent her right away the previous CT scans reports that showed cysts in the sacrum and T11 and 12 and a link that explains how to "Diagnosing Tarlov Cyst Disease" .
and "Spinal Meningeal Cysts & Tarlov Cysts"
These are the symptoms described by Dr. Frank Feigenbaum and Reta Honey Hiers, I have a lifetime:
Dr. Feigenbaum: Symptomatic is in the sacrum and when the sacral nerve roots get compressed as a result of a Tarlov cyst patient typically experiences a specific constellation of symptoms it's usually sacral pain radiating to the buttock down the back of the leg to the foot. They can get numbness in those areas and weakness in the feet. particularly in pushing up or climbing stairs, they can get pain or numbness in the private areas, bowel and bladder dysfunction, painful intercourse or sexual dysfunction and in particular difficulty sitting. Can´t find a comfortable position to sit patients are constantly squirming in their chairs. Symptoms are made better by lying down.
Reta Honey Hiers, Tarlov Cyst Disease Foundation. www.tarlovcystfoundation.org
Hips legs feet as far as nerve pain causes more nerve damage over time so symptoms involving headaches all the visions sensory issues board vision double vision because it increased spinal fluid pressure causing. In some instances papilledema optic nerve swelling would cause those vision changes and vision symptoms also auditory changes in terms of pushing noises or a feeling as if you’re in a plane and you've changed sort of level and your ears sort of stopped up or some patients experience sounds like buzzing popping snapping cracking crickets. I'm just mentioning all those that have been mentioned by patients that they experience so the set of symptoms literally, that can go from head to toe starts to make the patients and a little crazy in their own head multi systems issues and it doesn't make sense to a lot of the medical community that there could be that many body systems involved.

I am so tired of false diagnoses for nearly 70 years, where patients are blamed or even accused of being hypochondriacs.
I wish nobody the overwhelming pain these cysts produce, where no pain meds work.
MRI 2016 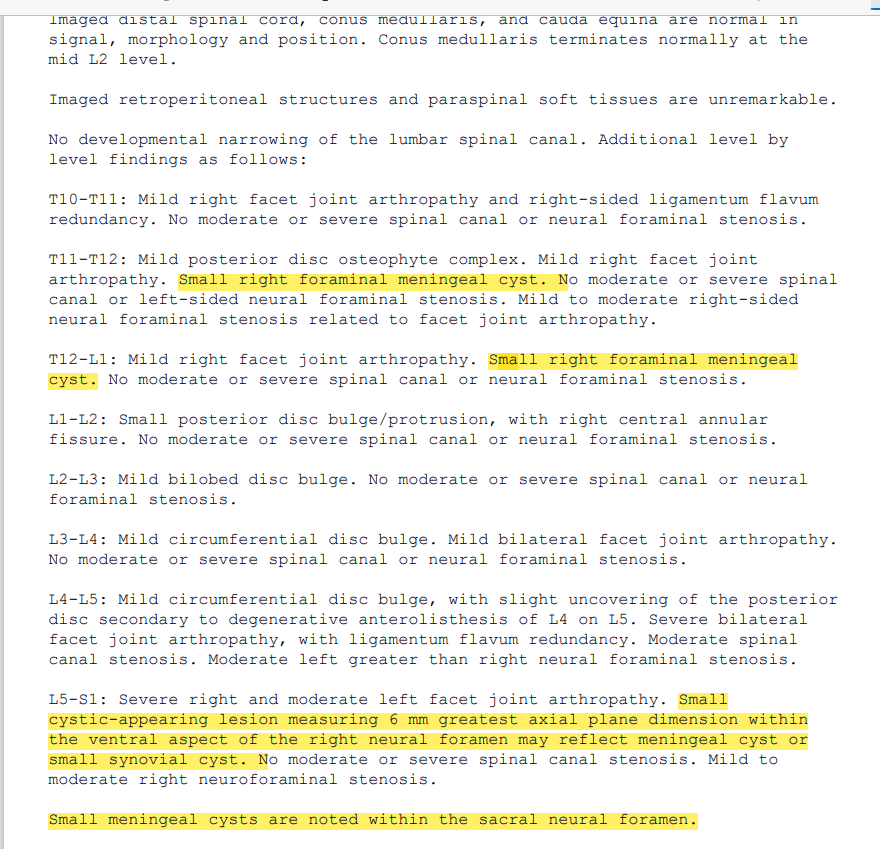 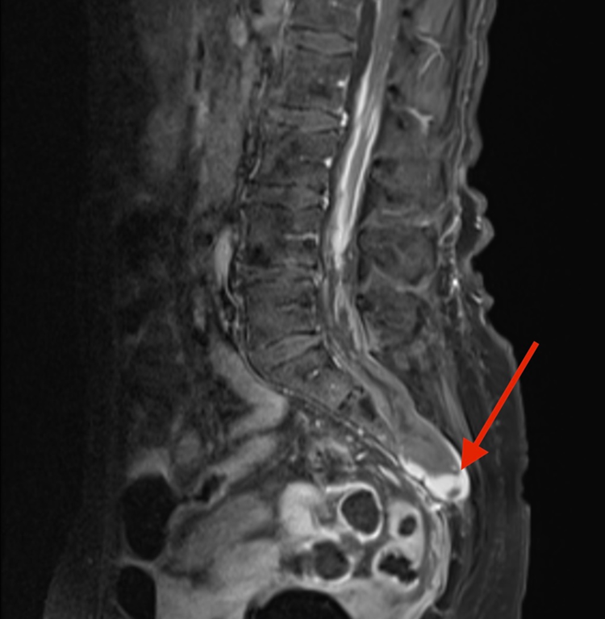 Tarlov cysts formation Causes and Symptoms
Excerpt:
Although the cause(s) of Tarlov cysts formation is yet scientifically unproven,there are a number of conditions that can create increased spinal fluid pressure, increasing the flow of cerebrospinal fluid into the cysts and causing them to expand in size and create symptoms. The cysts are then termed symptomatic Tarlov Cysts. Some incidents or conditions that might potentially cause the asymptomatic cysts to become symptomatic are traumatic injuries such as falls, automobile accidents , heavy lifting, childbirth, and epidurals. Trauma to the spinal cord, an increase in the CSF pressure, or a blockage of the CSF can result in cyst formation. Read “What happens in spinal cord injuries?” in Our Library. It is also noted that the herpes simplex virus can cause the Tarlov cyst symptoms to worsen during a herpes virus outbreak, but there is no known “connection” related to any virus or infection with causing Tarlov cysts to develop.

Background: CVFs are an increasingly identified type of spinal leak in patients with spontaneous intracranial hypotension (SIH), and CT- guided fibrin glue occlusion has been introduced as a treatment option in a prior small series.

Methods:
Retrospective case series review of medical records from a single institu-tion was performed for all patients with CVFs that were treated with CT- guided fibrin glue occlusion between August 2018 and April 2022 in an outpatient or inpatient setting. Pre- and posttreatment Headache Impact Tests (HIT-6) were administered to patients, and a change in scores was evaluated. In some patients, pretreatment HIT-6 tests were not obtained prior to the fibrin glue procedure, and the patient was asked to fill out the pretreatment test based on personal recall of their symptoms prior to treatment. Patients completed a Patient Global Impression of Change (PGIC) scale after treatment. Pre- and posttreatment brain imaging was compared using Bern SIH scores.

Researchers identify possible target for a type of sporadic ALS

What
Researchers have published two papers describing how they identified a potential new pathway for treating a sporadic form of amyotrophic lateral sclerosis (ALS). The studies were published as part of a cooperative research agreement between the National Institute of Neurological Disorders and Stroke (NINDS), part of the National Institutes of Health, and the Switzerland-based biotechnology company GeNeuro Inc.

One unusual side effect of hundreds of thousands of years of evolution is that the human genome now contains DNA sequences from ancient retroviruses—referred to as human endogenous retroviruses (HERVs). Though most remain dormant, reactivation of HERVs have been implicated in several neurodegenerative diseases, including ALS.

The first of these papers shows that a specific HERV produces a protein that can be found in the cerebrospinal fluid (CSF) of people with ALS. This protein, called HERV-K ENV, is toxic when added to neurons grown in laboratory dishes. In addition, a special kind of mouse genetically designed to create HERV-K ENV develops symptoms very similar to ALS. Adding the CSF from people with ALS to lab-grown neurons resulted in damage to the cells. When a synthetic antibody designed specifically to recognize HERV-K ENV was added as well to those neurons, the toxic effects were reduced. These findings together suggest that the improper activation of the HERV-K ENV gene could be the cause of the symptoms seen in certain cases of sporadic ALS.

The discovery that a synthetic antibody to HERV-K ENV could be protective led the researchers to look at whether the immune system of people with ALS produced any antibodies, as well. In the second paper, the authors show that indeed higher levels of antibodies against HERV-K ENV were seen in the blood of a group of people with ALS as compared to healthy donors. The pattern of antibodies against this viral protein was also more complex in persons with ALS. In addition, there was also a correlation between higher antibody levels against HERV-K ENV and longer overall survival.

Together, these findings add evidence to the hypothesis that a reactivation of the HERV-K virus plays a role in the development of ALS, and that an antibody response against it is protective. These data also suggest the possibility that treatment with a synthetic antibody raised against HERV-K-ENV might have beneficial effects in those persons with ALS who also have evidence of HERV-K reactivation.