Partly due to the fact that SIBO commonly returns after each treatment, some people are saying that there must be an underlying condition that needs to be addressed. Some of these people feel that the cause of SIBO is slow gastrointestinal movement (motility). Basically, the autonomic nerves that are supposed to stimulate the intestinal muscles to move food along the digestive tract are not providing enough stimulation to move food along fast enough. (a type of dysautonomia) As food sits around in the small intestine, there can be growth of bacteria, archaea, and fungi, just as food that sits out of the refrigerator for too long can become rotten.

One paper looked into the possibility of slow gastrointestinal movement (motility) and reported:

Background: Altered small intestinal motility is thought to contribute to the development of small intestinal bacterial overgrowth (SIBO). The clinical manifestations of SIBO and consequent malabsorption are wide ranging and include abdominal pain, bloating, diarrhea, weight loss, and nutritional deficiencies. However, due to the nonspecific nature of symptoms, the diagnosis may often be overlooked. To date, few studies have illustrated a direct relationship between impaired small intestinal motility and SIBO. In addition, further study has been limited by the technical challenges and lack of widespread availability of antroduodenal manometry. The development of a wireless motility capsule (WMC) (SmartPill) that evaluates pressure, pH, and temperature throughout the GI tract offers the potential to identify patients with small bowel transit delays who may be at risk for bacterial overgrowth.

Conclusions: Patients with underlying SIBO have significant delays in SBTT as compared with those without. The association between prolonged SBTT and positive LBT may be useful in identifying those patients with SIBO diagnosed by LBT and potentially target therapeutic options for those refractory to standard therapy. Interestingly, patients with positive LBT did not necessarily have a generalized gastrointestinal motility (similar [Gastric Emptying Times] among groups), suggesting that small bowel transit specifically predisposes to the development of SIBO. Future, prospective studies are needed to further characterize intestinal dysmotility and other contributing pathophysiological mechanisms in SIBO and to investigate the potential benefits of prokinetics in this challenging patient population.
Click to expand...
(emphasis added)

Heavy metals, many other toxins, chemotherapy, concussions, many general viral infections, because they often effect the gut too."

I've read recently that 50% of covid 19 patients have had gastrointestinal symptoms and that the virus directly effects the small intestine.
K

I think we will get some better answers once the the 'human gas capsule' gets to market . At the moment, there's no way of knowing which gas is coming from which part of the GI tract.
https://www.gastrojournal.org/article/S0016-5085(15)01513-9/pdf
http://www.australasianscience.com....2016/capsule-look-inside-irritable-bowel.html

Then again, I'm a cheapskate so I'd just take the partially hydrogenised guar gum (eg Sunfiber) and just do a colon cleanse which can also remove a bacterial overgrowth.
https://www.ncbi.nlm.nih.gov/pmc/articles/PMC2852716/

ljimbo423 said:
I think slow gut motility could cause SIBO. I also think SIBO can cause slow gut motility.
Click to expand...
Yes, it's always important to make sure we're not accidentally reversing cause and effect. I've read that some of the intestinal gas produced in SIBO physically blocks the movement of food in the small intestine. But perhaps the gas wouldn't be there in the first place if the small intestine was moving food through it fast enough.

ljimbo423 said:
This is a list I've saved of potential things that could cause or contribute to SIBO-

Heavy metals, many other toxins, chemotherapy, concussions, many general viral infections, because they often effect the gut too."
Click to expand...
Wow, that's quite a list. I wonder if low-grade intestinal inflammation would slow down the movement of food in the intestines. If so, then anything that triggers such inflammation could be a contributing factor to SIBO?

kangaSue said:
I think we will get some better answers once the the 'human gas capsule' gets to market . At the moment, there's no way of knowing which gas is coming from which part of the GI tract.
https://www.gastrojournal.org/article/S0016-5085(15)01513-9/pdf
http://www.australasianscience.com....2016/capsule-look-inside-irritable-bowel.html
Click to expand...
That's a good point. Gas is perfectly normal for the large intestine (colon), but not for the small intestine. And thanks for those articles, I had fun looking through them. They reminded me of some of the biosensors we studied back in my PhD program.

kangaSue said:
Then again, I'm a cheapskate so I'd just take the partially hydrogenised guar gum (eg Sunfiber) and just do a colon cleanse which can also remove a bacterial overgrowth.
https://www.ncbi.nlm.nih.gov/pmc/articles/PMC2852716/
Click to expand...
That's an interesting article. I'm going to post an excerpt from that paper for the benefit of others:

Conclusions: Intestinal permeability was increased in patients with IBS, but this finding did not correlated with the occurrence of SIBO.
Click to expand...
Here are what I see as some points made in this article:

Another interesting discussion on this topic can be found here:

I have been wondering if one big key to SIBO is in fact the dysfunction of the Migrating Motor Complex (MMC) in a fasting state.
(Cholinergic influence on the Enteric Nervous System ) -so a combination of hormonal and electrical activity.
https://www.sciencedirect.com/topics/medicine-and-dentistry/migrating-motor-complex

cholinergic involves the use of neurotransmitter Acetylcholine. (parasympathetic nervous system.)


It seems a healthy gut which goes through full phases 1, 2. and 3 of this "clean sweeping" nightly, and during fasting states in daytime too, are kept clear of small intestinal bacterial overgrowth.

So anything dysregulating the autonomic nervous system, with a sympathetic NS bias could disrupt the MMC

When I got fusion of C3-C6, I had A LOT of gas exit my body about 3 or 4 days after the surgery. Since then, I have been experiencing normal flatulence when before, I had all but stopped having any. I noticed this disappearing as my ME/CFS progressed. I wonder if the stenosis was affecting my gut motility via pressure on the vagus nerve or something? Anyway, I am still sick so .....after 27 yrs my gut it beyond repair perhaps. It is also possible I am imagining the whole thing and the flatulence was because my diet was changed.

But as you know, there have been many who are in remission after (cranio)cervical fusion

Ive read that a good portion of CFS Patients has SFN. And SFN causes dismobility of the gut and is linked to SIBO and IBS.

mitoMAN said:
Ive read that a good portion of CFS Patients has SFN. And SFN causes dismobility of the gut and is linked to SIBO and IBS.
Click to expand...
Can you share what SFN stands for, please?
D

Among probiotic options, Lactobacillus Rhamnosus (marketed as Culturelle) has been shown to improve gut motility in mice.

ebv, norovoris, and some others can damage neuromodulatory cells in the gut, leading to gastroperisis too

I thought I had posted this article here before but obviously not.

One measure that can be tried for suspected SIBO is to take a taurine supplement.

There's probably more to it than just that though. Bile composition has effect on gastric motility and taurine makes bile more hydrophilic (water soluble). Ursodeoxycholic acid which has similar effect has been found to be beneficial for SIBO in those with functional dyspepsia (FD), and there's significant crossover in symptoms between IBS and FD.

Here's another interesting paper, which raises the possibility that dysautonomia of the ileocecal valve (ileo-cecal reflux) might also contribute to SIBO. 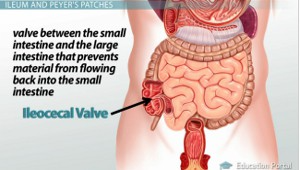 The literature regarding the ileocecal valve (ICV) and its relationship to small intestinal bacterial overgrowth (SIBO) is limited. [...] Surgical removal of the ICV maximizes reflux ultimately leading to bacterial overgrowth.
[...]
In the current study, we aimed to explore whether patients with a positive lactulose breath test (indicative of SIBO) may have an incompetent ICV leading to reflux of [large intestine] contents into the small intestine[10]. To test this hypothesis we measured pressures within the ICV during cecal distension and compared these pressures with the results of lactulose breath tests.
Click to expand...
M

@Pyrrhus can I ask your opinion on this interview on SIBO: https://www.thesibodoctor.com/2017/12/20/sibo-and-hydrogen-sulfide/#dr-greg-nigh

I don't think that hydrogen sulfide is tested for in standard SIBO breath tests - perhaps it should be. But its strong "rotten egg" odor should be easily recognizable.

In any case, it's not directly relevant to dysautonomia or gastrointestinal motility.
M

I was more curious about those patients' remission without intervening on the autonomic nervous system, I mean that approach isn't targeting motility.
By sulfur intolerance you mean sulfur sensitivity such as having a reaction to eating eggs for example? That's a known reaction afaik.

motorhead said:
I was more curious about those patients' remission without intervening on the autonomic nervous system, I mean that approach isn't targeting motility.
Click to expand...
I'm sorry, I didn't see that part of the transcript. But yes, SIBO can certainly be treated without targeting motility. The problem is that it might return after the treatment...

motorhead said:
you mean sulfur sensitivity such as having a reaction to eating eggs for example?
Click to expand...
There are a few ways that people might have bad reactions to foods which they might characterize as "sulfur intolerance":
But none of these phenomena could technically be called "sulfur intolerance", although I certainly see why it is a tempting phrase to use. A better phrase might be "methionine/cysteine sensitivity".

Here's a good link that discusses this further:
https://deannaminich.com/is-there-really-such-a-thing-as-sulfur-intolerance/