NICE are NOT going to publish the new guidelines tomorrow

Maybe the guideline gets published as it is, but doctors won't diagnose ME, but MUS or the like. So they can keep on using their "treatments".

It's sth. I know from Germany. Here, they simply don't diagnose ME or CFS, but chronic fatigue, neurasthenia (by those from 19th century), depression and psychosomatic illness. Or they re-diagnose ME with the like. Have fun fighting against that, when doctors enjoy a jester's license. I've just learned a short while ago that a doctor's diagnosis is legally viewed as an opinion.

NICE – contemptuous and contemptible: the case for community publication of the “paused” guideline for “ME/CFS”
https://valerieeliotsmith.com/2021/...blication-of-the-paused-guideline-for-me-cfs/
A

Valerie Eliot Smith's suggestion that those who have a copy of the guidelines should make them public might sound like a good idea but it wont do the credibility of the me/cfs community much good. And next time the guidelines are reviewed (about 10 years time) they might not get invited to take part in the process.

The fantastic @Pyrrhus beat me to it!

Thanks for updating the forum.

@Bronc Not much traction about a protest in Manchester I’m afraid, but there is nearly a whole month to keep the discussion going.

I didn’t find Facebook groups any good to be honest. Lots of rules about what you can and can’t post. Plus, a lot of members appear to not have a good understanding of ME/CFS.

If anyone knows of any good UK Facebook groups let me know.

Found this today and it gave me some hope:

andyguitar said:
Valerie Eliot Smith's suggestion that those who have a copy of the guidelines should make them public might sound like a good idea but it wont do the credibility of the me/cfs community much good. And next time the guidelines are reviewed (about 10 years time) they might not get invited to take part in the process.
Click to expand...
I agree for all the reasons you've stated. Our collective suffering at the hands of the medical establishment is causing pwME a great deal of anxiety, as we don't trust them. Rightly so, as they’ve failed us up until now!

However, to publish before NICE doesn't seem like it’s the correct way to go. No one would follow it anyway as it’s not from the official source. I would see that as just creating more havoc amongst the already chaotic situation.

It would probably be better to challenge any changed published guidelines via a judicial review - which in the past didn't work, but this time the draft holds a lot of evidence.

The patient committee members may also go on to influence other areas of reform. Whether that is distributing the correct information about what GP’s/specialist clinics should be doing, advising on patient care, etc. I don’t think it’s a good idea for them to hand over their embargoed copy to anyone at this stage. We need credible pwME to attain close links to health organisations.
L

godlovesatrier said:
Found this today and it gave me some hope:
Click to expand...
This message is reassuring. Honestly, I'm tired from all the energy I've given into thinking about the pause and fearing what may happen next.

godlovesatrier said:
@livinglighter wow I see mention of Manchester!! Didn't know anyone on here was even from Manchester.
Click to expand...
I’m not from Manchester, but Bronc mentioned it being easier to attend.
Last edited: Aug 27, 2021
L

Not to take this thread off topic, but I learnt through Twitterverse that Esther Crawley is carrying out exercise trials on Long COVID children. Claiming more BS about cost effective treatment.

The phrase ‘cost effective’ makes every service provider’s ears prick. She must be fighting for GET to remain. 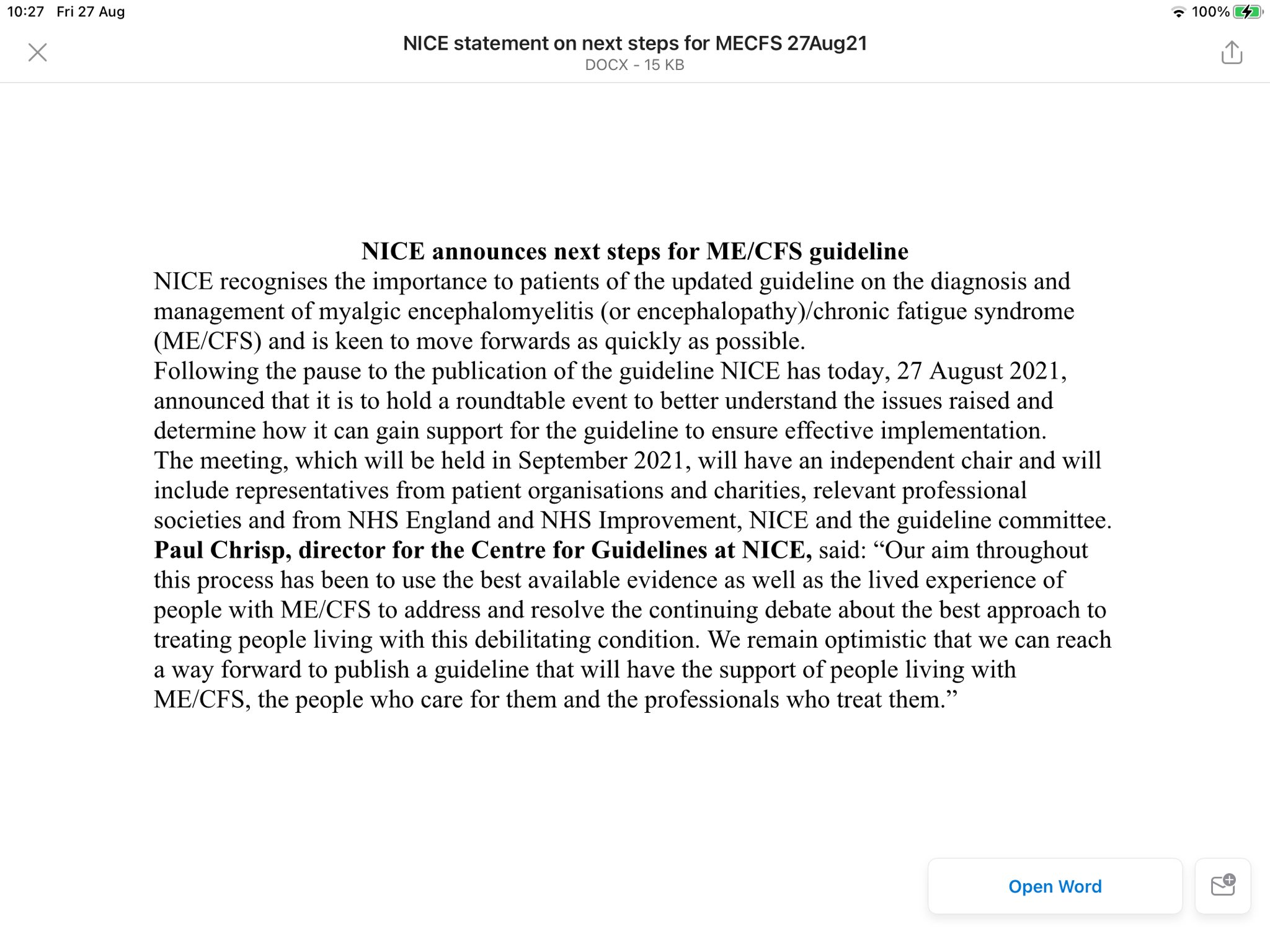 My first thought was, 'Will Mrs Wessely be invited to be the independent chair?'
L

Countrygirl said:
My first thought was, 'Will Mrs Wessely be invited to be the independent chair?'
Click to expand...
I hope the all patient stakeholders are given all the relevant information in time to prepare for what’s in store at that round table!

I cannot understand how not implementing fixed incremental exercise is challenging, is it not just one element of GET? Nor, how switching from CBT from being a treatment for fear of exercise to being a supportive method for coping with long term chronic illness is hard. It doesn’t involve changing staff, or extra money for new resources.
S

Look at the bright side - these guidelines are going through eventually and the toxic bastards weren't smart enough to move with them and pretend they've always been on board. This is a stick we can beat them with when our day comes.
B

More dither and delay. These doctors will never accept the science so there is zero point trying to once again bring them around, they have 3 years to come around to it. At this point the NHS needs to defund the CFS clinics and move forward without these people, anything else is just wasting time and money. Every day they delay is another day I can't get medical aid from my GP because he is "following the guidance" and NICE know this, a round table wont do a single thing to change that fact. Defund these cretins getting money on the NHS and spend it on research, it really shouldn't be this hard to do the right thing.
L

I’d like to say I have strong faith in the NHS wanting to do the right thing - but I don't. They are under pressure due to all the cut backs. The current model of patient care saves them a lot of money! I have a feeling it's the NHS that has caused this pause more then anyone else.

Look at this new article by Tom Chivers. BPS supporters have managed to get to him privately and have influenced him to become impartial to the debate. It may also provide a better idea about what may also receive further scrutiny.

I wasn't aware the NHS HRA had independently reviewed PACE and decided there were no regulatory concerns about the conduct of the investigators in relation to issues raised with the trial.

Depressing. I love how he basically said GET was no worse than pacing as a treatment and therefore it can't be said it was any worse. Where in god's name do they or does he get this idea from!
L

godlovesatrier said:
Depressing. I love how he basically said GET was no worse than pacing as a treatment and therefore it can't be said it was any worse. Where in god's name do they or does he get this idea from!
Click to expand...
With all the issues of the trial you would think one would avoid justifying anything about it. That is until you are shown the NHS HRA assessment. I think the NHS are in cahoots!

They credit the biopsychosocial model for saving the NHS money and minimising secondary care, etc.
It's actually quite concerning.

Meanwhile an untold amount of patients are being re-diagnosed with mental health conditions at the services.

godlovesatrier said:
Depressing. I love how he basically said GET was no worse than pacing as a treatment and therefore it can't be said it was any worse. Where in god's name do they or does he get this idea from!
Click to expand...
Not to speak of the methods and time spans they used to verify who is doing better or worse. They are trying to separate the subjective methodology from the downgrading as if GET was still a proven therapy with moderate certainty. I'm no expert on GET and the PACE trial, but this should really be addressed. To me, it's still a manufactured outcome of the PACE trial. But I haven't looked into the other trials. Do the other trials still provide moderate certainty and what requirements were made? What improvement does really occur? Which outcome criteria should be selected?

In my view, only objective and long-term outcomes are relevant. They had so many years to address it, their loss if they failed to show sufficient evidence that GET+CBT provides objective long-term improvement. And they might also consider all the evidence that actually contradicts the underlying idea that oxidative capacities can be improved within the pathophysiology of ME. The evidence that shows inflammation and immunological hyperreactivity after physical exertion. What's their explanation for this and what can you do if the inconsistencies also downgrade evidence because they point out the risk of bias in previous psychiatric research.

FORWARD - ME make a statement concerning the NICE debacle


----------------------------------------------------------
NICE roundtable: Forward-ME statement - 27 August
— START —
Forward-ME have now had a number of direct communications with NICE regarding the delay, in which we have shared the concerns of the wider ME community.
The guideline development process was robust and there is broad recognition that it stands up to scrutiny. It is clear that any guideline produced by this method should be published in full, and we are committed to achieving that.
Forward-ME does recognise that the support of all stakeholders would benefit the roll-out of the new guidelines, and we understand the challenges that NICE have in achieving this.
While we remain cautious about the situation, we are confident that any round-table will be conducted in good faith, and are reassured by the discussions we have had so far.
If the Round Table does not reach the desired outcome with full publication of the new guidelines, Forward-ME and our members will take every possible step to ensure the final guidelines in their current form are published in full. Plans are in development to ensure we can act robustly if needed.
People with ME deserve better, and we will continue to work together to achieve that.
— END —
L