I think it is great that these people are exploring different avenues, and no matter whether right or wrong, will help to advance knowledge as truly good science should.
Last edited: Dec 17, 2016

Dauer is related to FOXO genes so research that I think.

i would like to know if the studies findings have been cross-checked with other diseases, that show similar patterns.

if so which ones?

I did this a little while ago.

I was interested in the key metabolites that Naviaux mentioned in the paper, but couldn't help wondering about the hundreds of others that were tested. When the data was released on the metabolomics workbench site I made a few graphs, but didn't have an account to post it here.

It is a very simple analysis of the raw metabolomic data in the Naviaux paper. Each blue column represents a different metabolite. Data is presented using ratio of average of sick patients to average of healthy patients; and without measuring variance or statistical significance. (nb the authors do more sophisticated analyses than this to obtain their fold change scores published in the paper.) Nevertheless some patterns can be seen. 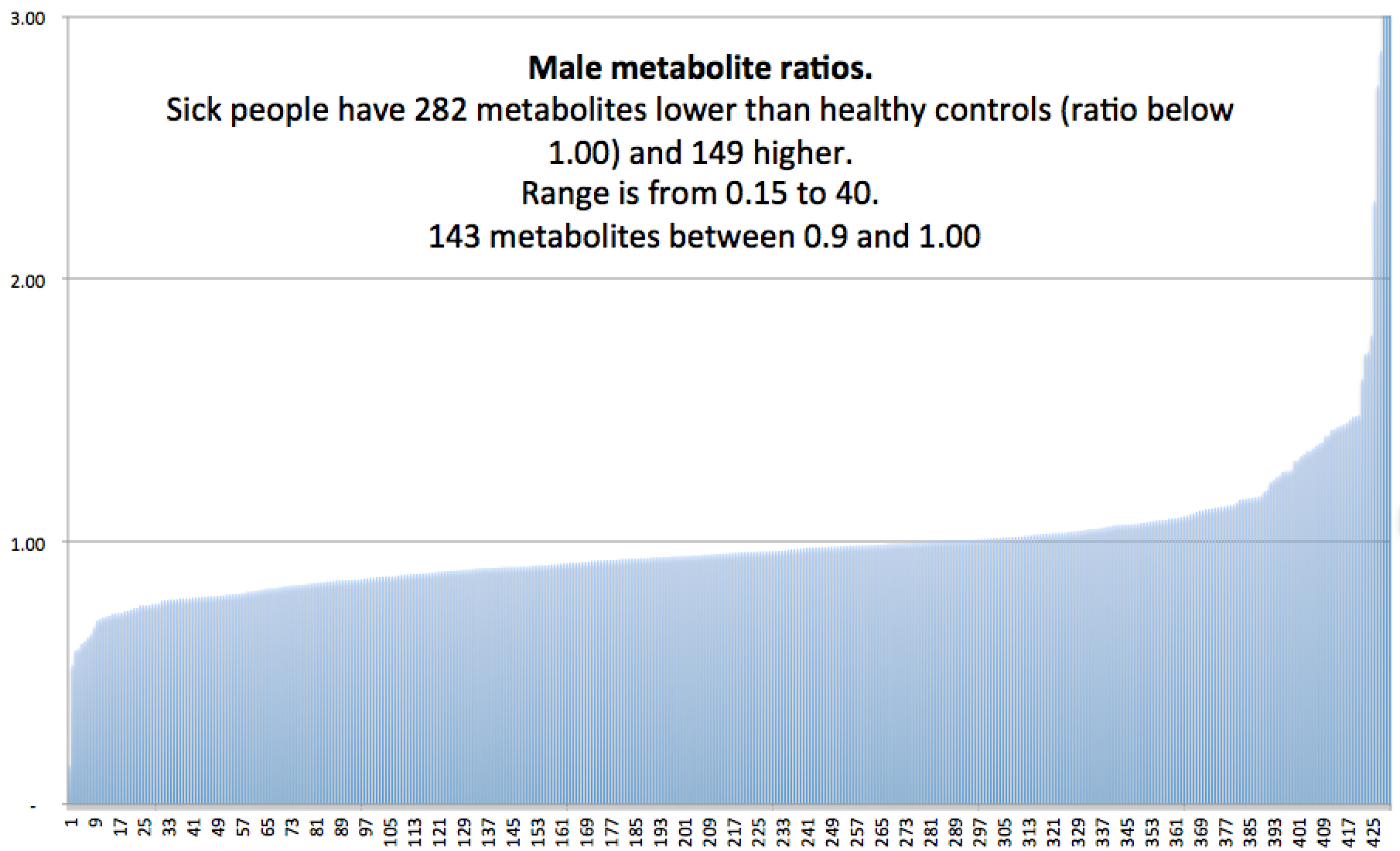 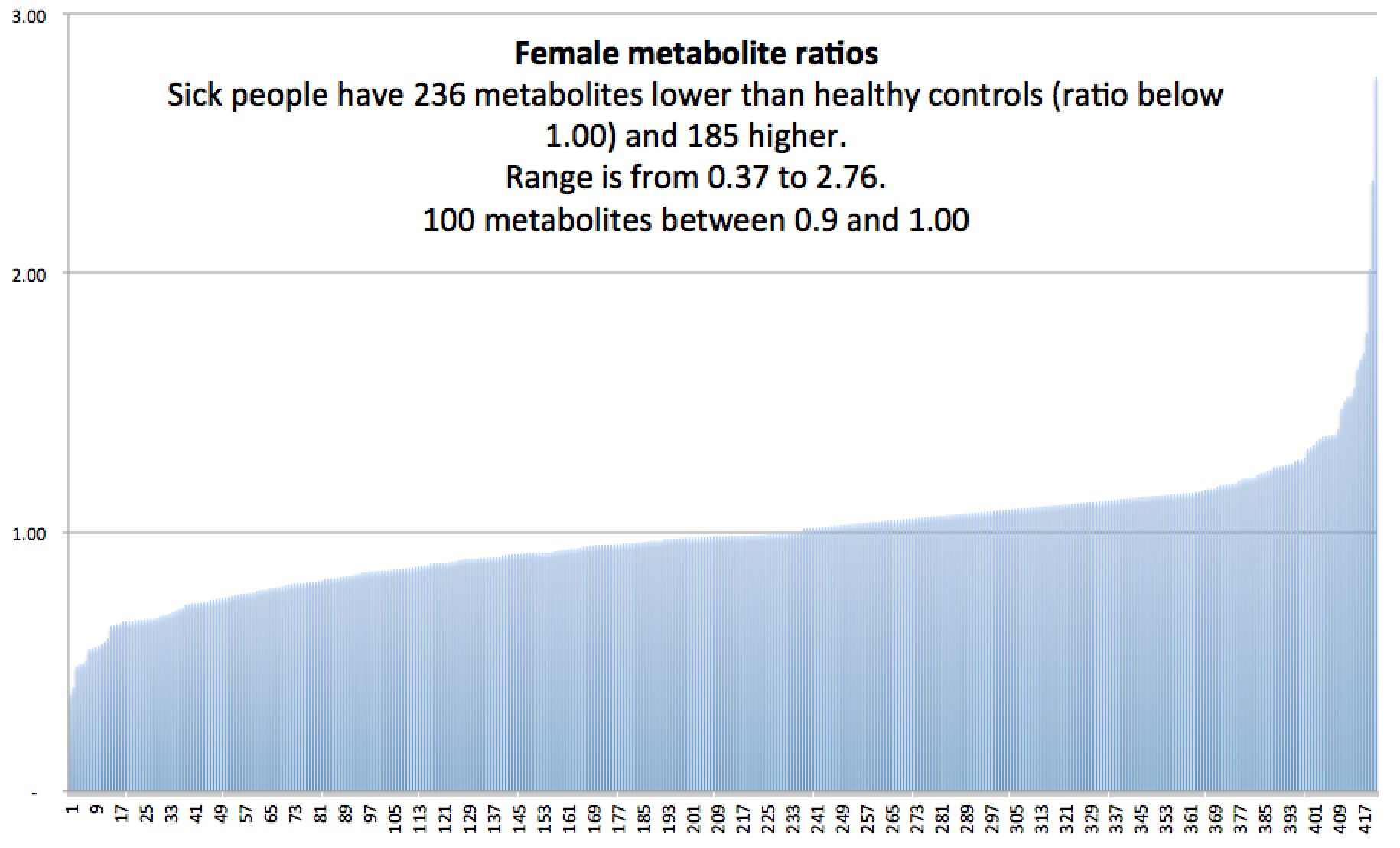 [Note axis truncation in the male results. The very high result is nicotinamide n oxide, which is all driven by one absurdly large outlier among male patients. Who knows what's going on there. What's especially odd is nicotinamide n oxide drives the lowest result (0.37) in females. It just seems like a non-normally distributed variable.)
Last edited: Jan 2, 2017

I'm a little new here and haven't yet gotten the hang of all the nuances of this site, so please excuse my butting in here like this.

I'd created another thread this week about my experiences with B6 deficiency an the relationship to heme and sphingolipid production and immune function. I was asked to copy what I posted there into this discussion, so here goes... I'll look forward to hearing if you all think this might be important in light of Naviaux's findings...


This describes PLP (P5P or B6) and it's importance in sphingolipids and immune function.

I extracted this from the PDF:

Reduced availability of PLP is associated with reduction
in several components ofthe immune response, includ-
ing significant decreases in lymphocyte numbers, espe-
cially T-helper cells and IL-2 production in humans.6
Lymphocytes isolated from vitamin B6-deficient subjects
also show reduction of lymphoproliferative responses to
mitogens that activate both T and B cells when grown in
a culture medium containing adequate concentration of
PLP.6 This has been attributed to the lower numbers of
T-helper cells in the lymphocyte population from vitamin
B6-deficient subjects. Maturation and egress of lympho-
cytes, especially T-cells, from thymus and lymph nodes
relies on the gradient of sphingosine-1-phosphate (S1P).
PLP-dependent enzymes play a major role in the synthe-
sis and breakdown of S1P, which is a potent metabolite
that regulates inflammation and immune response pro-
cesses such as cell growth, survival, differentiation, lym-
phocyte trafficking, vascular integrity, and cytokine
and chemokine production.58,59 PLP is required for the
activity of serine palmitoyl transferase that catalyzes the
condensation of serine and palmitoyl CoA into 3-keto-
dihydrosphingosine, which is then converted to S1P
in a series of reactions.58–60 PLP is also a cofactor for
sphingosine-1-phosphate lyase, which irreversibly cleaves
S1P to regulate its concentration.58,59,61 A gradient of S1P
is required for lymphocyte egress from thymus and
peripheral lymphoid organs, which is maintained by S1P
lyase.62 Administration of vitamin B6 antagonist 4’ deoxy-
pyridoxine interferes with the S1P gradient, results in
accumulation of mature lymphocytes in the thymus, and
depletes B- and T-lymphocytes from lymph causing lym-
phopenia.62 These conditions can be reversed by provid-
ing excess vitamin B6 in the diet.62 During inflammation,
S1P concentration increases in the inflamed peripheral
tissues,63 which functions as a chemoattractant for the
inflammatory cells.
One of the intermediate products during the synthe-
sis of S1P from 3-keto-dihydrosphingosine is ceramide,
which plays an important role in inflammatory processes.
Ceramide functions as a second messenger mediating the
effects of tumor necrosis factor-a and interferon-g on
programmed cell death and regulating senescence.64,65 An
increase in cellular ceramide concentration is observed in
cystic fibrosis, experimental autoimmune encephalomy-
elitis, and diet-induced insulin resistance, all of which are
marked by chronic inflammation.66–68 The importance of
ceramide in these diseases is demonstrated by the fact
that manipulation of ceramide concentration via inhibi-
tion of serine palmitoyl transferase or mutation of sph-
ingomyelinase, reverses the pathology of the disease.66–68
Ceramide-1-phosphate, which is derived from ceramide,
activates mast cells that mediate inflammation.69
Thus, it is possible that is a higher demand exists for
PLP during inflammation due to the role of PLP in the
synthesis of S1P and ceramide, and maintenance of S1P
gradient.

i meant to post the following on this post but did so by mistake in another thread.
There has been new correspondance in PNAS for Naviaux et al:

A commentary from Roerick et al. (Including van der Meer) has been published here

Kati said:
i meant to post the following on this post but did so by mistake in another thread.
There has been new correspondance in PNAS for Naviaux et al:

A commentary from Roerick et al. (Including van der Meer) has been published here

There is a new reply from Dr Naviaux to their comment on the PNAS website. You can access the response here.
Click to expand...
Naviaux certainly knows how to reply, I'll give him that.

Thank you @Kati. This is really good to have as I have seen similar criticism here on forum and elsewhere online, and I didn't feel nearly equipped to even begin answering them.

I just found a paper :


Microglial activity in people at ultra high risk of psychosis and in schizophrenia; an [11C]PBR28 PET brain imaging study

They used the following method to test for elevated microglia activity in the brain:


"Elevations in microglial activity can be measured in vivo with positron emission tomography (PET) using radioligands specific for the 18kD translocator-protein (TSPO), which is expressed on microglia (14). Investigations using the first generation radiotracer (R)- [ 11C]PK11195 have revealed an increase in TSPO binding in medicated patients with schizophrenia when compared to healthy controls (6, 7). The first investigation of microglia using PET in schizophrenia, in a cohort of 10 patients, revealed a total grey matter elevation of microglial activity in the five years following diagnosis (6). The most recent investigation in seven chronically medicated patients with schizophrenia using (R)-[11C]PK11195 demonstrated an elevation in hippocampal binding potential and a non-significant 30% increase in total grey matter binding potential (7)."

Just wondering if any of the ME CFS researchers have used this method?

There has been a 'correction' posted on the PNAS website which reads as following:

The editor, R.W.D., wishes to note that he has consulted with R.K.N. with respect to R.W.D.’s son’s metabolism and with E.G. with respect to R.W.D.’s son’s care. These consultations played no role in the work or the editing of this paper. R.W.D.’s son was not a subject in this study. After this research study was completed, written, and edited, R.W.D., as chair of the Open Medicine Foundation (OMF) Scientific Advisory Board, asked R.K.N. to join the board and began collaborating with him and E.G. on follow-up studies related to this work. Thus, R.W.D. now has a professional relationship with R.K.N. and E.G. The OMF provided a grant to R.K.N. to support the follow-up studies. The OMF and R.W.D. played no role in the work described in this paper.
Click to expand...
Link: http://www.pnas.org/content/early/2017/04/18/1703858114.full

If only such frank disclosures were made by all researchers.
S

I really should see if I can get a chance to get in some shop talk with the Naviaux lab now that I'm relocated to San Diego. I'm impressed by their transparency and professionalism.

Forbin said:
My uneducated guess is that this chronically reduced metabolic rate at the cellular level is not simply a case of being stuck in the "low" position. Rather, it's driven by another chronic process that won't resolve, like an infection or autoimmunity, or an alteration in the microbiome (perhaps initiated by an infection), and one or more of those things is leading to chaos at the cellular level. Fix the problem upstream and, hopefully, the cellular metabolism will return to normal.

At the moment, at least, I think the real importance of this finding is in its diagnostic value as a biomarker. That in itself is HUGE.
Click to expand...
I am just now reading this string, and I LOVE what you are proposing, Forbin. Because with me, this ALL started with an acute mold inhalation. And I'm part of 24% of the population that needs extra help getting the mold out of me. So all I can do is HOPE that as I get it out, I "might" return to normal...or at least be better than I am now.
J

For anyone waiting to hear news about the replication study it looks like it's been delayed again.
It was tentatively scheduled to be published 'this fall' and then 'late this fall' but it's now early next year.
I was hoping for an early Christmas present.

We expect to publish the study sometime in late 2017.
Click to expand...
J

hixxy said:
@John Mac It says 2018 in the title but still says 2017 in the body of the article.
Click to expand...
Yes I took it that they edited the title to reflect the delay. I remember the fall being the original timescale and then remember seeing the late fall being an update.
Z

Mel9 said:
Just wondering if any of the ME CFS researchers have used this method?
Click to expand...
Hi...see study in japan from 2014...however small sized study..they used PK11195 during Petscan..neuroinflamm. was reported.

Now, sept 2017, they started on replicating finding in bigger cohort of me cfs patients. And they us [11C]PBR28.

Now, sept 2017, they started on replicating finding in bigger cohort of me cfs patients. And they us [11C]PBR28.
Click to expand...
Thanks, I've been waiting for the larger study with the new tracer [11C]PBR28. Taken longer than I hoped to get this second study commenced.
You must log in or register to reply here.
Share: Facebook Twitter Reddit Pinterest Tumblr WhatsApp Email Link