Jen Brea on whether some of us might be mis-diagnosed EDS patients.

For the t
Murph said:
Are a subset of us members of a lost tribe?

Everyone keeps telling me I have Ehlers-Danlos Syndrome (EDS) even though I don’t meet the criteria. What might this mean for me and for (some) ME patients?
[IMG]https://cdn-images-1.medium.com/fit/c/100/100/1*1yuLH0qLy0TZb9bBcZBGRQ.jpeg[/IMG]

A little over a year and half ago, I received an email from a neurosurgeon who had watched my TED Talk. He has a subspecialty treating patients with Ehlers-Danlos Syndrome (EDS) and shared with me an observation both tantalizing and maddening: “Many of my EDS patients, after a severe infection, develop exactly your symptoms, Jen.” Tantalizing because through my advocacy for Myalgic Encephalomyelitis (ME) and the making of my film, Unrest, I met countless people with EDS, a disease that prior to getting sick I’d never even heard of. Maddening because the last thing I wanted to do at the time was open up a whole other door of potentially overwhelming possibilities.

A lot has happened to me since then. That door threw itself wide open, whether I wanted it to or not. I had my thyroid removed for cancer. That surgery led to a severe worsening of my undiagnosed craniocervical instability (CCI); I suddenly developed central apnea (I’d stop breathing for 15–45 seconds at a time, over and over and over again) and all my neurological symptoms got worse. I got diagnosed with CCI, had a craniocervical fusion to stabilize my neck, and was then diagnosed with a hematoma and tethered cord in my lumbar spine, leading to two more surgeries.

All told, July to January I had five surgeries and was under anesthesia eight times. It’s been hell but it’s also taken me to places I never imagined. In the process, I’ve learned a tremendous amount about the specific, concrete mechanisms and abnormalities underlying my illness. (That’s the thinest silver lining I’ve ever put on a tough experience, but I’ll take what I can get!)
A few weeks ago, I wrote to update the neurosurgeon on my progress (he was not the surgeon who performed my recent craniocervical fusion and tethered cord release surgeries). When I described my initial response to surgery and current symptoms, as well as my new diagnoses, he told me “almost every EDS patient that I have spoken to that has gone through what you have says very similar things.”

“You almost certainly have EDS,” he said.
For the last seven years I’ve been living and fighting with a diagnosis of Myalgic Encephalomyelitis (commonly called, although hopefully that sun is setting, “Chronic Fatigue Syndrome”). That diagnosis was absolutely correct. However, in the last year, I’ve also been told so many times by EDS or EDS-adjacent doctors that I have EDS, it is now being written down regularly on my medical charts or dropped in casual conversation, even though I have never been formally diagnosed. 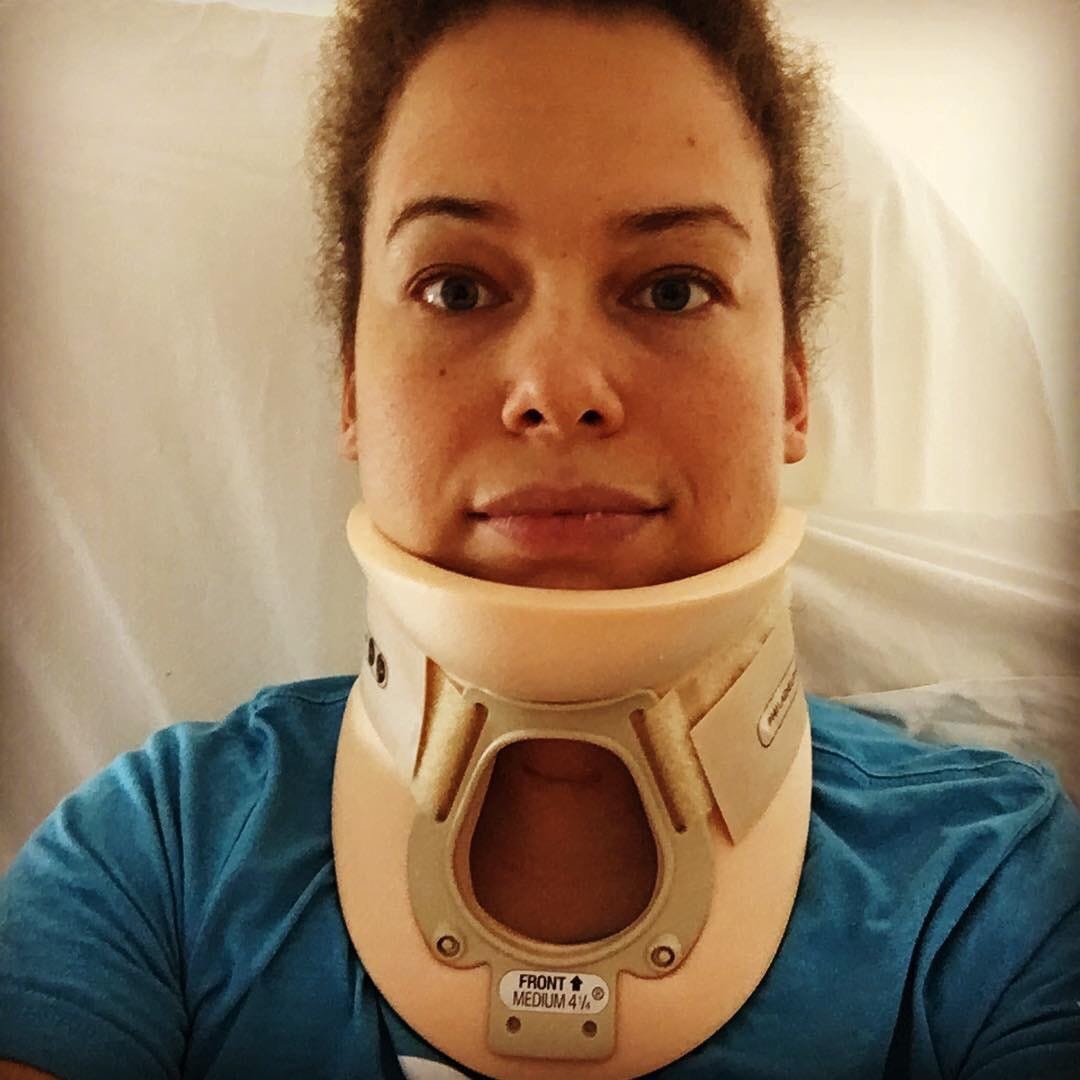 At first I was annoyed and tried to correct this assumption at every turn. After all, I haven’t had the genetic testing for EDS. I don’t seem to have the symptom profile of any of the 12 types for which there is a genetic test and Hypermobile EDS (hEDS) doesn’t have a gene marker. (Like ME, it is diagnosed clinically, but via criteria comprised primarily of objective signs.) Squint and I look like a lot like people with hEDS, namely because I share so many of the common comorbidities and complications associated with it: craniocervical instability, tethered cord, postural orthostatic tachychardia syndrome and mast cell activation syndrome. The only catch is that other than at my craniocervical junction, that region where skull meets spine, I’m not really hypermobile. I wasn’t hypermobile as a child. Nor am I a “stiff zebra” — a person with hEDS whose joints have stiffened up to try to cope with the instability — inasmuch as prior to surgery, I never had any kind of pain. I don’t meet any of the current, past or proposed diagnostic criteria. And by that I don’t mean that I don’t pass the bar , I don’t even check off any of the boxes. In fact, I am pretty sure I have none of the signs included in any criteria.
I share all this because there are many people in the Myalgic Encephalomyelitis and Chronic Fatigue Syndrome community who are probably in the same boat as me. We meet every diagnostic criteria for ME including the oldest criteria (like Ramsay) and the most comprehensive (like the International Consensus Criteria (ICC)). The majority of us are here in part because we got sick after an infection and post-exertional malaise/neuroimmune exhaustion is one of our most distressing symptoms. However a significant proportion of us probably also have POTS and/or MCAS, co-morbidities so frequently found in the EDS community, they are collectively called the “trifecta.” We may have weird neurological symptoms that do not squarely fit onto any list, and a growing number of us (not without some controversy!) are being diagnosed with craniocervical instability, spinal stenosis or other structural issues — co-morbidites also frequently associated with EDS.
I for one have all reasonable bonafides of an ME diagnosis when it comes to symptoms and lab testing, and was diagnosed by ME specialists. Yet after reading countless journal articles about ME, writing umpteen MEpedia medical and science pages, talking to dozens of doctors and researchers, meeting thousands of patients, and reading more stories of illness and recovery than I can count, I was surprised to find how much of my own case I had managed to miss.
And so I am left with a series of questions with no clear answers that I humbly offer up to ME and EDS researchers and clinicians to help us figure out: