Source: https://en.wikipedia.org/wiki/Baroreflex
Click to expand...
interesting as we can find some studies about baroreflex in Fibro and ME and also a recent article in healthrising about it

The text of the paper is quite good, and mentions ME as a "comorbid and overlapping syndrome".

It presents POTS as a clinical condition, not just a symptom, saying:

Although POTS is characterized by orthostatic tachycardia and orthostatic intolerance, central nervous system (CNS) symptoms, such as headache, fatigue, chronic dizziness, cognitive dysfunction and sleep disturbance, affect a large number of patients. These symptoms are often more disabling and difficult to treat than the hallmark feature of postural tachycardia.
Click to expand...
It also recognizes the critical role of dysautonomia in ME, saying:

Indeed, the autonomic dysfunction is so vital to the pathophysiology of CFS that the presence of orthostatic intolerance has been included as one of the additional diagnostic criteria in the Center for Disease Control case definition of chronic fatigue syndrome.
Click to expand...
Unfortunately, it also mentions:

Additionally, it has been observed that some patients with POTS improve with biofeedback and rehabilitation programs that focus on cognitive behavioral therapy, exercise therapy, group therapy, physical therapy, occupational therapy, guided meditation and yoga [54].
Click to expand...
Here is a figure describing the author's attempt to synthesize the research findings into a hypothetical model: 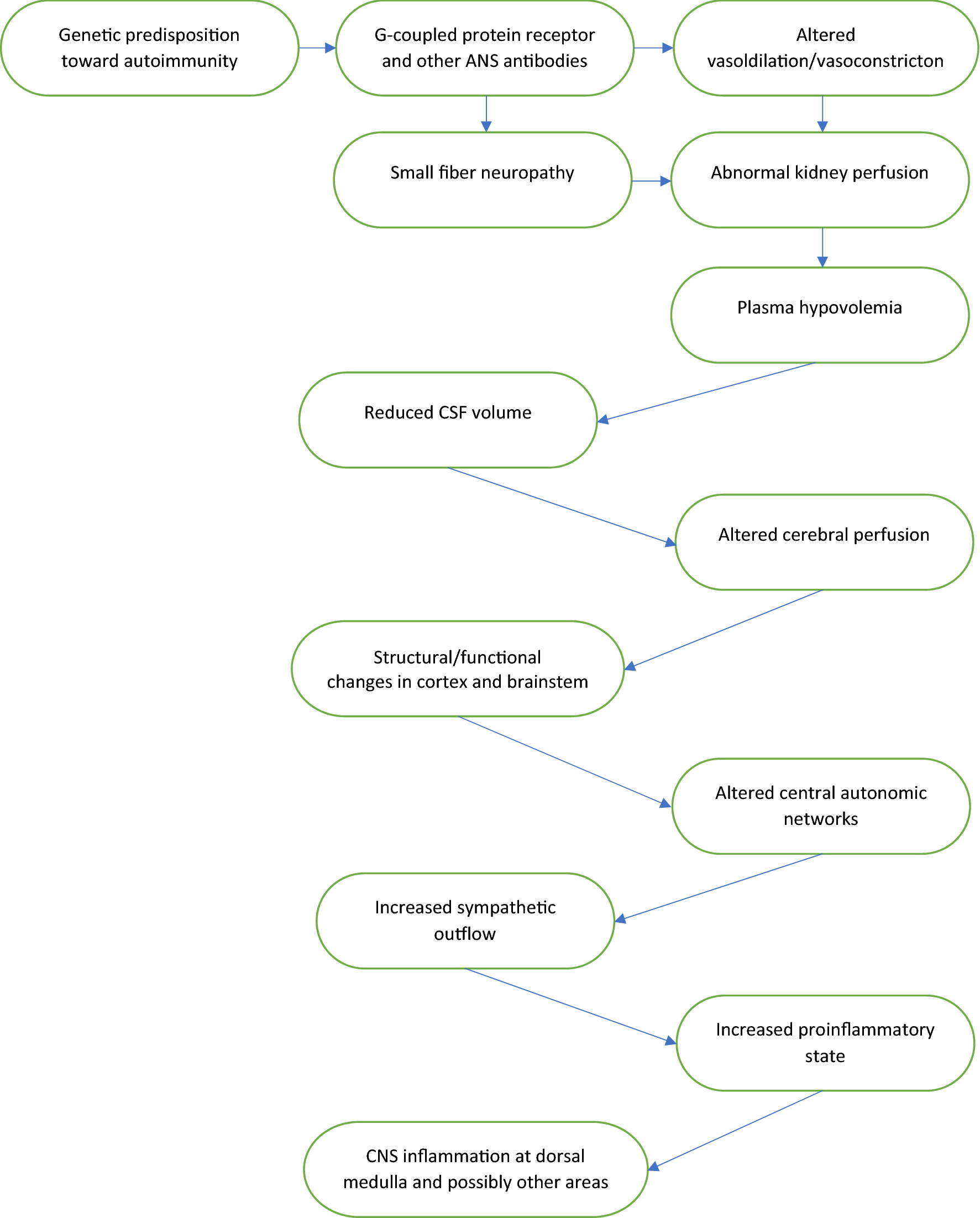 Pyrrhus said:
I say that the tachycardia is a response of the central nervous system, when it is really a combination of both the peripheral and central nervous systems. In fact, it is a well-researched reflex called the baroreflex:
Click to expand...
pattismith said:
interesting as we can find some studies about baroreflex in Fibro and ME and also a recent article in healthrising about it
Click to expand...
Here's a 2003 study by Natelson that found an abnormal baroreflex in ME patients:

Results:
Patients with CFS had a greater decline in baroreceptor reflex sensitivity (BRS) during standing, although only those with severe CFS were significantly different from the controls. Systolic blood pressure declined during standing in the control group but was maintained in the CFS patients. In contrast, the patients with less severe CFS had blunted increases in blood pressure during the speech task, which could not, however, be explained by inadequate inhibition of the baroreceptor reflex, with all groups showing an appropriate reduction in BRS during the task.

Conclusions:
These results indicate that in CFS, deficiencies in orthostatic regulation, but not in centrally mediated stress responses, may involve the baroreceptor reflex. This study also suggests that classifying patients with CFS on illness severity may discriminate between patients with abnormalities in peripheral vs. central mechanisms of cardiovascular stress responses.
Click to expand...
You must log in or register to reply here.
Share: Facebook Twitter Reddit Pinterest Tumblr WhatsApp Email Link