A new EEG publication with eLORETA analysis from Mark and Marcie Zinn (RIP).

Exact low-resolution electromagnetic tomography (eLORETA) allows noninvasive investigation of cortical regions of interest that may contribute to better understanding of the role of the brain disturbances in behavioral manifestations of PEM. This pilot study therefore aimed to use eLORETA to characterize changes in current density in cortical structures related to the CAN following submaximal isometric handgrip exercise in seven patients with ME/CFS and six neurotypical healthy controls (HCs).

Resting EEG was recorded at pre-and post-handgrip, and 24 hours later. Findings showed that significant differences occurred immediately post test, which were most pronounced after 24 hours, particularly in the low alpha (8–10 Hz) and low beta (13–18 Hz) frequency subbands. Together, the present findings offer support for EEG source localization techniques to investigate PEM. If confirmed, this study could provide a useful instrument for aiding functional diagnosis and evaluation of treatment outcomes.
Click to expand...
(spacing added for readability)

Other papers/presentations by Mark and Marcie Zinn:

qEEG / LORETA in Assessment of Neurocognitive Impairment in a Patient with Chronic Fatigue Syndrome: A Case Report (2016)
https://forums.phoenixrising.me/thr...itive-impairment-in-a-patient-with-cfs.42820/

EEG studies in ME have had a hard time documenting specific abnormalities. But one study noted that "In the eyes closed condition, peak alpha frequency (the frequency between 8 to 13 Hz at which the greatest amount of energy was observed) correlated negatively with the 'fatigue today' rating." This means that patients who reported more fatigue had slower alpha-frequency waves.[1] And a 2014 conference presentation "found decreased [peak alpha frequency] over 58% of the entire cortex in CFS patients when compared to controls. [...] These findings are consistent with reduced efficiency of thalamo-cortical connections in CFS participants." [2]

For those interested, here is one of the earliest papers that established a link between the speed of thalamo-cortical oscillations and attention or information processing:
EEG-alpha rhythms and memory processes (Klimesch, 1997)
https://pubmed.ncbi.nlm.nih.gov/9203012/
The author's later work expands on how thalamo-cortical oscillations are involved in both attention/concentration and in information processing/retrieval:
https://www.cell.com/trends/cognitive-sciences/fulltext/S1364-6613(12)00243-4
Click to expand...
Pyrrhus said:
References
[1] https://www.tandfonline.com/doi/abs/10.1300/J184v02n02_04
[2] https://forums.phoenixrising.me/thr...udy-presented-at-stanford.32919/#post-2355997
Click to expand...
W

That's the kind of research I've been hoping for: revealing (hopefuly) consistent abnormalities in brain function in ME or PEM. The problem may be in getting a larger study, since the research community seems to avoid following up on other people's studies.

Zinn et al 2021 said:
Recent studies have demonstrated a need for understanding the effects of physical activity on neurological processes in ME/CFS, specifically the central autonomic network (CAN) that controls the peripheral autonomic nervous system (ANS).
[...]
Numerous clinical conditions include fatigue as part of their etiology (Ropper & Samuels, 2009) and the symptom sequelae of postexertional malaise (PEM) are widely recognized as the most debilitating and unrelenting feature of ME/CFS.
[...]
The ANS, in coordination with the neuroendocrine system, regulates the cascading physiological events which serve as primary mediators of stress and arousal (McEwen et al., 2015). Operating synergistically with the CNS, the ANS promotes physiological stability through adaptive response to ever-changing internal and external demands.
[...]
The CAN is a set of interconnected regions involved in top-down homeostatic control (Benarroch, 2012; Mo et al., 2019) of the peripheral ANS in coordination with intricate neuroimmune responses (Benarroch, 2019; Morrison & Nakamura, 2019) and arousal responses (Saper, 2002), emphasizing its potential importance in ANS-related disease.

The structures of the CAN were recently confirmed in a comprehensive meta-analysis of 43 task-based studies using the activation likelihood estimation (Turkeltaub et al., 2002), a widely used technique for showing the convergence of activated brain areas across different experiments.

The present study examined the cortical regions of the CAN using exact low-resolution electromagnetic tomography (eLORETA), an inverse solution that estimates cortical current density from EEG signals recorded at the scalp.
[...]
The main objective of this pilot study was to quantify the effects of physical exertion on CAN function in ME/CFS using an isometric handgrip task.
[...]
Resting-state qEEG data were collected from all participants during 3 separate time points: 1) before handgrip, 2) immediately after handgrip, and 3) 24 hours later. Thus, the discrepancy between CAN function at pre vs. posthandgrip exercise was used to quantify PEM.
[...]
The principal finding was a significant time and frequency-dependent pattern of CAN perturbation in the patient group, relative to the HC group. Baseline current density in the patient group was significantly lower in the Alpha and Beta frequency bands, but marginally higher in the Delta band.

After 24 hours, however, the difference between groups became more pronounced.The ME/CFS group showed a greater reduction in current density whereas the HCs had further increased across all frequency bands.
[...]
Together, these results are consistent with the characteristic stamina loss and behavioral worsening of symptoms in PEM after 24 hours and they extend previous investigations showing aberrant CNS signaling followed by fatigue-inducing voluntary motor tasks.
[...]
However, this was a pilot study intended to provide groundwork for a larger scale study without sample size limitations. Thus, given the small sample size of each group, the differences found here must be interpreted with caution.
[...]
We recognize that eLORETA source estimations are restricted to cortical regions of interest and several subcortical regions of the CAN (thalamus, red nucleus, cerebellum) were excluded from the analyses.
Click to expand...
(spacing added for readability) 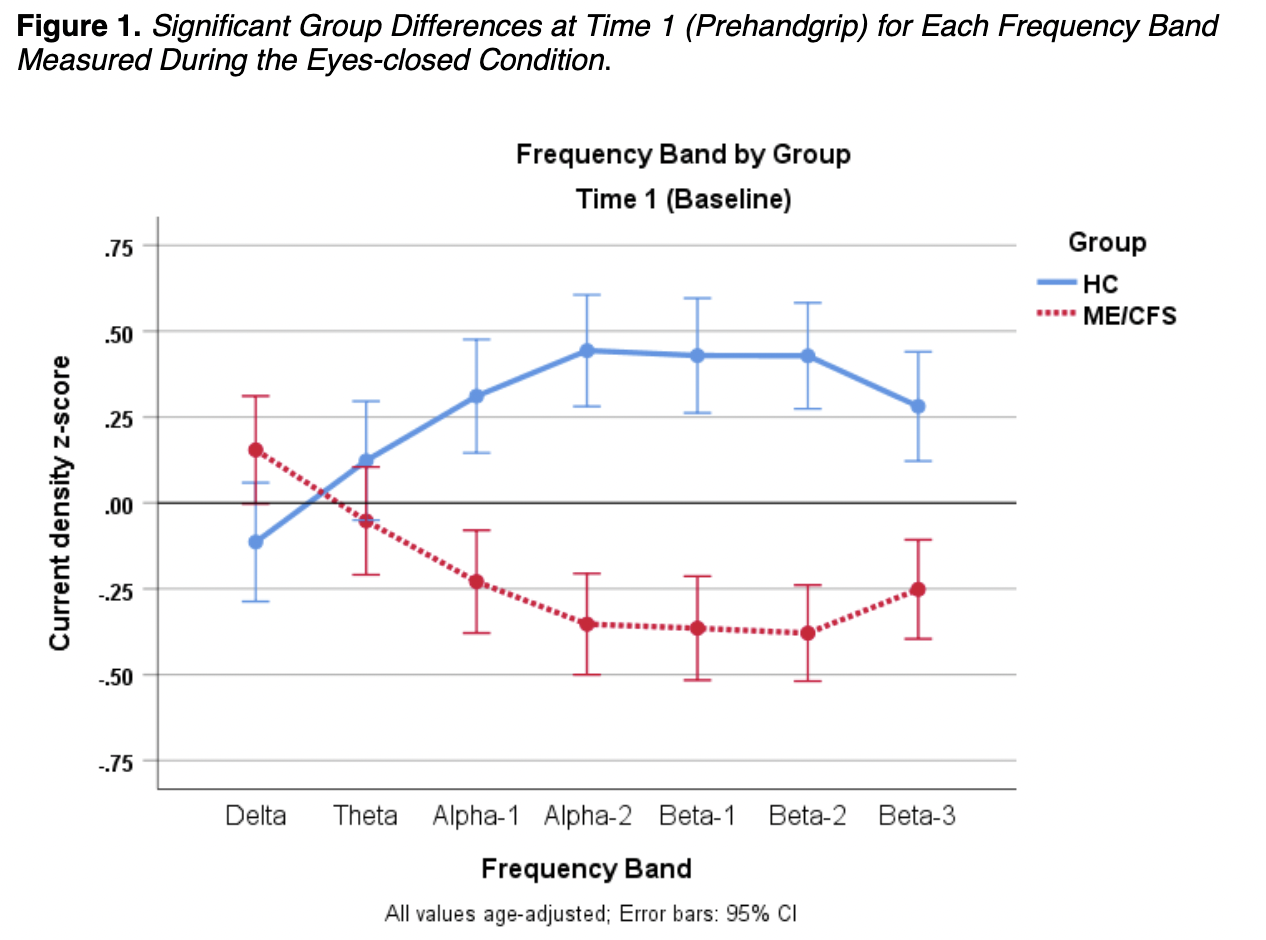 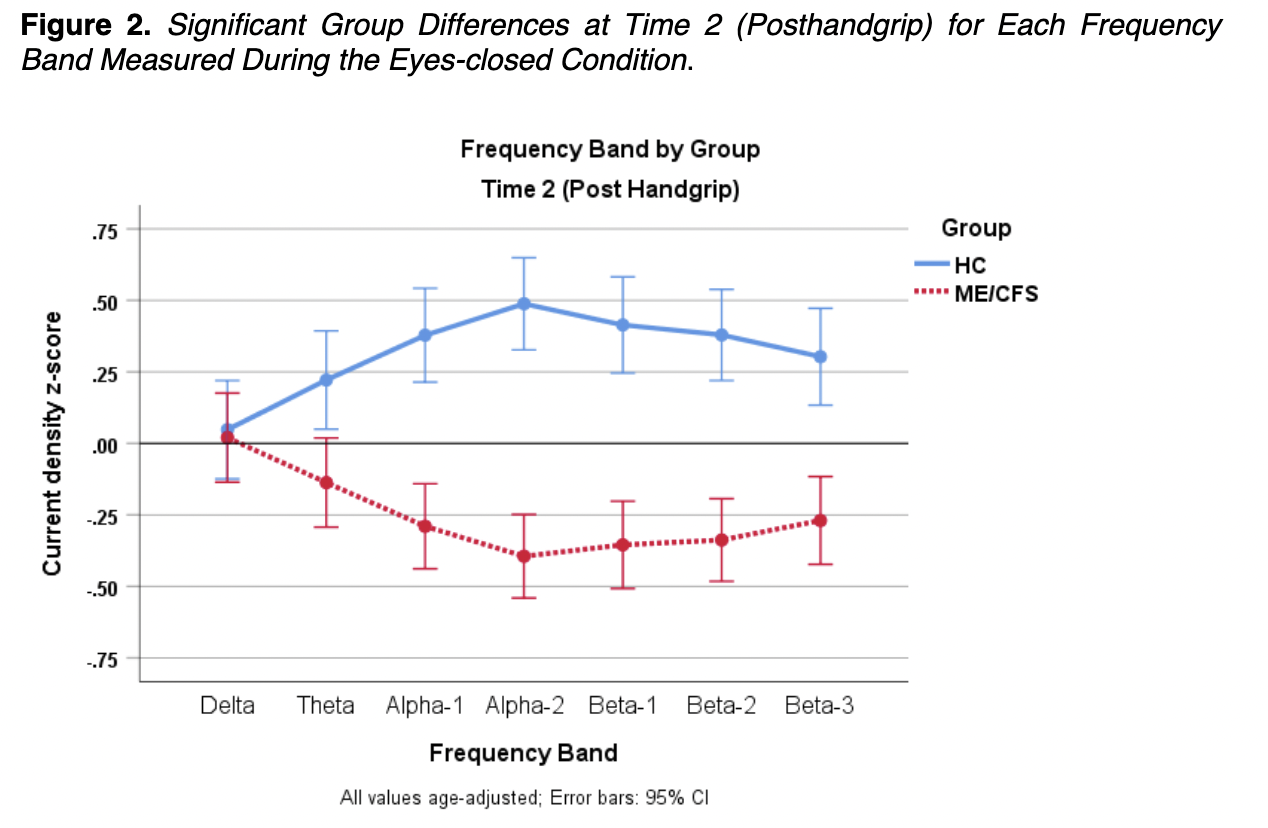 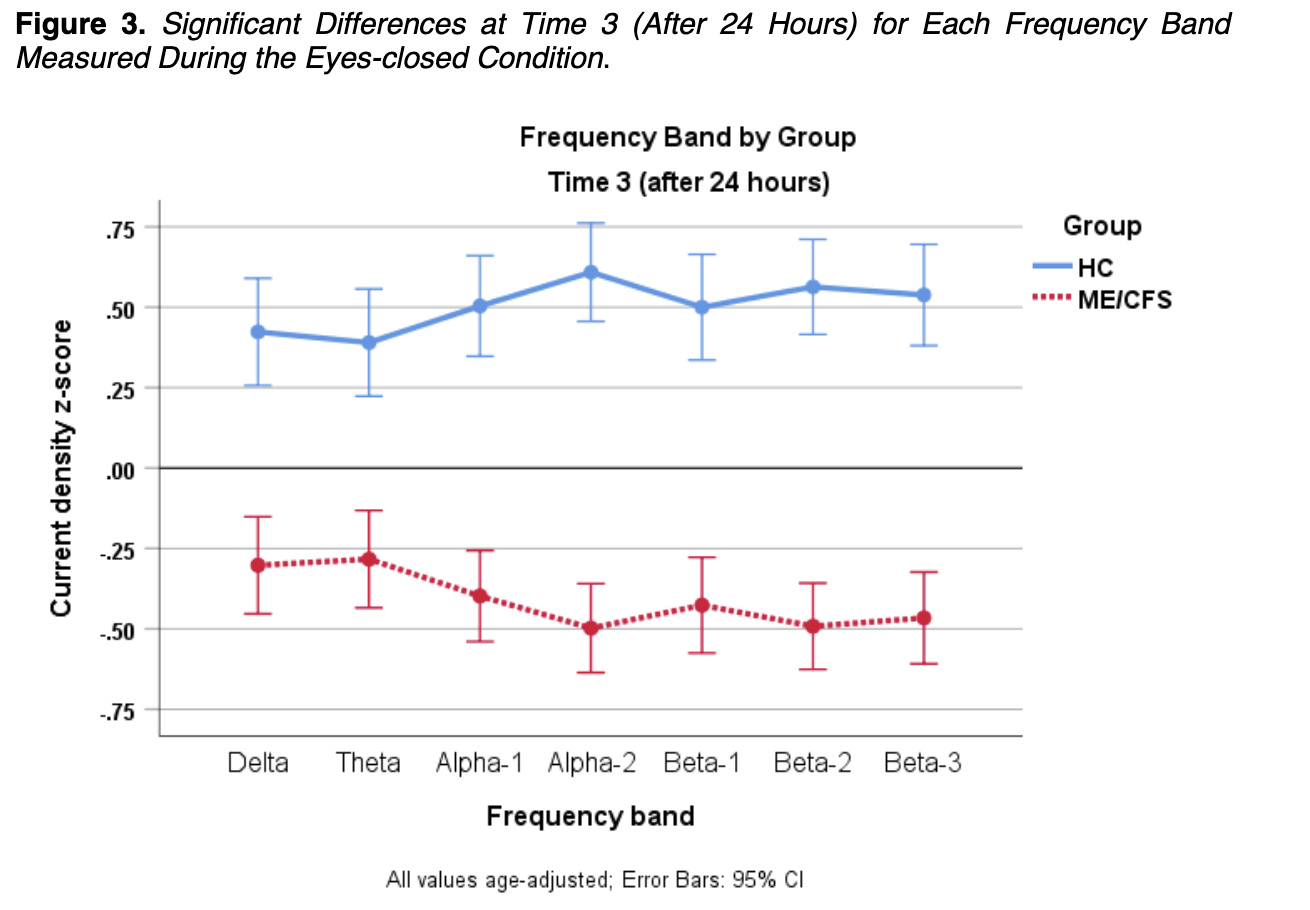 Oh good, I found this thread. I am hoping the hand grip/qeeg method will be enough to confirm PEM. Can be an alternative to 2 day CPET?

SnappingTurtle said:
Oh good, I found this thread. I am hoping the hand grip/qeeg method will be enough to confirm PEM. Can be an alternative to 2 day CPET?
Click to expand...
I believe this study tried to answer that question:

This study is discussed by the author in this interview: