Extracellular Vesicles and Micro-RNAs in ME/CFS
A Conversation with Dr. Elisa Oltra and Dr. Jesus Castro
​
By Eric Pyrrhus
March 31, 2021 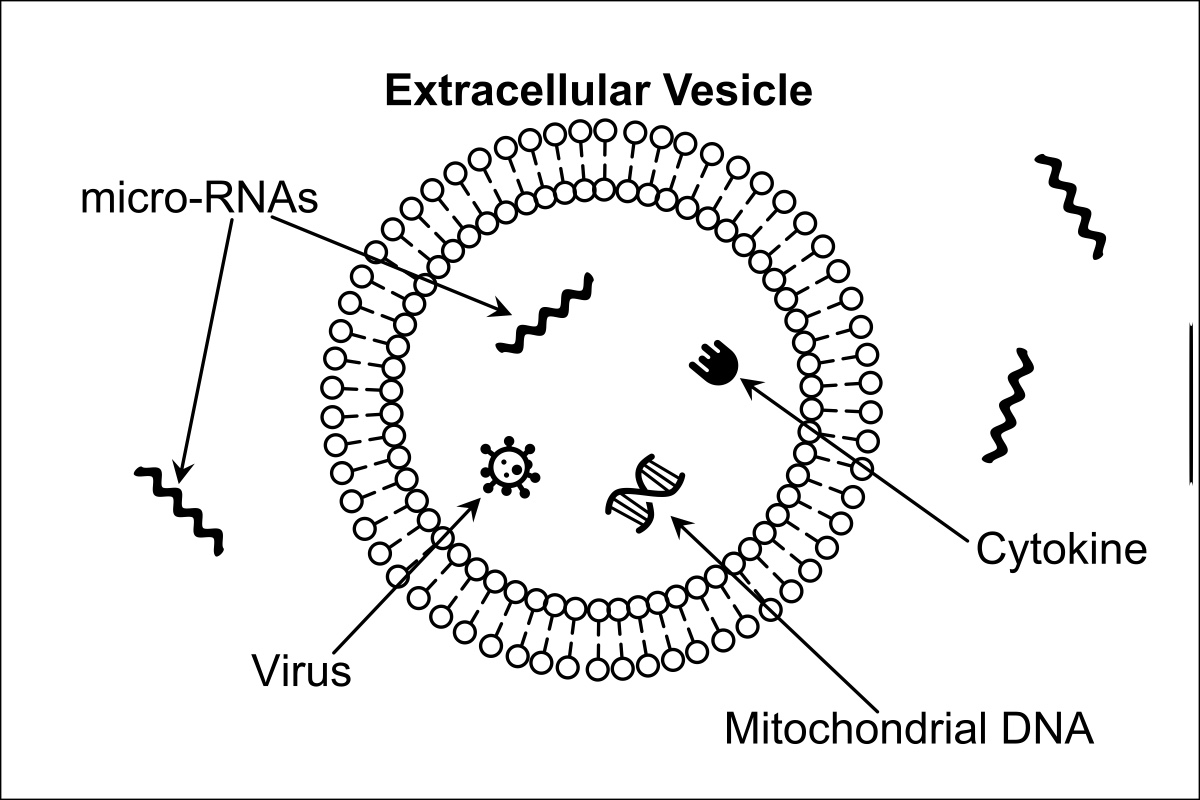 A vesicle is like a microscopic bubble, surrounded by a fatty membrane and filled with water and biological particles. An extracellular vesicle, abbreviated EV, is any vesicle that is found outside cells in the body. They can be found floating around in blood or in any other fluid from the body's tissues.

A lot of research on extracellular vesicles specifically look at a small type of extracellular vesicle called an "exosome." An exosome is formed from cells through a special process, and is thought to be a way of transferring biological particles from one cell to another.

One of these biological particles is called micro-RNA, abbreviated miRNA. A micro-RNA is made by a cell to suppress the production of a specific protein, and is one of the ways that the cell fine-tunes its current level of proteins. Sometimes, a cell will release its micro-RNAs to be picked up by neighboring cells, with the micro-RNAs either inside an exosome or floating free.

Although we don't yet completely understand the role of micro-RNAs, some researchers have found that certain micro-RNAs may be correlated with core symptoms in certain illnesses. In fact, a 2012 study looked at the micro-RNAs inside blood cells as a potential biomarker for ME/CFS.

Two experts, many years of research 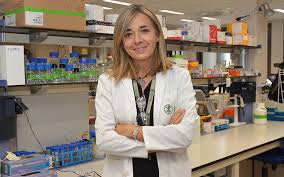 In 2016, she was awarded funding from the U.K. ME Association to study micro-RNAs and extracellular vesicles in ME/CFS, and she presented results of this research at the 2018 Biomedical Research into ME Colloquium, sponsored by Invest in ME.

Dr. Oltra's research led to a 2020 publication that raised the possibility of using specific micro-RNAs, some found inside extracellular vesicles, as a diagnostic test for ME/CFS.

In addition, she has recently been awarded funding from ME Research U.K. to study epigenetics and the role of Human Endogenous Retroviruses (HERV) in ME/CFS. 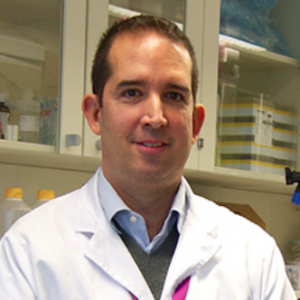 As part of his work, he co-authored a 2013 in-depth characterization of lymphocyte numbers and function in ME/CFS. He also published a 2013 study comparing mitochondrial function in fibromyalgia and ME/CFS.

In 2016, he published the positive results of a randomized controlled trial on the effect of Coenzyme Q10 plus NADH supplementation on maximum heart rate after exercise testing in ME/CFS.

In 2020 he also contributed to a study of the cytokines found inside extracellular vesicles of people with ME/CFS, during his stay in Dr. Maureen Hanson's lab (Cornell University, Ithaca, NY, USA).

Both Dr. Elisa Oltra and Dr. Jesus Castro contributed to a 2020 publication which studied the effect of exercise, nutrition, and gender on the micro-RNAs of people with ME/CFS.

"There are loads of information ready for us to discover."
- Dr. Jesus Castro
​
Phoenix Rising:

Why are extracellular vesicles currently such an exciting topic of research?

Extracellular vesicles (EVs) are biological nanoparticles of a broad range of physical properties and biological origin, and include exosomes, ectosomes, microvesicles, microparticles, oncosomes, and apoptotic bodies. There are loads of information ready for us to [discover].

The broad scope of information that can be obtained from their study, and their potential applications in medicine, placed them in the agendas of many curious researchers globally. The International Society for Extracellular Vesicles (ISEV) was founded in 2012 in Sweden for the [advancement] and regulation of extracellular vesicle research globally.

GEIVEX is a working group of Spanish researchers specialized in the field of extracellular vesicles.

We, in fact, [have] a local association which organizes workshops for student training and other related activities in Valencia, Spain: Valensicles. The Catholic University of Valencia is an active member of Valensicles.

What do we know so far about blood-borne extracellular vesicles and what are the biggest questions we still have to answer?

Because of their involvement in many physiological processes, EVs hold enormous potential as diagnostic biomarkers and therapeutics in health and disease. Our lab is trying to identify novel biomarkers in EVs (exosomes) following a two-day consecutive CPET from people with ME/CFS and Fibromyalgia.

In numbers, blood-borne EVs come mainly from platelets. This is the reason for preferentially using [platelet-poor] plasma, rather than serum, as the fraction to study disease biomarkers.

EVs present in blood come not only from blood cells, but also from all other cells in the body, gut microbiota included, allowing [us] to interrogate the whole [organism's] performance rather than [just the] immune system's only.

Caution should be [exercised] as the presence of large amounts of platelet-shedded EVs could hamper the identification of relevant, though minor, sets of EVs. This becomes a [highly] relevant issue, particularly in the study of complex diseases such as ME/CFS and fibromyalgia.

We still do not [have] proper tools to selectively separate EVs according to tissue or cell origin, neither [do] we know the particular significance of the varied EV surface markers [or the EV] contents. In research, descriptive characteristics precede functional studies, and we are still at the first stage, with little information on the second.

How can micro-RNA profiles help in diagnosing fibromyalgia or ME/CFS?

Micro-RNAs (miRNAs) constitute a group of small regulatory molecules that epigenetically control gene expression. With almost 3000 different sequences described in human, their levels dictate the pool of proteins in a cell at a given moment.

As their number is still under 10% of the number of genes encoded in the human genome (about 30,000), a complete genome-wide micro-RNA screen requires lower efforts without compromising full interrogation of cellular processes.

In disease, physiologic miRNA levels are altered, and so is gene expression. Fibromyalgia and ME/CFS are simply becoming part of the long list of diseases that present with profiles of miRNAs of potential diagnostic value.

miRNAs are not only present intracellularly. They are also present free in body fluids or packed in EVs, and thus their profiles in blood or other body fluid fractions may provide minimally-invasive liquid biopsy diagnostic methods.

What are the challenges of performing scientific research on ME/CFS and fibromyalgia in Spain?

I believe that we have the same challenges in Spain as elsewhere. We have strong groups of patients, organized, motivated and very active helping us around, but we need recognition first, so that policymakers and research funders finally put in money for research. Mostly because good research and important results are exactly what will help us gain the recognition these diseases and patients with these diseases need.

Here you have two questions in one. The challenge of performing scientific research in Spain in general is limited by the budget of the government, quite below other European countries. The challenge for studying ME/CFS and fibromyalgia derives from the [long-lasting] stigma [associated] with these diseases globally, which adds to the previously mentioned budget shortage.

I must add, though, that both scenarios seem to be slowly improving, despite the pandemic during the last year, which sets higher hopes for the upcoming years.

Thank you both for taking the time to explain these exciting, but complex, fields of research.


Eric Pyrrhus is a scientist with an interest in flaviviruses, coronaviruses, and imaging technology. With undergraduate training at Columbia University and the University of Pennsylvania, and graduate training at U.C. Berkeley and UCSF Medical School, he has studied biomedical sciences, bioinformatics, biomedical imaging, biosensors, computer science, artificial intelligence, and business administration.
Last edited: Apr 1, 2021