Dark side of Antioxidants

Taken together our data indicate that the antioxidants increased severity of peritonitis via decreasing the phagocytic efficiency, oxidative burst, TNF- alpha production and increasing neutrophil infiltration.

Based on these results we propose that antioxidant supplementation during the course of bacterial infection is not recommended as it could be detrimental for the host. Besides, the present study underlines the importance of timing and context of antioxidants administration as opposed to indiscriminate usage to gain best possible therapeutic advantage of these redox compounds. 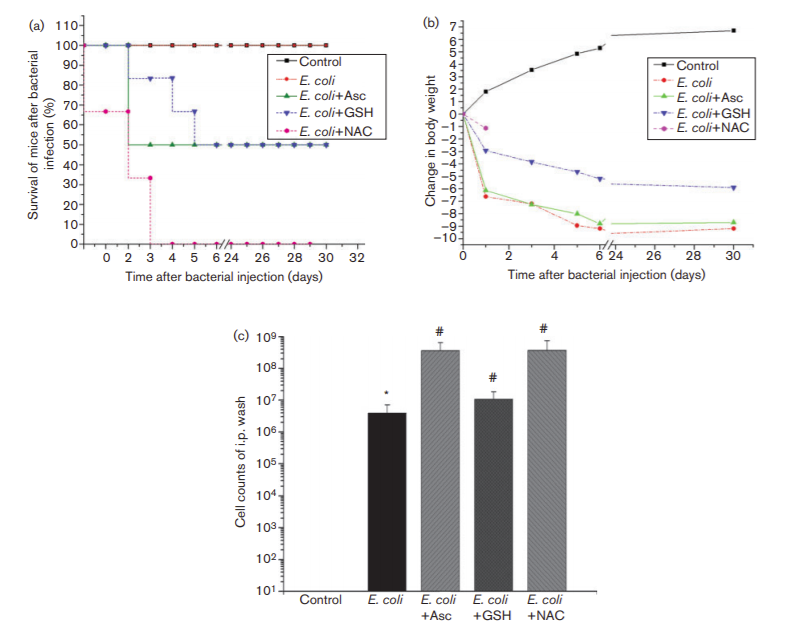 ^
Survival, body weight and peritoneal bacterial load after antioxidant administration in peritonitic mice. (a) Survival of the mice given different treatments over a period of 30 days. The mice were challenged with ~3108 E. coli cells and 500 mg (kg body weight)”1 of one of the antioxidants (GSH/Asc[ascorbic acid]/NAC) through the i.p. route (n56 mice per group). (b) Changes in body weight of the mice during 30 days after injection of E. coli and one of the antioxidants (n56 mice per group). Each data point represents mean±SEM. (c) Changes in peritoneal bacterial load of mice subjected to different combinations of E. coli and antioxidant treatments (n54 mice per group). *P,0.05 compared with the control; #P,0.05 compared with the E. coli-treated group.

Upon exposure to bacteria, phagocytes produce high levels of ROS by a process called oxidative burst. The bacteria induced alterations in intracellular ROS levels of murine peritoneal macrophages were measured in the presence or absence of exogenously added antioxidants.
...
The decrease in E. coli-induced ROS production was more prominent in macrophages co-incubated with antioxidants compared with those pre-incubated with antioxidants.
...
The present study conceivably proposes that antioxidant administration in animals with bacterial infection could be harmful for the host physiology. This statement is supported by our data that antioxidant administration caused increased bacterial load in the peritonitic mice, ultimately leading to their decreased survival
...
Thus, the antioxidant-mediated decrease in phagocytosis and oxidative burst would disarm the host immune response and thus contribute to the increased bacterial load, leading to higher host mortality. Our proposal is further supported by an independent recent report showing a curcumin-mediated compromised immunological response against invading pathogens in a murine typhoid model (Marathe et al., 2013).
...
Similarly, increased progression of Chlamydia trachomatis infection in the presence of GSH and NAC has been reported previously (Lazarev et al., 2010). Moreover, the presence of supplementary antioxidants at the site of infection could also interfere with the antibody-mediated bacterial killing via the ozonolysis pathway, thereby inhibiting the formation of neutrophil extracellular traps, which facilitate the clearance of bacterial infection from the host’s body (Brinkmann et al., 2004). However, these propositions are yet to be validated experimentally.
...
On the whole, the results of our present study reveal for the first time that antioxidant administration in animals having acute bacterial peritonitis leads to overall deterioration of host conditions. This is the fallout of antioxidant-mediated modulation of three important immunological parameters involved in antibacterial defence:

(i) phagocytic efficacy and oxidative burst;
(ii) neutrophil infiltration and Gr1 expression;
(iii) expression of CD11b, which is a component of complement receptor CR3.

OK @Oglevod....I didn't read the entire thing, but I've also believed in the common sense approach to things in our lives. Don't chase answers that will take time to recover. In other words, why take double, triple or more the minimum dose of anything in one day? I even question some of the minimum doses? If anything, I fly under the radar and it seems to work.

Personally, I think we pick up more in the way of antioxidants than we think with the many combinations of things that we take, the decent foods that we eat and who knows anymore about them than any medicine? Who's testing? You're the guinea pig.....it's up to each of us to play it safe and let the experts be our guides. Question them if you feel that you're being told to take more than you should have of any one substance....after all, we're the ones being tested on. Good luck with your health & the many questions that go with it. Yours, Lenora.
W

It's good to see some research findings against the marketers' claims that taking large amounts of antioxidants daily is automatically 'good for us'. A hammer is a wonderful tool, but there are tasks where it shouldn't be the automatic tool of choice.
P

I experienced remission from PAD in 2017, starting from 2008 (along with a 60% government certified walking disablity). COPD stage1 was diagnosed in 2012, a year later asymptomatic since. And remaining ME/CFS symptoms (PEM) ceased in 2019. All 3 chronic disease diagnoses usually considered non-reversible by conventional medicine.

All on massive doses of antioxidants, though I don't really consider them that way. Because each of these essential nutrients have much more important and at high enough doses therapeutic actions. My average intakes for the last 12 years: 25 g/d ascorbic acid, 16.000 IU vitamin A, 7.700 IU vitamin D, 21 mg/d K-vitamins, 170 mg/d CoQ10, 640 IU vitamin E (half of it other than alpha-tocopherols and 100 mg/d tocotrienols), 8 mg/d of Astaxanthin, 300 mcg/d selenium and 1.1 g/d NAC. To mention some usually wrongly considered merely as 'antioxidants'.

Of course all oral as an human along with just as important life-style changes, and not periodoneally as a poor lab-mice.

Before starting to supplement comprehensively 12 years ago I suffered numerous infections during my life (tuberculosis, schistosomiasis, spondilodiscistis, hepatitis, malarias, myopericatidis, cysititis, bronchitis). Since Supplementing really only once thypoid fever in India, clearing up after 1 month. But overall the remission from 3 chronic chonditions have been priceless to me.
Last edited: Oct 12, 2020

I remember a video on yt where a doctor said to get SIBO under control before addressing methylation issues with things like B12 and Folate because you're just feeding the bad bacteria that way. It sounds like that is what is happening in this case too.

Everything we eat can become "fertilizer" (his word) for the nasties too. In other words, we need to weed the garden before we put down the fertilizer.

pamojja said:
All on massive doses of antioxidants, though I don't really consider them that way. Because each of these essential nutrients have much more important and at high enough doses therapeutic actions. My average intakes for the last 12 years: 25 g/d ascorbic acid, 16.000 IU vitamin A, 7.700 IU vitamin D, 21 mg/d K-vitamins, 170 mg/d CoQ10, 640 IU vitamin E (half of it other than alpha-tocotrienols and 100 mg/d tocotrienols), 8 mg/d of Astaxanthin, 300 mcg/d selenium and 1.1 g/d NAC. To mention some usually wrongly considered merely as 'antioxidants'.
Click to expand...
Some of them induce antimicrobial/antivaral peptides, others are abxs/immunomodulators. People get lucky sometimes with magic drug or their combinations, but we should look over the whole picture too...
P

uglevod said:
People get lucky sometimes with magic drug or their combinations, but we should look over the whole picture too...
Click to expand...
Especially people. With brains about monitoring lab-testing and the liberty to adjust comprehensive and synergistic strategies. No one lucky magic pill for sure. But understanding, persistance and patience.

Lab mice have none of those faculties, but are at the whim of cruel micromangers without any conscience or circumsight. Right the opposite to a full picture of any individual patient. Just as with conventional medical care in chronic diseases, as my experience with PAD, COPD or ME/CFS showed to me.
Last edited: Oct 12, 2020
You must log in or register to reply here.
Share: Facebook Twitter Reddit Pinterest Tumblr WhatsApp Email Link