Nielk said:
Shouldn't it be the IOM's obligation to disseminate the information?
Click to expand...
No. It was their job to develop a strategy, not implement it.

I stand corrected; the IOM was charged with creating a dissemination strategy - not the action of dissemination.

From the IOM report in the DIssemination Strategy section: ( i had not previously read this section of the report and found some interesting data.

The following quotes attempt to explain skepticism by doctors when it comes to this disease.

As dissemination activities are planned, however, it is also important to recognize the various external environmental factors that may present challenges to dissemination efforts. One of the more concerning of these external factors is the lack of awareness and continuing skepticism among many health care providers of ME/CFS as a legitimate physical illness.
Click to expand...
A study published in 2010 by CDC found that 96 percent of health care providers were aware of ME/CFS and were able to recall accurately some symptoms associated with the 1994 Fukuda definition (Brimmer et al., 2010). Yet the same study also found that a significant portion of providers had doubts and misconceptions about the illness. Some providers still were expressing the belief that “people with [ME/CFS] are just depressed” and 30 to 43 percent link the illness to high socioeconomic status or pre-illness “competitive/compulsive” personality traits. These findings led the authors of the study to recommend that future education efforts for providers address diagnosis and be delivered through venues used by providers as their primary sources of reliable and accurate information. As part of the CDC study, physicians reported that professional journals, the Internet, and continuing education programs were their top three sources for information on ME/CFS. Similarly, a 2011 study found that 85 percent of health care providers still believed the illness was wholly or partially a psychiatric rather than a medical one (Unger, 2011). Numerous studies also have documented skepticism among clinicians about ME/CFS being a distinct clinical entity (Bayliss et al., 2014).
Click to expand...
Other attitudinal barriers include physicians’ low self-efficacy and lack of positive outcome expectancy with respect to ME/CFS. A recent CDC-sponsored Medscape continuing medical education program found that a high percentage of the more than 2,000 respondents were “not at all confident” or only “somewhat confident” about making a diagnosis of ME/CFS (Harmon et al., 2014). In a separate study, almost 70 percent of clinicians who had previously diagnosed patients with ME/CFS still believed the illness to be more difficult to diagnose than other illnesses (Brimmer et al., 2010). Finally, some physicians, despite being somewhat knowledgeable about and believing in the legitimacy of the condition, may not share those thoughts with their patients because of the mistaken belief that giving them a diagnosis of ME/CFS will “inhibit a patient’s motivation to get better” as it prevents them from engaging fully with the existential conditions of their life, which is what they cannot cope with (Brimmer et al., 2010, p. 10). Consequently, successful dissemination of the committee’s new clinical diagnostic criteria will entail not only educating clinicians about the content of the criteria but also addressing the attitudes and beliefs that could hinder the criteria’s acceptance.
Click to expand...

@Nielk - that is a fascinating peer into the world of how clinicians view ME/CFS. None of it particularly surprising, but it's sad to me that physicians admit they don't understand it and can't diagnose it but STILL have strong beliefs about it. That seems so sadly contradictory. 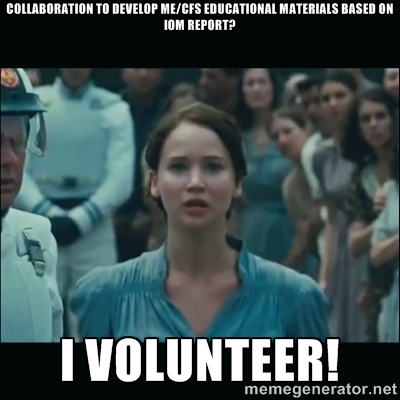 MCKING CONSULTING, out of Fairfax, VA. The head of the project is Keith Aikens, who has apparently worked on CFS advocacy in the past. We spoke today and I volunteered to be part of the patient cohort. He said he got the assignment a day or two ago and he is in the midst of putting his ducks in a row - and may be for some time. He seemed very kind and, more importantly, very aware of the complexity of the task he was undertaking.

I am sure that PR also has info about other authors on these papers.
M

CDC also appears to be conducting 4 focus groups and 12 patient interviews to get the patient perspective. This is using a group called the Aspen group. Patients have to have been diagnosed with CFS or ME by a doctor.

@Denise - seems promising! I'd like to see the videos that they created, but the first article seems to be in the right spirit.

medfeb said:
CDC also appears to be conducting 4 focus groups and 12 patient interviews to get the patient perspective. This is using a group called the Aspen group.
Click to expand...
That's odd. My contact at the CDC referred me to the other guys. And the other guys implied that they were looking for patients. Is there some kind of crossover, I wonder?

JaimeS said:
@Denise - seems promising! I'd like to see the videos that they created, but the first article seems to be in the right spirit.
Click to expand...
I have been unsuccessful in finding the videos.

I believe @medfeb's comment refers to another CDC project which this Aug 2015 CFSAC oral public comment asked questions about:

"To date CDC medical education has conflated ME and CFS resulting in confusion for healthcare professionals and patients alike.

What is known so far is based on feedback from a few advocates who talked to Aspen, the contractor conducting this work. Aspen asked those advocates to not publicize the initiative because they wanted to avoid being inundated with requests.

Additional information on the initiative comes from a set of project documents apparently submitted as part of the project approval process. Dated June 2015, they include the work that Aspen discussed with advocates.

This project approval document, includes a project description, that says this details four focus groups of ten patients each, two each in Denver and in Orange County, California and up to twelve phone interviews conducted with homebound patients.

The focus groups and interviews are being conducted to seek “feedback from CFS patients about their symptoms and the effects that the illness has on functioning.” The resultant information will be used “to revise educational materials, provide more accurate diagnostic guidance to clinicians and update the CDC website.”

To be eligible, the selection criteria for patients in the focus groups and the interviews must have been “told by a doctor or health care professional that you had CFS or ME” at some point and must still have CFS or ME.

The project approval document also says questions will be asked “about symptoms from the currently used 1994 Case Definition and additional symptoms recommended by the IOM report.”

These documents continue to refer to CFS (aka ME) and suggest that Fukuda cfs is the same as the neuroimmune disease discussed in the IOM report.

Because these are not one and the same, it is imperative that ME patients and CFS patients be separated out in educational efforts.

It is of great concern that this initiative is using CFS as well as ME patients.

The questions for CDC are as follows:
(as of 17 Sept 2015 CDC has not answered any of these questions)
M

Not sure. Could be multiple efforts going on.

Regarding the videos - I asked Dr. Unger about those and understand that the videos that were created did not discuss post-exertional malaise - that was covered in some kind of supplemental material. The videos have not been made available to my knowledge so I cant confirm how this worked. These videos were developed pre-IOM so I dont know whether/how they plan to use these going forward. I'd think the lack of PEM makes them not appropriate
You must log in or register to reply here.
Share: Facebook Twitter Reddit Pinterest Tumblr WhatsApp Email Link