The #MillionsMissing movement may be coming to China! 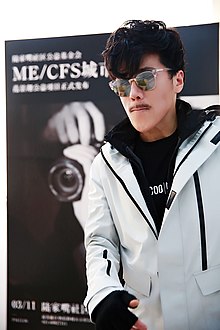 A huge thanks to @Fan Ching Hsiang for his work on the behalf of worldwide ME/CFS patients. This is a noble pursuit and has been a very long time in coming.

I'm putting aside a special thought for all those Missing in Action in your country today. Again, thanks!

Pyrrhus said:
Fan hopes to do monthly #MillionsMissing events in Shanghai and/or Taipei if possible!
Click to expand...
Fan Ching Hsiang, (also known as Fan Jingxiang or 范景翔) has brought ME/CFS awareness from Taiwan to Shanghai in mainland China!

The main purpose of the initiative is to integrate "art, education, public welfare, and culture" with the street culture "Colorful Four Seasons" as the center, and cultivate street and community literary talents, and enrich the spiritual culture of urban people.

Pyrrhus said:
Famous Taiwanese artist Fan Ching Hsiang, (also known as Fan Jingxiang or 范景翔) will be trying to bring #MillionsMissing to China:
Click to expand...
Here's a song by Fan about ME called "By your side":

Lyrics:
你 說不出多累 (You can't say how tired you are)
心和身體卻 疲倦 (Yet your body and heart are weary)
在 天亮和天黑 (In dawn and dusk)
分不清黑白 是非 (Cannot tell black and white, right and wrong)
眼前的世界 有太多無解 (The world before my eyes has so much insolubility)
會讓人膽怯 忘了該怎麼堅決 (It's so intimidating that people forget how to make up their minds)
記得我會在你身旁 (Remember that I will be by your side)
不要害怕 (Do not fear)
夢和夢之間 (Between our dreams)
讓 真實的愛上演 (Let real love set stage)
我會在你身旁 (I will be by your side)
不管多遠 (No matter the distance)
心和心之間 (Between our hearts)
擁抱著信念 (Embracing our belief)
溫暖填滿 每一個明天 (Warmth will fill every tomorrow)
勇敢穿越 (Going through bravely)

Pyrrhus said:
Pengpu Xincun Street and "ME/CFS Urban Slow Life" held the "First Art Star" international response
19 April 2021
https://baijiahao.baidu.com/s?id=1697454710942868639&wfr=spider&for=pc
Excerpt: (translated by Google Translate)
Click to expand...
Okay, that was a terribly translated article.
It talked about an event that will occur on May 12, not an event that had already occurred!

Here is a slightly clearer article:

The purpose of this event is to focus on the oriental cultural spirit "Colorful Four Seasons", and strive to "art, education, public welfare, and culture" to cultivate social literary and public welfare talents, and unite with global media platforms, art and culture promotion ambassadors, and care about chronic fatigue of ME/CFS Global charity ambassadors, jointly advocate contemporary art and culture, charity spirit, slow life and health awareness, building a green ecological environment, etc.; social activities take care of and pay tribute to chronic fatigue of global ME/CFS, and have won the support and response of the international charity organization MILLIONS MISSING.
[...]
This time, Fan Jingxiang’s "Video Work "True Goodness and Beauty"" was inspired by Shanghai Pengpu Four Seasons Park, with natural forces, healing art, and life consciousness as the core of the production. In the filming script, he interprets a "ME/CFS chronic fatigue patient" who walks into the park with a belief in life and feels the joy and gratitude of the "power of nature". He also shared: Flowers, clouds, soil, forests, rocks, and water flow symbolize vitality, and feel the "healing energy" to thank the world and everything, which is also the life concept promoted by "ME/CFS Urban Slow Life". I hope that through the video works, it will bring the chronic fatigue of ME/CFS to the current society. The busy workplace people feel the "healing energy" that is the meaning of their creation.

For this release, Fan Jingxiang also invited art and culture promotion ambassadors Zhang Jiazhen, Lan Guochuan and other "collective performance art" to wear "Luminous Elf Smiley T-shirts" to participate in the event to shoot works, responding to the world's charity actions and extending the artistic spirit of the event. Hope to spread the positive energy of "smile" through the "fashion spirit", and advocated by fashion design: the importance and value of art education, creative design, charity spirit, and cultural communication.
Click to expand...
Where can I get my own "Luminous Elf Smiley T-shirt" ?!
Last edited: Apr 23, 2021

This one is courtesy of WEGO-nominated patient advocate Carrie Kellenberger:

Life.tw said:
On May 1st International Labor Day in 2021, Fan Jingxiang, Warner Philanthropist and ME/CFS Urban Slow Life Philanthropy Project initiator, released a new "Public Welfare Work "Motion" on the public platform for the first time.
[...]
Fan Jingxiang’s "Public Work "Activity"" has four pictures describing the "relationship between ME/CFS chronic fatigue and "activity". He served as a daily counselor for 30 people suffering from ME/CFS chronic fatigue for eight years. Fan Jingxiang shared: Patients suffering from chronic fatigue of ME/CFS hope that they have more physical fitness, time and excellent performance, and have higher expectations for the value of their lives.
[...]
He once said: This is also one of the life spirits he has learned from "ME/CFS chronic fatigue syndrome patients", and each patient is his own life mentor. In the absence of a complete and complete treatment plan for ME/CFS diseases in the world, it is very difficult for patients and groups to live in accordance with the medical treatment plan recommended by the government in the current society. Patients face their own health status, family environment, and work. Abilities, life economy, interpersonal relationships, etc. are all life challenges. "Thank you" is the strength of the patient's life, and it is also the "return of life."
Click to expand...
"Chronic Fatigue Syndrome" takes a long time to be diagnosed! Fan Jingxiang pays tribute to labor workers and publishes public welfare works
https://m.life.tw/?app=view&no=1271175
Excerpt:

Due to the instability of the human immune system caused by ME/CFS symptoms, people who are mild can still be engaged in social work; those who are severe may also need prolonged rest and bed rest; the "physical limitations" caused by the disease is also for everyone ME/CFS chronic fatigue requires self-regulation at the physical and mental level.

As the "ME/CFS" diagnosis takes a long time, it is very important to give the fatigued people benevolent care, positive energy encouragement, and love sharing during the process; every "ME/CFS chronic fatigue person" hopes to invest more in his heart "Labor Value" contributes to the society and the public welfare group. This is the moving experience he has invested in counselors for many years, and it is the voice of the ME/CFS group every year on International Labor Day.
Click to expand...
L

Hi @Pyrrhus.....Is there a strong movement re: ME/CFS in Taiwan? If so, why or should I ask, how? It's nice to see people actively involved in this endeavor and I hope they'll see some positive results. Yours, Lenora.

Given the Chinese govt's lack of responsiveness to other issues, including those in Taiwan and Hong Kong, I'm not going to wait standing up .... but I'll be watching hopefully ....

Actually, I do as little as possible standing up ....

lenora said:
Hi @Pyrrhus.....Is there a strong movement re: ME/CFS in Taiwan? If so, why or should I ask, how? It's nice to see people actively involved in this endeavor and I hope they'll see some positive results. Yours, Lenora.
Click to expand...
Hi Lenora!

No, there does not appear to be a strong ME/cfs movement in either Taiwan or mainland China.

But, as this discussion thread shows, there are committed people trying to change that, so we'll see!

Just 10-15 years ago, there was very little ME/cfs awareness in Japan, but a lot has changed in the last ten years, largely thanks to the efforts of the Japan ME Association NPO:
https://forums.phoenixrising.me/threads/japan-me-cfs-in-japan.82385/

Since the establishment of the Japan ME Association, there have been meetings with government officials, awareness events, a research conference, and even sympathetic news articles!

But no money for research from Japan? At least there's awareness now, and that's a huge step in the right direction. Yours, Lenora.

Fan Ching-Hsiang (AKA Fan Jingxiang) is in the news again!

The article describes a new photographic series by Fan, and an accompanying effort to promote coronavirus vaccination. 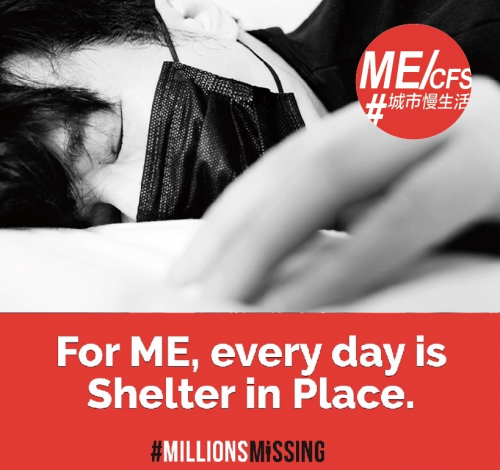 Imgaine one more virus on top of the one we probably already have. Uh, no thanks. It's a good feeling to know so many who have been vaccinated today....life is returning to normalcy (well, sort of!). Yours, Lenora.

as long as you manage to stay alive, there's hope

won't the government censor any effort to spread awareness about Me in ch*na?

The singer Fan Ching-Hsiang (AKA Fan Jingxiang) and the producer Chen Jun were invited to shoot Millions Missing international public welfare posters in response to the International ME Awareness Day! 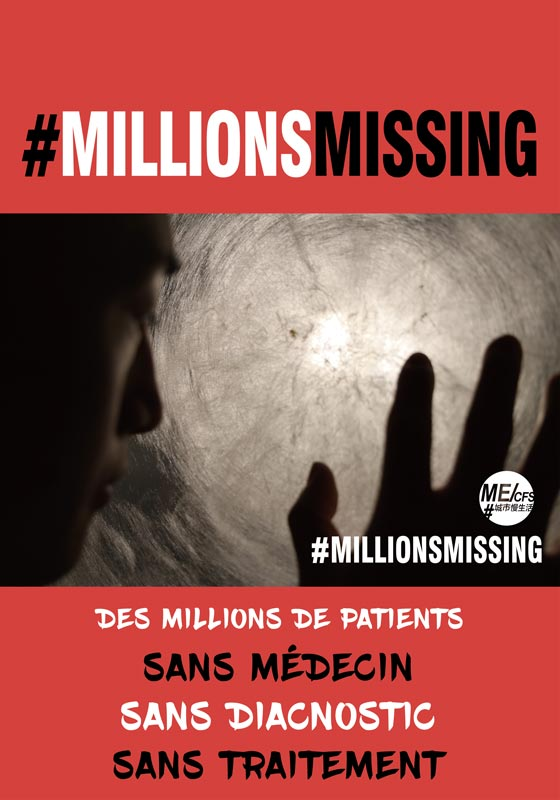 No, there does not appear to be a strong ME/cfs movement in either Taiwan or mainland China.

But, as this discussion thread shows, there are committed people trying to change that, so we'll see!

Just 10-15 years ago, there was very little ME/cfs awareness in Japan, but a lot has changed in the last ten years, largely thanks to the efforts of the Japan ME Association NPO:
https://forums.phoenixrising.me/threads/japan-me-cfs-in-japan.82385/

Since the establishment of the Japan ME Association, there have been meetings with government officials, awareness events, a research conference, and even sympathetic news articles!