RogerBlack said:
I searched pubmed for the list of publications with him as an author. Including comments.

....He is astoundingly bad at this concept of 'retirement'.
Click to expand...
But first he has to want to retire.

Thanks for adding these more recent papers, Roger, I didn't have time last night to look for additional papers beyond those I had listed in 2008.

Sean said:
I think Wessely knows he can't survive proper scrutiny, and that it is coming big time, and that he can't stop it. It is all now just delaying and obfuscation, in a desperate attempt to mitigate his culpability.

His whole defence will be reduced to: I had honourable intentions. No, really, I did. Please believe me.
Click to expand...
He retires in five years. After that I'm guessing he will be unavailable for comment. I'm guessing he's got the two things he needs - lots of friends in high places and an as yet unchallenged narrative in uk to survive this. Neither uk charities has done anything about his latest media either so, here to five years Wessely, then your reputation will shatter.

Cinders66 said:
He retires in five years. After that I'm guessing he will be unavailable for comment. I'm guessing he's got the two things he needs - lots of friends in high places and an as yet unchallenged narrative in uk to survive this. Neither uk charities has done anything about his latest media either so, here to five years Wessely, then your reputation will shatter.
Click to expand...
Has he said he plans to retire at age 65?

Depending on his pension scheme, he could continue to work until 68 or beyond.


Without wishing to stray too far off topic: Planned changes will see the State pension age rise from 66 to 67, then to 68 for both men and women.
Last edited: Feb 16, 2017

Sidereal said:
There is clearly an organised media campaign against ME/CFS patients...
Click to expand...
http://bit.ly/1vSRhOI


"The Government's preferred provider of security advice and support for the publicly funded Biomedical Research Sector throughout the United Kingdom.

"A Director of support4rs, Sam Nicholls, has transposed Extremism and Counter Terrorism expertise gained within the UK Police Service, and specifically as the National Coordinator of Operations – Domestic Extremism, leading the UK Police’s national investigatory response, to develop bespoke and specialist risk management support for the Biomedical Research Sector etc"

However, independently, we work with commercial enterprises to provide consultancy services and support"
Last edited: Feb 16, 2017

At the end of January a meeting was held at which 'harassment' of researchers was discussed.

The Medical Research Council (MRC) and the Science Media Centre (SMC) are two of the UK
CMRC Observers. Ed Sykes, SMC Head of Mental Health, attends the meetings of the Executive Board on behalf of the SMC, while Joe McNamara & Neha Issar-Brown attend on behalf of the MRC. The MRC contributed nearly £5000 to the launch of the Collaborative and have stated their willingness to be involved in and contribute further both directly and in kind.

· On the 1st February 2013, an email was sent from the out-going Head of Mental Health at
the SMC. It was a “write up of the main points to come out of” the ‘CFS’ meeting held at
the Wellcome Trust the day before. (quote 13)

· “All the best with this for the future, I hope the launch of the research collaboration goes
well and that it gets easier to do research in this field.” (quote 14)

· Those in attendance at this meeting had included UK CMRC members Peter White of
QMUL, Joe McNamara and Carmel Turner of the MRC and Esther Crawley of Bristol
University. Simon Wessely & Trudie Chalder of IOP, King’s College London were also in
attendance.

- ‘Coming out’ about the harassment has led to increased support for CFS/ME
researchers, for example, from colleagues who were not aware of the situation.
· (quote 16)

- Harassment is most damaging in the form of vexatious FOIs.

- Complaints are also causing problems. Researchers are still dealing with complaints
about them to the GMC.

· (quote 17) ….. researchers are using strategies to reduce the impact of harassment and put
the case for research into CFS/ME including:

- Coming together as a research community to respond to criticisms eg the joint letter in
response to criticisms of Simon Wessely receiving the John Maddox prize.

- Esther Crawley and Stephen Holgate are establishing a research collaborative including
researchers, charities and other interested parties. There will be a launch event on 22nd
April.

- SMC – run a press briefing on biosocial illness to improve public understanding. Fiona
Fox to get information from Trudie Chalder and Rona Ross-Morris.

"There are still many illnesses in which the cause is unknown or disputed - and this usually acts as a spur to further research aimed at achieving a more complete understanding. But there are a handful of disorders in which some patients become convinced that they already know the cause: so deeply convinced that alternative explanations are seen not merely as false but as put forward with malicious intent. Researchers who are investigating or merely discussing these alternatives, they believe, must at all costs be silenced. And “all costs”, in this context, can mean taking action against them as individuals...."

There was also that appalling feature article in the May 2013 Sunday Times colour supplement. The front cover bore a mock up of an anonymous threat letter made from cut outs from newspaper fonts.

For those not aware:

Michael Hanlon, author of that article, died aged 51 in February 2016. He was involved in the setting up of a Jurassic Coast project in Dorset:

With apologies if it has already been mentioned in this thread that during the week that Prof Wessely speaks on Radio 4, New Scientist published on the Fluge et al paper.

Cinders66 said:
Interesting 1994 interview with Simon Wessely and Dr Charles Shepherd on IBS and CFS. I have never understood how people treat the two as almost the same conditions. Anyway I think here, after the viral trigger, Simon Wessely makes it clear his primary perpetuating factors are psychosocial rather than organic.

charles shepherd said:
Not much has changed since 1994!

CS
Click to expand...
... and it so should have given how much delusional and refutable nonsense there's been. The vested interests of the BPS model are clear to see and it's shameful that it's been allowed to continue its impact for so long. If those involved lose their careers and reputations as a result of increasing bio-medical evidence they only have themselves to blame.

I didn't realise that AFME awarded about a quarter of a million to Prof Peter White as recently as 2014.

How can they possibly claim to represent people with ME? 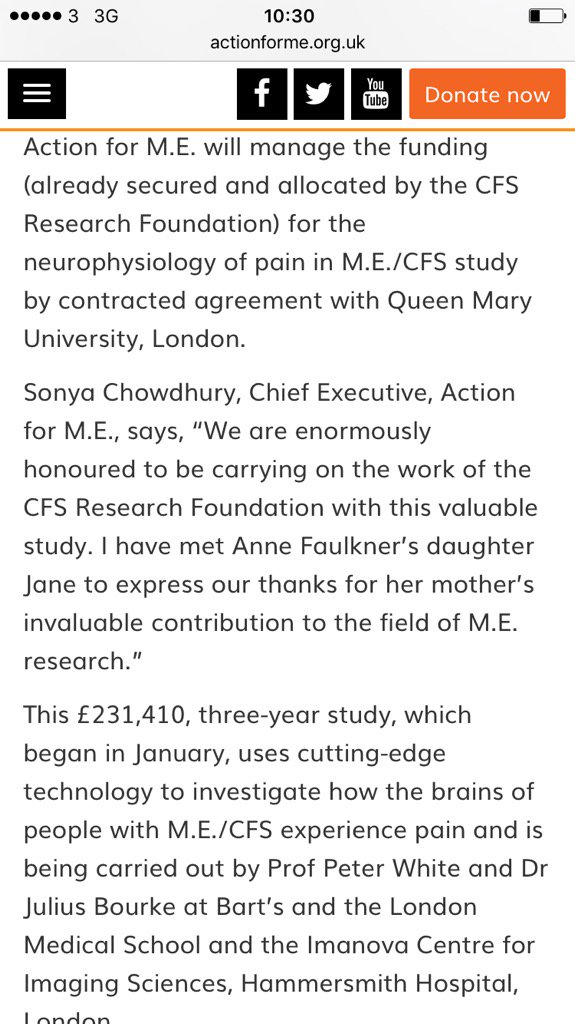 Countrygirl said:
I didn't realise that AFME awarded about a quarter of a million to Prof Peter White as recently as 2014.
Click to expand...
They took on an research award that had been given by a different charity that closed and transferred the money to AfME.

Countrygirl said:
I didn't realise that AFME awarded about a quarter of a million to Prof Peter White as recently as 2014.
Click to expand...
3 year study.......does that mean it's still going on?
T

Duly noted for the historical record.

Sean said:
So it was you that started it all.

Duly noted for the historical record.
Click to expand...
I think that this is an important point. He has admitted that the National Hospital treated it's ME patients with contempt and they hated us.

He has also admitted that the National Hospital missed the muscle (and other) abnormalities in the patients who were referred there. They did not follow on from the work of Behan et al and didn't even attempt to investigate the physical problems patients had which could have saved us all decades of suffering.

These are major statements. It's wasn't a benign neglect. The National made a decision here.

(I was one of the unlucky ME patients seen at the National. Not by SW but by his colleagues).
B

Esther12 said:
So they started, and this happens a lot when people don’t know what to do, they started asking psychiatrists to get involved
Click to expand...
... and you think that is because people believe you know what you are doing?

Esther12 said:
and then we started to think about how can we improve treatments, which wasn’t difficult because there wasn’t any.
Click to expand...
Nothing new there then.

Esther12 said:
Quoting Wessely: 'and then we started to think about how can we improve treatments, which wasn’t difficult because there wasn’t any.'
Click to expand...
I think this is very revealing. He is effectively saying, it was easy to dream up any old treatment since there wasn't one to test it against.

Just make up an un-testable theory, design an easy treatment to administer, preferably one which, when it fails, can be ascribed to the patients not wanting to get better.