Which antivirals are able to cross the BBB?

Nuno said:
Btw, do you know how does one turn down the glial cells over activation?
Click to expand...
Minocycline is supposed to do that. However, it didn't have any noticeable effect on me. I think there are some other chemicals/supplements that theoretically do that, but I can't think of them right now.

Nuno said:
then what could possibly be causing the neuroinflammation that has been shown in some spect scans?
Click to expand...
The vagus senses infection everywhere in the body and sends the signal to the dorsal brain stem. Here are the nuclei that are responsible for the sickness behaviour. The brain stem is loaded with microglia. So when they get a cytokineic signal to activate they do. And after the signal is gone they stay primed. That means they are more sensitive for the next signal. Ongoing inflammation/infection in the body (like in the gut) continues to trigger the vagus and thus the microglia. The signal gets amplified and as a result we have a chronic activation of microglia.

Nuno said:
Btw, do you know how does one turn down the glial cells over activation?
Click to expand...
That's something for example Jarred Younger wants to investigate. Some candidates: 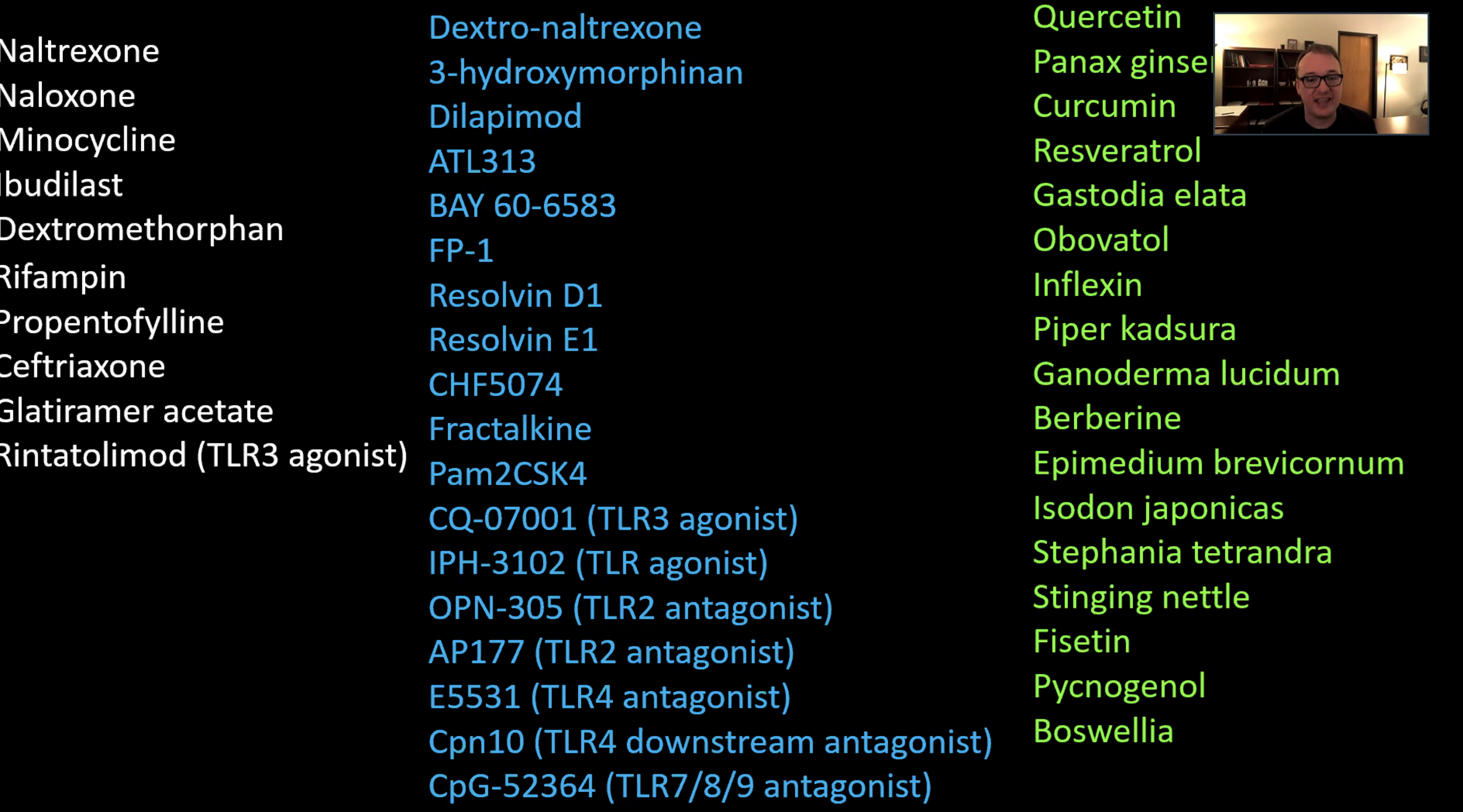 You can try to plug all holes in the ship (antivirals,gut repair,thyroid,mitochondria etc) in order to scoop water out of the ship,but the holes are not truly plugged until the brain mechanisms are addressed, which in the end are responsible for all the mechanisms in our body..That was my experience and I see it in all the other healing stories.

Irat said:
That was my experience and I see it in all the other healing stories.
Click to expand...
What about the healing stories of for example Chia's patients, some after Equilibrant, some after Tenofovir/Epivir and now possibly Remdesivir?

I don't want to say that addressing the brain isn't necessary and my experiment with Abilify last year and Wellbutrin this year shows that it's heavily involved. But there are other stories out there than those of Raelan Agle's (good and promising!) videos.
I

Martin aka paused||M.E. said:
What about the healing stories of for example Chia's patients, some after Equilibrant, some after Tenofovir/Epivir and now possibly Remdesivir?

I don't want to say that addressing the brain isn't necessary and my experiment with Abilify last year and Wellbutrin this year shows that it's heavily involved. But there are other stories out there than those of Raelan Agle's (good and promising!) videos.
Click to expand...
Yes for some this is enough,like for example ppl doing only the Cutler protocol,but for most it's not,Neil Nathan says this too ,that if the culprit (mold,heavy metals,virus) is removed ,maney ppl still stay sick, and recommends DNRS retraining too, but yes for some fixing the holes its enough,.but me personally I have t seen anyone yet in all those years.
Last edited: Sep 20, 2021
W

Martin aka paused||M.E. said:
Some candidates:
Click to expand...
I've tried 8 of those candidates. No significant effect. My guess is that it isn't simplistic overactivation of glial cells; it's some other dysfunction involving them.

Hip said:
The antivirals which are usually used to target herpesviruses in ME/CFS, Valtrex, Famvir and Valcyte all cross the BBB reasonably easily. Cidofovir crosses it to a degree.
Click to expand...
Valacyclovir for Herpes Simplex Encephalitis (2011) [10.1128/AAC.01023-10]

Pouplin et al. said:
These results suggest that acyclovir slowly crosses the blood-brain barrier and is then actively transported out of the CSF compartment and supports the idea that the plasma profile (IV versus oral) is unlikely to significantly affect the CSF/plasma ratio.
Click to expand...
This is consistent with my own pharmacokinetic simulation. For 500mg Valaciclovir twice daily (12h-12h) over two weeks, I predicted a Cmax in the brain of ca. 6.6 μM (of the active drug). The brain eliminates the drug very quickly but accumulates it slowly over a long period. This means a tight schedule is necessary due to the half-life of Valaciclovir. 500mg is only sufficient for HSV. Depending on the targeted virus, higher concentrations will be necessary. Within the approved dosage limit of 2g, it would only be able to inhibit HSV reliably, EBV and VZV only at its peak concentrations, but not CMV or HHV (different assay IC50s).

This is the only antiviral drug I've personally analyzed so far because it's the drug with the most data available and the drug with the smallest mutagenicity potential. It can still damage tubular cells though.

The following study is the only one on Valcyte (valganciclovir) CSF concentrations I know.

But what is the targeted threshold? The FDA published the drug application here.

The required virustatic concentrations vary widely depending on the cell type, metabolic signaling, the type of virus variant, and how resistant the respective variant is to the drug. 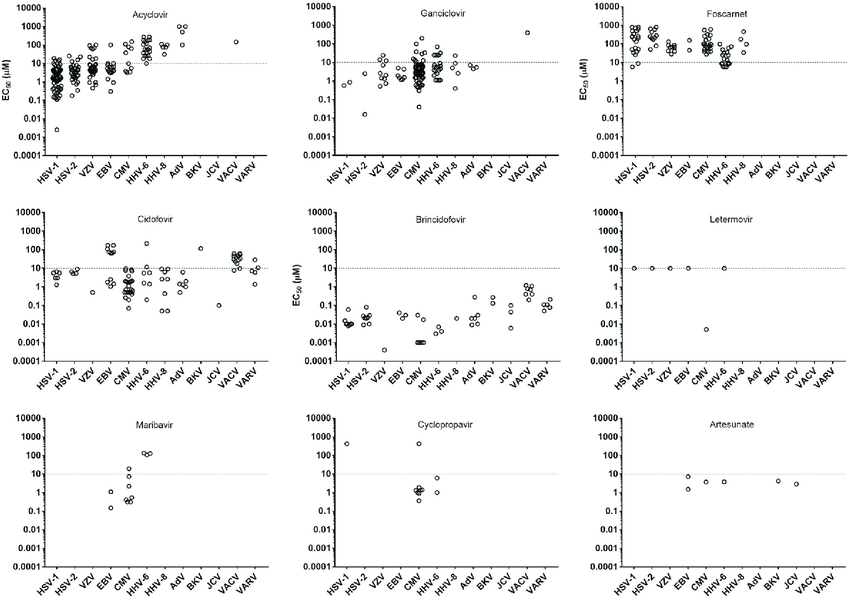 At least, ganciclovir seems to be more effective against HHVs, even though the toxicity margin is narrow for bone marrow cells. The peak plasma concentrations from the same oral dose may also vary widely, but the trough concentration is almost always below the inhibitory concentration in bone marrow cells. At least temporarily, the bone marrow should be able to produce new progenitors and blood cells. I doubt, however, that long-term treatment with 900mg is the best option. 450mg in a 12h-12h schedule might increase the safety while still providing sufficient efficacy.

For sufficient brain concentrations, it also depends on the targeted virus. For HSV, 450mg might be sufficient if the variant isn't resistant yet. For EBV, CMV, and HHV, 450mg would most likely not help and even 900mg might still be a lottery.

Great work as usual @nerd , thank you very much for this!
V

Andrographis, a potent antiviral, is able to pass through the BBB, and in studies has been shown to improve BBB function. This PDF has links to all types of studies, and I will put some of the most apropriate ones in this thread.

Lactoferrin, an antimicrobial , antifungal, and antiviral is able to cross the BBB;

Due to the presence of LfR on brain capillary endothelial cells and neurons, exogenous Lf can easily cross the blood-brain barrier (BBB) and reach neural tissues; thus, Lf was successfully used as a potential brain-targeting delivery system [55,56,57,58,59

This paper covers many applications for lf. Lf nanoparticles may be a good way to deliver many types of drugs and nutraceuticals.

In case of viruses, LF was found to interfere with the binding ability of retroviruses to host cells. Bovine LF can also prohibit integrin-mediated internalization of adenovirus into host cells via its attachment to viral polypeptides III and IIIa [28]. LF can also bind to integrins and GAGs receptors at the surface of host cells. These receptors are essential for viruses to enter the host cells. As a result, binding of LF to these receptors may interfere with viruses attachment and thus might reduce infection of host cells [29].