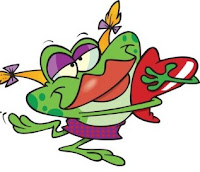 I'll get to the weed-killer analogy quickly. But first, allow me a little celebration- today marks my eighth week on Ampligen, and I've now officially entered the "plateau" phase of my treatment. Whereas at first I was seeing almost weekly improvements in things like my sleep, appetite, and other empirical data (see previous posts) now there really is nothing new to report. My doctors and nurse, as well as other patients, have all told me that the next "bump" in dramatic improvement will come as enter the 4th month of treatment - so now I just have to be patient.

Yet although there are not as many visible manifestations, from what I've read, apparently the twice-weekly Ampligen infusion is still silently, secretly, doing its two main jobs:

I flunked out of chemistry in College, so these words of course teach me about as much as I would learn if I was reading the phone directory from Lisboa, in native Portuguese. But thanks to the Internet, I discovered more about how and why Ampligen is working for me.

Some viruses, such as M.E., HIV, Herpes, and HBV overcome intracellular immunity by producing substances that deactivate RNase-L, thereby allowing the virus to multiply freely within the intracellular environment and clinical deterioration occurs. Think of that. Virus cells have been multiplying in my body at will. Scary thought. But Ampligen helps our bodies restore the enzymes that help control the uninhibited growth of some of these viruses.

Think of planting a lawn. In many parts of the world you can buy seed that has a built in "inoculator" that keeps nitrogen up, and as a result, weeds from growing around it. It's just an enzyme or bath that they soak the seed in, and it works! I've personally planted alfalfa in desert climates that had this inoculant, and it was perfect. Best of all, every season it came back stronger than before!

Now, if that seed is left in the sun before planting however, and that inoculation enzyme gets "burned off", the plant will be weaker, and weeds will grow around it. So then the gardener has to resort to more antiquated weed prevention...like pulling the weeds by hand, or spraying some weed-killer chemical all over the lawn. But those measures always are less effective, because the weed killer invariably kills some good seed, and pulling weeds by hand always takes out some good growth. So potent are weed-killers, that the National Academy of Sciences reported in a peer-reviewed journal that they can actually turn male frogs into females.

So think of your body as having it's "inoculant" missing...and then doctors, who can see the weeds in your body, start prescribing antibiotics, anti-virals, and sometimes even resort to "pulling" things. You're catching my drift now, right? Those "solutions" always have side effects, just like in my lawn example above. Our stomachs don't like antibiotics, because they kill the good bacteria as well. We get our tonsils out, or sinus surgery, because our bodies are no longer "innoculated" against allergies or sinus infections. And the weed-killer chemicals keep trying to kill the weeds, but they leave scorched earth behind.

Ampligen is better than the weed-killers, in that it actually restores our body's inoculant power. How?

Published research shows that Ampligen activates 2-5A synthetase. Activated 2-5A, in turn, activates this enzyme called RNase-L, which destroys viral RNA. Let me underscore that point- Ampligen's work on this enzyme makes it possible for actually destroying viral RNA. 2-5A itself also can control the growth of certain human tumor cells and inhibits reverse transcriptase, the enzyme both HIV and HBV use for reproduction.The protein kinase (p68) pathway is also affected in a similar manner.

Plus, as a side benefit, I'm feeling more "masculine" day by day!
Continue reading the Original Blog Post