Background on Prof Pall:
Professor Martin Pall, PhD, Professor of Biochemistry and Basic Medical Sciences at Washington State University. He is a self recovered chronic fatigue sufferer, who developed and researched the science behind the illness and a route to recovery. His 15 years of specific research into ‘Explaining Unexplained Illnesses’ has resulted in his new book which draws upon more than 1500 scientific references, 15 of his own peer review publications and 5 human trials.
L

This seminar is being offered by "Clinical Education, UKs leading providers of post graduate nutritional therapy education", for 60 pounds. I wonder why.

I'm quite new to the different theories for potential causes of Me/CFS. Can anyone give me a quick update on what is thought, in general, of Dr Pall's theory? Would it mesh with the other theories out there? Has anyone been treated by him?

[ps the page also has a list of his publications]

The NO/ONOO- cycle is a biochemical vicious cycle that is thought to cause such diseases as chronic fatigue syndrome/myalgic encephalomyelitis (CFS/ME), multiple chemical sensitivity (MCS), fibromyalgia (FM) and possibly a large number of other chronic inflammatory diseases.
figure 1 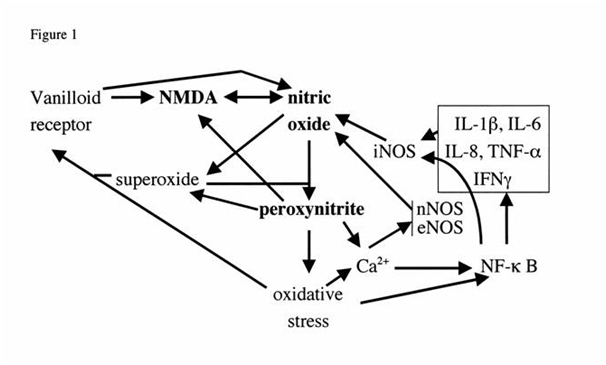 Vicious (NO/ONOO-) cycle diagram. Each arrow represents one or more mechanisms by which the variable at the foot of the arrow can stimulate the level of the variable at the head of the arrow. It can be seen that these arrows form a series of loops that can potentially continue to stimulate each other. An example of this would be that nitric oxide can increase peroxynitrite which can stimulate oxidative stress which can stimulate NF-kappaB which can increase the production of iNOS which can, in turn increase nitric oxide. This loop alone constitutes a potential vicious cycle and there are a number of other loops, diagrammed in the figure that can collectively make up a much larger vicious cycle. The challenge, according to this view, in these illnesses is to lower this whole pattern of elevations to get back into a normal range. You will note that the cycle not only includes the compounds nitric oxide, superoxide and peroxynitrite but a series of other elements, including the transcription factor NF-kappaB, oxidative stress, inflammatory cytokines (in box, upper right), the three different forms of the enzymes that make nitric oxide (the nitric oxide synthases iNOS, nNOS and eNOS), and two neurological receptors the vanilloid (TRPV1) receptor and the NMDA receptor.

These four illnesses, chronic fatigue syndrome (CFS/ME), multiple chemical sensitivity (MCS), fibromyalgia (FM) and post-traumatic stress disorder (PTSD) often occur together in the same individuals (they are comorbid) and share many symptoms in common (1,2). They also share a common pattern of case initiation: Each is often initiated (that is started) by a short-term stressor only to be followed by chronic illness that typically lasts for years and most often for life. These various similarities and overlaps among these four have led many scientists to suggest that they may share a common etiology (cause), however they have been uncertain what the cause may be. I will call these four illnesses multisystem illnesses, following the lead of some others, and will challenge here the claims they are unexplained and that even their symptoms are unexplained. What many have called the Gulf War Syndrome is a combination of all four.

1. Short-term stressors that initiate cases of multisystem illnesses act by raising nitric oxide synthesis and consequent levels of nitric oxide and/or other cycle elements.
2. Initiation is converted into a chronic illness through the action of vicious cycle mechanisms, through which chronic elevation of nitric oxide and peroxynitrite and other cycle elements is produced and maintained. This principle predicts that the various elements of the NO/ONOO- cycle will be elevated in the chronic phase of illness.
3. Symptoms and signs of these illnesses are generated by elevated levels of nitric oxide and/or other important consequences of the proposed mechanism, i.e. elevated levels of peroxynitrite or inflammatory cytokines, oxidative stress and elevated NMDA and vanilloid receptor activity.
4. Because the compounds involved, nitric oxide, superoxide and peroxynitrite have quite limited diffusion distances in biological tissues and because the mechanisms involved in the cycle act at the level of individual cells, the fundamental mechanisms are local. The consequences of this primarily local mechanism show up in the multisystem illnesses through the stunning variations one sees in symptoms and signs from one patient to another. Different tissue impact of the NO/ONOO- cycle mechanism is predicted to lead to exactly such variations in symptoms and signs. One also sees evidence for this fourth principle in published brain scan studies where one can directly visualize the variable tissue distribution in the brains of patients suffering from one of these illnesses.
5. Therapy should focus on down-regulating the NO/ONOO- cycle biochemistry. In other words, we should be treating the cause, not just the symptoms.
Click to expand...

Here is a thread started by richvank yesterday.