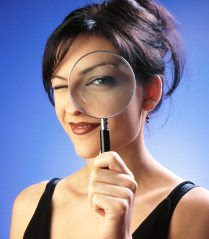 With my nose completely shut due to allergies, out of desperation the other day I took an OTC antihistamine. It was Italian day at lunch and I had grown weary of not tasting any of my food, so ignoring the instruction panel I ripped open the package where the headline read "Daytime Safe Formula" and took the tiny white tablet without even a glance at the label. Big mistake.

Exactly twenty minutes later, with my eyelids heavier than concrete and ravioli dripping from my chin, I lifted my weary, sleepy head out of my plate, and with all the effort I could muster, focused a magnifying glass on the small print on the side of the box and read to my dismay: "Warning: May cause drowsiness."

"Whaaat?" I said to myself, "this is supposed to be 'Daytime Safe'! Safe for what - outpatient surgery? I felt like I had been shot with an elephant dart full of thorazine, and in tiny 4-point helvetica type they whisper "may cause drowsiness?" Whatever that stuff was, in my view it would have been much more honest to reverse the whole thing, and label it a "Guaranteed to Put You To Sleep Medicine" with a smaller mention of "May also help control your allergies."

Regardless of the intent, the combination of the misleading package headline and the small print on the instructions ended up costing me a half day of cogent thinking, as I sleep-walked through the remainder of the day.

It could have been worse. Some of the newer drugs advertised on television really scare me. Have you seen any of these commercials? Thanks to recent regulations, when a drug manufacturer advertises on TV they can't hide the fine print like they do on packaging, because the FDA makes them actually say all the ugly stuff on TV.

For example, there's a new weight-loss drug by Glaxo Smith Kline promoted on TV called "Alli." On the shelf in the drug store, you might be drawn to it. The box is cute, with rainbow colored lettering, all very easy to read and "safe-looking." The TV commercial has skinny people frolicking in a field, wearing all white.

But on TV, they are mandated to say all the fine print that you wouldn't normally read, and it's pretty hilarious, if not frightening.

"Side effects to Alli include gas with oily spotting, loose stools, more frequent stools, and stools that are hard to control."

I don't know about you, but no matter how much weight I lose, I've always found it difficult to look svelte when the gas I pass leaves an oily spot. And I'm thinking the last thing I'm wearing when I take Alli is white pants.

I'm serious. This is not hyperbole. Here are a couple more:

Requip - a dopamine drug to counteract tremors: "side effects include an unusual urge to gamble and increased sexual urges and behaviours."

So it's either the shakes, or I turn into Hunter S. Thompson? That doesn't sound like a good deal to me.

Now I may not remember all the details of my adolescence, but I'm pretty sure at age 14 that I probably would have learned to live with that pimple on my nose, if it meant walking my clean, acne-free face around high school with a broken leg in a cast. And yes, I admit it, macho-boy not withstanding, I would definitely be in tears, crying my eyes out, if I put the cream on my face and my butt started bleeding! Who wouldn't at age 14?

Reading the fine print is even more important for us fighting this disease, because research has shown that with our immune systems in overdrive, or out of whack, our bodies often react quicker, or more strongly, to published doses.

We also sometimes react to other people, or other circumstances, differently, or more strongly as well. That's because our Central Nervous System is under attack, and our "senses" are often attenuated.

Yesterday a woman at the gym had her personal aerobics CD blaring from her iPod, not using her ear buds as is the policy, so I was forced to listen to what for me was like nails on a chalkboard. It wasn't the oldies music so much that I minded, but the invasion into my brain of the super-animated Richard Simmon's voice, urging me to "Come on!" a dozen times per minute.

When I asked her to use her earphones "please!" she surprised me by saying "there's just two of us here, it's not that loud."

I couldn't believe it. My ears were ringing, and she thinks it's "not that loud?" Right then my wife arrived and I thought I'd get reinforcements. As she got on the treadmill I asked her if the noise bothered her, and to my surprise and dismay she said, "no, not really. It's not that loud."

Not that loud? To me it felt like Richard Simmons himself had taken up residency in my gym shorts, and had placed a megaphone an inch from my face screaming. At that moment I saw myself in the wall to wall mirror, with my eyes dilating, my brow furrowing, and the anger starting to rise.

These were the "side effects" of the disease I battle, the "fine print" about my health that most people didn't see or discover until something like the Richard Simmons episode ignited them, or revealed them.

Sometimes I can feel my heartbeat increase, and blood pressure rise. Other times I can feel the weight of a dark cloud. If I'm fortunate enough to be near a mirror, one sign that many of my doctors have confirmed is pupil dilation.

My wife has gotten used to these "side effects" and often snaps me out of them with focused little comments like "your eyes are dilating again" or "you look like every orifice in your body is about ready to burst."

That last one usually does the trick, because I can actually picture the scene. It always starts with me frolicking in a field, wearing all white.
Continue reading the Original Blog Post