Abstract
Central fatigue leads to reduced ability to perform mental tasks, disrupted social life, and impaired brain functions from childhood to old age. Regarding the neurochemical mechanism, neuroactive tryptophan metabolites are thought to play key roles in central fatigue. Previous studies have supported the “tryptophan-serotonin enhancement hypothesis” in which tryptophan uptake into extensive brain regions enhances serotonin production in the rat model of exercise-induced fatigue.
However, serotonin was transiently released after 30 minutes of treadmill running to exhaustion, but this did not reflect the duration of fatigue.

More recently, our study demonstrated that uptake of tryptophan and kynurenine derived from the peripheral circulation into the brain enhances kynurenic acid production in rat brain in sleep deprivation–induced central fatigue, but without change in serotonin activity. 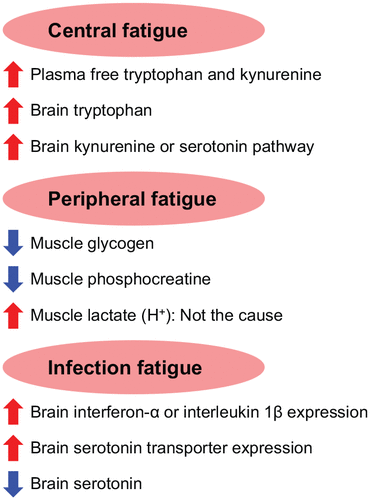 Very recently, the “tryptophan-kynurenine enhancement hypothesis” has been proposed to explain the mechanism of central fatigue15,22-25 and has been supported by evidence including reduced spontaneous motor activity in response to kynurenic acid administration, impaired memory performance in response to co-administration of kynurenic acid plus quinolinic acid,15 and elevated concentrations of tryptophan and kynurenic acid in the brain under sleep deprivation–induced central fatigue conditions.22,24

@Wishful
I think your kynurenine is elevated, am I right?

Central fatigue is defined as a failure of the central nervous system to adequately drive the muscle, manifesting limited development, and maintenance of locomotor activity.
A plateau in hypoxia leads to central fatigue and followed by maximal motility recession. However, the underlying mechanism is still unclear.

The present study describes a mechanism by which liver CEBPβ (CCAAT/enhancer-binding protein beta) induced by hypoxic environment alters the kynurenine (KYN) metabolism and causes the suppression of motility function recession.

However, the knockdown of CEBPβ by injecting pAAV-shRNA-CEBPβ via the hepatic portal vein reduces the KYN production and improves the motility function. KYN is a neurochemical that which restricts the exercise capacity after injection in the basal ganglia in mice.

Reducing the plasma KYN protects the brain from hypoxia-induced changes associated with fatigue, and the knockdown liver of CEBPβ in mice renders resistance to fatigue post-acute hypoxia or tryptophan treatment.

This study reveals resistance to central fatigue as a strategy for acclimatization to hypoxia mediated by transcription factor CEBPβ in the liver.

I realized the paper was already posted on PR, would it be possible to do a thread/fusion?

pattismith said:
I think your kynurenine is elevated, am I right?
Click to expand...
I believe that my cerebral levels of neurotoxic kynurenines are elevated, but also that they're produced in my brain via IDO. BCAAs blocked the increase in symptom severity after quickly digested carbs (boosts TRP transport into the brain), so it seems that the TRP is catalyzed in the brain.

Also, I'm fairly convinced that I'm not suffering from hypoxia. However, it's interesting that they've shown that KYN can be responsible for muscle limitations. I didn't accept that ME's muscle limitations were due to muscle mictochondrial dysfunction.


Checking out a new paper ( https://jneuroinflammation.biomedcentral.com/articles/10.1186/s12974-020-1721-z ) regarding the KYN pathway in the brain, I found that KYN from the liver is also carried by the large amino acid transport system, and thus might be blocked by BCAAs.

"In the central nervous system (CNS), the kynurenine pathway starts by the conversion of tryptophan into kynurenine by indoleamine 2,3-dioxygenase 1 (IDO1), IDO2, or tryptophan 2,3-dioxygenase (TDO) (Fig. 1). Astrocytes can express both types of enzymes while microglia express only IDO [18, 23]. To a lesser extent, some neurons also possess IDO and/or TDO producing a minor portion of kynurenine [18]. Therefore, kynurenine is available in the CNS via the enzymatic activity of astrocytes, microglia, and some neurons. As well, kynurenine is actively transported into the brain by the large neutral amino acid transporter [19]."