Abstact:
Post-exertional malaise (PEM) is a hallmark symptom of Myalgic Encephalomyelitis/Chronic Fatigue Syndrome (ME/CFS). We monitored the evolution of 1,157 plasma metabolites in 60 ME/CFS cases (45 females, 15 males) and in 45 matched healthy control subjects (30 females, 15 males) before and after two maximal Cardiopulmonary Exercise Test (CPET) challenges separated by 24 hours, with the intent of provoking PEM in patients. Four timepoints allowed exploration of the metabolic response to maximal energy-producing capacity and the recovery pattern of ME/CFS cases compared to the healthy control group. Baseline comparison identified several significantly different metabolites, along with an enriched percentage of yet-to-be identified compounds. Additionally, temporal measures demonstrated an increased metabolic disparity between cohorts, including unknown metabolites. The effects of exertion in the ME/CFS cohort predominantly highlighted lipid- as well as energy-related pathways and chemical structure clusters, which were disparately affected by the first and second exercise sessions. The 24-hour recovery period was distinct in the ME/CFS cohort, with over a quarter of the identified pathways statistically different. The pathways that are uniquely different 24 hours after an exercise challenge provide clues to metabolic disruptions that lead to PEM. Numerous altered pathways were observed to depend on glutamate metabolism, a crucial component to the homeostasis of many organs in the body, including the brain. 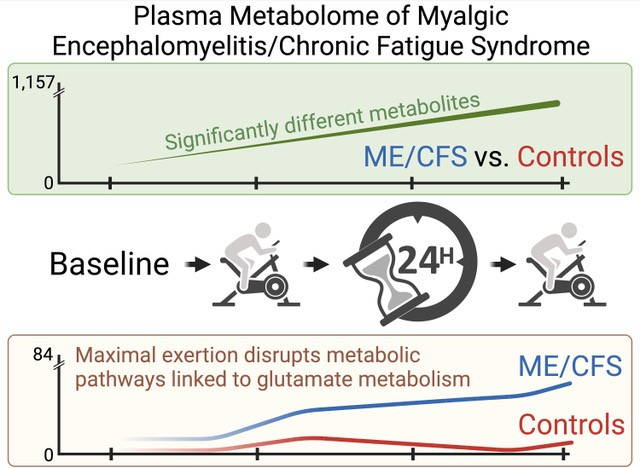 That Glutamate metabolism is altered should surprise no one around here. I’d love to know the details
Last edited: Apr 1, 2022

This one is hard to understand but it seems very good ! some familiar names in the author list.

I'm catching up on some old studies and this one is *kisses fingers* wonderful.

I can't believe it has taken us so long to get studies focusing on PEM. But if it's the defining characteristic of the disease we should be looking at what the body does during PEM.

Hanson and her lab have set out to see what happens when we exercise, measuring metabolites not once, not twice, not even thrice, but four times, before and after two cardio-pulmonary exercise tests taken 24h apart.

They find a lot (there's 1157 metabolites they measure)! the most interesting thing is that yes, patients are askew to start with. We then look mostly semi-normal during exercise, but then do weird things in recovery, as shown in the following chart. It has six panels. the three on the left show metabolite changes in controls, the right is patients. (Just the females. The male arm of the study had few people in it and not much hit statsitical significance)

What you see in the chart is the middle row is the most different between patients and controls. It shows blood metabolite changes during the 24h "recovery" period after the first CPET and before the second one. Instead of recovering mecfs patients are doing something else. (feeling , no doubt!). 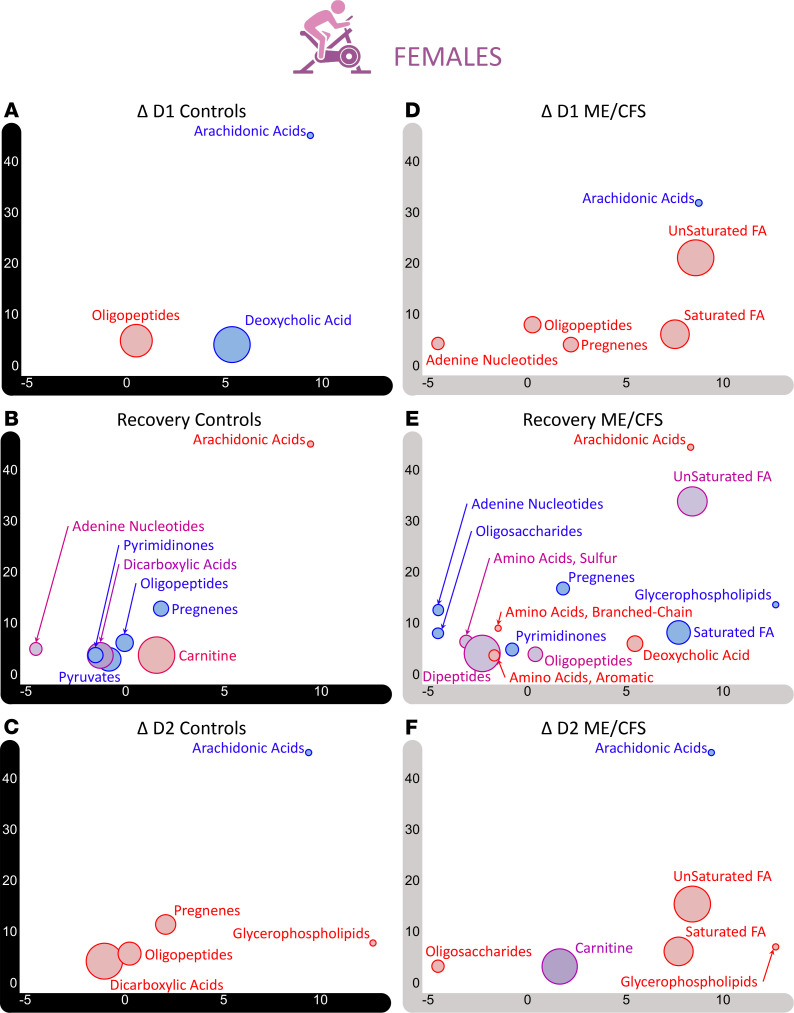 Further analysis (not in the chart above) finds the second exercise challenge looked different in patients to the first one, but the same in controls. That rings true to me. Trying to do exercise when you are already starting to get PEM is a different proposition to when you start from a relatively rested state!

The metabolomic differences during recovery were different between women and men, emphasising again the importance of controlling for sex in researching this disease.

One interesting (but frustrating) aspect of the analysis is it includes metabolites they can identify but know nothing about.. These have numbers not names. One such unknown metabolite, known as 15245, is the single most different substance in me/cfs patients. The next chart shows it. In healthy people it zooms up after exericse, relaxes back down during recovery. in patients it barely shifts during exercise (in fact is frequently unmeasurable) and and rises for many during recovery. This is useful info now only insofar as it shows somethig is off during exercise. But one day presumably some basic research figures out what 15245 is or does, and then boom, we know something really useful. (The paper says it is "possibly an acetylated organic acid." 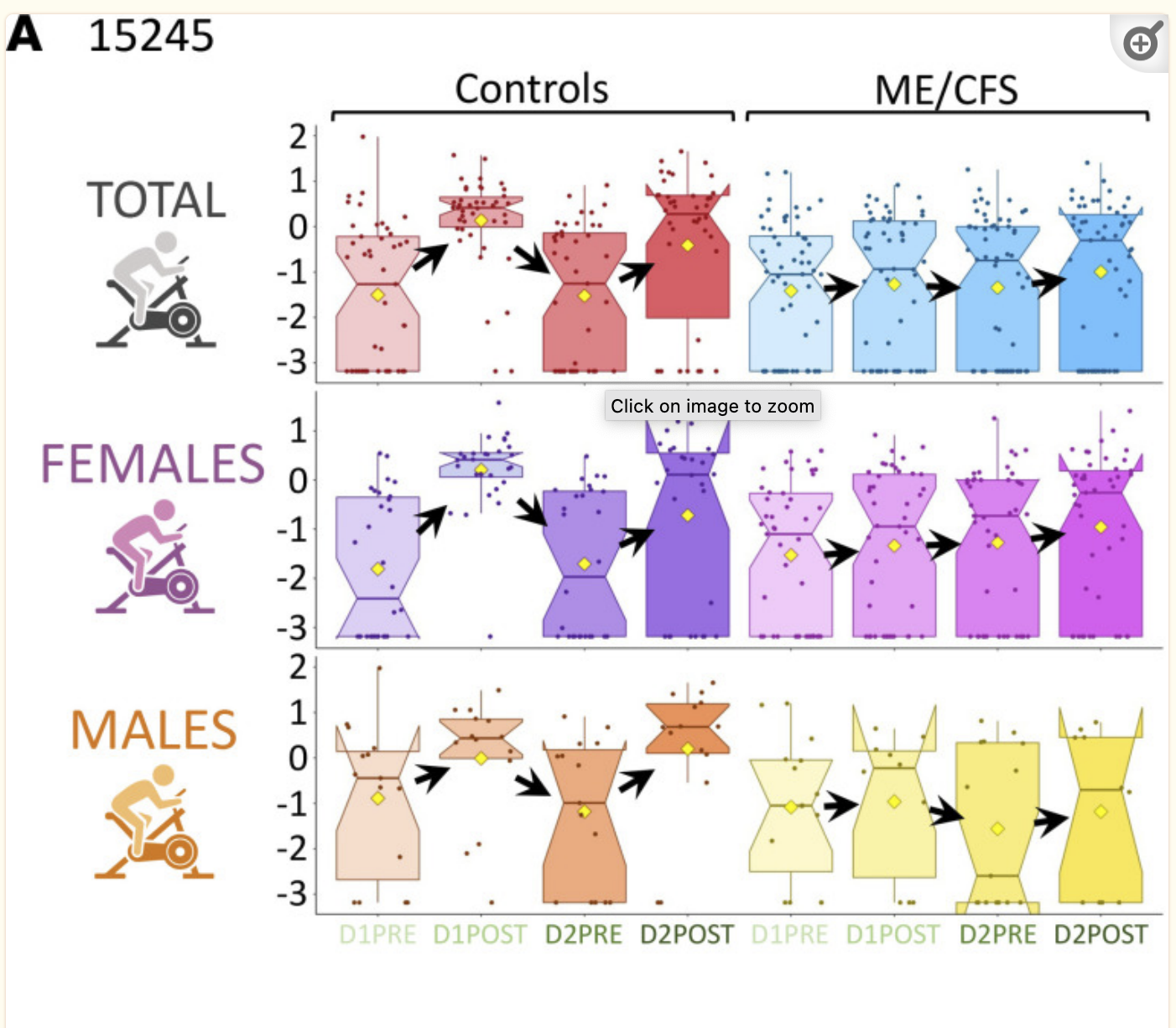 More generally ,the researchers find energy metabolism pathways disrupted, fatty acids, carinitine and butyrate. Also glutamate pathways (this latter one, I don't know how useful it is, glutamate seems to be involved in everything anyway).

I'd love them to do this study again, for a longer period and with even more timepoints. This captures patients entering PEM, but not exiting PEM (which is important for us, right?!)

Taking blood every 3 hours post exercise for say 48h, would be amazing, then every 12h for another few days. We could see some patients get and recover from PEM, while others stay stuck in PEM. Matching blood values to patient reports of whether they are recovered might elucidate what PEM is and how we can help defeat it.
Last edited: Nov 6, 2022

I have stated I am being poisoned, and this paper demonstrates the many poisons poisoning us.

thanks for the great summary @Murph - this is really important work. I wish I could make more sense of it.

so do we know anything about how they intend to follow up on the next steps with all this ?

Rufous McKinney said:
thanks for the great summary @Murph - this is really important work. I wish I could make more sense of it.

so do we know anything about how they intend to follow up on the next steps with all this ?
Click to expand...
It's not strictly a follow-up but the paper in this thread has more info on what I'm guessing is the same cohort.

In this one they look at immune cells rather than metabolites. monocytes are off at baseline and platelets go crazy during exercise. marrying together that info that with the knowledge of what metabolites are skewiff, that should narrow down the range of plausible causal hypotheses that fit the data.

you can also see hanson talking a bit about her plans in this video. it looks like there will be at least one more study on this cohort, looking at cytokines. 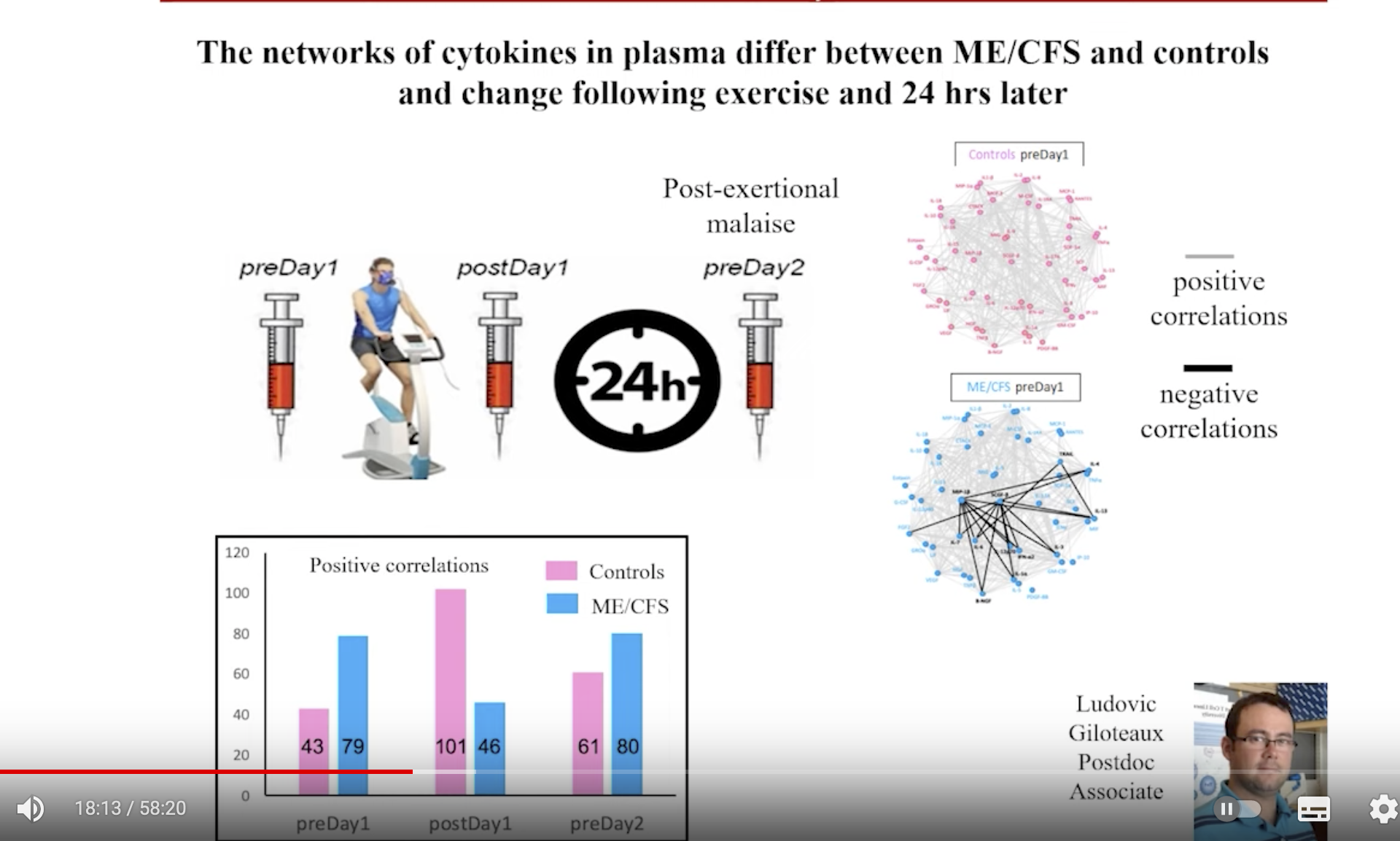 Pleased they got a lot of value out of the 2 CPETs these patients went through. I'm sure some of them got a lot worse from doing them.
Last edited: Nov 6, 2022
W

It looks like something abnormal is going on with the fatty acids and carnitine. I had a period where I needed supplemental carnitine to handle FAs (palmitic, I believe). However, that didn't seem to correlate with PEM; it was simply worse symptoms after eating the FAs. I think this study might be showing the mechanism of some of the symptoms of ME/PEM, but not necessarily the core dysfunction of ME.
You must log in or register to reply here.
Share: Facebook Twitter Reddit Pinterest Tumblr WhatsApp Email Link