Abstract
Introduction: Lyme disease is a tickborne illness that generates controversy among medical providers and researchers. One of the key topics of debate is the existence of persistent infection with the Lyme spirochete, Borrelia burgdorferi, in patients who have been treated with recommended doses of antibiotics yet remain symptomatic. Persistent spirochetal infection despite antibiotic therapy has recently been demonstrated in non-human primates. We present evidence of persistent Borrelia infection despite antibiotic therapy in patients with ongoing Lyme disease symptoms. Methods: In this pilot study, culture of body fluids and tissues was performed in a randomly selected group of 12 patients with persistent Lyme disease symptoms who had been treated or who were being treated with antibiotics. Cultures were also performed on a group of ten control subjects without Lyme disease. The cultures were subjected to corroborative microscopic, histopathological and molecular testing for Borrelia organisms in four independent laboratories in a blinded manner. Results: Motile spirochetes identified histopathologically as Borrelia were detected in culture specimens, and these spirochetes were genetically identified as Borrelia burgdorferi by three distinct polymerase chain reaction (PCR)-based approaches. Spirochetes identified as Borrelia burgdorferi were cultured from the blood of seven subjects, from the genital secretions of ten subjects, and from a skin lesion of one subject. Cultures from control subjects without Lyme disease were negative for Borrelia using these methods. Conclusions: Using multiple corroborative detection methods, we showed that patients with persistent Lyme disease symptoms may have ongoing spirochetal infection despite antibiotic treatment, similar to findings in non-human primates. The optimal treatment for persistent Borrelia infection remains to be determined.

I've been a lot less active on the forums over the last couple years, but I always figured I'd be kept up on the latest by checking the threads here from time to time as well as the awesome articles over at HealthRising written by @Cort. And yet there's a number of interesting developments in the Lyme world that haven't been covered on either of these forums.

Although the above study was referred to in a thread on PR, I guess it didn't feature prominently enough to grab my attention. This article is a turning point in the Lyme world and deserves its own thread.

You want persistence? This is a very solid study, as far as I can see, and I can't believe there's no fanfare around it. Even the Julie Rehmeyer article published last year on the controversies surrounding Chronic Lyme failed to mention this study. Am I missing something?
D

Dufresne said:
You want persistence? This is a very solid study, as far as I can see, and I can't believe there's no fanfare around it. Even the Julie Rehmeyer article published last year on the controversies surrounding Chronic Lyme failed to mention this study. Am I missing something?
Click to expand...
I seem to recall writing about it somewhere. It's pretty cool. Usual authors. It should matter, but perhaps it got drowned out in the noise of the IDSA/Insurance companies lawsuit. Speaking of which:

Kaiser settling could signal a change in the winds. We will see. Studies like the above can only help.

The Long-Term Persistence of Borrelia burgdorferi Antigens and DNA in the Tissues of a Patient with Lyme Disease
https://forums.phoenixrising.me/thr...tissues-of-a-patient-with-lyme-disease.78324/
G

Below is a list of the peer reviewed studies in the literature that demonstrate the persistence of BB in humans after standard antibiotic therapy - along with the method used to prove persistence ( this was done a few years ago - there will be more to add to the list today).

There is no shortage of evidence that this is the case - there is just a lack of political will and accountability to change policy. 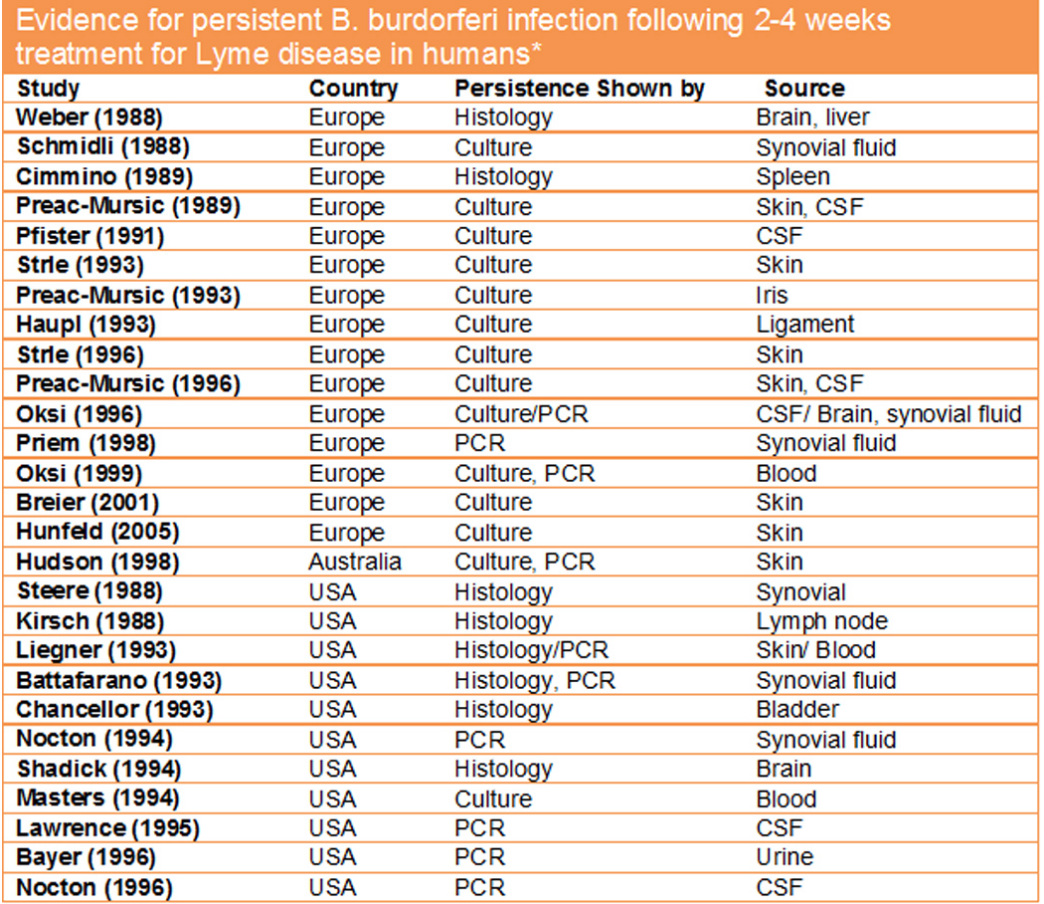