In addition, the work supports a previous observation by GUMC investigators of two variants of GWI. The disorders share commonalities, such as pain, fatigue, cognitive dysfunction and exhaustion after exercise.

Their study, published in Scientific Reports, lays groundwork needed to understand these disorders in order to diagnosis and treat them effectively, says senior investigator, James N. Baraniuk, MD, professor of medicine at Georgetown University School of Medicine. Narayan Shivapurkar, PhD, assistant professor of oncology at the medical school worked with Baraniuk on the research.

The changes in brain chemistry -- observed in levels of miRNAs that turn protein production on or off -- were seen 24 hours after riding a stationary bike for 25 minutes.

"We clearly see three different patterns in the brain's production of these molecules in the CFS group and the two GWI phenotypes," says Baraniuk. "This news will be well received by patients who suffer from these disorders who are misdiagnosed and instead may be treated for depression or other mental disorders."
Click to expand...

Here is the link to the full paper:

Introduction
Chronic Fatigue Syndrome (CFS)1,2,3,4 and Gulf War Illness (GWI)5,6,7,8are nociceptive, interoceptive, fatiguing illnesses that are currently defined by symptoms and exclusion of other conditions in their extensive differential diagnoses9. CFS developed from medical traditions of neurasthenia10 and viral infection11, and GWI from “signs, symptoms, and ill-defined conditions (SSID; International Classification of Diseases-9th Revision, Clinical Modification (ICD-9-CM) codes 780-799)”12. These legacies are being revised based on new discoveries about disease pathogenesis13,14,15,16,17,18. With the revisions comes an increasing need for objective biomarkers to define and diagnose these diseases.
Click to expand...

The Daily Mail reports on the study and prints a ridiculous photo of a yawing typist, illustrating once again that they just 'don't get it', but at least the article is one step forward.


Chronic fatigue syndrome is NOT all in the mind- but caused by changes in brain chemistry, a study finds
By KAYLA BRANTLEY FOR DAILYMAIL.COM

Chronic fatigue syndrome is not a psychological disorder as previously thought, researchers claim after finding evidence that the condition is caused by changes in brain chemistry.

Controversy has raged for nearly 30 years on whether the debilitating condition that causes pain, physical and mental fatigue and cognitive dysfunction was a genuine illness as critics speculated that it was all in the mind.

Now researchers have found changing levels in a brain molecule called miRNA in patients, which is responsible for turning protein production on and off, subsequently causing the tiring symptoms.

The findings lay the groundwork to better treat and understand the disorder that affects nearly three million Americans. 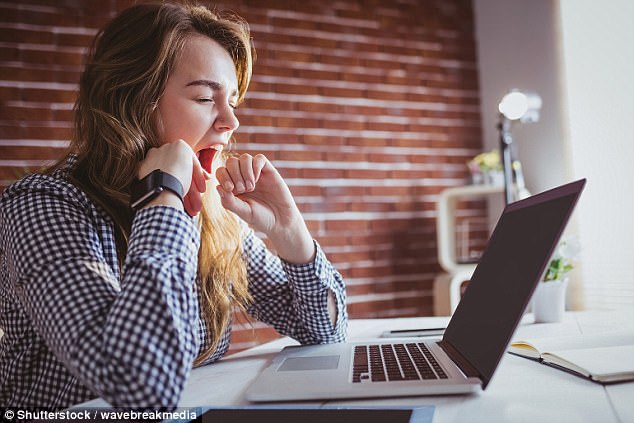 +1
Chronic fatigue syndrome and Gulf War Illness are caused by changes in brain chemistry and are not psychological disorders as it was previously thought, a study from Georgetown University found

Not a good day for Sir Simon Wessley.

He got it wrong about Camelford.

He got it wrong about GWI

He got it wrong about ME.

isn't it about time he retired before he embarrasses himself further?

Countrygirl said:
isn't it about time he retired before he embarrasses himself further?
Click to expand...
Not as much fun for us than if he had a very public fall from grace

lilpink said:
Not as much fun for us than if he had a very public fall from grace
Click to expand...
I doubt that will happen, as he is an Establishment figure. They are well protected as we know.

Countrygirl said:
I doubt that will happen, as he is an Establishment figure. They are well protected as we know.
Click to expand...
The Teflon coating of many a big cheese (to mix metaphors) can wear thin. In every walk of life those who think they can behave however they like and get away with it are finding that there is a day of reckoning after all.

"CFS was distinguished from the other groups by having significant reductions of miR-126-5p, miR-186-3p, miR-19b-3p, miR-92a-3p and miR-505-3p compared to the nonexercise cfs0 group (Fig. 10). Specificities and sensitivities were about 0.82 for miR-328, miR-608 and miR-92a-3p. The large number of exercise – induced reductions in miRNAs differentiated CFS from SC and the GWI phenotypes"


"CFS had 12 diminished and zero elevated miRNAs after exercise indicating its pathophysiology and responses to exercise were unique compared to GWI and control subjects."

Thanks for posting @Countrygirl! I skimmed the paper very quickly, I'm not a scientist at all, but this seems huge to me, finding distinct signatures for CFS and 2 variations of GWI in cerebrospinal fluid, post-exertion. When rested, these abnormalities were not present. This seems potentially a game-changer to me, or maybe I'm overly optimistic?
D

Sometimes in people with channelopathies, neurologists will evoke a response through exercise or eating something. This evocation defines or helps parse down on the diagnosis.

I cannot get my head around the semantics, or if there is any meaningful distinction between CSF abnormalities leading to a direct diagnosis, or one step removed via PEM.

BTW, I think there may be more coming out of that team. As I recall, the study protocol included two fMRIs - one before, and one after exercise.
Last edited: Nov 10, 2017

Countrygirl said:
Not a good day for Sir Simon Wessley.

He got it wrong about Camelford.

He got it wrong about GWI

He got it wrong about ME.

isn't it about time he retired before he embarrasses himself further?
Click to expand...
and other things

it's one thing to make a screw up on an esoteric part of Science that has no effect on people, that gets you disgraced and maybe lose a job.
it is something completely different to actively prevent research, treatment and humane behaviour to seriously ill people, that should get you jailed for murder.
A

sigh, daily mail people shouldn't write science articles unless they have a reasonable level of experience with it,
trying to say it causes it is completely misleading
R

ash0787 said:
sigh, daily mail people shouldn't write science articles unless they have a reasonable level of experience with it,
trying to say it causes it is completely misleading
Click to expand...
Meh.
It's not technically accurate, but the author gets a hell of a pass for the first words being
Chronic fatigue syndrome is not a psychological disorder as previously thought
Click to expand...
I'd almost give them a pass if they gave the reason as problems with the midichlorians after that.

Am I going mad or do the captions in the graphics not match the graphics? (a) appears to refer to miR -99, but the caption say miR-22 and the description of the distributions makes no sense either. 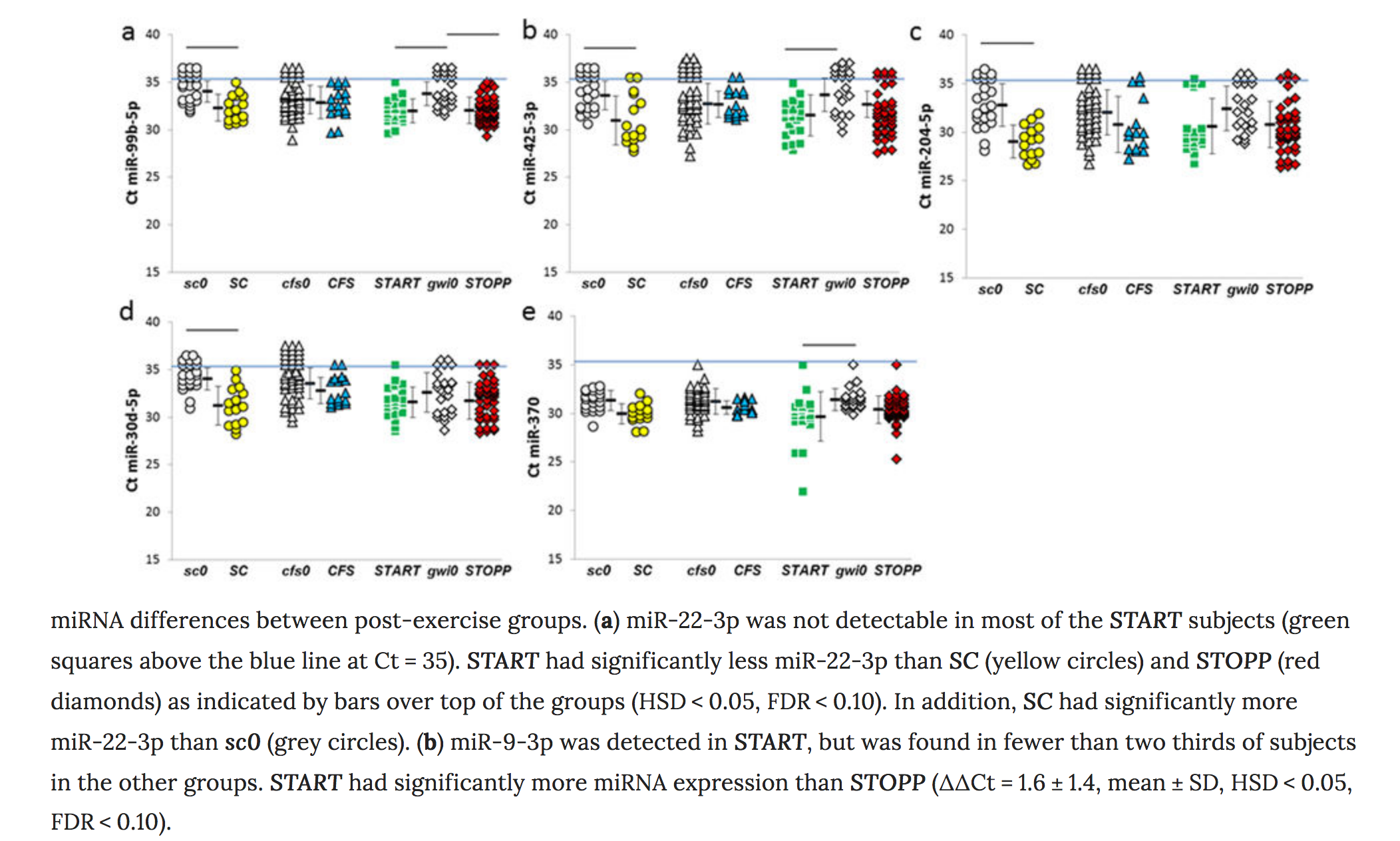 I've found the same sort of issue in trying to interpret all the graphs. I don't know much about miRNA but I'm trying to learn and this is very confusing.

EDIT: First 4 graphics are okay. Then some of them seem to be offset e.g. caption on graph 8 refers to graph 7. Others make no sense.

EDIT 2: I emailed James Baraniuk who seems to be a very nice man and he is trying to get the captions fixed.
Last edited: Nov 16, 2017

Dolphin said:
Basic question here: why do the sample sizes vary so much in the non-exercise and post-exercise groups? Are they completely different groups or was data missing for some? I thought everyone did exercise test? For example, "non-exercise" gulf war: n=22. Post-exercise, n=64 (22+42). For CFS, non-exercise group n=43; post-exercise, n=16.
Click to expand...
Just guessing, but I'd think that there were some CFS patients who were too severe or who the researchers ethically decided probably shouldn't exercise.

JaimeS said:
Just guessing, but I'd think that there were some CFS patients who were too severe or who the researchers ethically decided probably shouldn't exercise.
Click to expand...
But why would there be a lot more GWI patients in the post exercise group than at baseline?

@Dolphin Their methods section is kind of a mess but my read was theythey have two broad groups, one tested after sleep, one after exercise.

What they haven't done is give the same person two lumbar punctures, before and after exercise. (so far as I can tell) Perhaps because of the nature of that procedure?

The sample sizes are different in the different broad groups. The reason they have so many post-exercise GWI patients is, I suspect, they are trying to get a good sample size on each of their two hypothesised groupings, START and STOPP (first one has tachycardia, second one doesn't).
You must log in or register to reply here.
Share: Facebook Twitter Reddit Pinterest Tumblr WhatsApp Email Link