Myalgic encephalomyelitis/chronic fatigue syndrome (ME/CFS) is a complex disease with no known cause or mechanism. There is an increasing appreciation for the role of immune and metabolic dysfunction in the disease. ME/CFS has historically presented in outbreaks, often has a flu-like onset, and results in inflammatory symptoms. Patients suffer from severe fatigue and postexertional malaise. There is little known about the metabolism of specific immune cells in patients with ME/CFS. To investigate immune metabolism in ME/CFS, we isolated CD4+ and CD8+ T cells from 53 patients with ME/CFS and 45 healthy controls. We analyzed glycolysis and mitochondrial respiration in resting and activated T cells, along with markers related to cellular metabolism and plasma cytokines. We found that ME/CFS CD8+ T cells had reduced mitochondrial membrane potential compared with those from healthy controls. Both CD4+ and CD8+ T cells from patients with ME/CFS had reduced glycolysis at rest, whereas CD8+ T cells also had reduced glycolysis following activation. Patients with ME/CFS had significant correlations between measures of T cell metabolism and plasma cytokine abundance that differed from correlations seen in healthy control subjects. Our data indicate that patients have impaired T cell metabolism consistent with ongoing immune alterations in ME/CFS that may illuminate the mechanism behind this disease.
Click to expand...

Thanks for posting this key Hanson/Peterson study, @Diwi9. Hopefully the CDC will take note and act.

It is clear that the immune system plays a role in ME/CFS.

Furthermore, patients with ME/CFS appeared to have altered relationships between plasma cytokine abundance and T cell metabolism, in which proinflammatory cytokines unexpectedly correlated with hypometabolism.

Such a dysregulation may indicate that ME/CFS T cells have lost responsiveness to some proinflammatory cytokines.

Along with hypometabolism in immune cells, this is consistent with a possible ongoing infection (42), though such an infectious agent has not yet been identified.

A high priority moving forward will be to determine the mechanism behind hypometabolism in ME/CFS T cells as well as how altered metabolism affects the function of these cells.

[My bold and paragraphing]

This data confirms a lot of what we already knew about ME/CFS immune hypometabolism, however the data below show some really interesting insights. Another thing to note (and is in the supplementary data) is that total plasma cytokine levels are not statistically different between ME/CFS and controls. However - isolated CD4/CD8 cells have drastically different cytokine release patterns in response to stress, as represented below. This again highlights the oddity of this disease - these cells are not acting normally, however there is no effective change in cellular cytokine levels.

All of these oddities may wind up being balanced out globally within the body (reaching a sort of macro-regulated state), however locally would result in weirdness at the site of stressors. 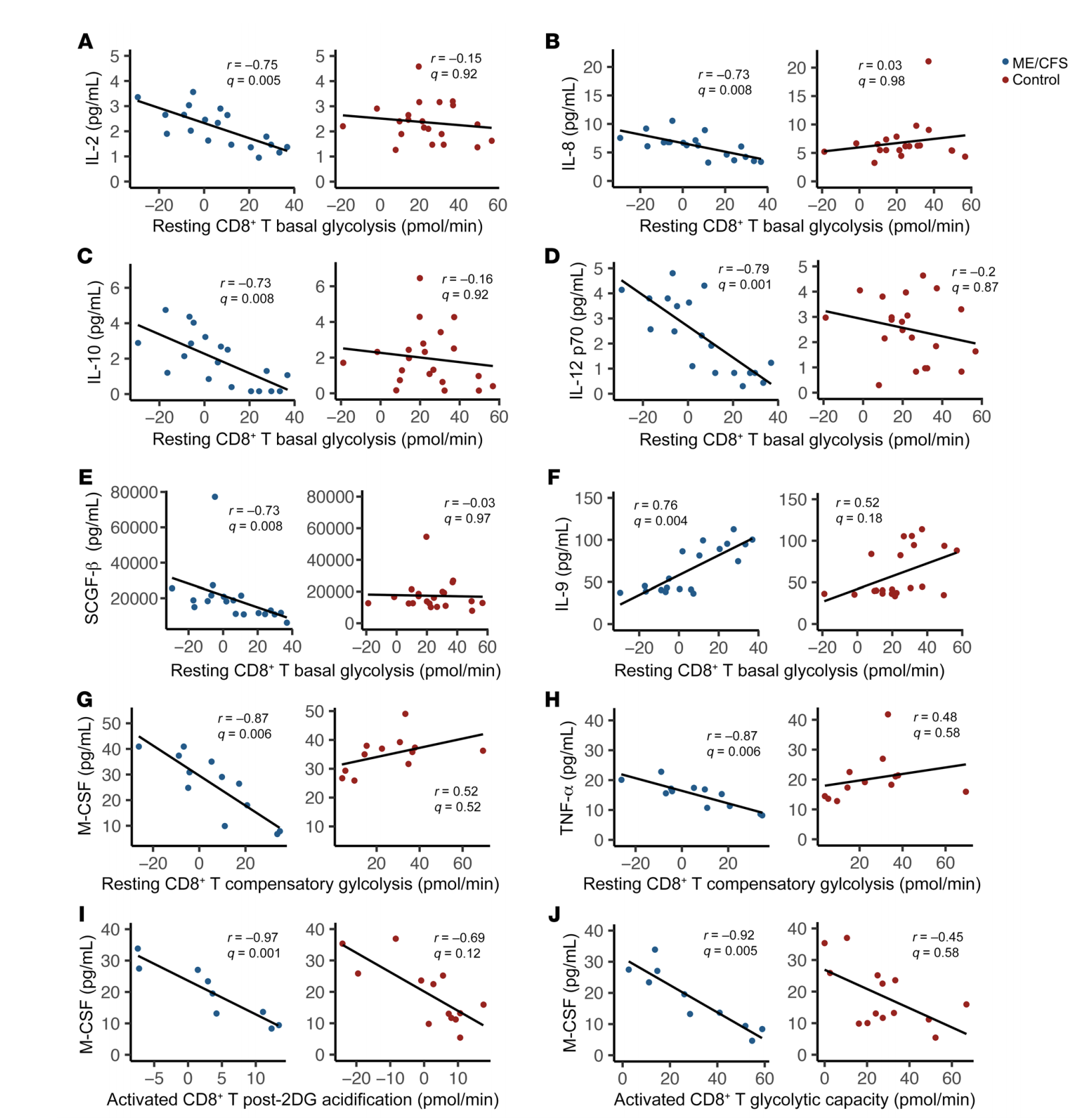 I'm not sure how it might affect t-cell function in regards to CD4+ and CD8+, but maybe someone else can figure out whether alpha-synuclein might be involved. This link is specific to Parkinson's Disease: https://www.ncbi.nlm.nih.gov/pmc/articles/PMC4405142/

It has a nifty image showing enteric neurons with aggregated a-syn, leading to microglial cells attacking neurons in the brain. (I couldn't see a simple way to post just the image.)

Wishful said:
It has a nifty image showing enteric neurons with aggregated a-syn, leading to microglial cells attacking neurons in the brain. (I couldn't see a simple way to post just the image.)
Click to expand...
Is this the image you are speaking of? 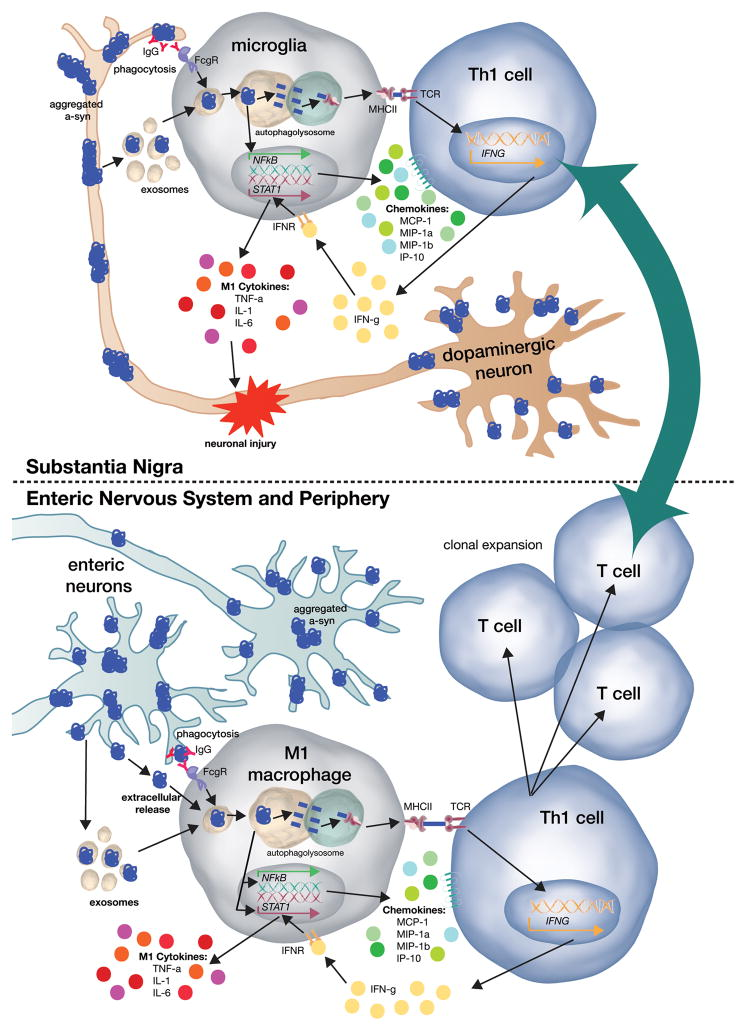 Wishful said:
I'm not sure how it might affect t-cell function in regards to CD4+ and CD8+, but maybe someone else can figure out whether alpha-synuclein might be involved. This link is specific to Parkinson's Disease: https://www.ncbi.nlm.nih.gov/pmc/articles/PMC4405142/

It has a nifty image showing enteric neurons with aggregated a-syn, leading to microglial cells attacking neurons in the brain. (I couldn't see a simple way to post just the image.)
Click to expand...
I'm not sure if a-syn would be involved here - but researching cuminaldehyde a bit more - I think it might have something to do with NF-kB / LOX inhibition. Cuminaldehyde is a fairly potent LOX / NF-kB inhibitor, and is being investigated as a potential alternative to traditional COX2 based NSAIDs. See attached as reference.

NF-kB is a pretty notorious pathway for autoimmunity, inflammation, and metabolic disease - so a potent and safe NF-kB inhibitor would be interesting for management of ME/CFS.

Yup, that's it. I used to be computer literate, but I never did much with images, so my skills there are pretty much non-existent.

Those PWME who are convinced that their gut is the source of their ME might want to follow up on this as a possible explanation.
W

Yes, LOX inhibition sounds like another possible explanation for why cumin blocked my PEM. It might even be a better fit. It's interesting that vanillin was about twice as effective as a blocker. I'd test that as a blocker (Vanilla is yummier than cumin!), except that I no longer seem to have physically-induced PEM to block. I'm certainly not going to complain about that, but it does make further experimentation problematical.

Has anyone noticed PEM-blocking from vanilla? Yes, you can consider it an excuse to eat a huge amount of your favourite vanilla treat.