ME/CFS and the Poverty Diet 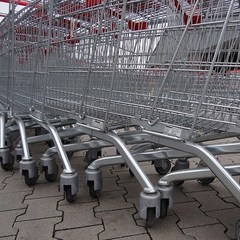 It is a no-brainer (pardon the ME/CFS pun) that when you can't work, you aren't making any money. It is less obvious, to many who haven't been through it, that people who can't work because of poor health are not automatically protected by any kind of federal safety net - social, financial or otherwise.

Alan and I had no such safety net provided by our government. We were luckier than some in that a few family members would contribute food and money to our household, some occasionally, and some on a regular basis. But even with such philanthropy, there was never enough money to pay all our bills and buy adequate food. Not for years on end.

We were experts on squeezing everything possible out of a nickel. We could feed a family of seven on three dollars a day. Not well, but enough to fill everyone's bellies. We sought out the day-old bread, the sales. We bought stuff we didn't much like because it was cheap. We bought white bread, noodles, margarine, few vegetables, rarely fruit or juices. Meat was cheap cuts and not too much of it.

As you may imagine, people who are sick to start with and who must live on the Poverty Diet for years, even decades, are being set up for worse health problems than they started with. A little over 10 years ago, I stumbled upon the Low Carb Diet, and learned that it worked much better for me than the Poverty Diet. We were in a situation for a couple of years when we could afford to buy the appropriate foods, and I began to feel better, to think better, and lost 50 pounds in the process.

Five years ago our finances took a solid dive and we were all on the Poverty Diet again. We were able in those days to pay only about 25 percent of our bills each month, juggling payments wildly, and somehow managing not to be without light or heat, or foreclosed upon. We wished we could live on our old Poverty Diet once again. We aspired to one day be able to afford the Poverty Diet we'd choked down in the past.

To eat, we went to the local food bank. This meant we only had to come up with a few dollars for groceries each month. But there was a problem with the Food Bank Diet, which is, let's face it, another version of the Poverty Diet.

This is not the fault of those who work in the food banks. We were so grateful that these wonderful people cared about what happened to us. We weren't used to people caring anymore. Being allowed to walk in there and be given food with no strings attached, no suspicion, no judgment, made me weep the first time I went in. They were so decent, and we hadn't seen a lot of that in awhile.

The problem with the food bank was that most of the food was processed, high carb, lots of bread, bagged noodles, boxed noodles with powdered sauces, boxes of cereal, potatoes, rice ... None of which I can safely eat.

There was some protein. A dozen eggs, a package or two of hot dogs, cans of tuna, cartons of milk, there would be enough to keep me going ... for a few days out of each month. Cans of green beans or peas, tomato sauce, frozen carrots, cheese and peanut butter, all contributed in a limited fashion to some nutritional health. But most of the time I was eating canned spaghetti, macaroni and cheese, plain rice and noodles with margarine.

I gained back 30 of the pounds I'd lost on the Low Carb Diet before the Food Bank Diet. One winter I contended with hair falling out, and distressing pains, sparks, swirling sensations and little explosions in my nervous system.

The more I partook of this Diet, the worse my cognitive problems became. I would have food-induced panic attacks after too much wheat at a time. I was hungry all the time, while I was slowly gaining weight. Eating a dish of rice would leave me hungrier after I ate it than if I had eaten nothing at all, apparently due to my inability to properly metabolize most carbs.

The only other option, though, was to not eat at all. So even though I could feel myself sliding health-wise, cognitively, and said goodbye once more to my girlish figure ... it could have been worse. For some people it is worse. I know some people who can't work due to health issues, live in poverty and who manage on less than we had. But they are paying the penalty as their overall health is pushed further downhill.

It is a wonderful thing to be able to eat decently. And apparently it is a privilege, not a right. Because many people are stuck with a Poverty Diet ... and many others even less fortunate can only aspire to attain it some day. But it seems to me that everyone should be able to move beyond the Poverty Diet and its kindly-meant counterpart, the Food Bank Diet, and have a decent chance to heal.

What kind of diet has ME/CFS brought into your home?

Phoenix Rising is a registered 501 c.(3) non profit. We support ME/CFS and NEID patients through rigorous reporting, reliable information, effective advocacy and the provision of online services which empower patients and help them to cope with their isolation.

There are many ways you can help Phoenix Rising to continue its work. If you feel able to offer your time and talent, we could really use some more authors, proof-readers, fundraisers, technicians etc. and we'd love to expand our Board of Directors. So, if you think you can help then please contact Mark through the Forum.

And don't forget: you can always support our efforts at no cost to yourself as you shop online! To find out more, visit Phoenix Rising’s Donate page by clicking the button below.

It's a good start. Even better would be initiatives that ensure that children eat fruit and veg from an early age, such as this one in the UK:

I'd like to see schemes like this extended to older children, and to workplaces, for example. One crazy thing I see in the UK is the junk food available in hospitals, both in vending machines and in on-site shops. When I have been in hospital as an in-patient or outpatient I have not even been able to find straightforward packets of nuts, for example - only nuts that have been given various coatings like honey or chocolate!

I was astonished to see a teenage girl on UK TV who could not identify a cauliflower!
MeSci said:
It's a good start. Even better would be initiatives that ensure that children eat fruit and veg from an early age, such as this one in the UK:

I'd like to see schemes like this extended to older children, and to workplaces, for example. One crazy thing I see in the UK is the junk food available in hospitals, both in vending machines and in on-site shops. When I have been in hospital as an in-patient or outpatient I have not even been able to find straightforward packets of nuts, for example - only nuts that have been given various coatings like honey or chocolate!

I was astonished to see a teenage girl on UK TV who could not identify a cauliflower!
Click to expand...
This IS good news !

But yeah 5-7 is too little - poor 8 year olds missing out on their strawberries !

I spent loads of time in hospitals during my Mothers Cancer. And I too was astonished by the lack of nutrition.

I did actually fill out feedback forms to kill time.

I object to junk food being avsilable in hospital full stop. The actual nutrition in hospital meals is rubbish.

I would like to see so called places of healing set the example in good fluid intake and nutrition.

It was the Cancer hospital I was taken back with - at the cafe - the old lady asked me if i wanted my food heated in a microwave or the grill! She said a lot of people there dont want microwaved foods.

It must be demand from patients doing their own research ?

Mental hospitals too encourage dehydration through caffeine, sugar and junk. No nutritional status tests are done.

I see for example that a lack of Zinc can cause Anorexia and a distorted mental body image. When corrected, appetite returns as does normalised mental feelings of body!