Has anyone tried the Marshall Protocol?

I've only just been introduced to it and can't quite Get my head round it now with PEM brain fog.

I tried the MP for many years but had to stop due to unbearable side-effects which were probably caused by a reactivation of EBV.

I would be very reluctant to go on the MP without having a doctor who is knowledgeable about ME/CFS and with a lot of experience with the MP.

(I will try to add my thoughts and experiences with the MP further down the thread)
Last edited: Oct 6, 2021

Art Vandelay said:
I would be very reluctant to go on the MP without having a doctor who is knowledgeable about ME/CFS and with a lot of experience with the MP.
Click to expand...
+1 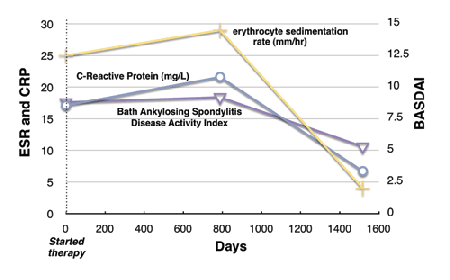 Halfway down the main protocol page - is not accurate for ME biomarkers. Most ME patients have low esr of say 2 (like mine is) - not 25 like this 50 year old man (who didn't have ME). Also my c reactive protein has never been high...doesn't mean I don't have inflammation in the body or brain.

Just thought I'd point this out as it might not be clear on first glance.

The protocol page also seems horrendously unclear on exactly what the person should be taking...maybe I missed it! But lack of specifics usually doesn't give me much faith.

Saying that I couldn't find much info about exact doses for the Pridgen protocol (for FM) https://www.healthrising.org/blog/2...ld-it-work-in-migraine-a-report-suggests-yes/ but apparently that works for many FM patients.

I looked into it and I would be very wary of doing it. They say, when you're getting severe symptoms and feeling worse, then "that means it's working!". And they say the protocol anf eeling worse can last multiple years, like 3+, 5+, or even 8-10 years. So, hard to really trust them. Also, not a super firm basis in their science.

I know a guy on Joshua's protocol who's still struggling and crashing all the time. He's been on it about 6 months. It does bother me when these protocols don't quite work out as planned and researcher's insist on continued use without any biomarkers of improvement.

Mind you I guess it's no worse than patients being pilled up with chronic uti infections without actually finding out the cause or bacteria causing the infection.

I have been meaning to write a summary of my thoughts on the MP for some time. I hope nobody minds if I post them on this thread rather than creating a new one.

Hopefully this won't be too disjointed.

I was on the MP for about 10 years. Clearly I wouldn't have remained on it for so long if I didn't get any benefit from it or if I didn't think there was something to it. The lack of any other treatment options was a factor too.


1) Medical support
As I said above, I would be very hesitant to try the MP without a knowledgeable doctor. The lack of a MP-aware doctor in my country was one of the reasons why I stopped.

The effects of the MP on your symptoms can be quite unsettling and you will need a doctor to be able to ascertain whether any new symptoms are side-effects, immunopathy or something else that needs investigating.

Olmesartan is processed by the kidneys, so you will also need regular blood tests at least early on.


2) Effects of the medication
The medication used in the MP is olmesartan. After a few weeks of taking it, I suddenly found that my sensitivity to light increased dramatically. I was unable to watch TV or use a computer without sunglasses. I couldn't leave the house during the day. Leaving the house at night was problematic given that even traffic lights were often too bright for my eyes.

However, my pain and inflammation virtually disappeared and my brain fog was better. I was able to read books for the first time in years.

Unfortunately I crashed more regularly and for longer. Olmesartan does seem to spark the immune system and that can be intense to say the least.

I will say that the first time I took Olmesartan was quite miraculous. After 20 minutes, it was almost as if I could feel tiny switches in my body turning off the pain and inflammation radiating out from my gut.

Olmesartan also could shorten the duration of my PEM but this was somewhat hit and miss.


3) Length of time
Initially the MP was sold to me by a doctor as being a year-long treatment. However it is pretty obvious now that people are remaining on the MP for 10 years or longer without making a full recovery. I have spoken to a number of people who have recovered after being on the MP for 5-10 years, however whether the MP was responsible is moot in the absence of a proper clinical trial.

@Art Vandelay,
How much mg is needed to spark the immune system?

I may want to try it with low doses first in order to get not too much of negative symptoms.

Did you take vitamin D at that time, too?

kewia said:
How much mg is needed to spark the immune system?

I may want to try it with low doses first in order to get not too much of negative symptoms.

Did you take vitamin D at that time, too?
Click to expand...
You really need to ask a MP-aware doctor or on the MP site these questions. (Note: that the MP recommended dosages are a very high dosage of Olmesartan.)

I have heard of some people with ME/CFS seeing side-effects on the standard blood pressure dose (ie, 40mg). One person tried taking only 10mg per day but they didn't get any immunopathy with that dose. It seems to be very individual. Bear in mind that there are no published studies demonstrating the correct dose or the safety of Olmesartan on people with ME/CFS.

Vitamin D made me ill even prior to starting the MP but even more so while on it. The MP people say that you need to avoid vitamin D as much as possible and taking vitamin D will stop the olmesartan from working.

I wouldn't recommend doing the MP unless you are under the care of a MP-aware doctor. Your kidney function and blood pressure in particular needs monitoring

Also be cautious that Olmesartan may make you very sensitive to light. I could not leave the house for years during the day because it was so bad and it was even difficult at night because even streetlights were too bright. Some people have said that this extreme light sensitivity remained even when they stopped the olmesartan.

You should join the MP forum and they will answer your questions: https://www.marshallprotocol.com/
and read this site thoroughly beforehand: https://mpkb.org/

Overall, people with ME/CFS need to be cautious with taking these medications even for just a short period of time. This is not like experimenting with a new vitamin for example.
Last edited: Jan 3, 2022
K

Art Vandelay said:
You really need to ask a MP-aware doctor or on the MP site these questions. (Note: that the MP recommended dosages are a very high dosage of Olmesartan.)
Vitamin D made me ill even prior to starting the MP but even more so while on it. The MP people say that you need to avoid vitamin D as much as possible and taking vitamin D will stop the olmesartan from working.
Click to expand...
Just out of curiosity, was your active vitamin D level measured before the MP?
Maybe it is too high, and therefore you receive these symptoms.

For me, it is quite the opposite. Vitamin D seem to reduce my muscle pressure and spasms and sunlight doesn't make me bad, but I have an active vitamin D level which seems to be a bit on the lower range and an inactive which is still below the recommended concentration despite taking vitamin D 2.5k daily.
K

It seems the autoimmunity research foundation (a foundation endowment for studies about the MP protocol) conducted two surveys to track MP therapy improvement.

I find it hard to gather the right percental share for cfs/me improvement regarding this categorization.

However, these surveys were not conducted independently of Trevor Marshall. I wish we would have more studies about the MP.

kewia said:
Just out of curiosity, was your active vitamin D level measured before the MP?
Maybe it is too high, and therefore you receive these symptoms.
Click to expand...
Yes, I had vitamin D disregulation: Low 25 D and very high 1,25 D.