Article Invisible Disability: A Tough Fight and a Big Win for Patients in Spain

Invisible Disability: A Tough Fight and a Big Win for Patients in Spain
​
In Spain, patients with neuroimmune diseases such as fibromyalgia or myalgic encephalomyelitis/ chronic fatigue syndrome (ME/CFS) have been disgusted at their government's refusal to recognize them as seriously disabled human beings. This week brought news of a big step forward.

May 9, 2019: Chanting "Yes, we exist! We are not invisible!" patients and medical professionals from 170 different patient groups demonstrated throughout Spain, demanding the retraction of the government's disability guidelines for neuroimmune diseases. Image courtesy of CONFESQ.​
By Eric Pyrrhus

In 2019 the Spanish government agency that oversees disability pensions, the National Institute for Social Security (INSS), issued new guidelines for evaluating the disability of people living with neuroimmune diseases such as fibromyalgia or ME/CFS. Soon after, Dr. Joaquím Fernández Solà, a professor of medicine at the University of Barcelona, issued a strongly worded letter condemning the new guide:


"I consider that this guide does not meet the minimum criteria of scientific consistency, is not created by any panel of experts on the subject, [...] is not based on proven scientific evidence, does not contemplate the principal physiopathological bases of these illnesses, contrasts with previously established protocols, and contains many unsubstantiated claims that can be prejudicial for patients affected by these illnesses. [...] Because of all this, I propose that the guide be annulled in its entirety."​
- Dr. Joaquím Fernández Solà​
​ 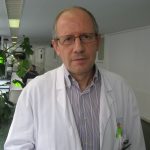 Dr. Joaquím Fernández Solá was one of the first to publicly criticize the INSS guidelines. Image courtesy of Dr. Joaquím Fernández Solá.
​
A coalition of patient groups in Spain, CONFESQ, immediately started a petition to retract the guide. CONFESQ noted that the new guide would be distributed to all primary care physicians in the country and would determine whether patients with neuroimmune conditions could receive their proper disability pensions. The petition has gathered almost 30,000 signatures to date.

What was the most important objection in the petition? Point number one in the petition states that "the inclusion of Somatoform Disorder among the diseases actually covered by the guidelines has no medical or scientific justification. This disorder in fact acts as a filter, veiled or explicitly denying the reality of these diseases as organic pathologies and entities of their own, ignoring the current scientific evidence."

The stakes are indeed high. According to a 2019 scientific study which looked at over 1000 Spanish ME/CFS patients, 59% of patients with ME/CFS were unemployed and patients with worse symptoms were much more likely to be unemployed than those with minor symptoms. Fibromyalgia was found in 62% of the unemployed, but only 46% of the employed.

How many unemployed patients with a neuroimmune disease successfully receive a disability pension? 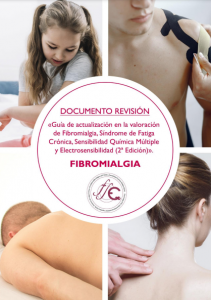 In response to inadequate government guidelines on fibromyalgia, patient groups produced their own exhaustive analysis. Image by CONFESQ.
​
According to a 2020 press release issued by CONFESQ, the coalition of patient groups, the Spanish government agency initially agreed to meet with the patient groups.

And in a 2021 press release, CONFESQ stated that it had repeatedly requested a follow-up meeting, but had not received any response to these requests from INSS, the Spanish government agency that oversees disability pensions.

In the two press releases, CONFESQ argued that there were three reasons why it was even more urgent to quickly correct the inadequacies of the INSS guidelines:

1) First, the COVID-19 pandemic could possibly lead to a surge of new patients.

2) Second, the European Parliament approved a resolution in June 2020 requesting additional funding for research into ME/CFS -- a resolution which recognized that the current lack of understanding seriously hinders the proper recognition of patients' inability to work.

3) Third, the Health Commission of the Spanish Congress of Deputies approved a resolution in September 2020 which urges INSS to establish clear guidelines on neuroimmune diseases, not as psychological disorders or with psychosomatic symptoms, but as real and objectifiable diseases. 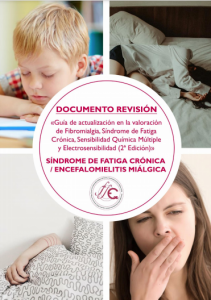 In response to inadequate government guidelines on ME/CFS, patient groups produced their own exhaustive analysis. Image by CONFESQ.
​
In an initial meeting with patients, INSS had asked the patient groups to argue and substantiate point-by-point the aspects in disagreement from the 2019 guidelines.

So the coalition of patient groups, along with Dr. Joaquím Fernández Solà and other informed doctors, put together their own thorough and exhaustive scientific analyses, including one on ME/CFS, one on fibromyalgia, and one on the gender bias implicit in the INSS guidelines.

What do you do when the government refuses to recognize your existence as a seriously disabled human being? Take them to court?


"It is a harsh reality that we are living: patients are forced to go to court to have their permanent work disability recognized outside the administrative process, with serious consequences for their health and their finances." ​
- María López Matallana, vice-president of CONFESQ​
Recent news reports describe how some Spanish patients have successfully been granted full disability pensions by the courts, including a professor from Zamora, a shopkeeper, teacher, and nursing assistant in Andalusia, a business assistant, domestic employee, and administrative assistant in Catalonia, and a nursing assistant in Asturias.

But these recent news reports may not signal a new trend.

"This has been happening for at least two decades, [but] these days a better knowledge of the diseases, more accurate tests of dysfunction, and [a specialization by some lawyers] is allowing some of the cases that are winning in court to be known" advises María López Matallana, vice-president of CONFESQ.

Legal experts seem to agree. "These are individual cases, like many others that are not published, but which coexist in time with many others whose disability is not recognized. The judicial struggle is individual and does not involve previous cases," clarifies Ángel García of the legal advocacy organization Fibromialgia Jurídica. 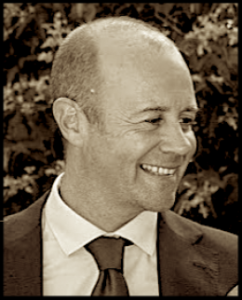 "It is true that there has been a significant increase in the number of favorable rulings but, if we establish an overall assessment between those that are upheld and those that are rejected, there continues to be a greater number of the latter."

Patient advocates are left in a quandary. Is the current situation simply the case of a stingy government bureaucracy? Is the solution to be found through the courts? Or is there a more fundamental problem at play?

This week brought surprising news to a weary community of patients. CONFESQ announced that it had finally received confirmation from the director general of INSS that the 2019 work disability guide had been definitively withdrawn.

"We are thrilled, as we suppose the whole community will be, and although much work remains to be done, and this withdrawal will probably not mean that the disability assessments will be as we would like them to be, at least this tremendously biased and harmful guide for patients is no longer accessible and cannot be used as a reference in medical reports, nor in the courts."

Eric Pyrrhus is a scientist with an interest in flaviviruses, coronaviruses, and imaging technology. With undergraduate training at Columbia University and the University of Pennsylvania, and graduate training at U.C. Berkeley and UCSF Medical School, he has studied biomedical sciences, bioinformatics, biomedical imaging, biosensors, computer science, artificial intelligence, and business administration.
Last edited: Jun 19, 2021

What a great article. It is always heartening to hear of victories by pwME in their struggle against injustice and discrimination. Please keep us posted on how the situation develops in Spain.
Yes, I read that article and I'm glad that things are beginning to change in Spain. Good news for the people involved, the Dr. and the lawyers. Yours, Lenora.
This is not what has happened, and most doctors involved should be denounced, not promoted.
Unfortunately Owl42, it takes a very long time for things to change.

I was one of the early patients and I can assure you that even now, more than 30++ (forget how long) years later, we're still met with resistance. But it's a beginning and I sincerely hope that younger people will have the benefit of my early experience. Not just for us, but for plenty of other illnesses also. It was pretty bad at the time. Yours, Lenora.
You must log in or register to reply here.
Share: Facebook Twitter Reddit Pinterest Tumblr WhatsApp Email Link