Illustrator Interrupted: I caught a virus and never recovered.

Illustrator Interrupted said:
It has been almost eight years since I caught a virus and never recovered, and I completely empathise with this growing group of COVID-19 “Long Haulers”.
[...]
Throughout history, women have not been believed to be reliable witnesses of their own bodies. This still happens today each time a doctor minimises or psychologises a woman’s health by not believing her lived experience.
[...]
Currently, men get twice as much funding for diseases that mostly affect men.
[...]
The wrongful redefining Myalgic Encephalomyelitis as a “Fatigue Syndrome” was a deliberate intention to trivialise and dilute diagnostic criteria to focus solely on the vague and unmeasurable symptom “fatigue”.
[...]
Contributing to the evaporation of ME as a distinct disease, was the malignant movement by a group of influential professors in the UK. Principally among them are Professor Michael Sharpe and Sir Simon Wessely, both psychiatrists with links to the global insurance industry and close ties with UK’s Department for Work and Pensions (DWP).
[...]
What other reason would Wessely change an internationally classified neurological disease, to a mental health illness, if it weren’t to further his own, and the insurance industry’s agenda?
[...]
The way they trumpet their pseudoscience nonsense every time biomedical research studies for ME reach mainstream headlines, is a pathetic and desperate attempt to cling onto their last strand of credibility.
[...]
Why are psychiatrists still given a voice when Long COVID and ME/CFS are physical conditions?
[...]
Government health departments “worldwide” need to take responsibility for this massive injustice that has left ME patients without treatments, thus afflicting them with the poorest quality of life than most major diseases (some of which aren’t nearly as common). There are millions of us suffering year after year, decade after decade with no end in sight. And it looks as though ten million more are about to join us if this neglect continues.
[...]
If a doctor tells you that your physically debilitating symptoms are due to being overly anxious about your health, please seek another opinion. You know your body and mental state better than they do.
Click to expand...

Excerpt:
If a doctor tells you that your physically debilitating symptoms are due to being overly anxious about your health, please seek another opinion. You know your body and mental state better than they do.
Click to expand...
amen
B

The comic at the top is brilliant. 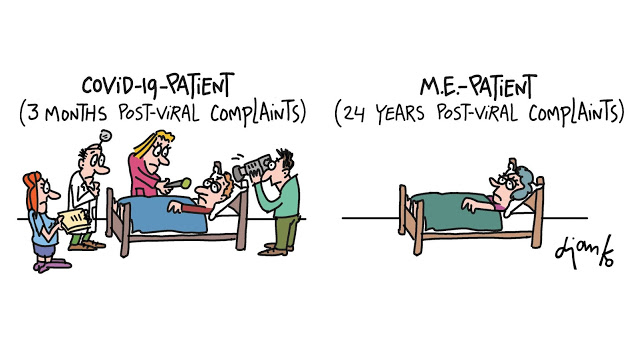 This is really excellent. It brings together important parts of the history and story arc of the disease and brings it to right now current. It does a great job explaining the important influences of how things were what they were and came to be. I think this is a great thing to show other people to give them the depth of what has occurred. I hope more people see it. This was legitimizing for me, as I am still learning the history.
L

Excerpt:
Click to expand...
I'll just add a small example of the use of a psychiatrist. As most of you know, I'm female and aged 74. Last year I was hospitalized and was unconscious for two whole days. I almost died at this time, and was diagnosed with autoimmune encephalitis. Now people with this condition do have the brain involved and it can cause serious impairment.

I don't know why there wasn't a psychiatrist on staff, but I talked to one in CA each day. After I read about the symptoms, and the book 'Brain on Fire' I had a better understanding of why he was involved. As a matter of fact, I wasn't going to be discharged until I had his OK. Again, I was fortunate.

At the same time, I also had two epileptic attacks while in the ER, both witnessed by the doctors in attendance. I'll be on Keppra for the remainder of my life....and I'm glad it's available. These illnesses can cause serious brain dysfunction and the damage is lasting. My mind is not that of the person who entered the hospital, although I've worked very hard to have it return to that level.

Autoimmune Encephalitis is a fairly new diagnosis and not much is known about it. In my case I was told that it was an imbalance of electrtltyes...and in about a week I went from having trouble seeing out of one eye, that spread to the other, a headache, extreme weakness on my l. side and finally not being able to walk at all. I wasn't responding to my husband and an ambulance was called. So, yes, I did suffer brain damage and it was up to the psychiatrist to determine how bad it was. Trust me, there were many doctors involved, but all diagnoses were different. But not the psychiatrist himself, he was certain of what was required of me.

I've since heard from people who have suffered from the same illness. I don't think electrolyte imbalance is the sole answer for this illness, but what is? Another question, but one I'll have to live with not knowing. So there is a place for such diagnosis from these specialists. Just for your awareness. Yours, Lenora.
You must log in or register to reply here.
Share: Facebook Twitter Reddit Pinterest Tumblr WhatsApp Email Link