(Gratefully shared with permission from Invest in ME Research.) 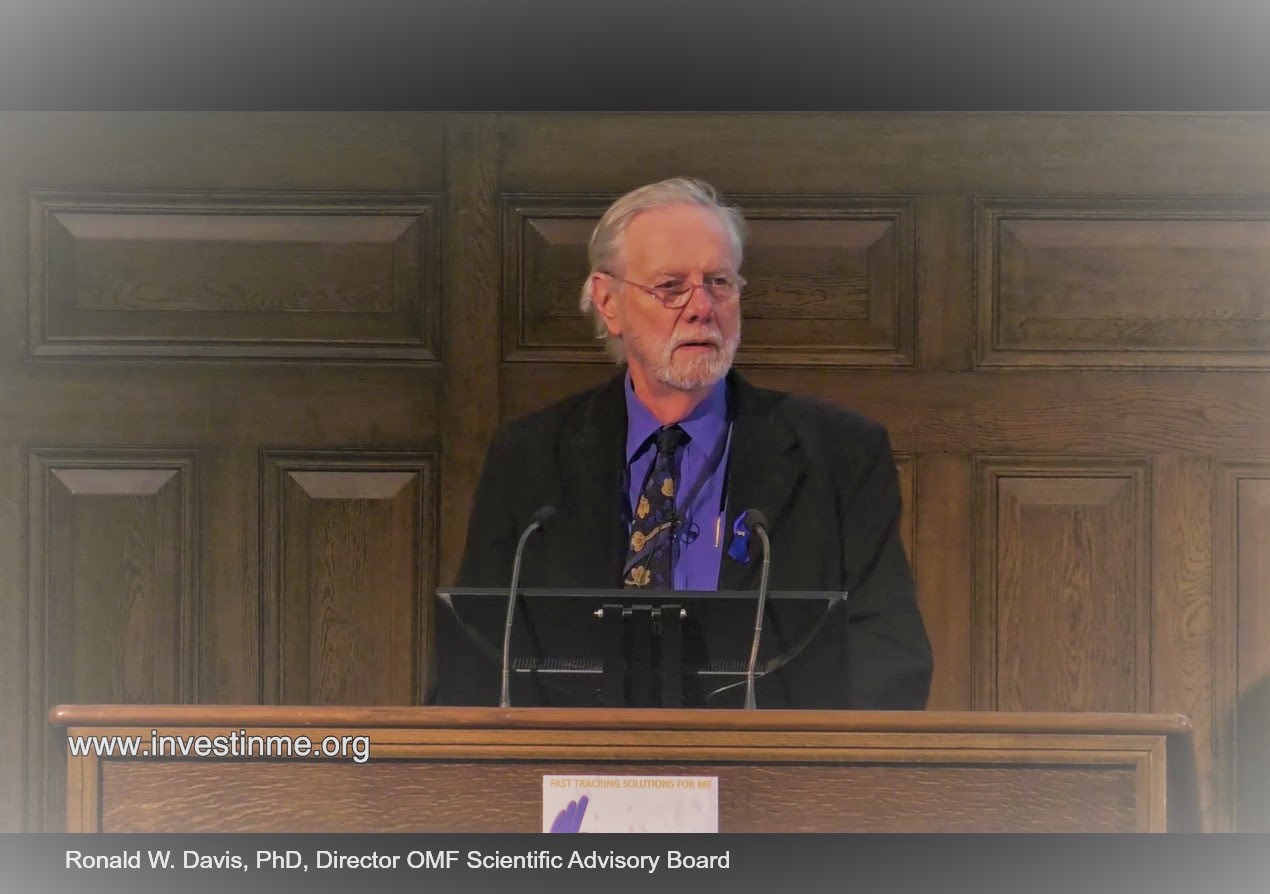 The full IIMEC13 conference DVD can be ordered here.

To hear a research update and meet our amazing scientists in person, join us for the Community Symposium on the Molecular Basis of ME/CFS at Stanford University sponsored by OMF on Saturday, September 29. In-person registration has been extended until Tuesday, September 18. If you are able to join us in person, please register here.

To watch the Community Symposium on the free Livestream. Register here. 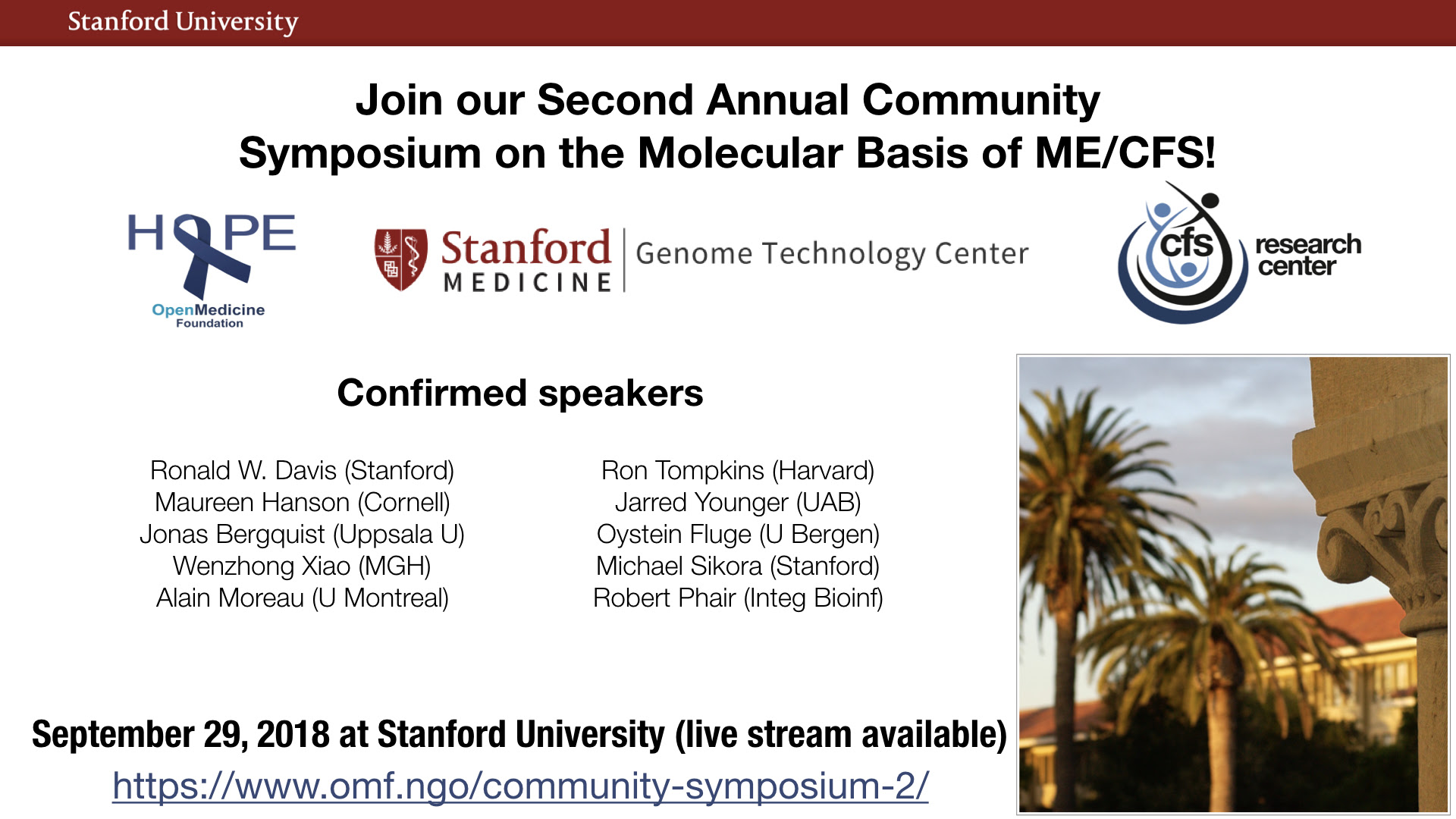 It's time for people to listen to those suffering ME/CFS.

Dr. Ron Davis said:
So, most people think that how you do research is you create a hypothesis and then you devise a test to rule out, to try to rule out that hypothesis.

That's actually wrong and uhh, Vicki's not here anymore so I can say it, NIH has got it wrong, and........ that is not the scientific method, but that's what NIH requires if you write a proposal and that is incorrect.

What happens when you start a new disease when you know almost nothing about at the molecular level? You have to make observations, and then you can generate hypotheses.
Click to expand...

Looking forward to hearing what's been happening since June in just a few weeks...

Wow! Thank you for posting this. This is the first time I have seen this. I had only heard about it second hand. There is so much more in this than I expected. I would so love to post a link in doctors.org.uk but better not. The usual psycho-cultists would just practice and prepare their silky whispers to the media about how not to give this too much attention. Let them get hit with it by surprise I think. Personally, I think that RD is onto more than one thing here. I do not mean the many perspectives and potential suspects in our own suffering but the "new frontiers" of; observation then hypothesis (actually the old fashioned way of doing science). The parallels with other diseases being found might hint that, once he has solved the ME problem, he and his teams may find that they are more than half way down the track to making significant breakthroughs into discovering the physiopathological aetiology of long puzzled over and poorly dealt with significant illnesses like MS, Type 2 Diabetes, Alzheimer's, Parkinson's, Cancer, coronary and cerebral vascular disease and cancer. The irony that the generosity, patience and dedication of sufferers and their supporters of a ridiculed and dismissed illness, which has struggled to gain serious recognition, let alone funding research, might ultimately provide such hope and help to so many others suffering from serious illnesses. Illnesses into which so much money and so much supposed talent have poured into a research funding black hole.

Would I be treading on any toes or disrupting any IIME strategy if I tried to prime and interest any sympathetic doctors and health journalists into this and the upcoming IIME conference/update later this month?
W

Dr Who said:
Would I be treading on any toes or disrupting any IIME strategy if I tried to prime and interest any sympathetic doctors and health journalists into this and the upcoming IIME conference/update later this month?
Click to expand...
@Dr Who OMF are the ones that posted this video. If you contact them they should be able to help guide you. Here is their contact info for communications. The omf.ngo website also lists a phone number

A good - and very interesting - talk. Even promising.

Wouldn´t it be a good idea for countries to donate some comparable little money?

@Dr Who, to me it sounds more like a good idea.
R

Great presentation. Made me hopeful even more than usual.

Well, have a response from marilyn@omf. It is OK for me to link the youtube video on doctors.org from the OMF perspective. I think I should ask IIME also though. Who was it that posted it on YouTube originally? What do you guys think?
W

If you post a link to the video which is also on the OMF site then there should be no issue as the OMF has permission to post it there on the internet. Plus it directs folks to OMF where they can read more about the research. Here is the link.
https://www.omf.ngo/2018/09/17/ron-davis-iimec13/
W

Finally watched this. It was very good. I particularly enjoyed a few different aspects:

1. The sheer number of hypotheses. I'm wary of anyone who reckons they have figured out the one true answer, especially when that is based mostly on theory. Naviaux thinks he knows what it is, and so does Phair. But Davis is running both of them in parallel, and doing many many more things besides. The more avenues you explore the better your odds.

2. The trypanosome hypothesis. Why can't there be some weird parasite nobody is looking for!? It's not impossible. So many diseases *are* caused by infections, so an unexpected foreign agent is still worth checking out. I got sick in a first world city, but maybe I'd been infected with the parasite long before and the (viral/bacterial) infection I had allowed the parasite to take over?? Or maybe some sort of liver damage at about that time ( I was at an enthusiastic drinking age) meant my liver couldn't handle the parasites any more. @mariovitali

3. Collecting data to make more hypotheses. This crosses over with #1. They're not betting they already have the answer in the bag.

4. I'm elevated by Ron's enthusiasm for the metabolic trap hypothesis, and his confidence it will be easy to solve if it is true. (I think refeeding syndrome is an example of a metabolic trap. Refeeding syndrome is solved by adding and subtracting certain nutrients in a certain order (low calorie, high electrolytes ,basically). From what Ron is saying, this won't be solved with a drug so I guess it will be solved by adding and subtracting nutrients in order.

If I had to guess what the intervention might be, based on a couple of things I've seen online, I'd guess it will involve Niacin. You can see the Niacin clues here: 1, 2. Niacin is also known as Vitamin b3 and it is central to metabolism.

Phair's diagram shows dietary niacin leading to changes in nicotinamide. Nicotinamide is interesting because in Naviaux's findings it was the lowest metabolite compared with healthy controls (in female patients albeit with crazy high variance). In males it was one of the highest, again with silly amounts of variance, so the absolute differences might not mean much).

The ratio of nano-needle talk to nano-needle data still seems awfully high. Next time i see that impedance chart, I don't want it to be from one patient - I want it to be n=1000 !! I remain dubious about something which at last check had a small convenience sample of under 20 patients.

The final word on Phair's metabolic trap hypothesis seems to now be 'within a few months or a year' rather than 'by the end of summer'.