Elevations of Ventricular Lactate Levels Occur in Both Chronic Fatigue Syndrome and Fibromyalgia.

Purpose:
The purpose of this study was to further add to the body of evidence favoring different disease processes in CFS and FM by comparing ventricular cerebrospinal fluid lactate levels among patients with CFS alone, FM alone, overlapping CFS and FM symptoms, and healthy control subjects.

Methods:
Ventricular lactate was assessed in vivo with proton magnetic resonance spectroscopic imaging (1H MRSI) with the results normed across the 2 studies in which the data were collected.

Results:
Mean CSF lactate levels in CFS, FM and CFS+FM did not differ among the three groups, but were all significantly higher than the mean values for control subjects.

Conclusion:
While patients with CFS, FM and comorbid CFS and FM can be differentiated from healthy subjects based on measures of CFS lactate, this neuroimaging outcome measure is not a viable biomarker for differentiating CFS from FM or from patients in whom symptoms of the two disorders overlap.

it confirms previous studies by this team and others
A

It comes down to the age old problem. How to define the difference between CFS and FM. In the UK the same patient can get two or more different diagnosis from diferent Docs. The chance of a British GP doing any tests to tell CFS from FM are probably zero.

More detail from the paper:

... the existence of elevations in ventricular lactate in both illnesses suggests a problem in brain-related mitochondrial metabolism. Accumulations of ventricular lactate can be assumed to occur when aerobic metabolism is impaired. Pyruvate generated by anaerobic metabolism of glucose is not aerobically metabolized and is converted to lactate by lactate dehydrogenase [14]. Since elevations in lactate may reflect a down-stream effect of areas of anaerobic metabolism or a result of central neuro-inflammation, finding elevations do not necessarily mean that the mechanism for the lactate elevations is the same for CFS [9], where oxidative stress has been invoked, as for FM. Further research will be needed to answer this question.

Regardless, finding similar levels of ventricular lactate for CFS, CFS plus FM and FM is additional support for the single syndrome hypothesis. Although further research is needed to determine if CFS and FM are different illnesses or variants of the same patho- physiological process, ventricular lactate could certainly serve as a biological marker of underlying brain dysfunction for some patients with either or both diagnoses.

In summary, this is the first report, to our knowledge, that included, using standardized scores, three patient groups – CFS, FM and CFS plus FM – and demonstrated that each of the three groups separated from healthy volunteers but did not separate from each other. Moreover, this is the first biomarker we are aware of that identifies a biological comorbidity shared by both CFS and FM. Limitations include that all subjects in the analysis were females, but male values did not differ from females. Moreover, in order to obtain the current results, two cohorts were combined but standardized scores, which normalize both mean and variance, were used to combine the data [16]. Further studies are required to elucidate the pathophysiology of the FM-CFS spectrum. 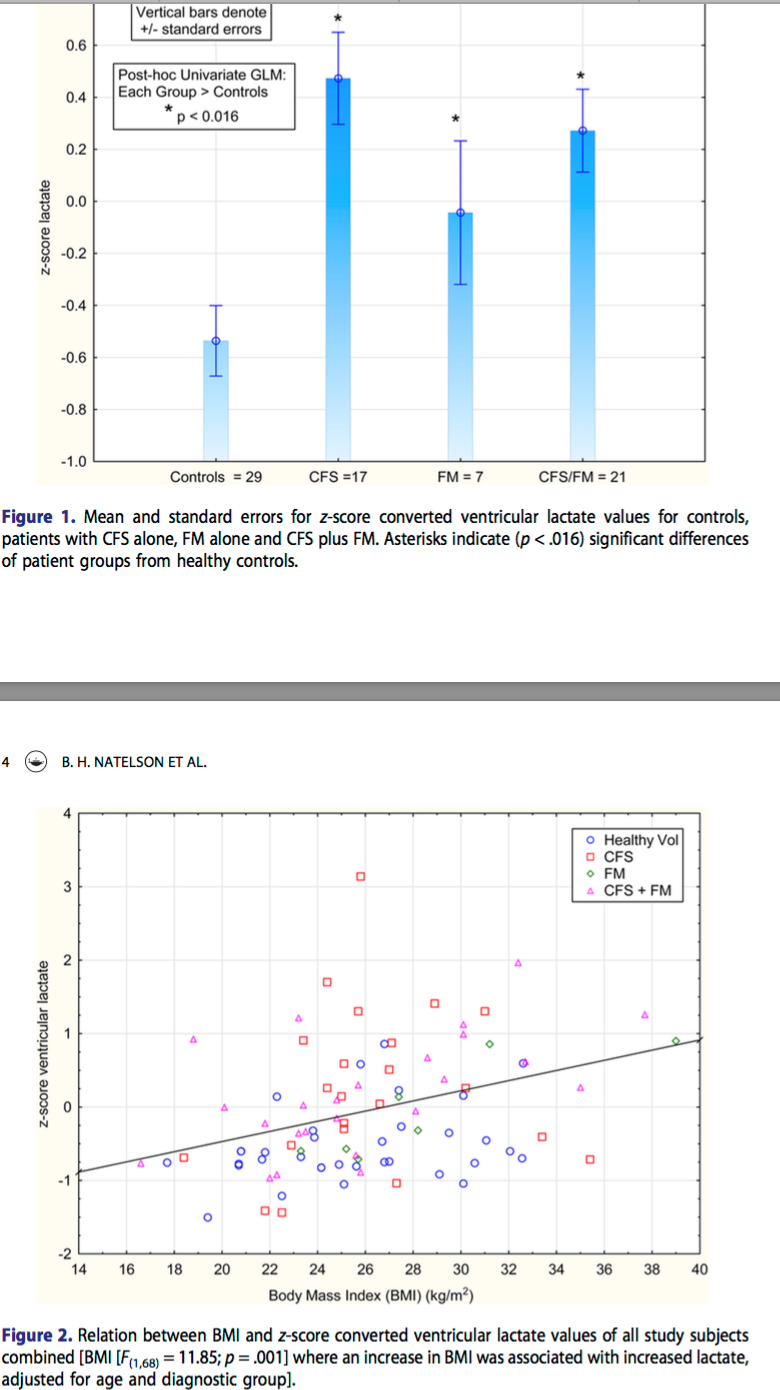 Interesting regarding the scatter chart, that the increased BMI was associated with increased lactate. I wonder why? Increased inflammation with the increase in BMI?

I have had both FM and CFS since I started getting sick, years ago. In my mind they are most definitely different manifestations of the same illness, with the same root cause.

This is very interesting research. In my limited experience of both CFS and FM the main difference seems to be that pain is more of an issue in FM. Other symptoms seem pretty much the same.

My brain is crashing today (strangely I was a bit better a few days ago when a cold-virus was active)...anyway I wish to ask some questions about this thread.

I've read several studies stating elevated lactates in the ventricular in CFS/ME and at less one previous study stating the same phenomenon in FM, so the interest of this new one is double.

-First it confirms previous studies
-Second it shows no difference between FM and CFS/ME (this is not the first time these two diseases cannot be differenciated in studies, but I can't remember which studies it was, so apologize)

in AD a study has done a parallele between glucose hypometabolism and elevated lactates in the cerebrospinal fluid.

So it would be interesting to see if there is correlation between the FDG PET done in CFS patients and the elevated lactates in ventricular, specially if the affected areas are drained in the ventricular.

I have also read that intracranial hypertension can have some impact on lactates in ventricular so it would be interesting to control this possibility as well.

i also wonder if glucose hypometabolism related to mitochondrial dysfunction could be caused by hypoperfusion of some brain area, as this possibility is often discussed in Alzheimer's studies...

Not sure if science is yet able to answer to these questions, but I am interested in points of view!
K

This test can correctly identify an fm or cfs patient with what % accuracy?

knackers323 said:
This test can correctly identify an fm or cfs patient with what % accuracy?
Click to expand...
Its not diagnostic, its about pathology. Many problems cause elevated lactate. What we lose here is the capacity to disambiguate between FM and CFS using brain lactate.

Don't let similar symptoms blind anyone. There are indeed a few markers that differentiate ME, CFS and FM. Substance P comes to mind, as do the immunological changes in FM, the details of which I forget. Many of us do have both ME and FM however, and this indicates a probable underlying pathology in causation. It is not clear that is brain lactate. That might be downstream of the problem. ME also has PEM which can be verified with the repeat CPET test. There is a lot of research right now to find better markers.

andyguitar said:
This is very interesting research. In my limited experience of both CFS and FM the main difference seems to be that pain is more of an issue in FM. Other symptoms seem pretty much the same.
Click to expand...
Pain is the major issue in fibromyalgia, whereas fatigue is the major issue in ME/CFS. Quite a few ME/CFS patients are bedbound just due to the severity of the fatigue and PEM, but I am not sure if you would find many fibromyalgia patients bedbound.

Another difference is the viruses associated with each disease. ME/CFS has a strong link to enteroviruses, but you don't find such a connection in fibromyalgia to my knowledge. I am not sure though if that may just be down to insufficient research on fibromyalgia's viral connections.

Results:
Mean CSF lactate levels in CFS, FM and CFS+FM did not differ among the three groups, but were all significantly higher than the mean values for control subjects.
Click to expand...
I had a look in another place [Health Rising - Cort Johnson] and there's a write upon this.

Looks like it may be consistent with the Sea Horse metabolism studies i.e. change in cellular energy production to anaerobic (hence high lactate).

Also it seems to tie in with the Naviaux/Fluge and Mella etc. proposal that something in the blood (or lack of) is affecting the cellular metabolism. Could that something be lack of glutathione; the authors demonstrated low levels in the brain? Poor antioxidant status can affect blood vessel functioning ---- (isoprostanes).

On the face of it Ron Davis could check out the glutathione/isoprostanes using the nano-needle.

There's a lot of stuff in this e.g. fibro and ME/CFS may be slightly different neuro-inflammatory conditions. They're looking for an NIH grant to do some PET work; remember the Japanese PET study on ME/CFS (Nakatomi - ‎2014).

I think that we're struggling to find objective tests for ME/CFS; this seems to leave it open for some to label ME/CFS as a psychological condition. An MRI scan which detects high levels of lactate, and potentially a PET scan identifying neuro-inflammation, in CSF seems pretty good to me. Some of the other tools to investigate the causes of/treatments for high lactate may be there (nano-needle). As usual we need funding for research.

At least the NIH funded some of this research. The European Commission in it's response to question E-006901/2017 stated that "To date, no specific projects on ME/CFS have been supported" i.e. no funding for ME/CFS. Something readers may wish to challenge.

I haven't read most of the above comments, but I'm intrigued by Alex's comment re "Substance P"; what is Substance P?
F

andyguitar said:
It comes down to the age old problem. How to define the difference between CFS and FM. In the UK the same patient can get two or more different diagnosis from diferent Docs. The chance of a British GP doing any tests to tell CFS from FM are probably zero.
Click to expand...
I'm in the UK to. NICE have a suggestion box, how about suggesting an MRI to look at lactate levels in CSF? At least people with ME/CFS / Fibro would have definitive evidence of an underlying biochemical problem (they don't currently). What we need, i.e. in addition to a scan showing high levels of lactate, is research to identify the cause(s) and potential treatments e.g. re low levels of antioxidants such as glutathione.

FMMM1 said:
what is Substance P?
Click to expand...
https://en.wikipedia.org/wiki/Substance_P

https://www.ncbi.nlm.nih.gov/pubmed/15515412 for example. Substance P was considered an important research lead at one time, but the research languished, perhaps because they could not get sufficiently robust results.
F

https://www.ncbi.nlm.nih.gov/pubmed/15515412 for example. Substance P was considered an important research lead at one time, but the research languished, perhaps because they could not get sufficiently robust results.
Click to expand...
Thanks Alex, I'd never heard of this.
F

On the NICE National Institute for Health and Care Excellence website it says "Anyone can ask us to consider a device, diagnostic or digital technology for NICE guidance or NICE advice". Here's the email address medtech@nice.org.uk. So I asked them to consider this for ME/CFS and Fibro.

With a slogan like that what's not to like. Go on suggest this or something else.
A

Well done @FMMM1 for posting that link. Yes I would encourage anyone who is able to make representations to NICE. I have, but by a slightly indirect route. The Substance P research which @alex3619 refers to is worth having a look at and its a shame that there is not more interest in it these days.
You must log in or register to reply here.
Share: Facebook Twitter Reddit Pinterest Tumblr WhatsApp Email Link