Crawley: How to deal with anti-science BRS2017

Countrygirl said:
I also recall reading in the study protocol that a parent of a child who fails to improve will be liable to investigation, a possibility of which the parents should be aware if they participate, but they are not, it appears. I have tried to find the document on line but it seems to have disappeared.
Click to expand...
This seems very unlikely. While I don't doubt Crawley would engage in such behavior, she'd hardly advertise it anywhere. And it would have generated a great deal of conversation here.
S

https://twitter.com/i/web/status/796399437589385216
Remembered this from an old thread - http://forums.phoenixrising.me/inde...e-over-chronic-fatigue-syndrome.47743/page-12
Don't know if it helps if the original source has been disappeared.
ETA: Looking at it again, I think the really awful bit about mothers is from the Dutch FITNET?
Last edited: Jun 7, 2017

Q: At the moment she doesn’t go to school, does this matter?

A: We don’t think you should be part of the trial if you are severely affected.
Click to expand...
When I was of school age, I didn't know any children with CFS who were able to attend school in person. All utilised remote learning programmes.

If these children are still able to attend school, it suggests they're a skewed (and mildly affected) subset.
R


Interesting, let's hope she doesn't generalize the results to the severely affected.
Click to expand...
lol.
The entire idea of Crawley et al's adolescent CFS is driven from surveys of patient data that basically only looked at fatigue for a modest period, and did not at all require other symptoms, specifically PEM.

She is explicitly and intentionally overgeneralising from results on subgroups to the general patient population when she makes claims around GETs harm.

"Will I experience any side effects from taking part in this study?
We have used Activity Management and face-to face CBT in our service and are not aware of any side effects. A study of on-line CBT treatment for children with CFS/ME has also shown that there were no side effects."

Presumably this is also referencing the Dutch FITNET (shown to be in-effective).

But then I guess if they do feel any ill-effects they are instructed to go to their GP; so it couldn't possibly have anything to do with the 'treatment'............

there is a complete indoctrination of the patient (child and parent) from day 1 ie just reading the information leaflet, that I am sure continues through treatment and beyond - one can only wonder the impact on any research outputs
B

Valentijn said:
This seems very unlikely. While I don't doubt Crawley would engage in such behavior, she'd hardly advertise it anywhere. And it would have generated a great deal of conversation here.
Click to expand...
All I've really been able to find is a protocol saying that parents of children who drop out would be interviewed as part of the trial evaluation:-

We will undertake in-depth interviews with parents/carers and their children to understand their views and experiences of trial processes. This will include: provision and acceptability of patient information and reasons for accepting or declining participation. We are particularly interested in understanding barriers to participation and will interview (subject to informed consent) those who choose not to participate in the trial, who drop out of trial follow up or who do not accept treatment allocation at randomisation.
Click to expand...
B

Just seen this post, which seems to have some relevance:-

"Chronic fatigue syndrome" Wikipedia - can we change this

SamanthaJ said:
https://twitter.com/i/web/status/796399437589385216
Remembered this from an old thread - http://forums.phoenixrising.me/inde...e-over-chronic-fatigue-syndrome.47743/page-12
Don't know if it helps if the original source has been disappeared.
ETA: Looking at it again, I think the really awful bit about mothers is from the Dutch FITNET?
Click to expand...
Thanks @SamanthaJ Yes, I remember the article you posted above but there was another paragraph that had the relevant part later in the document. It seems to have disappeared from the 'net. Frustrating! 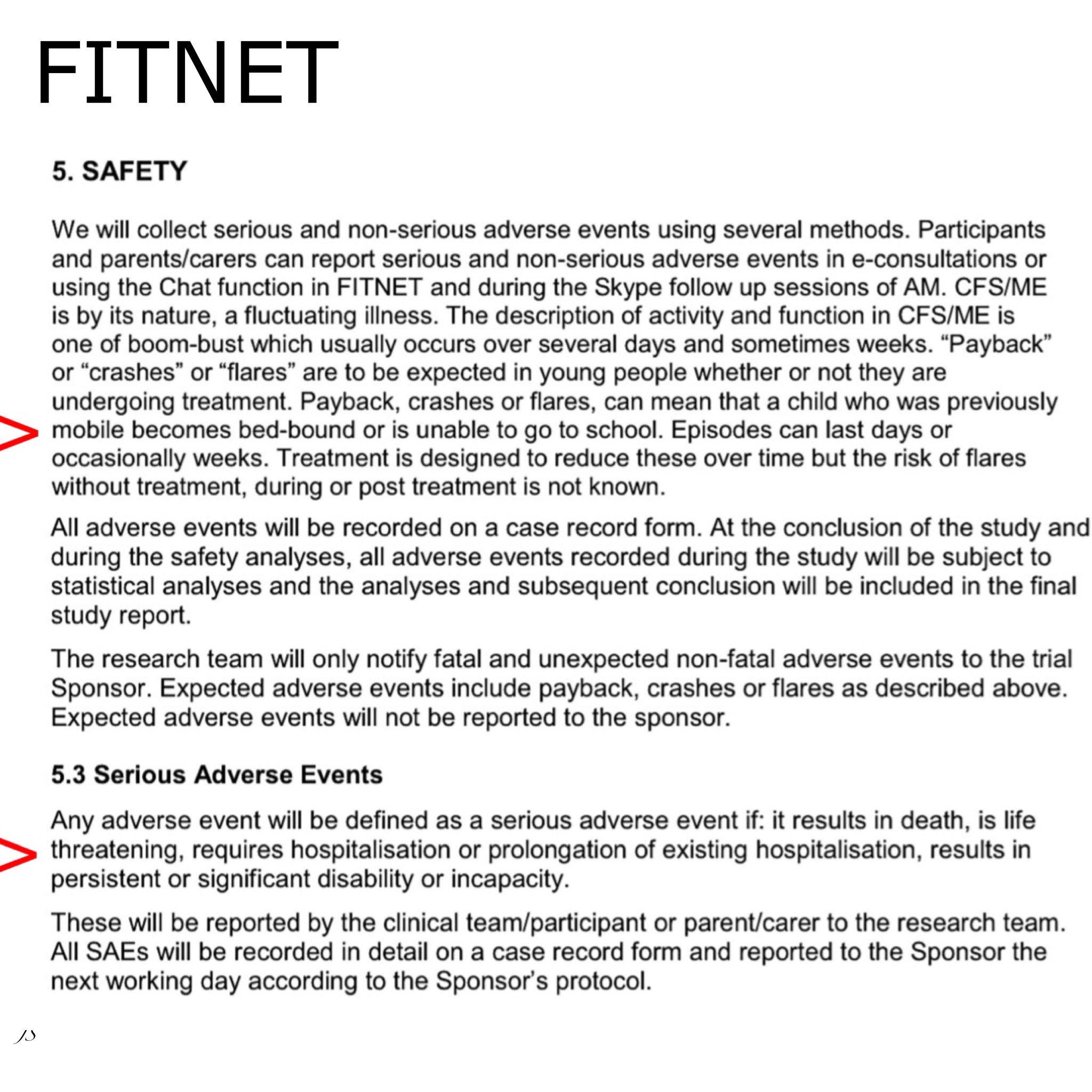 Ugh! It's all scary and frightening, also somewhat perplexing. She's just chosen to focus on those who are (or could be) attending school - defines severely affected as only leaving house for medical appointments. I'm sure a lot of those would still come under a moderately affected definition (many of these will be receiving LA home tutors). Does she just want to focus on the more mildy affected (that's a long list of possible activities she's giving as examples of 'high energy' use!) - those that may possibly have a shorter illness duration anyway??

That's a very intimidating & loaded statement for young people 'cognitive behaviour strategies to change thought processes to allow you to reach a goal that you have set for yourself'. It's insulting and all tied up with false illness beliefs and 'fear of moving forward'.
Nothing about validating the illness & that actually you are just often too ill to make increases - the increases have also been bumped up to 10-20% a week. A week! Used to be 'just' 10%!! Will we actually here about how often increases have been made. How many were actually able to sustain that week on increase.

& parents 'beliefs' about the illness will be looked at separately. More worry = over protective parent impeding recovery vs more worry = your child is not improving or deteriorating.

What 'stage' of the illness will these young people be at & will that be recorded. For example, if 2 years into illness & already at school that may mean 'recovering' anyway.

Will we hear about those that left the program & their reasons. But again EC is likely to interpret that (privately if not publically) as they had barriers to recovery by not being able to engage with the program. I wonder if there is a record of those who have left her current service and their reasons anywhere.

I expect she'll find what she's looking for (or interpret it in the way that fits her theory) & the even greater concern is the further pressure that will put on families to engage in such programs. She can claim it was for all except severely affected but I would dispute that she's actually just focusing on mild not moderate M.E. You would need to be reasonably high functioning to be able to cope with school attendance plus 60 minute Skype calls plus working through 19 modules. Wow!

Also, just read she is interested to know about barriers to participation on the program but is that more to do with examining what's the issue with the person who is not engaging/has left rather than what the issues are with the actual program in the first place. Sadly, everything can be 'turned around'.
Last edited: Jun 8, 2017

ME/CFS is a serious physical disease, exacerbated by activity beyond the individuals boundaries and CBT/GET used to correct wrong illness beliefs and overcome fear of activity are totally inappropriate and potentially dangerous therefore there are surely no appropriately trained professionals because CBT/GET are totally inappropriate, end of story.
Click to expand...
In fact you could argue that these "trained professionals" are themselves subject to false illness beliefs.

Stop the harm. Start the research and treatment.

Barry53 said:
In fact you could argue that these "trained professionals" are themselves subject to false illness beliefs.
Click to expand...
It sounds like it would be a Monty Python skit 'cause its so absurd: the 'professionals' have a false illness belief, and they project onto ME patients, subjecting them to the exactly wrong 'treatment', making them even sicker.

It could be funny if it weren't true.
S

Help David Tuller. Even if there was a cure tomorrow this drivel needs to be shown up for what it is.

jaybird1 said:
There's another thread here about a webinar by Jessica Bavinton on the use of GET;
Click to expand...
I searched Bavinton and found several threads! Do you know about the stopGET campaign with ME Action Network UK? Would your story be suitable for here http://www.stopget.org/category/missingmoreget/

ScottTriGuy said:
it would be a Monty Python skit
Click to expand...
Unfortunately it feels more like a health focused version of 1984/The Trial style dystopia
B

ScottTriGuy said:
It sounds like it would be a Monty Python skit 'cause its so absurd: the 'professionals' have a false illness belief, and they project onto ME patients, subjecting them to the exactly wrong 'treatment', making them even sicker.

It could be funny if it weren't true.
Click to expand...
The Dead Parrot sketch seems to have a similar ring to it, insofar as refusal to accept biological symptoms:-