Just wanted to make people in the UK aware that there's a autoimmune panel that does 6 markers for about £159. Not cheap I know! But considering how hard this is to get on the NHS and that the full viral panel privately seems to cost £700 not inc consultation fees this seems like a bargain.

One positive test on its own doesn't mean you have auto immune encephalitis by the way, but testing 6 seperate biomarkers does rule out a variety of different auto immune diseases, all of which could easily have been missed with your GP's standard testing pack.

I'll be getting my results in about a month so I will post back then. 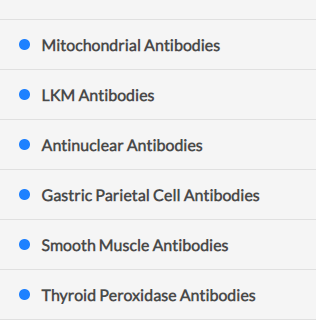 Medichecks have a network of clinics where you can get bloods drawn locally for £30. You select this option at checkout and then you can select a local clinic to get to.

I am not affiliated with medichecks in any way whatsoever, posting this purely because so many seem to have been mis diagnosed with ME when the root cause was actually auto immune encephalitis.
V

What antibodies can your GP test for?

To my knowledge they can't. But I expect the correct specialist in the NHS probably could. But getting to them is often tricky and it can take 12 months to get tested and get an answer.

Whereas this test if it can be afforded has about a 1 week turnaround and includes a doctor's feedback with the test results.

Thats fairly tempting to try, its not that expensive. I had some stuff done recently and it seemed more than what they would usually bother with, but I can't access the information, just tried again thinking maybe they would have fixed it by now. I might have to call and ask them to mail me the test results. I don't believe I have AE because I have never had psychosis, but I could be wrong of course.

Let me know if you had it. Maybe call your GP?

I've got a physical copy of all my stuff. Not once have they ever ran a panel for auto immunity. Which considering how many here have it seems ridicolous.

Glad I found this test to be honest. As the ANA on its own doesn't mean much.

Yes I know what you mean more severe neurological symptoms do seem to be a thing.

Wouldn’t autoimmune encephalitis show up in a MRI scan?

@Hoosierfans @lenora @crypt0cu1t Do you know if AE shows up on a standard mri scan?

godlovesatrier said:
@Hoosierfans @lenora @crypt0cu1t Do you know if AE shows up on a standard mri scan?

Thanks,
Click to expand...
No, around 50% of AE patients have a normal MRI. Mine was only detected on a PET Scan.

crypt0cu1t said:
No, around 50% of AE patients have a normal MRI. Mine was only detected on a PET Scan.
Click to expand...
I try to get a PET since years …
L

Hello Godlovesatrier & all others.....I don't know if an MRI scan would be 100% accurate in showing AE, although it would show encephalitis itself (which could lead to AE).

This is an illness that's receiving a lot of attention of late, simply b/c so little was known about it. I do know the Mayo Panel had a pretty fast turnaround here in the U.S., but would have to dig my records out to check on MRI's, when they were done, CAT scans, the usual. I'll do that, but doubt that it will be today as I'm recovering from something else so am presently a big slow on the draw. I'll get back to you when I can.

Do have some pedialyte on hand and use it if you feel you need it....at least the electrolytes will be balanced .Liquds should be watched, especially in the summer months. Not too much black tea and caffeinated coffee, salt intake should be limited but not stopped (you need iodine) and, in my case, I could actually feel my eyes going weeks before the actual event (assuming there was just one).

One morning my eyesight in both eyes was rather severely impacted, and a leg that I had been walking on the day before, wouldnt' support my weight the next. My husband noticed that I was responding well to questions and then called the ambulance. I then became unconscious in the ambulance, but I had also suffered a mild heart attack and later on two epeleptic fits in the ER, witnessed by doctors. The latter was confirm by ECG. I don't believe these were my first epileptic attacks, although I only have a possible memory of one....but certain strange behavior was explained by the epilepsy, including a broken wrist.

The AE did require a psychiatric evaluation, and check ins over a period of days....for a very good reason. Part of the brain can be affected and they have to narrow down which part and whether or not your memory is capable of responding to improvement. I can honestly say that no, my memory is not what it was before the AE attack, but I'm working on it and am making progress.

I'll try to find the MRI and other forms, reports, etc., and see exactly when the diagnosis was made. This is more common in older people, but can of course occur in those younger. I think even all the specialists themselves were somewhat confused by so many ongoing conditions....and I hadn't even mentioned my CFS/ME.

I now have 5 cardiac stents and a femoral one (leading to the brain). I was conscious throughout and that was just fine with me. I don't do well under full anesthetic, or even a shorter acting one. Did the arterial stent make a difference....I can't answer that, b/c I don't know how I would have been without it. I'll try to find that info asap. Take one thing at a time....it helps to not be overwhelmed. Yours, Lenora.

Martin aka paused||M.E. said:
I try to get a PET since years …
Click to expand...
I had to pay for mine out of pocket. Was definitely worth it and helped me get diagnosed.

crypt0cu1t said:
I had to pay for mine out of pocket. Was definitely worth it and helped me get diagnosed.
Click to expand...
Yes, I totally forgot about having a PET scan. The newest machines are the most likely to pick up on anomalies. One of the reasons we go to the hospital we do now. I'll check and see if I have the PET scan, also.

@cry0ocu1t.....have you had any luck with getting insurance for your treatment yet? Yours, Lenora. .
Last edited by a moderator: Jun 9, 2021

godlovesatrier said:
Thanks @crypt0cu1t . Hoping my auto antibody tests come back negative.
Click to expand...
I was hoping mine came back positive, to me, that means it's something treatable!

As I'm in the UK it wouldn't really be treatable. For example my girlfriends brother has a ruptured disk and needs emergency scan and treatment asap. They can't even get him into the hospital here and he's an emergency case. He's lost feeling in his foot and part of his leg. The doctor is extremely worried because he knows this is a really really bad fu***** sign.

When patients with treatable conditions come into the NHS who need immediate emergency care and they can't be seen and sorted out I'm afraid the rest of us have got no chance.

I am not personally convinced the NHS here in England will ever recover from covid partly because of systemic funding cuts.
L

Hello @ godlovesatrier.....I'm sorry to hear that ER cases aren't being handled immediately. Can the girlfriend's brother see his own GP and have the necessary tests. That is being done more and more here....as far as surgery goes, I guess he would then be referred back to the NIH, or I would hope so.

It seems the NIH is having a problem rehiring doctors after the split from the European Union, or am I under the wrong impression? I know that COVID has definitely changed our ER treatment here....I've been there a few times and have always had good success, probably b/c there was something seriously wrong and they happened to have a bed. I was just fortunate.

May I ask which city this took place in? I hope he'll soon get some necessary help. Yours, Lenora.
P

It's great you found something you can do!

godlovesatrier said:
One positive test on its own doesn't mean you have auto immune encephalitis by the way, but testing 6 seperate biomarkers does rule out a variety of different auto immune diseases
Click to expand...
These don't test for autoimmune encephalitis by the way. They don't rule out a variety of different autoimmune diseases unfortunately. But it's somerhing. It tells you about those specific antibodies only, except for ana which is something that could indicate whether you do or don't have a number of conditions but ana isn't always present with the conditions it's associated with so it doesn't rule out a bunch of things even though many doctors still practice like it does. These few may be a little more common than others but I question where they're getting that from. Parietal and mitochondrial I question that those are common. Tpo is common. Ana is common.

Yep that's true. But so far the autoimmune Encephalitis members seem to suffer from severe neurological symptoms or complications. Which it seems not everyone else does.

At at any rate I think it's good just to be able to get a test and some idea if whether things are present or not. As the panel in the UK is extremely expensive (the 20+ biomarker one).

Thanks for the explanation of how it works tho. Wasn't aware of all that

@lenora this was Newcastle - North East England. He's still not been seen today, I pray he gets seen tomorrow. The doctor is literally saying to him "I am extremely worried about you but I just cannot get a slot for your scan." The doctors must feel like crap, imagine not even being able to do something as basic as a spinal scan.
L

godlovesatrier said:
@lenora this was Newcastle - North East England. He's still not been seen today, I pray he gets seen tomorrow. The doctor is literally saying to him "I am extremely worried about you but I just cannot get a slot for your scan." The doctors must feel like crap, imagine not even being able to do something as basic as a spinal scan.
Click to expand...
Yes, that must be worrisome indeed. The Dr. is at least kind and is trying....let's hope they're doing the testing 24 hrs./day. Emergencies can take priority here, especially over a weekend, so I hope his Dr. has made it very clear that he is an emergency situation. Then one has to locate a neurosurgeon....and in a place as large as Newcastle, one would think one would be on call. Wishing all of you well. Yours, Lenora.
You must log in or register to reply here.
Share: Facebook Twitter Reddit Pinterest Tumblr WhatsApp Email Link