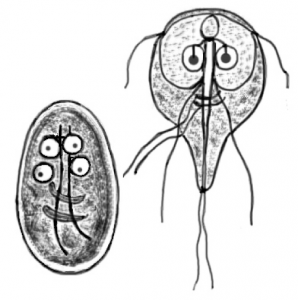 (Outbreaks of 'CFS' do happen but they are rarely documented now. In this article, Oceanblue from the Phoenix Rising Forums, examines a Giardia outbreak in Norway which resulted, years later, with a significant number of people suffering from a chronic fatigue/pain condition- CJ.) ​
A new study reports at least 5% of patients with CFS nearly 3 years after an acute Giardia enteritis infection, providing evidence of yet another infectious agent that can trigger CFS along with Epstein-Barr Virus, Viral meningitis and the bacterium Coxiella burnetii, amongst others. Other studies on the same outbreak also show a strong link between the acute Giardia infection and both chronic fatigue and IBS.​
Overall, then, there is strong evidence that Giardia infection can lead to CFS in a significant number of patients​
Giardia lamblia is an important cause of gastrointestinal illness throughout the world, particularly in developing countries. Apart from person-to-person transmission, the main infection route is through drinking water.

In Norway, cases are normally rare and most come from those who have visited or are from areas where it is endemic. However, in autumn 2004 there was an outbreak in the second city of Bergen with a total 1,300 cases of laboratory-confirmed cases of Giardia (vs the norm of 1-2 cases annually), with probably as many cases again that weren't laboratory confirmed. The main group affected were adults aged 20–29, representing 47 % of the cases, with few cases in children or the elderly - but this largely reflected the demographics of the parts of Bergen most affected.

The overall 'attack rate' was only 1.5%, and drinking more than 5 glasses tap water at home was a risk factor for infection (OR 5.9, 95% CI 1.7 – 21), suggesting contaminating levels of Giardia in water were generally quite low. Leaking sewage pipes combined with insufficient water treatment was the likely cause of the outbreak (normal chlorine treatment doesn't kill Giardia spores).

A questionnaire mailed to all lab-confirmed cases 2 years after the outbreak found fatigue was reported by 41% and abdominal symptoms by 38%, with a strong association between these two symptoms; significantly they also found (in a sub-sample) that in most patients symptoms were not due to chronic infection.

The 2-year follow-up study was criticised for not using validated questionnaires and for lacking a control group, but a later 3-year follow-up study used a matched control group and validated questionnaires. It found chronic fatigue in 46% (controls 12%) giving an adjusted Relative Risk (RR) of 4.0 and Irritable Bowel Syndrome (IBS) prevalence of 46% (control 14%, RR 3.4). IBS and chronic fatigue were associated and the Relative Risk for having both fatigue and IBS was 6.8. 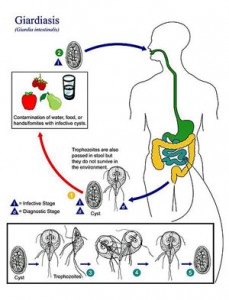 The 2-year follow-up study also found a link between protracted and severe Giardiasis and subsequent fatigue and abdominal symptoms. This is particularly interesting as it tallies with the Dubbo Study findings that acute sickness was the strongest predictor of post infectious fatigue. In particular, the study found that retrospective reports of malaise at the time of the initial infection, and more than one treatment course were significantly associated with fatigue. Unfortunately, retrospective reports of symptoms are not very reliable. Similarly, time off work/education might be due in part to post-infectious fatigue, not the initial infection in which case the correlation with post-infectious fatigue reveals little.

Nonetheless, the correlation with more than one treatment course, which is probably a good measure of protracted Gardiasis infection, and fatigue remains. These results are consistent with a role for severe/protracted initial infection in subsequent post-infectious fatigue, but are hardly conclusive.

And so to the current study, which found a high rate of CFS developing among those with lab-confirmed initial Giardiasis. The authors state 5% as the lower limit of prevalence, which is very high, particularly as the patients had been ill for a mean of 2.7 years. In prospective studies of glandular fever it's usually around 10% after just six months, falling to maybe 6% after one year. This adds yet another infection to the list of agents that can trigger Post-Infectious CFS. Others include EBV, Ross River Virus, C Burnettii, and viral Meningitis. Giardia is particularly interesting as the first Protozoan (large single-celled organism, like amoeba) to be linked to CFS (a study from 1992 also links Giardia to CFS).

As ever, there are some weaknesses in the study, though none are fatal, in my opinion. First, the authors only diagnosed CFS cases from amongst those referred by general physicians or attending a particular medical centre. Disappointingly, they didn't try to sample other people from the original Giardiasis outbreak cohort as there are very likely to be additional CFS cases in this group. That's the basis for the claim that 5% is the lower limit for CFS post-Giardiasis.

Perhaps more significantly, the authors stated they used the 1994 Fukuda CFS definition for diagnosis yet they failed to carry out all the diagnostic steps required by the Fukuda paper. Normally, I'm not too fussed if the implementation isn't perfect, if the CFS starts with an infectious episode. However, in this study the majority of patients (58%) reported that fatigue started months after the acute onset of giardiasis (which could include over a year after onset). In the Dubbo study, fatigue in CFS cases started at onset of the initial, triggering infection. So both the incomplete diagnosis and issue of late onset fatigue make it possible for critics like reviewer Peter White to claim these cases are unrelated to the initial giardiasis infection.

This adds yet another infection to the list of agents that can trigger Post-Infectious CFS. Others include EBV, Ross River Virus, C Burnettii, and viral Meningitis. Giardia is particularly interesting as the first Protozoan (large single-celled organism, like amoeba) to be linked to CFS​
In mitigation, the authors did state they excluded any cases where the giardiasis symptoms had stopped before the fatigue started, and the 3 year follow-up study, above, robustly shows that fatigue levels generally in those infected are much higher than in matched controls.

Minimum estimate of CFS after the Giardia outbreak

In reality, a good number of the later onset cases are also likely to be linked to the initial infection, and there will almost certainly be CFS cases amongst infected individuals not followed up. Other studies of post-infection CFS indicate that the initial rate of CFS could have been much higher, with a significant recovery rate in the early stages.

Overall, then, there is strong evidence that Giardia infection can lead to CFS in a significant number of patients

(Viruses, bacteria and protozoan's have now all been linked to a post-infectious CFS-like condition. Each attacks a different part of the body yet each has ultimately resolved to a similar fatigue/pain state in some individuals.

The questions abound....Do all these individuals all have the same condition and if, so, what is the tie that binds? How does the presence of an infection, perhaps any infection, trigger ME/CFS in some individuals? As Oceanblue points out both the Dubbo studies and this one suggest that more severe infections (with their greater immune activation) may be more likely to trigger ME/CFS. Or does the CFS-like condition caused by these pathogens look similar on the surface but very different below?

Whatever the answer, adding Giardia to the list of pathogenic triggers suggests that ME/CFS may be far more common in the developing world, with its poorer sanitary conditions, than in the developed world. Thanks to Oceanblue for allowing us to post his summary of this intriguing development - CJ)