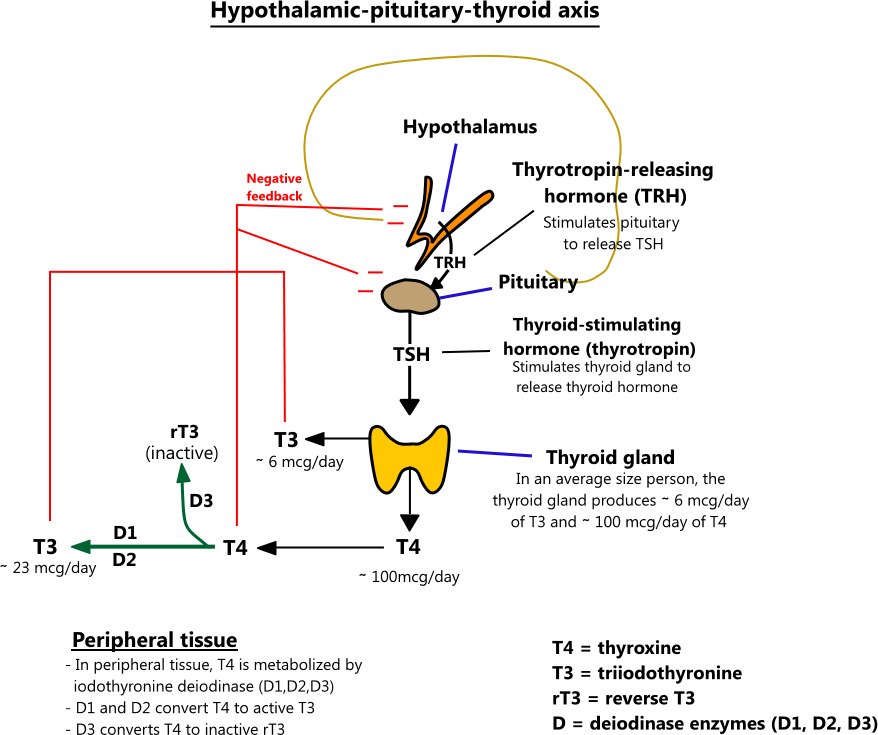 Interesting! In Ray Peat's recommendations for T3 I thought he said something about ~2-3 mcg T3 an hour which is why he says not to take more than that at once. Will have to look into this more, I may have to start with even smaller doses than I thought.

That is Fascinating, @pattismith
Thank you for that, plus, it is nice to see you.

Nice to see you @Shoshana and @debored13

Here's the article where he talks about this:
http://raypeat.com/articles/articles/thyroid.shtml

I'm going to go thru the primary sources in a sec. despite not having much energy atm, b/c i may do thyroid therapy soon and want 2 clarify this

"The brain concentrates T3 from the serum, and may have a concentration 6 times higher than the serum (Goumaz, et al., 1987), and it can achieve a higher concentration of T3 than T4. It takes up and concentrates T3, while tending to expel T4. Reverse T3 (rT3) doesn't have much ability to enter the brain, but increased T4 can cause it to be produced in the brain. These observations suggest to me that the blood's T3:T4 ratio would be very "brain favorable" if it approached more closely to the ratio formed in the thyroid gland, and secreted into the blood. Although most synthetic combination thyroid products now use a ratio of four T4 to one T3, many people feel that their memory and thinking are clearer when they take a ratio of about three to one. More active metabolism probably keeps the blood ratio of T3 to T4 relatively high, with the liver consuming T4 at about the same rate that T3 is used.

Since T3 has a short half life, it should be taken frequently. If the liver isn't producing a noticeable amount of T3, it is usually helpful to take a few micorgrams per hour. Since it restores respiration and metabolic efficiency very quickly, it isn't usually necessary to take it every hour or two, but until normal temperature and pulse have been achieved and stabilized, sometimes it's necessary to take it four or more times during the day. T4 acts by being changed to T3, so it tends to accumulate in the body, and on a given dose, usually reaches a steady concentration after about two weeks. "

Idk if i can find fulltext rn

Also is reverse T3 really inactive or is that dogma?

rT3 has anti T3 action on non genomic T3 activity on ion channels, several articles are quoted in this thread:

If you whish to take liothyroxine and you wish to achieve a rather constant blood level, you have to take it every 8 hours.
There is a professor who studied it, but I can't remember where I put her study in PR...
You must log in or register to reply here.
Share: Facebook Twitter Reddit Pinterest Tumblr WhatsApp Email Link