The misogyny of iron deficiency 2021

Summary
Anaemia is common, particularly in women and the commonest underlying cause, iron deciency, is often overlooked. Anaemia is associated with increased morbidity and mortality in patients undergoing anaesthesia; however, women are dened as being anaemic at a lower haemoglobin level than men.

In this narrative review, we present the history of iron deciency anaemia and how women’s health has often been overlooked. Iron deciency was rst described as ‘chlorosis’ and a cause of ‘hysteria’ in women and initial treatment was by iron lings in cold wine.

We present data of population screening demonstrating how common iron deciency is, affecting 12–18% of apparently ‘t and healthy’ women, with the most common cause being heavy menstrual bleeding; both conditions being often unrecognised.

We describe a range of symptoms reported by women, that vary from fatigue to brain fog, hair loss and eating ice.

We also describe experiments exploring the physical impact of iron deciency, showing that reduced exercise performance is related to iron deciency independent of haemoglobin concentration, as well as the impact of iron supplementation in women improving oxygen consumption and tness.

Overall, we demonstrate the need to single out women and investigate iron deciency rather than accept the dogma of normality and differential treatment; this is to say, the need to change the current standard of care for women undergoing anaesthesia.
Click to expand...
The misogyny of iron deficiency (wiley.com)

It is important to understand that symptomatic iron deciency can occur without anaemia.

Iron is an essential trace mineral that plays a role in many organismal and cellular processes in addition to the transport of oxygen by haemoglobin.

Iron is important for mitochondrial energy metabolism, and a large number of enzymatic processes
across multiple tissue sites affecting function in myocardial and skeletal muscle, neurotransmitter production and the immune system (T-cell activity in particular) [24, 25].

As iron deciency develops, iron is initially utilised from stores (ferritin) predominantly in the liver but subsequently sequestered from these iron-enzymes and iron-proteins in tissues in an attempt to preserve erythropoiesis [24–26]. Consequently, symptoms relating to iron deciency can be diverse, relating to depletion of cellular iron function in multiple tissue types, and exist long before prolonged iron
deciency restricts haemoglobin synthesis in the bone marrow and anaemia develops. While there is overlap in the common symptoms of iron deciency and anaemia: fatigue, lethargy, dizziness, and shortness of breath; the symptoms of loss of concentration, headaches and easy bruising are more indicative of iron deciency and a few symptoms are highly specic to iron deciency such as restless leg syndrome, hair loss or pica (inexplicable eating of ice, paper or dirt) [27–29].

To assess the range and prevalence of symptoms experienced by women with iron deciency [30] we
undertook a consumer involvement exercise through social media. Initially, a poll was developed to ask women about their symptoms in their own words. Responses were collated and returned as part of a short questionnaire to ask about women’s symptoms and experiences with iron deciency. The initial poll returned a total of 10,521 responses describing 75 symptoms. Subsequently, 457 individuals undertook a second-round detailed questionnaire.

This highlighted the novel symptom of ‘brain fog’ (described by patients to be the inability to think clearly,
concentrate or focus. Brain fog was also described by some responders interchangeably as ‘mummy brain’).
Click to expand... 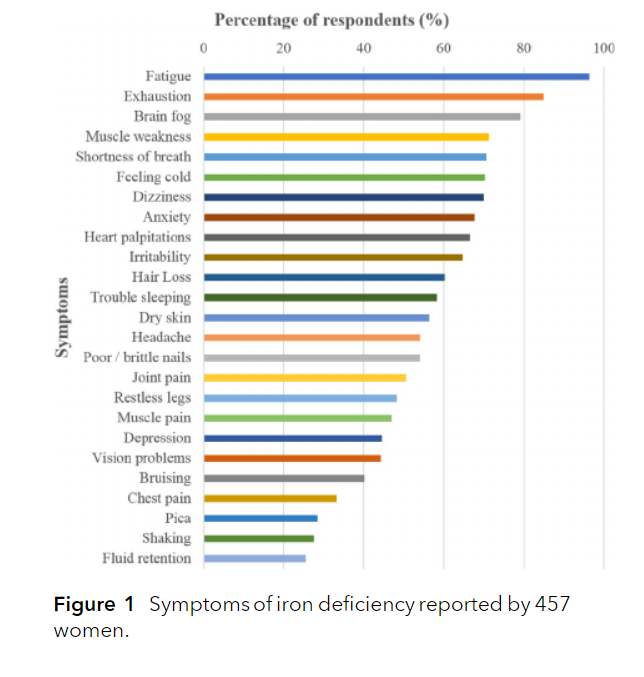 I'm pretty sure that I'm close to running on empty as far as iron goes, but the problem I (and probably my doctors) have is I also have heart problems, high BP and a penchant for forming blood clots. I don't know what to do about it, apart from upping my intake of red meat and other foods containing iron.

But, yes....I agree that women have had iron deficiency for a long time. I think it's also important to note that you don't have to have every single symptom. Things come and go, but it's worthwhile to have it checked out. L.

lenora said:
I'm pretty sure that I'm close to running on empty as far as iron goes, but the problem I (and probably my doctors) have is I also have heart problems, high BP and a penchant for forming blood clots. I don't know what to do about it, apart from upping my intake of red meat and other foods containing iron.
Click to expand...
I asked myself how our ancestors managed to avoid iron deficiency, and the answer is simple:
-before neolithic times, our ancestors were eating a lot of meat and giblets.
-after neolithic revolution, they were eating less meat but still liver regularly I guess, something we don't do as much nowadays


lenora said:
But, yes....I agree that women have had iron deficiency for a long time. I think it's also important to note that you don't have to have every single symptom. Things come and go, but it's worthwhile to have it checked out. L.
Click to expand...
yes symptoms vary according to each woman own sensitivity.

But the big problem I see is the lack of absolute marker and range for iron deficiency.

If you are healthy, ferritine is considered normal if above 20 mcg/l (sometimes less for women!!), but in many diseases, the low limit is often considered 50 or even 75 or 100 mcg/l!!

And if you have concomitant inflammation, you can have iron deficiency with ferritin between 100 and 250 if your transferrin saturation rate is under 20%

I wonder if there is one doc able to seriously consider and understand this question, apart from a few ones!

I've actually been researching this sort of thing a lot lately.

Low stomach acid seems to connect many dots. At least for me, and my research.

Low Stomach/Gastric Acid (Hypochlorhydria) can lead to many of the common ME/CFS symptoms. And can eventually lead to SIBO.

And enterovirus in the gut is what I've found that can lead to chronic low stomach acid.

sometexan84 said:
I've actually been researching this sort of thing a lot lately.

Low stomach acid seems to connect many dots. At least for me, and my research.

Low Stomach/Gastric Acid (Hypochlorhydria) can lead to many of the common ME/CFS symptoms. And can eventually lead to SIBO.

And enterovirus in the gut is what I've found that can lead to chronic low stomach acid.
Click to expand...
interesting!

I wonder if low iron may be an important risk factor in ME/CFS.
Low ferritin has already been found in Fibromyalgia, and low iron is a factor for peripheral neuropathy in diabetes.
It's also associated to brain disorders like restless legs, ADHA,

I have a new young neuropsy who seems interesting in my case, and he seems to be convinced my troubles are related to a chronic iron deficiency. Not sure if things can be reversed after so many years, but it's worth trying iron supplementation.
He told me the goal is to raise my ferritin up to 75 at less...
Last edited: Oct 6, 2021
M

Interesting. I used to eat ice like crazy when i was young. Had most symptoms since I was a teen. Had extreme anemia during stressful times.
L

I'm going to take low dose iron tablets every other day for a short time. A bit dangerous for me perhaps, but I hate this no-energy feeling. And yes, I used to love crunching on ice (it's very bad for your teeth though....for all you wanna-be crunchers).

Giblets and liver were commonly eaten when I was young. Of course dietary changes made such things obsolete. I wonder if you can even buy liver these days? I'll have my husband check. Good with onions.

Yes, I'm taking my 'B' vitamins, giving myself shots and even thiamine. Maybe I'll back off and take the tablets just once every 3 days or so. They're actually prenatal iron tablets. Yours, Lenora.
M

I've taken iron for some time and had all these tests done for internal bleeding. My levels are normal and had no effect on my me/cfs. I don't feel better at all. My dad had low iron his whole life and he had sooo much energy and stamina almost up the very end of his 82 years. Even in his last weeks, he was working out with weights everyday and dancing and traveling. But he napped alot before he died.
L

Hello @Mouse girl......What was the name of the tune your father danced to? Maybe that's where we're going wrong.

In any event, good for the man but I don't know how he did it. Yours, Lenora.
M

he would dance to loads of different music. My dad told me he and his girlfriend would even dance in the "disco" at casinos but doing ballroom dancing to modern music.

my dad was just super healthy. He ate terribly his whole life but he almost never got sick but he worked out alot. he always had lots of energy. Funny thing is, i got this illness from his side of the family. his sister had a mild version of cfs and my doc said, ah, yes, there is the genetic component.
L