Spina thyr is developped since 1999 by a german team, but isn't yet used in daily practice, only by some searchers. It was used in the study that found a subset of CFS/ME patients affected by the Low T3 Syndrome.

Thank you @debored13 who shared it:

When you download the free software, you can enter your throid lab values (TSH, fT4 or TT4 and fT3 or TT3) and get an evaluation of your thyroid function (secretory capacity) and deiodinases activity, and your tissues sensitivity to Thyroid Hormons.

It can give you some interesting informations, even though your values are all in the normal ranges.

edit from the manual use introduction:


It allows for calculating the thyroid's maximum secretory capacity (GT or SPINA - GT) and the sum activity of peripheral 5' - deiodinases (GD or SPINA - GD) from levels of TSH, (F)T4 and (F)T3 that have been determined once only (SPINA Thyr).

SPINA Thyr has been evaluated in clinical trials covering more than 10 000 subjects with various disorders of thyroid homeostasis.

GT has been demonstrated to correlate with thyroid function and gland volume as obtained via ultrasonography . Its retest reliability is higher than that of TSH, FT4 or FT3. GD is reduced in nonthyroidal illness syndrome (NTIS = low T3 syndrome) and increased in states of hyperdeiodination, and it correlated in two large trials with TSH levels, thus mirroring intracellular cAMP levels .

These structure parameters may therefore contribute to diagnosis of rare or at least less obvious thyroid disorders.

In addition to GT and GD SPINA Thyr is able to calculate TTSI and Jostel’s TSH index, two static function tests for the assessment of pituitary function...

Hormone levels should have been obtained simultaneously in order to avoid bias by transition effects. Calculating GT in patients that are treated with levothyroxine (L - T4) is of little, if any, value.

Likewise it is not recommended to calculate GD in patients that receive substitution therapy with liothyronine (L - T3) or triiodothyroacetate (TRIAC).

It may be interesting, however, to obtain a value for the unaffected structural parameter in affected cases, e.g. for SPINA - GD in patients on L - T4 substitution. You may select the appropriate check boxes for substitution therap y in the upper right of the main window in this situation.

This causes SPINA Thyr to suppress calculation of parameters that would be misleading.

Usage of SPINA implies that you agree to its license and conditions with respect of the council directive 93/ 42/EEC of the European Union. This information is included with the license file that comes with SPINA Thyr, and it is available online from http: / / spina .sf.net .
Last edited: Mar 17, 2018

"Persons treated with iodine (healthy volunteers and patients with diffuse goiter) had a significantly higher GT than individuals without treatment, indicating that iodine deficiency may have more consequences than previously expected"

"In comparison with the control group GT was significantly lower among Hashimoto patients (p<0.05), whereas goiter and Graves patients showed a significantly higher GT"

pattismith said:
from this paper,

"Persons treated with iodine (healthy volunteers and patients with diffuse goiter) had a significantly higher GT than individuals without treatment, indicating that iodine deficiency may have more consequences than previously expected"

"In comparison with the control group GT was significantly lower among Hashimoto patients (p<0.05), whereas goiter and Graves patients showed a significantly higher GT"
Click to expand...
interesting, I've read a lot of ray peat and he says true iodine deficiencies are rare, but on the other hand I don't eat much table salt at all, which is how most people get their iodine. So i wonder about looking at that
W

I don't use table salt either, so I assume that I was somewhat deficient in iodine before I discovered the iodine and T2 responses. Those first supplements of iodine (from multivitamin/mineral tablets) had dramatic effects. I expect that my every-three-weeks supplementation of iodine or T2 meets or exceeds my dietary iodine requirements.

I can't wait to install this software when I return home in a few days! This research is what I was looking for all the time when thinking of thyroid...
Thanks @pattismith and @debored13 for sharing this useful information about SPINA Thyr. And thanks @Gondwanaland for calling my attention to this thread!!
Why I am so enthusiastic: I always had my thyroid labs largely within normal range, but with a lot of reading I saw some abnormalities in the constellation... I understand that exactly this is the main purpose of this software.

To anyone with orthostatic issues, here a few lines why thyroid is so important:
The above addresses me 100%: I have POTS, lowish cardiac output, decreased availability of nitric oxide, increased systemic vascular resistance and diastolic dysfunction. Do you have orthostatic probs? I am happy to help how to calculate the above parameters, what measurements one needs from what type of cardiologist ... and nitric oxide you can (indirectly) test at home.

I am looking forward to relate all this to thyroid probs!
Last edited: Mar 14, 2018

@Lolinda ,
Let's hope Spina will help you understanding more about your thyroid function!

For me, it turned to point out that I have a thyroid hormons hypersensitivity.

In fact, I have an hypersensitivity for some thyroid hormons functions and a resistance for some other functions (the few ones that are conteracted by rT3, mostly on sodium/potassium currents)
Last edited: Mar 14, 2018
W

I didn't have any problem with low blood pressure when changing positions, but for a while I was at risk of passing out after activities that rapidly increase heart rate (short sprint or even rapid walk, lifting something heavy). Is that related to orthostatic intolerance? It went away after a few weeks or months, and my doctor didn't think it was a concern, but I wondered what was responsible.
N

I have the same issues as you and my POTs is very extreme; after standing for 5 mins my HR increases by 30 pts and my BP drops. The slightest activity leaves me feeling like I've run a marathon including sitting with feet on floor and talking.

I have tried many thyroid, adrenal and POTS meds....nothing has helped. I have an adverse reaction to every drug I take except for Klonopin.

The above addresses me 100%: I have POTS, lowish cardiac output, decreased availability of nitric oxide, increased systemic vascular resistance and diastolic dysfunction.

Have you found a treatment that helps your POTs given all the sub-conditions you have listed above.

My symptoms were DX'd by Cheney, Montoya and Dr. Kaufman.

@pattismith ......issues are similar to yours also; have you found any treatments that help? Thanks.

@Wishful ,
I have read several of your posts on PR (on different threads) where you were asking for answers as why you respond to T2 and not to T3/T4. Runing your datas with Spina may help you to understand it, at less you have nothing to loose by trying it.
If you don't feel to do it yourself, you can ask someone to do it for you, just post your datas here, and we will do it for you.

@Navid
I don't have POTS, I have muscles/tendons/joints issues and head pressure/slow brain, PEM from any stress/exercise/emotions.

I finally discovered I have a Low T3 syndrome with all my thyroid panel in the normal ranges. I started a treatment with T3 and Idebenone and got my symptoms resolved, although they return when I take too much so I still have bad days and need to find the good balance.
N

thanks for the info....appreciate it. glad you found a treatment that helps you. also glad you DONT have pots! : )
W

I managed to dig up an old test result (2002) with the required data. Canadian doctors don't tend to give out printouts of all the test results, so I don't have any newer complete data. Running the software under linux is more work than I feel up to.

If that's the data needed, does the software say anything useful about it?

I'm skeptical about how much value can be obtained from one sample. I remember that two sets of tests not long apart showed quite different levels of the various free and not free hormones.
Last edited: Mar 16, 2018

Wishful said:
I managed to dig up an old test result (2002) with the required data. Canadian doctors don't tend to give out printouts of all the test results, so I don't have any newer data.

Wishful said:
managed to dig up an old test result (2002) with the required data. Canadian doctors don't tend to give out printouts of all the test results, so I don't have any newer complete data. Running the software under linux is more work than I feel up to.

If that's the data needed, does the software say anything useful about it?
Click to expand...
In 2002 it's possible that free T3 wasn't available at the time. Free T3 index, calculated from serum total T3 and T3-uptake, is highly correlated with free T3, measured by equilibrium dialysis. Therefore, you could substitute free T3 index for free T3.

I had never heard of T3 uptake before

your results from your 2002 datas indicate a franc TH resistance at that time, your TTSI is 358 (maximum is 150) 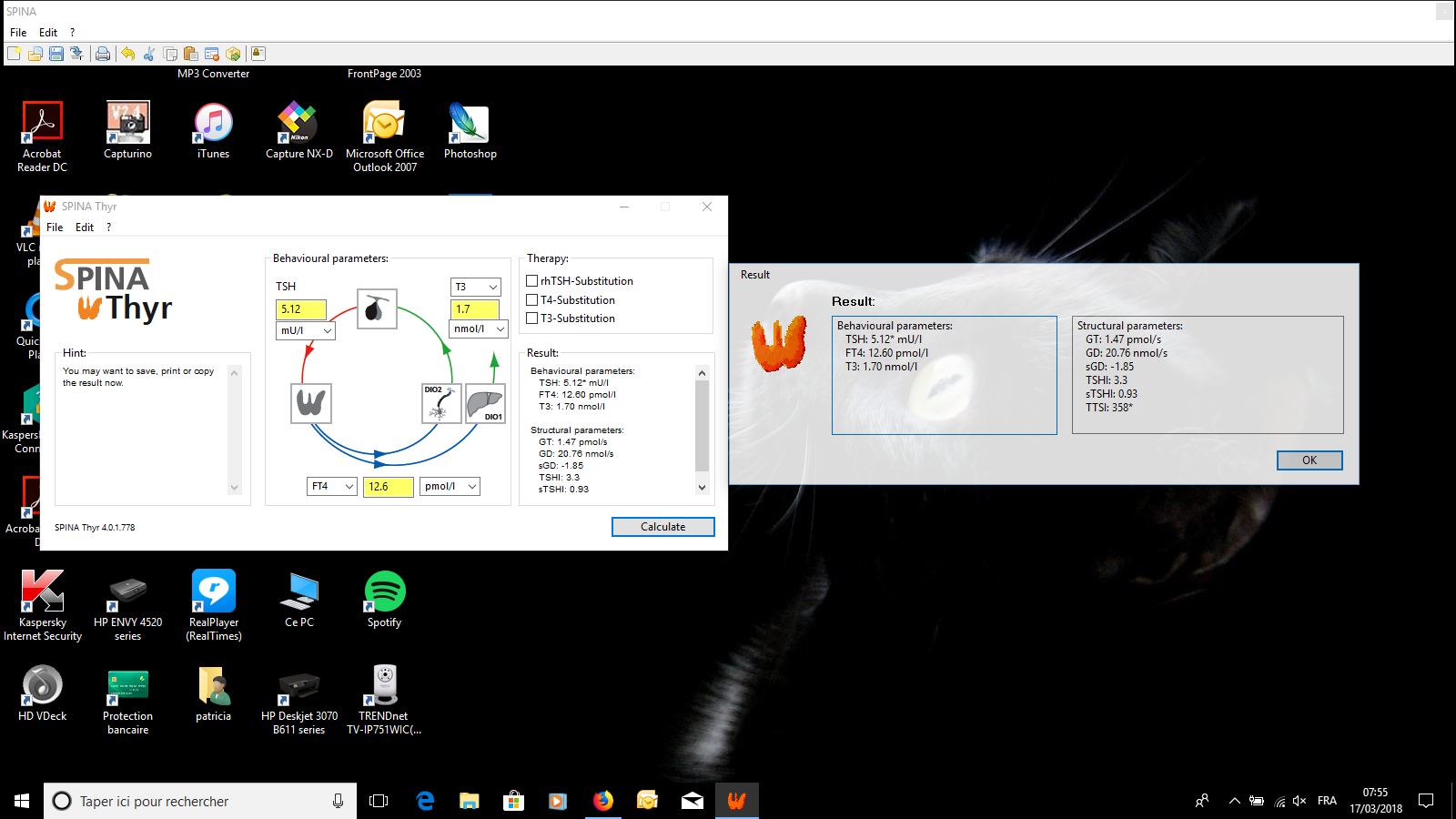 I see one can check the box for hormone replacement, so I suppose I could use the software after all even taking T4-T3 replacement?

Gondwanaland said:
I see one can check the box for hormone replacement, so I suppose I could use the software after all even taking T4-T3 replacement?
Click to expand...
Yes, it seems possible

Edit: here is my own result with normal ranges

Here what they found un the Low T3 syndrome study :

@Wishful and me, even with opposite TTSI, have GD close to the low limit.
GD is the sum activity of our 5´-deiodinases (D1+D2)
Wishful, your GT was not high which may correlate with a need for iodine
Last edited: Mar 17, 2018
You must log in or register to reply here.
Share: Facebook Twitter Reddit Pinterest Tumblr WhatsApp Email Link