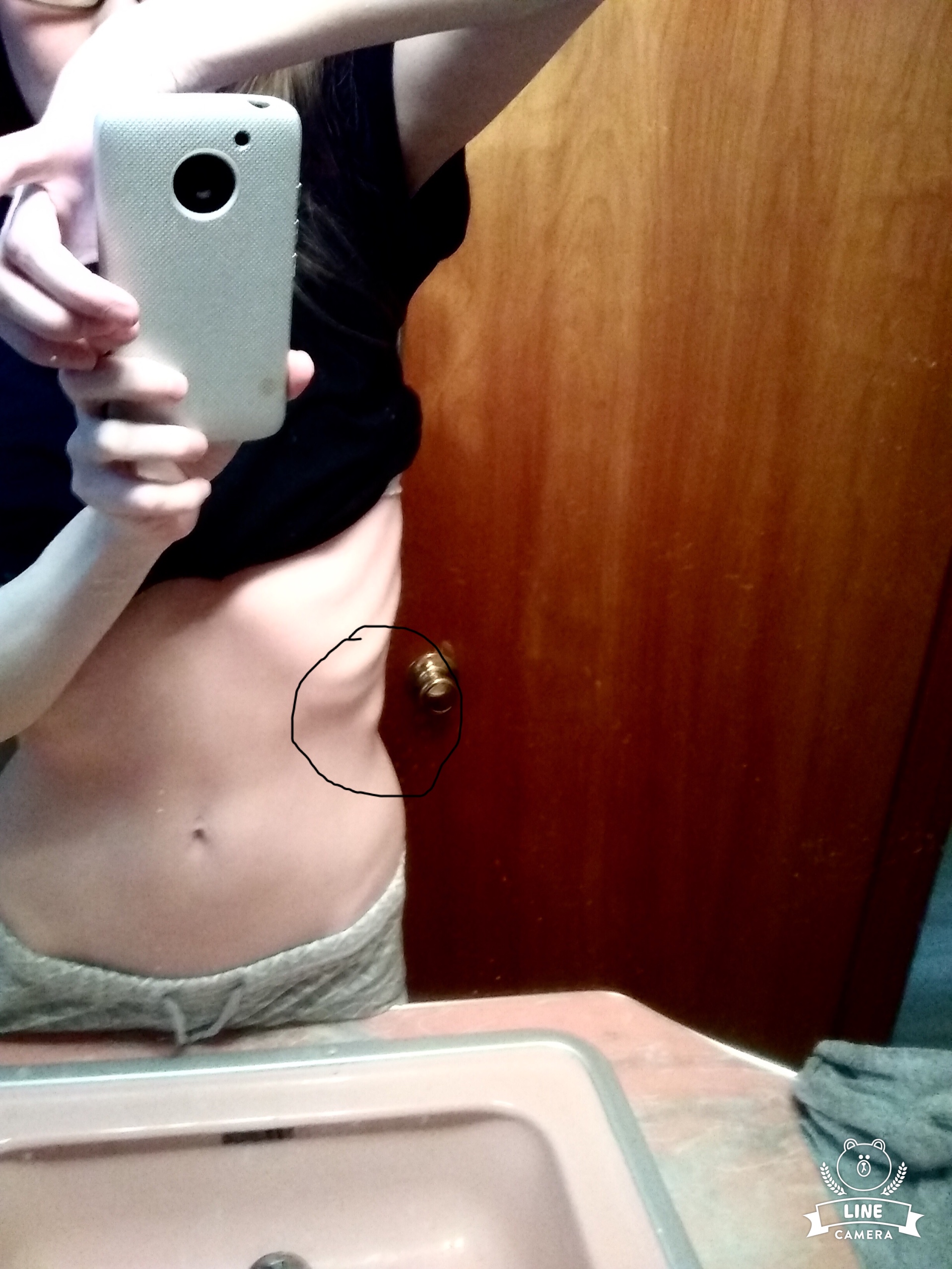 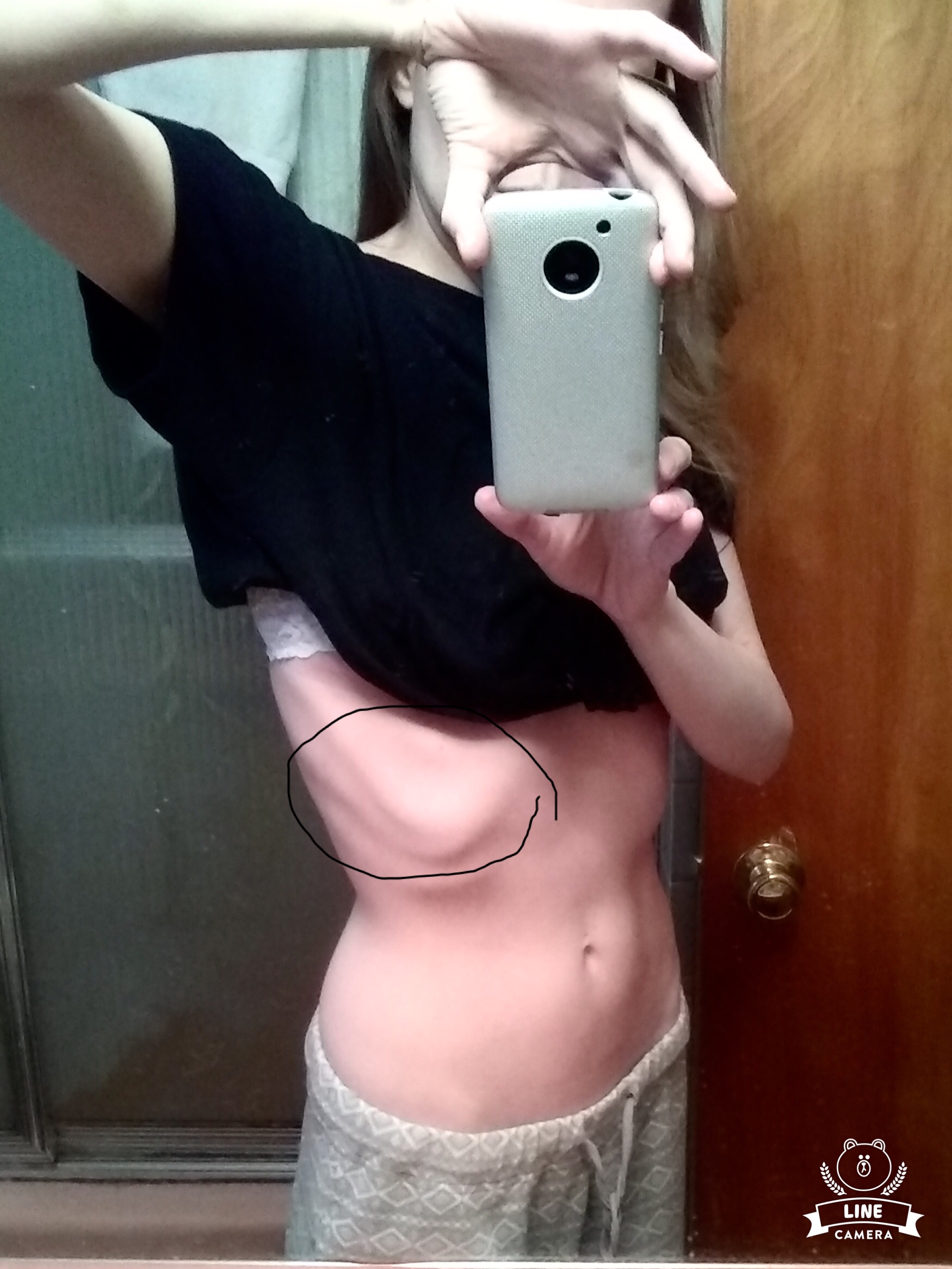 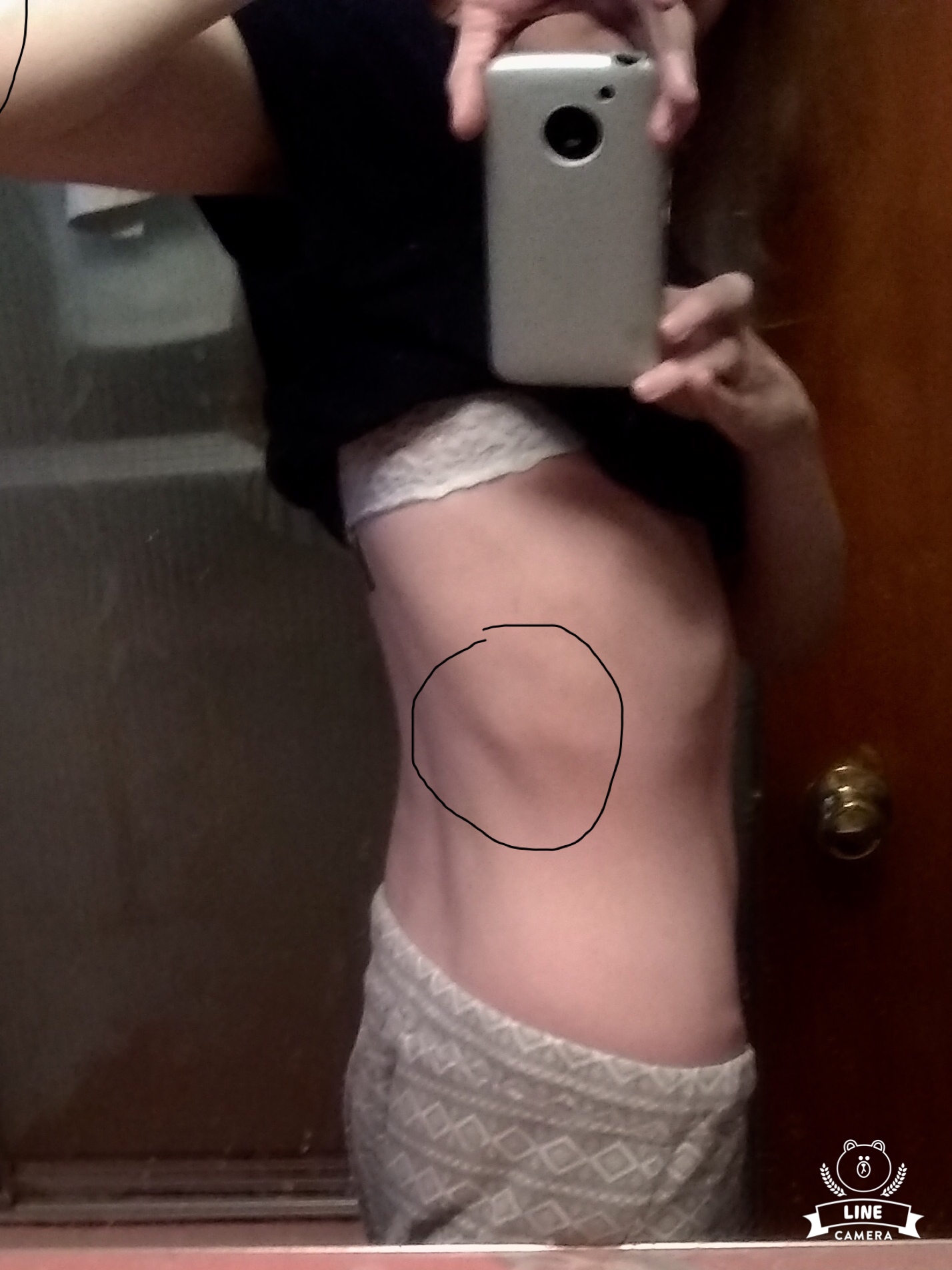 I apologize for so many pictures but I wondering if any of you have this or something similar. My ribs started to ache a couple of years ago. They slowly started to just out in unusual spots and they are very painful. I had an x-ray but the results didn't show anything out of line.

I'm currently being treated with lidocaine patches and increased mito cocktail but they seem to be progressing.

Do you have EDS (Ehlers Danloss Syndrome)? Some people with this can have a problem with subluxing ribs that slip in and out easily.
G

I haven't been evaluated for it yet but my Dr suspects that this isn't EDS. Do you know if you can have a subtle case through life that dramatically worsens as you age?
Last edited: Mar 20, 2019

No one really understands what is going on with EDS/HSD. There is some acceptance that it can manifest mildly initially, then often worsen around puberty, menopause or with other hormonal shifts. Some people think viruses or other illness can trigger a worsening too.

Would recommend seeking out a Rheumatologist that specialises in the area of hypermobility, criteria and understanding is changing fairly rapidly. It would also give you the best chance of getting help with the common comorbidities like POTS and MCAS that are increasingly recognised now in this population.

Hi Ryan,
Thanks for your response. Do you think that it matters that I have a low score on the Beighton scale? I feel like that would be the first thing that they start with.

I do however suspect both POTS and MCAS. It just tough in my area as the Drs don't have a great reputation in this field. Do you know if there are any genetic mutations that would qualify? I do have a mutation on my COL12A1 gene.

Beighton self-assessment is not very reliable, you may be surprised with what an experienced Rheumatologist scores you vs what you score yourself (or what an inexperienced general practitioner thinks). I never suspected I was particularly hypermobile but went for expert assessment because of a POTS diagnosis, I ended up with a score of 5/9. Hypermobility can be a lot more subtle than the extreme 'party-trick' stuff you see on the EDS overviews.

Also, there's nuance. Areas where I am most hypermobile (spine and shoulders) are not covered specifically by the Beighton test. Accordingly I lean more towards Hypermobile Spectrum Disorder rather than Hypermobile EDS, which is not to say HSD is always less severe - you're vulnerable to pretty much all the same comorbidity regardless.

I'm not particularly up on the genetics. I know that genetic analysis plays an important role in excluding the other types of EDS (classical, vascular etc. not hEDS), but as far as I'm aware no confirmed genes have been found for hEDS. I would suspect the non-hEDS types would generally be more severe and come with their own specific indications that you probably would have become aware of by now.

Thanks Ryan, I'm going to do some research about practioners in my area. I'd never even heard of hypermobile spectrum disorder, have the doctors been helpful since you have gotten this diagnosis?

You mentioned that you are hypermobile in your spine and shoulders. When I look in the mirror I can sometimes actually see the socket pull out a bit on my left shoulder. Also my spine hurts and makes snapping, rubber band kind of noises. Many of my joints do actually, loud cracking and snapping noises. Do you experience similar?

HSD is part of a redefinition of hypermobility disorders a couple of years ago:

The hEDS criteria was tightened up, some patients that were previously diagnosed as EDS Type 3 no longer meet the criteria for the broadly equivalent hEDS, and are now considered HSD instead. Going even further back you might also see Joint Hypermobility Syndrome being used, again broadly equivalent to HSD.

HSD is the catch-all for hypermobility that doesn't quite meet the severity required for hEDS or the specific joints expected. Someone told me the specific joints were selected to try and isolate a genetic phenotype but I don't know how accurate that is. There's so much overlap in general symptoms and comorbidity that from a practical point of view as a patient it doesn't really matter.

If you see a non-specialist Rheumatologist don't be surprised to see the old 'Joint Hypermobility Syndrome' diagnosis trotted out (despite it being out of date for years), as well as total lack of POTS/MCAS awareness and very little helpful treatment.

Goldfinch said:
have the doctors been helpful since you have gotten this diagnosis?
Click to expand...
I came at this backwards, I had diagnoses of POTS, SIBO, Histamine/MCAS issues before seeing Rheumatology and the awareness/treatment of these helped me a great deal. All that was left for Rheumatology to do was suggest some hydrotheraphy/physiotherapy, which helps a little.

Goldfinch said:
Also my spine hurts and makes snapping, rubber band kind of noises. Many of my joints do actually, loud cracking and snapping noises. Do you experience similar?
Click to expand...
Yes, I was told this is quite common in the hypermobile, as well as 'flares' where the crepitus (cracking joints) can become much worse temporarily.

My situation is a bit more complicated though as I appear to have an inflammatory arthritis (and possibly a related IBD) too - this gets messy because aspects of the hypermobility hide the stiffness and loss of range caused by the arthritis. And until really obvious, the inflammatory pain just gets put down to mechanical pain related to hypermobility.
G

Thank you so much for this information, it's a lot to take in. A lot of interesting reading as well. The mast cell information in particular.

I'm glad to read that you can have "flares". THats what seems to be happening now and it's alarming.

The one question that I have with my ribs though is that they don't ever move back into place. once they have shifted out of place they never move back in. They have been like this for maybe two years and now I have a new one that is starting to ache, that same characteristic ache that happens every time.

BTW I have an appointment w/ a Rheumatologist at the end of next month. I hope that he can figure this out.

A chiropractor was able to get my ribs back to where they belonged using an Activator.
See https://en.wikipedia.org/wiki/Activator_technique

It wasn't all easy going, but it worked. Alternating heat and cold after treatments helped, along with some Flexeril. My chiropractor also noticed that my spine was more flexible and easier to adjust with traditional adjustments after I started taking spironolactone for fibromyalgia. It could take two weeks or more to feel the benefits of spironolactone.
G

CFS_for_19_years said:
A chiropractor was able to get my ribs back to where they belonged using an Activator.
See https://en.wikipedia.org/wiki/Activator_technique

It wasn't all easy going, but it worked. Alternating heat and cold after treatments helped, along with some Flexeril. My chiropractor also noticed that my spine was more flexible and easier to adjust with traditional adjustments after I started taking spironolactone for fibromyalgia. It could take two weeks or more to feel the benefits of spironolactone.
Click to expand...
I'm glad that a chiropractor was able to help. How long did it take to get them back in place?

Goldfinch said:
I'm glad that a chiropractor was able to help. How long did it take to get them back in place?
Click to expand...
Twice weekly visits for about 3 months, then once a week for 3 more months. This was about 25 years ago, so my estimate could be off. I think this is also a good estimate of what a chiropractor might tell you to expect.

I would recommend trying to find a chiropractor who is Advanced Proficiency Rated using this doctor locator:
https://doc.activator.com/
G

Wow, that's a lot of visits. Unfortunately I'm down to leaving the house once every couple of months for Drs visits mostly. It's tough when additional problems pop up,
G

Do any of you know if Mast cell activation syndrome can play into the joint laxity?
G

I just wanted to update that my rheumatologist thinks that my rib problems are due to either muscle weakness or possibly a tear. He recommended PT but so far with all of my other symptoms, especially the post exertional malaise I am not able to make an appointment.

After reading about Jennifer Breas recovery I am wondering if this could be related? I have popping and snapping noises in my neck and spinal cord. Maybe instability is knocking the ribs out?

I inquired about the hypermobility spectrum disorder but he didn't feel that this was a good fit in my case.
K

Goldfinch said:
I haven't been evaluated for it yet but my Dr suspects that this isn't EDS. Do you know if you can have a subtle case through life that dramatically worsens as you age?
Click to expand...
That's one reason why many EDS'ers can fall between the cracks, some people can have very stiff joints instead of being hypermobile and just get fobbed off. There would usually be some evidence of EDS popping up somewhere along the line within your family line though.

Goldfinch said:
Do any of you know if Mast cell activation syndrome can play into the joint laxity?
Click to expand...
Again, a very common combination with EDS.

A DO who still does manipulations can also help with dislocated ribs.

My mom gets that and the DO is the only one that can get it back into place. We also go to a chiropractor but he will only work on the spine and a little bit of the ribs so we found this DO.

Not all DOs do manipulations so if you look for one make sure they still do. (That sentence seems filled with a lot of unintentional redundancy. Sorry about that.)
G

Thank you kangaSue, yeah no history of connective tissue problems in my family that I'm aware of.
G