pattismith said:
it may be easy to check if patients reporting improvement with Ativan improve because of the GABA-A effect or the TPSO effect.... just trying other benzos with zero TPSO effect?
Click to expand...
See posts here https://forums.phoenixrising.me/threads/whitney-updates.47052/page-34#post-2321912

What I heard from other patients is that Lorazepam is the most effective. Others arent close.

mitoMAN said:
Took 4 dosages so far (50mg per day):
The first dose of Etifoxine gave a subtle energy boost while I noticed the following three dosages made me very tired.
I might switch over to taking the Etifoxine before bedtime.
As of now I will pause for a few days to compare to my baseline level and re-evaluate.
Click to expand...
Would be wonderful if you could keep us updated about your experience and hopefully improvements.
B

Etifoxine did nothing for me besides side effects. Also it isnt acting on TSPO. Which further supports the thesis of Lorazepam being using the receptor for improving Cfs.

Emapunil would be a great choice to test, but our group doesnt have the funds to do so atm. 10 Gram is about 4180USD (minimum order quantity to get that discount) and daily dosage seems to be about 90mg. So 10 days will run you about 400USD.

mitoMAN said:
Emapunil would be a great choice to test, but our group doesnt have the funds to do so atm. 10 Gram is about 4180USD (minimum order quantity to get that discount) and daily dosage seems to be about 90mg. So 10 days will run you about 400USD.

If only taken 1 Gram the price is 900USD for a 10days trial.
Click to expand...
And we have no idea how long of a trial would be required to see efficacy or not... or do you expect rapid symptom improvement similar to Ativan?
J

@mitoMAN your guy from Discord says it’s too difficult for him to synthesize?

UPDATE:
Panic Disorder
To investigate the anxiolytic potential, The TSPO agonist, XBD173 (Emapunil), has been investigated in healthy male volunteers using the cholecystokinin tetrapeptide (CCK4) challenge – a human model of panic- like anxiety. CCK4 fulfills the criteria for an ideal panicogenic agent and the panic induction by CCK4 is sensitive to clinically effective anxiolytic agents, including benzodiazepines.
Out of 85 subjects, 71 healthy volunteers that showed a clear panic response to the neuropeptide CCK4 were randomized into one of five treatment arms (n=14 in each group) which consisted of 7 days treatment with either placebo, the benzodiazepine alprazolam (2 mg/day), or one of three doses of XBD173 (10, 30, or 90 mg/day). A second CCK4 challenge was performed following the dosing
period. At the highest dose (90 mg/day), XBD173 attenuated CCK4-induced anxiety compared to placebo (p<0.036) to a degree similar in magnitude to the benzodiazepine.
The number of side effects reported with XBD173 was comparable to the incidence in the placebo group. In contrast, a much higher incidence was reported by the alprazolam treated group, in particular dizziness and somnolence. While 57% of the subjects treated with alprazolam complained of withdrawal symptoms such as sleep disturbances or restlessness, these were almost absent in the XBD173 treated groups.

At the highest dose (90 mg/day), XBD173 (Emapunil) attenuated CCK4-induced anxiety compared to placebo (p<0.036) to a degree similar in magnitude to the benzodiazepine alprazolam 2mg/day.
While 57% of the subjects treated with alprazolam complained of withdrawal symptoms such as sleep disturbances or restlessness, these were almost absent in the XBD173 treated groups. The number of side effects reported with XBD173 was comparable to the incidence in the placebo group.

So if we already benefit from lets say 0.5mg per day of alprazolam - then maybe 25mg Emapunil would be enough already. For me personally 0.5mg Lorazepam is a good dosage - havnt compared it to alprazolam tho.

leokitten said:
And we have no idea how long of a trial would be required to see efficacy or not... or do you expect rapid symptom improvement similar to Ativan?
Click to expand...
yes it seems we can expect rapid improvements - if it also acts similar to benzodiazipines in terms of speed of binding. No idea about tolerance - but withdrawl seems to be "non existant"

jaybee00 said:
@mitoMAN your guy from Discord says it’s too difficult for him to synthesize?
Click to expand...
yes sadly its too hard for him


The levels of a specific protein, called translocator protein (TSPO), are elevated in microglia during inflammatory activation. TSPO ligands have been used to monitor neuroinflammation, including in patients with Parkinson’s, and have shown neuroprotective effects. However, the mechanisms through which TSPO ligands modulate inflammation are still unclear.

Mice given emapunil also showed normalized expression of genes linked to the innate immune response, production of inflammatory molecules, and nerve cell generation and differentiation, among other processes.
Also, emapunil induced a shift from pro- to anti-inflammatory gene expression in microglia, which may underlie the compound’s protective effects, the team noted.
“This compound is able to penetrate into the microglia and flip a molecular switch that attenuates the inflammatory reaction,” Anja Schneider, the study’s senior author, said in a press release. Emapunil, added Schneider, “has already been tested in clinical studies on humans as a possible remedy for anxiety disorders. Therefore, data on this substance exists that proves its safety and tolerability in humans.”

Unlike undesirable effects associated with conventional
benzodiazepines, AC-5216 (Emapunil) had no myorelaxant effects, did not
affect the memory (passive avoidance response) or prolong
hexobarbitone-induced sleep in mice, even at doses as high as
1000 mg/kg, p.o., although it did slightly prolong the ethanolinduced sleep time at 1000 mg/kg.

LOW TOLERANCE?
AC-5216 when repeatedly administered for two weeks does not
induce tolerance to its anxiolytic-like effects or emotional and
somatic withdrawal symptoms. In contrast, diazepam treatment
withdrawal not only induced anxiogenic-like effects on the second
day of the withdrawal period, but also decreased body weight
gain and brought about body weight loss in mice.

STRONG TSPO BINDING!
XBD173 exerted acute anxiolytic effects, which were prevented by the TSPO antagonist PK11195, in the social exploration test and the elevated plus maze test in rats.


Pharmacology:
At the cellular level, the selective TSPO ligand XBD173 potentiated the amplitude and duration of GABA-mediated inhibitory postsynaptic currents in mouse medial prefrontal cortical neurons, which was prevented by finasteride. In contrast to diazepam, XBD173 did not act directly on postsynaptic GABAA receptors expressed in human WSS1 cells expressing rat α1γ2 and human β3 GABAA receptor subunits. These data provide further evidence that neurosteroidogenesis is involved in the differential effects of TSPO ligands on GABAergic neurotransmission. Neurosteroids modulate GABAA receptors via an allosteric site different from that targeted by benzodiazepines. These distinct sites of action at the GABAA receptor might explain the lack of tolerance development and withdrawal symptoms after XBD173-induced neurosteroidogenesis

Could this polymorphism explain why some ME/CFS Patients dont react to ATIVAN / LORAZEPAM?

As with the majority of TSPO radioligands, XBD173 binding is also affected by the A147T substitution – the polymorphism reduces XBD173 binding affinity to TSPO by a factor of roughly 15 fold. This is highly relevant to the failed XBD173 generalized anxiety disorder study, as the preceding XBD173 CCK4 study showed efficacy only at the highest dose of 90mg, with no effect seen at doses of 30mg and below. The 15 fold reduction in binding affinity means that the same dose will produce huge differences in TSPO occupancy between subjects who differ with respect to the A147T substitution. The clinical trial of XBD173 in generalized anxiety disorder was performed in a chiefly Caucasian population. Because 50% of Caucasians express at least one copy of the mutant allele, this means that half of the subjects in the XBD173 arm of the study were in fact receiving a sub-therapeutic dose of the drug.

I'm thinking of gathering funds to trial this. Would be the first CFS control to trial it and potentially be worth the shot for us.

Just noticed. Ron Davis found Ativan - a TSPO benzodiazepin temporarily modulates ME/CFS T-Cells and normalizes them.
He said he doesnt know if its through GABA or TSPO yet.
However pure GABA compounds had little effect.

-> The GOAL would be to find a TSPO Agonist that has no tolerance and withdrawl and can be taken regularly.

all have been reported to build up no tolerance or withdrawl compared to ATIVAN which has high tolerance and withdrawl.

I am currently funding synthesis of FGIN-1-27 and Olesoxime / TRO19622
We are also looking into funding #🆕emapunil-xbd173 - however I am running out of money.
I will gladly be the first ME/CFS control to take them and report back.

So WHY does Ativan not help EVERY ME/CFS Patient?
The Emapunil study gave some interesting insights. About 50% of Caucasian have at least one Allel of a SNP that lowers TSPO binding by 15x fold. This could explain why some Patients dont benefit from low/medium dosage Ativan (and with high dosage, GABA Binding would overstimulate compared to TSPO)
In this study, they needed the 15 fold dosage to have the same TSPO binding. 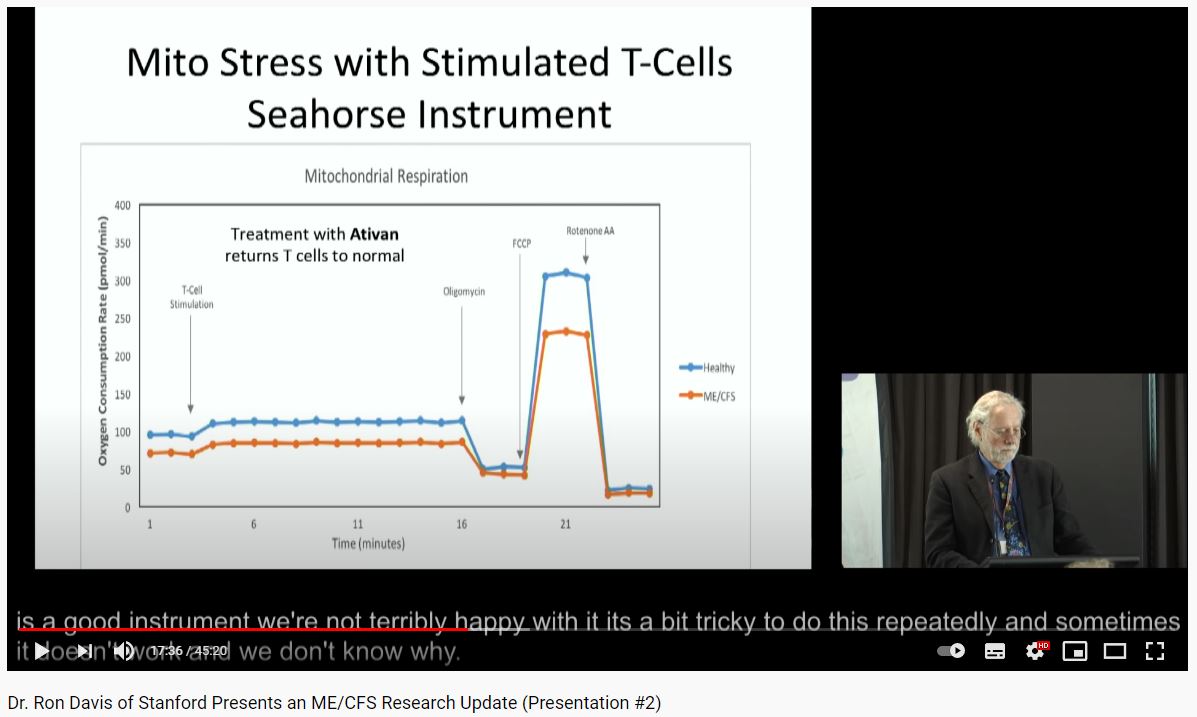 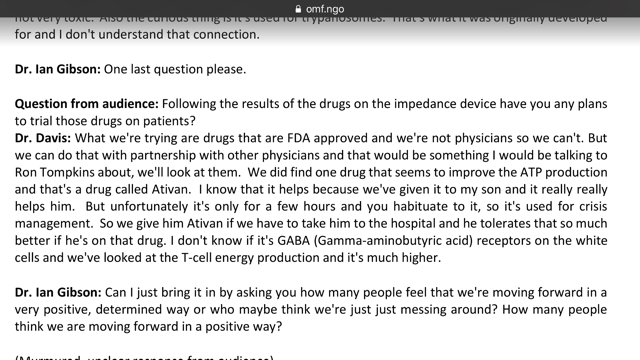 @dreamydays @Hoosierfans and me @mitoMAN are going to venture into taking Emapunil.
We ordered 500mg each and will report back if we have any success
Last edited: Apr 14, 2021

06.April Started Etifoxine taken at night 50mg per evening this time. (not in the morning as before) -> will take this for 30+ days to evaluate long term effect on Neuropathy and other areas.

Still going with Etifoxine at night. Tried taking a dosage during the day again and noticed I got tired again.
So Etifoxine doesnt have any rapid improvements for me.
Might help long term if taken at night, but I dont expect too much off it.

According to studies the retention time at TPSO is VERY LONG with a VERY POOR affinity. So there is no rapid effect to be expected from the TSPO itself with Etifixone.

That is why @dreamydays and @mitoMAN myself decided to also venture into Olesoxime / TRO19622 , a TSPO ligand binding at the Cholesterol binding site of TSPO and thus a different target then Emapunil.
Last edited: Apr 14, 2021

https://sci-hub.se/https://doi.org/10.1021/jm8011678
4.3. Immunomodulation. The presence of TSPO in a wide range of immunomodulatory cells such as microglia, blood monocytes, lymphocytes, and leukocytes implies TSPO involvement in immune response; however, the mechanism through which this occurs is largely unknown. Macrophages express high numbers of TSPO binding sites, and in mouse studies, TSPO ligands, specifically benzodiazepines, inhibit the capacity of macrophages to produce ROS and inflammatory cytokines such as IL-1, TNFR, and IL-6. Furthermore, TSPO is involved in the regulation of phagocyte oxidative metabolism, a process that is normally required for inducing effective elimination of foreign antigens.
J

mitoMAN said:
That is why @dreamydays and @mitoMAN myself decided to also venture into Olesoxime / TRO19622 , a TSPO ligand binding at the Cholesterol binding site of TSPO and thus a different target then Emapunil.
Click to expand...
How will you know if any of this works if you are currently trialing multiple meds?

jaybee00 said:
How will you know if any of this works if you are currently trialing multiple meds?
Click to expand...
They arrive months apart. Feel free to join us tho
TSPO binding should have a rapid onset. See Ativan. You probably can't miss it.

Finally written proof that ATIVAN/lorazepam is a TSPO ligand.

The goal of our study was to examine the expression and biological relevance of TSPO in prostate cancer and show that the commonly prescribed benzodiazepine lorazepam, a ligand for TSPO, exhibits anticancer properties.

"The finding that the expression of TSPO correlates with ATP production and the upregulation of genes involved in mitochondrial respiration are consistent with our previous report using global Tspo knockout GuwiyangWurra (‘Fire Mouse’) animals.14 In the microglia from Tspo knockout mice, we observed lower ATP production and basal oxygen consumption.14 Similar findings on the role of TSPO in ATP production have been previously reported."