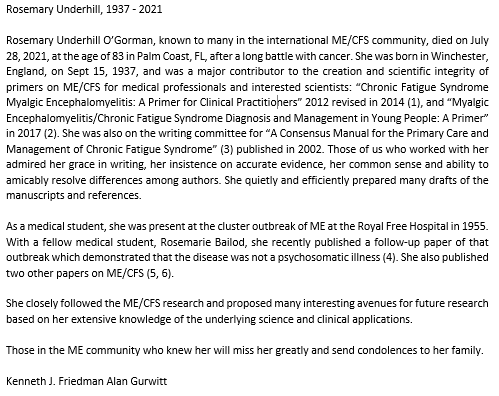 In her honor, here are some of her writings:

ME/CFS: Organic Disease or Psychosomatic Illness? A Re-Examination of the Royal Free Epidemic of 1955 (Underhill and Baillod, 2020)
https://forums.phoenixrising.me/thr...mic-of-1955-underhill-and-baillod-2020.82984/

Prevalence of Chronic Fatigue Syndrome and Chronic Fatigue Within Families of CFS Patients (Underhill, O'Gorman, 2006)
https://forums.phoenixrising.me/thr...f-chronic-fatigue-syndrome-and-chronic.10400/
(only viewable by Phoenix Rising members with more than 100 posts)

And here is her testifying before the U.S. CFSAC in 2012:

Thanks, Pyrrhus (once again!).

I listened to many of the reports above and yes, it's true that the Mass. group was one of the first to accept the CFS baton many years ago. Of course most of these people also have a diagnosis of ME.

Do you know the information the NIH is presently given concerning ME? Even though it's my belief that Medical Schools still aren't teaching about either ME/CFS/FM, the young doctors are more open to patients with it. Are there plans to begin teaching this in our Medical Schools? (If you even know.)

I tried 3 separate times to establish groups in TX. with no success except for one stalwart woman in S. Texas....a long way from Dallas. I do think the distance between places was a hindrance in our efforts. People wouldn't show up for meetings (after saying they would) and yes, one acknowledges and understands that people are ill a large part of the time. However, we did make everything as easy as possible....lunch time on Sat. so they could be driven, that type of thing. The woman in S. TX had the same problem, so we finally just gave up. I do wonder why the groups in the north and northeast are the ones that flourished, though. I gave up a long time ago to gather a group.....it was done by telephone or newsletter.

Anyway, it's good to hear that there are ongoing efforts and I applaud the people involved. Yours, Lenora.
S