I arrived at the Doctor's office a few minutes late because of bad planning on my part, so I was a little stressed to begin with. It took them about a minute to get me set up in a nice reclining chair in the "infusion room" and when Gwen took my routine vital signs (blood pressure, and pulse) she commented: "So, you're a little excited today, eh?" and smiled. Apparently my BP was a little high, but her attitude mitigated my need to ask further questions, or do my usual "journalistic interrogation."

Gwen, the nurse practitioner who actually does the infusions, calmly went over the procedure, explaining how the first couple times they were going to give me less than the full 400ml of the "drug", and work up slowly. Today's infusion was going to be 200ml, dripped at a relatively slow rate which would take 60 minutes. Gwen explained that soon I'd be up to 400ml and it would only take 30 minutes.

The cool thing was, both for protocol purposes, and because this office is very patient-centric, Gwen stayed with me in the room the whole time. I"m sure as "the new guy" they wanted to see if I'd react negatively to the drug immediately, or display any side-effects. She also mentioned that some people get quesey just with the idea of a needle going into their vein. It turns out someone did-and almost fainted! But it wasn't me. 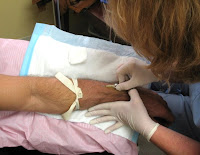 For the purpose of this blog, I had asked my precious wife to grab my camera and take a couple shots. Bad idea. She hates blood and needles, and actually had to leave the room right after the photo above was taken.

As soon as the infusion began the Doctor came in, jolly as ever, more enthusiastic than the late Chris Farley's version of a motivational speaker dropped into your living room.

"Hey guy! How ya doin' today?" the doctor beamed. But unlike the fictional "Matt Foley," this positive personality was for real, and from the heart. One of the things that prompted me to finally come to this town and start this treatment was the Doctor himself, who genuinely loves to help people, and takes time with his patients.

After chatting a while, I noticed that he was also, very subtly, checking my body out very passively for who knows what. He looked at my arm, the bottle, the drip rate, never breaking stride or stopping talking, all very calmly. But my mind started to race. "What is it he's looking for?" I thought to myself. "A rash on my skin? Blood coming out of my ears? An extra nose spontaneously growing out of my face?" When the Doctor said "OK, you're looking good. Talk to you later!" I figured that things were going as planned.

Exactly as Gwen had predicted, 60 minutes almost to the second after we started, the Ampligen bottle had been emptied into my vein. "Do you sense anything different, any side effects at all?" she asked.

"No, except I feel like sneezing" I said. "And my eyes itch."

"Well, I'll need to write that down." Gwen responded.

"Wait!" I said, remembering the last time I had given my Doctor a hug. "He has cats! I'm allergic to cats, and I just rubbed my eyes after shaking the Doctor's hand!" I said.

"Well, that's not the Ampligen" she replied, smiling. That's those felines he loves so much. Here's a tissue."

Exactly 90 minutes after arriving, my wife and I were leaving the office, me feeling no different than when I first arrived. She on the other hand, was still sort of pale looking, and said "I never want to see them sticking your vein again. I almost fainted. Sorry honey."

So after 1 treatment, I can say that so far, so good. And if the only side effect of getting this infusion is it makes my wife quesey, I can live with that!

In future or separate posts I'll include details about the first 5 weeks leading up to this day, the blood tests and paperwork and interminable waiting that is required to get Hemispherx, the maker of Ampligen, off their asses. But because I wanted this blog to be very specific about the treatment itself, I decided to start the story concurrent with the first infusion.

I arrived at the medical center this morning a little before 10:00AM with a slight headache , because of the drive, and because as a former-perfectionist, I hate to be late. My plan was to get there by 9:30AM but Baku, my cab driver from Senegal, was messing with his GPS and we didn’t take the most direct route. He was such a charming fellow I didn’t get out my map or complain. I did learn, however, that if it comes down to trusting a GPS or asking a cop on the street what is the shortest route somewhere, I’ll take the police officer’s word every time.

Gwen greeted me in her scrubs with her usual beaming smile, and in less than 2 minutes had me seated in the infusion room. Seated next to me was a wonderful woman who was just finishing her “drip” as I was arriving, who spoke so positively and eloquently about how much improvement she’d had on Ampligen, that I was finding myself feeling a strange emotion- hope!

For the purposes of confidentiality I won’t detail much about her, other than to say, timely words like this that come from other patients can really boost one’s soul and spirits. As a “rookie” just starting out, hearing her describe how far she had come, and how much of her life had been restored, was in itself like therapy! As usual in this community, in less than 5 minutes time we were “friends.”

I was discovering at that moment that my “treatment” was about more than just getting Ampligen. The whole process of moving here, committing to it, and meeting people was part of my healing as well.

I joked to Gwen after the “angel” had left: “OK, tell me the truth, do you guys plant ringers like her in here on purpose, just to boost the outlook of new patients like me?”

Gwen said, “It could seem that way, but honestly, I’ve seen the transformation in her, and what she told you is the truth.”

After noting my vital signs, Gwen then inserted the needle into my vein in about 4 seconds, adjusted the line and drip rate, and sooner than you could spell “myalgic encephalomyelitis” I was being infused.

“Yeah,” Gwen replied, “I saw the vein I wanted on your hand when you walked in, a big sucker, and I knew I just had to have it.”

“Lots of people early in their treatment find their appetite returning” Gwen remarked, as she noted that little tidbit in my chart.

Then I saw Baku in his cab, fooling with that infernal GPS again.
“Can I give you my map, Baku?” I asked, smiling.

“OK” I replied, now understanding that even “Baku” and his GPS were part of my therapy.

To follow this journey on my blog, check out "The New Ampligen Diaries" with my special thanks and appreciation to Mary Schweitzer for helping pave the way. http://ampligen-treatment.blogspot.com/
Continue reading the Original Blog Post