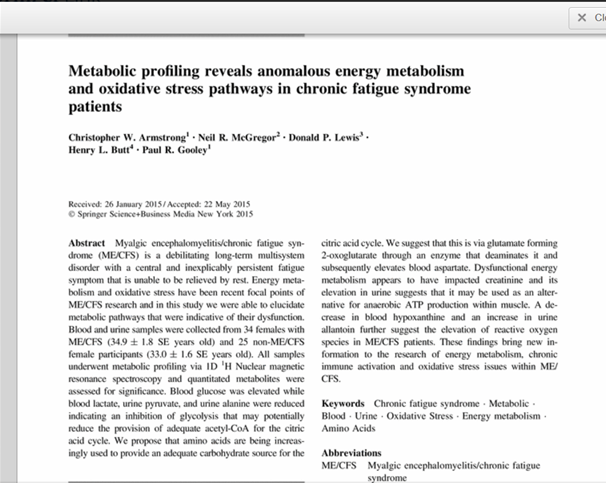 Just the abstract but I hope to be able to use research gate to access the rest...

ahhh this makes so much sense!!

JaimeS said:
Just the abstract but I hope to be able to use research gate to access the rest...
Click to expand...
I've got it. If you can't get it thru RG, pm me your email b/c it is too heavy to attach here.

It is a pity they haven't looked into oxalates, because that is the impaired pathway:

I sent you a message, @Gondwanaland ! Please email me the article! <3 <3

@JaimeS and @Gondwanaland - I'm confused. I've read that one of the central problems with CFS/ME is our low anaerobic threshold - that we all too easily go into glycolysis, instead of making energy aerobically via the citric acid cycle, that basically somehow the citric acid cycle is blocked.

But the article states: "Blood glucose was elevated while blood lactate, urine pyruvate, and urine alanine were reduced indicating an inhibition of glycolysis that may potentially reduce the provision of adequate acetyl-CoA for the citric acid cycle."

I thought we had the opposite problem - too much glycolysis, rather than an inhibition of it. (I do have trouble with chemical diagrams like the one above. I get confused by all the arrows going back and forth and can't make sense of them. I think I need a course in understanding diagrams! there must be a trick, right? )

Anyways, can either of you clear up the matter I pose above - how supposedly glycolysis is inhibited in CFS/ME, when it seems to actually predominate over the citric acid cycle, from everything I read?

@Mary, this biochem is way over my head

Some thoughts on the article, now I've had time to read it in its entirety:

The authors have read the right people and understand the nature of the illness - Maes, Carruthers, etc. I like that they say that the etiological mechanism has "predisposing, triggering, and maintaining factors".

The study involves 34 females with ME/CFS (34.9+/- 1.6 SE y.o.) and 25 non-ME/CFS females (33.0 +/- SE y.o.). Other participants were ruled out, including male patients with ME/CFS (sorry guys!) and people who were outliers age-wise. The dx criteria used was the Canadian Consensus; the non-ME/CFS patients were examined and it was determined they were not suffering from any major illness.

I find this part especially interesting. I'm not surprised glucose is increased rather than decreased; I think based off of a few experiences that my blood sugar is off. I'd really have to look at the others, though. I've heard of xanthine, but not hypoxanthine (puts on research hat).

In urine rather than blood, all absolute concentration metabolites were found to be decreased in ME/CFS: acetate, alanine, formate, pyruvate and serine. Those plus valine were decreased in the relative concentrations - although there was increased allantoin and creatinine.

I find the latter fascinating. I know allantoin in the context of plants; it's a wound-healer present in comfrey plants, though in this context it's a purine product of uric acid? And I think we have all had our fill regarding what creatinine does.

The altered amino acid concentrations appear to be connected to those important to the citric acid cycle; and other metabolites appear to point to disordered glycolysis.

So... we have trouble processing carbs? Huh. Also not terribly shocking.

The article then makes a particular point of how, only in the ME/CFS cohort did glycolysis products go down while amino acid waste went up, implying lower rate of glycolysis and a higher rate of the Krebs (Citric Acid) cycle, instead. In the healthy patients, these values did not directly correlate positively OR negatively.

The authors go on to then postulate that ME/CFS patients have a depletion of non-essential amino acids because they're being used to push the Krebs Cycle...

@Gondwanaland, then they DO go into the oxalate cycle...

THEN THE RESEARCHERS INCLUDED the energy cycle diagrams for glycolysis, and the Citric Acid Cycle, and urea cycle - because they are just that awesome.

(will be continued in a bit, guys).... (and sorry all the pretty (copyrighted) images disappeared!)

I am so, so sorry I had to remove this beautiful interplay of the Citric Acid Cycle and glycolysis and... but as I said, someone worked really hard on that image, and so... and so they probably wouldn't want it stolen... even For Science.

Creatinine (which is increased for us) is negatively correlated to glycine, which is its biological predecessor molecule, implying it's over-produced in us. Glucose and creatinine are directly proportional, so ME/CFS patients who had high creatinine also had higher glucose. Again, this implies issues with glycolysis.

However, in healthy controls, creatinine is inversely proportional to: glucose, lactate, pyruvate, serine, citrate, and succinate.

Then, the article kindly takes a break to remind you of all that's gone on so far, because it's a lot:

Actually, I feel this is a lot more comprehensible the second time around; at least to me...
Last edited: Jun 2, 2015

I find it pretty interesting that they say that elevated blood sugar levels have been found several times in other studies about ME or CFS, but the results have always been deemed not of value or the numbers didn't reach significance. This study lists four others that have noted increased blood sugar.

On a personal note, I was talking with my stepmother who is a diabetes nurse, and she said, "it really sounds like you have reactive hypoglycemia". She said perhaps my blood sugar is a bit high all the time, and that sometimes my body 'overreacts' by producing too much insulin if I eat something super-sugary. So. Interesting.

The study notes that the increase in blood glucose could be either reduced uptake, upregulated production, or issues with glycolysis (the breaking down of glucose that is so important to energy levels.) Their data supports that there could be decreased numbers of mitochondria, insulin resistance issues, AND glycolysis issues.

Mary said:
I've read that one of the central problems with CFS/ME is our low anaerobic threshold - that we all too easily go into glycolysis, instead of making energy aerobically via the citric acid cycle, that basically somehow the citric acid cycle is blocked.
Click to expand...
Mary - their hypothesis appears to be that it's the other way around.

JaimeS said:
Mary - their hypothesis appears to be that it's the other way around.

-J
Click to expand...
This study is confusing and interesting all at once! I don't have the scientific background to really understand it, I just have broad concepts which seemed to be turned on their head here ---

One thing which is very interesting to me is that my blood sugar is always borderline high - it used to be almost 100, now it's down to about 93. I eat almost no sugar or white carbs, am very very strict with my diet. So this may explain why --- whereas my sister who ate all the sugar she wanted had great blood sugar numbers.

Gondwanaland said:
@Mary, this biochem is way over my head
Click to expand...
Ditto!

Apologies if you've explained this already and I didn't catch it.

Give me a minute to articulate though, @SOC and @Mary... I think I may need to 'sleep on it' to see if it really makes sense or if it's wishful, simplistic thinking.

@JaimeS, anything you can tell me will be greatly appreciated.

I refused to study any more biology after they made me dissect a recently living frog in 8th grade. Physics, yes. Chemistry, yes. Biology, not over my dead body. Somehow I had this silly hope I could get through my life without another biology class. I've picked up the basics over the years, but that's about it.

Then ME came along and I had to learn all kinds of things I hoped I would never need to know. Sigh...

This is incredibly interesting. I used to love biochemistry but the brain fog obscures it so, and cellular respiration is astonishingly complicated even without brain fog . .. thank heavens you're on the case, @JaimeS!

I hope you're resting/sleeping on it now, but when you're slept, I'll throw this into the pot: any ideas how what this might suggest for a ketogenic diet? I'm tangled now.

The paper seems to suggest that the use of glucose is impaired (+1 for ketosis as an alternative), but I can't put it all together. Maybe with some sleep . . .

Do they comment at all on plasma Alanine? A doctor I see has done amino acid panels, and this has been elevated on occasion. I have never gotten an explanation as to why.