Link Between CCI and the Markov CBIS bacterial dysbiosis theory of ME/CFS?

Dr Igor Markov in the Ukraine say he has found the cause and the cure of ME/CFS: he believes ME/CFS is due to a chronic bacterial dysbiosis in the kidneys, and sometimes also in the nasopharynx (the nasopharynx is an area located just above the back of the throat).

Dr Markov treats these bacterial dysbioses with autovaccines (autogenous vaccines) which target and kill the bacteria, and says autovaccine therapy completely cures ME/CFS in 93% of cases.

A post summarizing the Markov theory of ME/CFS is HERE.
A Markov discussion thread is HERE.

Anyway, I was thinking that these same bacterial dysbioses that Dr Markov finds in ME/CFS could also be the cause of craniocervical instability (CCI).

Bacteria not only release bacterial toxins, but can also secrete connective tissue-destroying matrix metalloproteinase (MMP) enzymes like elastase and collagenase. In addition, the immune system when it fights bacteria will also release MMPs, which unfortunately destroy connective tissues as collateral damage.

So given that the nasopharynx is right next to the area where the weakened connective tissue (ligaments) of craniocervical instability are found, could the constant release of bacterial toxins and MMP enzymes from this nasopharynx bacterial dysbiosis be the cause of CCI in ME/CFS patients?

The ligaments of the craniocervical junction are found weakened and lax in CCI patients, and this weakness is due to the connective tissue of the ligaments being damaged.

The Nasopharynx is Located Right Next to the Craniocervical Instability Area 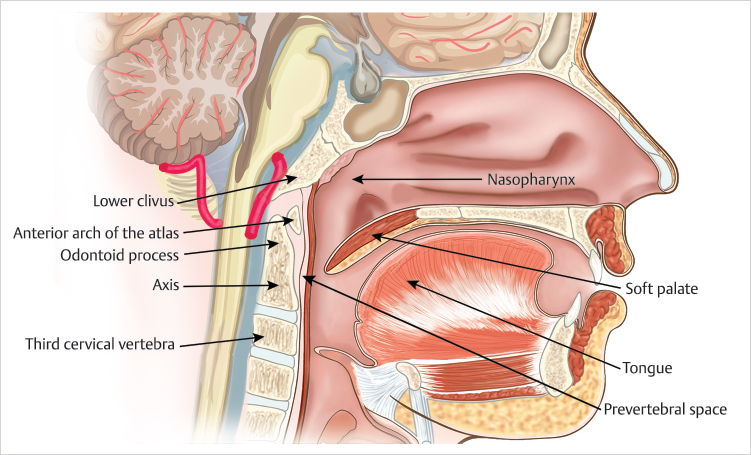 When I tested my own urine for bacteria, and when I was tested by the Markov Clinic bacteriology department, it became apparent that I had three bacteria in my urine, including Klebsiella pneumoniae.

I then tested some nasal mucus that I obtained by blowing my nose, and this was also positive for Klebsiella pneumoniae.

So this indicates a the presence of bacteria in my nose or nasopharynx.

I use chromogenic agar to help identify bacterial pathogens. Agar is a nutrient medium on which bacteria can be grown, and chromogenic agar is a special type of agar which turns different colors depending on what species of bacteria is growing on it.

So when I placed some nasal mucus on my chromogenic agar, some bacterial colonies grew, and the color suggested Klebsiella pneumoniae.

If a local nasopharynx bacterial dysbiosis is causing the CCI, possibly even simple treatments like Dr Joseph Brewer's and Dr Ritchie Shoemaker's antimicrobial nasal sprays might be beneficial.

In both cases, these nasal sprays contain a biofilm buster (EDTA) which can break down the biofilms of any pathogen. It is the biofilms which allow a pathogen to create a chronic dysbiotic overpopulation. You can also make your own biofilm busting nasal spray just by using a 1% N-acetyl cysteine (NAC) solution.

However, it may be that the bacterial dysbiosis in the kidneys is also releasing MMP enzymes into the bloodstream, so in addition to a nasopharynx dysbiosis, this kidney dysbiosis could be a further contributory factor to CCI.

According to Dr Markov's published study on more than 4000 of his ME/CFS patients, the autovaccine approach to treating these bacterial dysbioses in the kidneys and nasopharynx is 93% successful in completely curing ME/CFS (curing meaning back to normal health with no further ME/CFS symptoms, and no further treatment required).
Last edited: Dec 13, 2021

Hi @Hip -- Excellent post. Here's a couple of "data points" that I think are relevant.

My wife had very challenging neck problems for many years (much better now). She said that when she would go out to eat, and have her favorite dessert afterwards (cheesecake), it was almost guaranteed her neck was going to go out, and would necessitate another visit to her chiropractor. Who knows what was all involved, but it would seem that certain foods can weaken ligaments, perhaps by the mechanism you outline.

Secondly, I had very good results from getting an AtlasPROfilax repositioning done many years ago, and was with my sister and nephew when they had it done as well. On the way home from having their's done, they were both commenting on how much clearer their sinuses were. Which to me suggests a correlation between cranial instability and the whole sinus area(s). I just posted a link on another thread, which suggests a correlation between CI and our whole vestibular system. I've often thought that some ME/CFS symptoms are caused by vestibular issues. Here's the link:

Could possibly be other connections as well, maybe the kidney dysbiosis is dropping toxins on e.g the gut as well causing leaky gut.

Such a great finding! We should get more people attempting the autovaccines asap, as this is something to take quite a bit

After I completely resolved the really quite severe cranial cervical swelling I experienced probably for 2 years after worsening of my ME. I have to say I do think this was caused by a virus inflaming tissues locally to that area and then that created not only stiffness and swelling but I would assume degradation of ligaments in that area. The difference being I can look straight up now at the ceiling/sky without becoming severely dizzy and disorientated. Also the swelling in the cranial cervical joint area vanished after a few months on the protocol. It's never come back.

So I agree with you, I think it makes sense that the cranial cervical syndromes could be caused by viruses in this area.

In my case I never really had any issues in the nasal/sinus area. I guess you could say it was all localised to the neck area and spinal region directly underneath the skull - inc occipital lymph node swelling which would stretch the skin in that area. Also with audio visual stimulus, say at a social gathering, symptoms would worsen within minutes and after 10 or 20 minutes my whole head would be quite badly swollen.

I guess it's not clear if the issues in the neck could be caused by viruses or bacterial infections. But I'm glad I managed to get rid of this symptom.
T

It's an interesting idea as one of many people's (including mine) first symptoms is a problem in the TMJ area, which is very close to the location you mention.

Interesting. Are these vaccines something we can get hold of?

godlovesatrier said:
After I completely resolved the really quite severe cranial cervical swelling I experienced probably for 2 years after worsening of my ME
Click to expand...
@godlovesatrier How did you resolve this?