Background: There is growing evidence that the kynurenine pathway is involved in the pathology of diseases related to the central nervous system (CNS), because of the neuroprotective or neurotoxic properties of certain metabolites, yet the role of each metabolite is not clear. The pathology of Chronic Fatigue Syndrome (CFS) and Fibromyalgia (FM) is currently under investigation, and the overlapping symptoms such as depression suggest that the CNS may be involved. These symptoms may be driven by enhanced neurotoxicity and/or diminished neuroprotection. However, the kynurenine metabolite status has not been well studied in these two possible related disorders of CFS and FM. The objective of this study was to investigate the metabolites and ratios of the kynurenine pathway in CFS and FM compared to healthy controls and examine the possible correlations with symptoms of anxiety and depression.

Conclusion: Our study indicates associations between kynurenine metabolism and CFS and FM as well as characteristic symptoms like fatigue and pain. Forthcoming studies indicating a causative effect may place kynurenine metabolites as a target for treatment as well as prevention of these conditions in the future.
Click to expand...

Here is an overview of the kynurenine pathway: 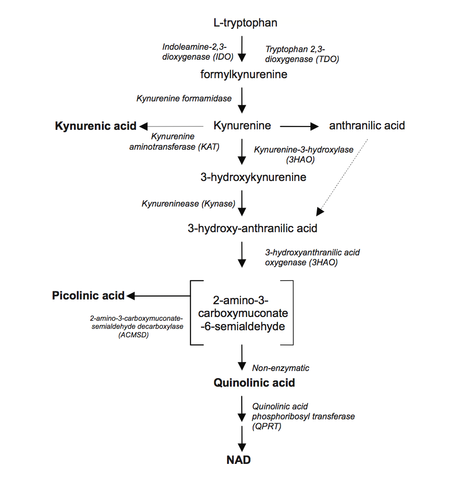 This study doesn't confirm the IDO trap in any way. The authors seem to be a bit overselective with sharing their raw data and only share ratios for the KA results.

Thanks for sharing this interesting study!

It does fit my observations, in that I believed that my QA level was abnormally high in relation to the other kynurenines.

They paid attention to nicotine usage. I wonder if nicotine affects the catabolism of QA (which gets converted to nicotinic acid). If extra nicotine reduces the amount of QA catabolized, that leaves an excess to be neurotoxic.

I see they analyzed blood plasma. Is it possible that this would differ from urine KA and QA levels? Because: