Boswellia for lungs and MC stabllizing

How to do? Tie off a limb, then lift with light weights. E.g., tie surgical tubing around the upper arm and then do bicep curls.

Why? It's typically used with debilitated people (e.g.: elderly, burn patients), who can thereby get benefit similar to using normal/heavier weight.

Dangerous? You bet. The creator of it even once gave himself a blood clot which became a Pulmonary Embolism.

Any surprising mysteries? Yes, e.g. tying off the upper arm gives benefit in the chest muscle.


Kaatsu is probably the last thing that people here would want to actually do. But musing about it might provide some insights into CFS and PEM. It's not known why Kaatsu works. Maybe it's from building up waste products as if the exercise was heavier. Maybe it's from hypoxia, or maybe from blood pooling.

I would be very careful trying anything that could potentially cause a blood clot, those can often be fatal and sometimes very hard to catch (based on symptoms) before it gets to that point.

Boswellia for lungs and MC stabllizing

Finally, there is a Kaatsu-like approach used in studying CFS, and of course the purpose is to study the effects of exercise metabolites in muscle:

http://news.ufl.edu/archive/2015/03...on-for-chronic-fatigue-syndrome-patients.html
Study shows why exercise magnifies exhaustion for cfs patients
(Thanks @Aurator for posting that.)

to first measure their maximum grip strength. Then they squeezed that same grip device at 50% of their maximum grip strength and held steady like that for as long as they could. On one arm, a blood pressure cuff was inflated immediately after the exercise to restrict blood flow and trap the exercise metabolites - which includes but is not limited to lactic acid and other acids. On the other arm, no blood flow restriction was used.

From the underlying abstract:
Evidence for Sensitized Fatigue Pathways in Patients with Chronic Fatigue Syndrome.
http://www.ncbi.nlm.nih.gov/pubmed/25659069

Repeated fatigue and pain ratings were obtained before and after exercise...Whereas fatigue ratings of CFS subjects increased from 4.8... to 5.6... during forearm occlusion, they decreased from 5.0... to 4.8... during the control condition without occlusion...

A similar time course of fatigue ratings was observed in NC (p>.05) although their ratings were significantly lower than those of CFS subjects
Click to expand...
That's not exactly earth shattering, but (from the article):

“What we have shown now, that has never been shown before in humans, is that muscle metabolites can induce fatigue in healthy people as well as patients who already have fatigue,” said Dr. Roland Staud, a professor of rheumatology and clinical immunology in the UF College of Medicine and the paper’s lead author.
Click to expand...
They also demonstrated increased pain, which follows up on Alan Light's work showing increased expression at post workout (PWO) of pain receptor RNA in CFSers. Light also talks about acid muscle metabolites. 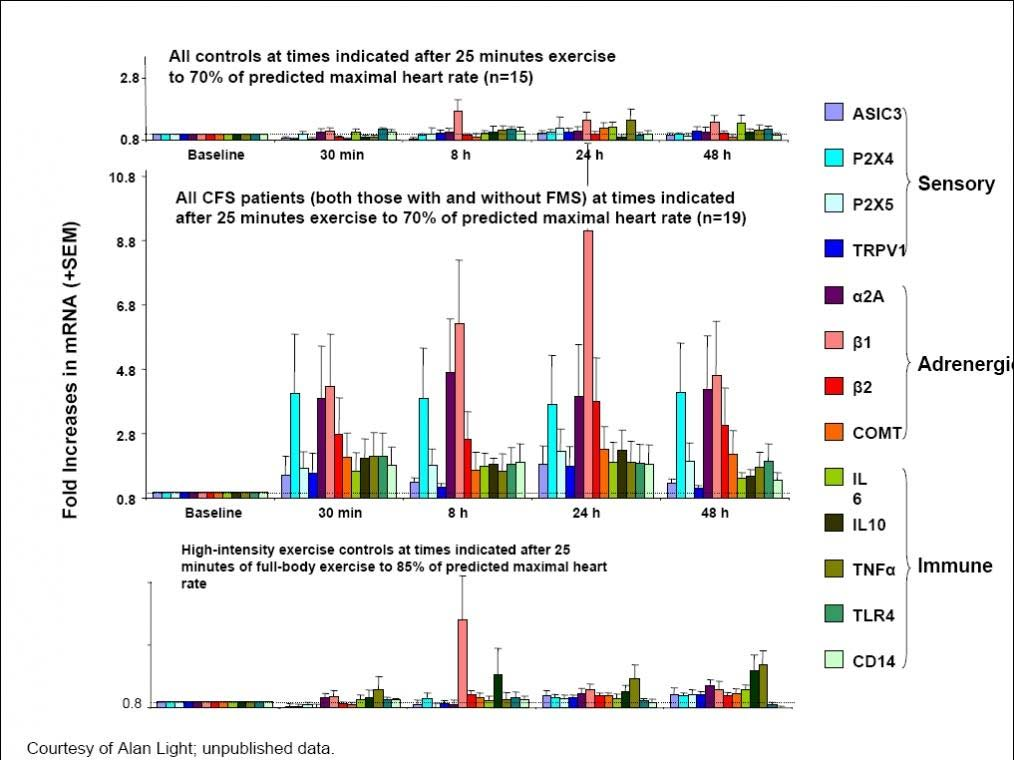 Finally, and again from the article:

Next, Staud plans to explore treatment interventions and to conduct brain-imaging studies of patients with SEID.
Click to expand...
As an easy guess: for interventions read baking soda, or something very similar - which I myself felt compelled to rave about almost two years ago:
http://forums.phoenixrising.me/index.php?entries/long-bike-ride-today-like-old-times.1412/

and is what I'd call the main element in this more recent and very long thread about reducing PEM:
http://forums.phoenixrising.me/inde...a-sam-e-catalase-no-pem-after-exercise.34446/

Btw, after a while the baking soda still seemed useful to me but not quite so rave-able - maybe because I'd adapted more to hard endurance exercise and didn't need it quite as much anymore. Knock on wood
Last edited: Mar 12, 2015
You must log in or register to reply here.
Share: Facebook Twitter Reddit Pinterest Tumblr WhatsApp Email Link