Is there a way to negate the negative mitochondrial effects of antivirals?

I'm due to start Acyclovir and from researching it seems most antivirals cause some degree of Mitochondrial Toxicity. Is there a way to avoid or negate these toxicity side effects?

From this table there's a host of effects from Acyclovir:

I'm already taking 100mg of CoQ10, 1mg D-Ribose and ENADA. Is there anything else that would help?

But your table also lists acyclovir, which is not known to cause significant mitochondrial toxicity at the established doses. There may be a theoretical risk of mitochondrial toxicity, but thanks to its very short half-life, it probably don't have much time to cause non-reversible damage. (Mitochondria can typically recover from minor, short-term damage.) Perhaps at much higher doses with more frequent dosing, you might see some significant toxicity from acyclovir.

But it probably couldn't hurt to use some mitochondrial support nutrients, such as B vitamins or glutathione precursors.

I hope this helps.

One thing that helped me feel better about valacyclovir when I started taking it 11 months ago was learning that valacyclovir and acyclovir are only metabolized into their active component in the presence of a viral enzyme called thymidine kinase.

https://www.uptodate.com/contents/acyclovir-an-overview
"After intracellular uptake, it is converted to acyclovir monophosphate by virally-encoded thymidine kinase. This step does not occur to any significant degree in uninfected cells and thereby lends specificity to the drug's activity. "

This selectivity of acyclovir is what gives it a relatively low side-effect and safety profile compared to many other antivirals. In the table in your post, the references in column four for "Mitochondrial Effects" mostly don't apply to acyclovir. The two references that do apply (132 and 134) either used the pre-activated triphosphate form of acyclovir applied to cells or applied acyclovir to cells along with the viral enzyme thymidine kinase.

Anyhow, all that being said, theoretically, it is still possible some virally activated acyclovir-monophosphate or acyclovir-triphosphate could mess with cellular transcription in virally infected cells. Not sure if it would be enough for long-lasting damage.

Shanti1 said:
One thing that helped me feel better about valacyclovir when I started taking it 11 months ago was learning that valacyclovir and acyclovir are only metabolized into their active component in the presence of a viral enzyme called thymidine kinase.

https://www.uptodate.com/contents/acyclovir-an-overview
Click to expand...
Thanks so much, @Shanti1 for explaining this excellent point.

For you visual learners out there, here are two diagrams: 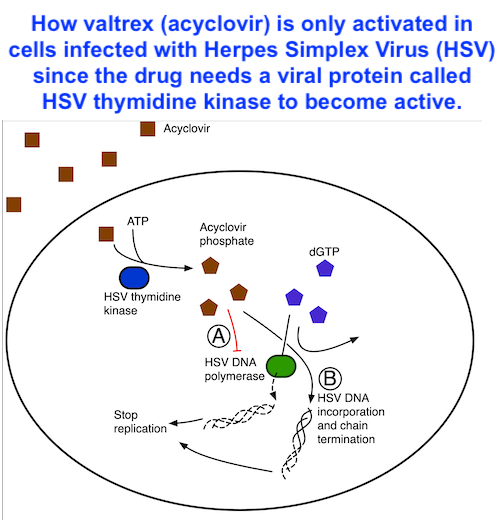 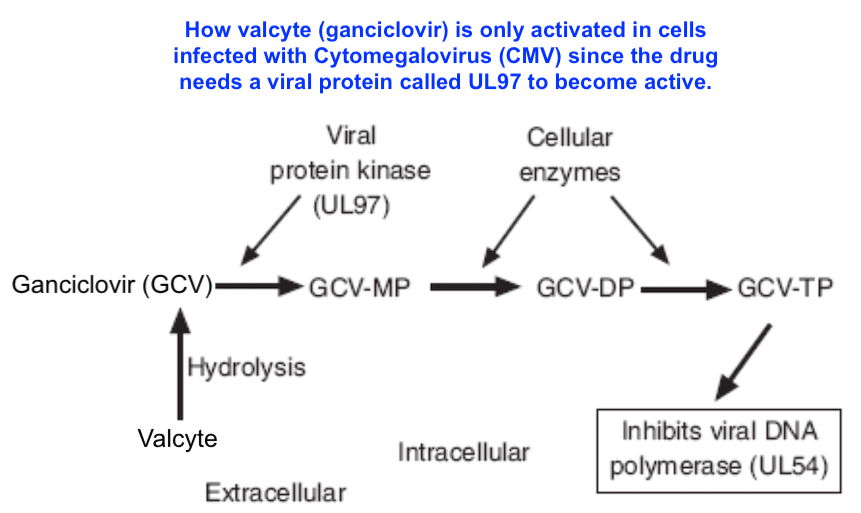 ​
P.S.
It is important to note that ganciclovir can also by activated by the HSV thymidine kinase, which is why valcyte (ganciclovir) is also effective against HSV. For more information about which direct-acting antivirals (DAAs) might be effective against herpesviruses such as HSV, CMV, EBV, VZV, or HHV6 see this discussion: