Irish Times: “ME: ‘I spend 20 hours a day lying down. I have four upright hours in the day’”

ME: ‘I spend 20 hours a day lying down. I have four upright hours in the day’

Myalgic encephalomyelitis sufferers live with a range of conditions some have described as being ‘buried alive’ or as a ‘living death’
https://www.irishtimes.com/health/your-wellness/2022/10/11/me-i-spend-20-hours-a-day-lying-down-i-have-four-upright-hours-in-the-day/

Great! We need a lot of media exposure.
It would be such a relief if people knew what this disease really is. No more explaining needed.
T

I lived in the U.S. (have both American & UK ties) and was both affected and helped to start groups for people who had the same illness. Unfortunately for us this was exactly at the time of the AIDS epidemic. I always felt a kinship with this group b/c I assumed I had AIDS b/c of a blood transfusion during surgery. We had no Internet at that time.

I think one of the major things that worked against us in addition to AIDS was the term "Yuppie Flu" and a real hatchet piece that Time Magazine did on anyone who claimed to be fatigued. It was unkind and to this day, the damage is real. I'm greatly in favor of the way the AIDS group fought their difficult battle....I just wish it hadn't been at the same time.

I've lived with this for a very long time....and have gone through many different stages. I used to have huge lumps (swollen lymph nodes) under my neck....they disappeared within the last 5 years and no, I don't know when. I now have a constant sore throat which can limit my talking if bad enough. I can't talk on the telephone after 3-4:00 p.m. My family and close friends know and respect it....an emergency call is a different thing.

I used to be part of organizations that were done by phone and newsletter only, then when the computer age came, this information and groups became available worldwide. Unfortunately my telephone no. became known and I received calls at all hours from around the world. Today I'm on nothing....social media, anything to protect my identity (phone no.) I no longer volunteer like I had from the beginning.

Still, I understood the thirst for knowledge, especially close at hand, and groups were finally started worldwide. Research has been ongoing since the beginning, but we were really hoping for the research from AIDS and MS to filter down to us....it never did, at least to my knowledge.

More people than ever admit to having the illness, there is more research going on although $ are always needed and yes, there are many different theories. I think most will be proven to be valid. It's not just a virus, but many things are added to it.

In my case surgeries and contracting two viruses probably awakened an old viral infection in my system. Who knows if the infections were the same? At least I had a doctor and a PT who believed me....that was unknown at the time. As a matter of fact, my neurologist joined me in helping with articles, attending conferences, etc. A good man now gone.

Today, at age 75 I have many problems and agree with the woman who stated that she and her husband are now their own doctors. Because of the loss of my very empathetic neurologist the only drugs I'll be given are prescribed by my longtime internist....not exactly a young chick herself.

At my age I put a lot of the new additions down to old age....and many probably are. I can no longer go to restaurants (for lunch), most of my friends have been widowed and are dying at a faster rate each year. I do have contact with many people and a wonderful family.

We visit in my home (Rod & I have been married for 56 yrs.) so that I can scurry off to our bedroom for a rest when needed. Many holiday meals are missed even if they're here. I have so many diagnoses that even I can't remember most of them any longer. Pain is a constant and I now treat it with ice packs by Ace at its worst.

I do believe that heavy exercise is very bad for us. You may notice it on here even. So many use things like weights and end up in even worse condition. I understand the need for movement....thus gentle walking is possibly the way to go. Just go past one or two houses and return home in the beginning. Don't overdo it.....is it worth it?

I'm fortunate that my husband has been my strongest ally throughout all of this. I gave up my job, the career I had planned and just about managed to raise two fine teenage girls (at the time). Both had problems, but it was understood that their well-being was of greatest importance. Today, both are married, fine mothers and have great careers (see...if one lives long enough!).

I thank Tom Kindlon and all of the fine people who brought this article to us. People don't understand the difficulties faced by both caretakers and sufferers of this illness. Volunteers are also under great pressure and burn out can be a problem. Be kind to those who try to help. There are many orphan diseases out there....and researchers realize we have to share information. A caveat though: Please don't read and believe everything written....things take a long time to prove.

May all of you have more good days than bad....and may a cure be found for all of you. Yours, Lenora
T

Thanks @Tom Kindlon - another really good article! Four hours sounds kind of amazing, which just goes to show the situation many of us are in.
T

Thanks to everyone who shared and/or read the Irish Times article, "ME: ‘I spend 20 hours a day lying down. I have four upright hours in the day’". https://www.irishtimes.com/health/y...ng-down-i-have-four-upright-hours-in-the-day/

It is now at number 7 (see:https://www.irishtimes.com/most-read/ ) so some random people will still be coming across it because of that 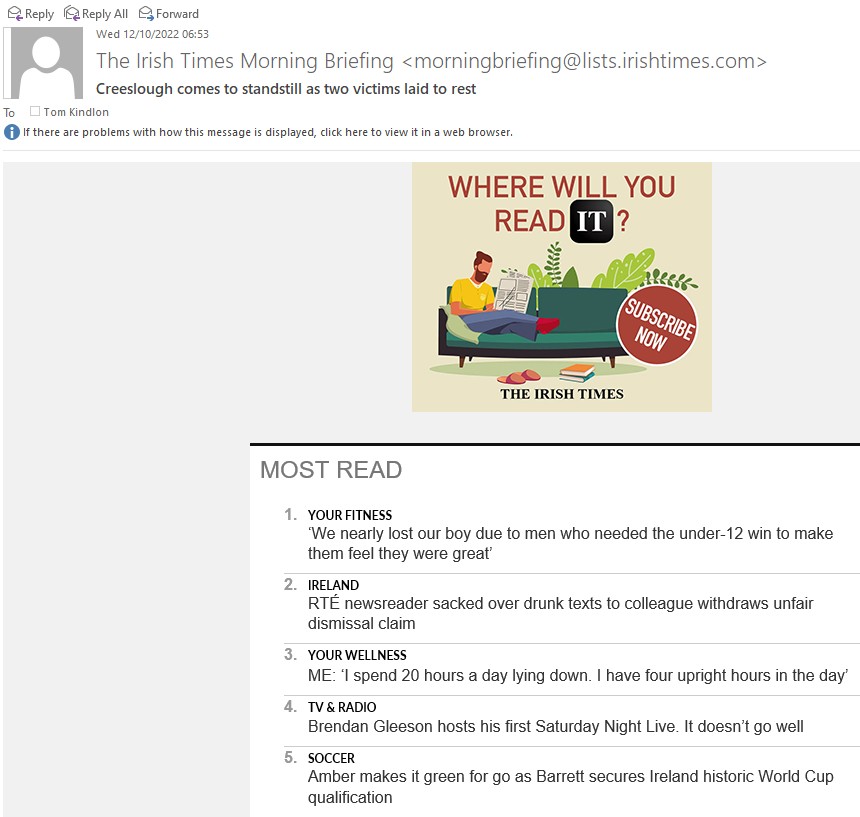 The silence from world leaders today in response to the WHO's call to urgently act says it all. The countless media coverage and here we are with so little being done.
T

I was also photographed lying down outside. The photographer thought it looked quite striking with the sea in the background and he was sure the photo would be used. Perhaps because of the photo of the woman lying down that image wasn't used.
You must log in or register to reply here.
Share: Facebook Twitter Reddit Pinterest Tumblr WhatsApp Email Link