Lately, I've been dealing with dizziness and low blood pressure, salt and caffeine have helped in the past, however it seems as if caffeine really just burns me out more than anything at this point.

I have been responding reasonably well with L-tyrosine, although I'm still experiencing symptoms of low catecholamine levels which is why I'm interested in trying mucuna pruriens. I'm starting to wonder if I'm having a difficult time converting it into l-dopa or if my absorption is just poor in general.

The only thing about it that I find dismaying is that it apparently can shut down your dopamine receptors if you take too much, and that's honestly the last thing I need.

Has anyone here had any reasonable experience with it? Have they been able to use it and/or cycle off of it without feeling like total crap?

Any guidance in this matter would be greatly appreciated.

Yep cycle it as i thinks its more a tolerance issue . No more than 2 days in a row and 2 off i found. But a side effect i found was i sweated alot.

Apparently it is extremely difficult to get in Canada and it is regulated for prescription-use only.

Thanks for the info about the mucuna btw, I'm still pretty reticent to use it.

I think I would do way better on L-DOPS, but with all the shills in our government pushing for serotonergic drugs to be used as a panacea for everything, I doubt I could get my hands on that.
Last edited: Jan 3, 2016

But I Look So Good.

I used it for a few days. did nothing for me.

Macuna puriens is in one of the supplements I take for mood. I use 1/2 dose of NeuroScience's Balance D:

I wanted to bump my tyrosine up just a bit from what I get in supplements, so I got powder and take 1/64 of a tsp. I use tiny measuring spoons I found on Amazon:

I have been taking small amounts for the last few days. I had no problems getting it here in Canada though I can't remember if I ordered it on I herb or bought it at a store. Haven't noticed any changes.

Will do as heaps suggests. Thanks for that.

But I Look So Good.

Look into www.powdercity.com. Don't know if they ship there.

@Chriswolf
If you are looking to boost your dopaminergic system, then the following drugs and supplements can do this:

Deprenyl — a selective irreversible MAO-B inhibitor, which inhibits the breakdown of dopamine. Also called selegiline. Increases the sickness behavior inflammatory cytokines IL-1beta and IL-6, 1 so may not be advisable for ME/CFS.

Moclobemide — a selective irreversible MAO-A inhibitor, which inhibits the breakdown of dopamine. Moclobemide is one of the safer antidepressants: in one study, moclobemide was shown to have one of the lowest incidences of sexual dysfunction, a side effect common with antidepressants, especially SSRIs.

Memantine — dopamine D2 agonist (as well as an NMDA blocker).

Pramipexole (Mirapexin) — an agonist for the D2, D3 and D4 dopamine receptors, but strongest agonism is on D3.

Ropinirole — acts as a D2, D3 and D4 dopamine receptor agonist with highest affinity for D2.

Tianeptine (Stablon) — increases dopamine levels in the nucleus accumbens (a part of the brain involved with motivation and reward). Ref: 1

Amfonelic acid — research chemical with highly selective dopaminergic stimulant and antibiotic properties which may also function as a nootropic. It is a NDRI.

Spanish saffron (Crocus sativus) — increases dopamine (and glutamate) levels in the brain. Ref: 1 Several studies have found saffron to be as effective as pharmaceutical antidepressants.

Curcumin — a MAO-A and MAO- B inhibitor, increases levels of dopamine and serotonin. Increases BDNF. Ref: 1

Apomorphine (Apokyn, Ixense, Spontane, Uprima) — is a non-selective dopamine agonist which activates both D1-like and D2-like receptors, with some preference for the latter subtypes. Apomorphine is given by subcutaneous injection or infusion. Also by sublingual tablets. Half-life = 40 minutes.

Apomorphine uses: originally a treatment of homosexuality in the early 20th century. More recently used for treating erectile dysfunction, and in the treatment of Parkinson's disease. Apomorphine is a potent emetic (induces vomiting) and should not be administered without an antiemetic such as domperidone. Ixense (aka: Uprima) = 3 mg sublingual tablet of apomorphine (as hydrochloride). Each tablet contains 3 mg of apomorphine.

Pramipexole is a dopamine D2 autoreceptor agonist, and thereby reduces the extracellular concentrations of dopamine. Ref: 1.

Uridine — a supplement that promotes the creation of new dopamine receptors in the brain, an effect which is more pronounced in brains with fewer dopamine receptors (this is done by activating the D1 and D2 receptor signaling cascade, which stabilizes spikes of dopamine activity that would normally “burn out” receptors and reduce their effective number). Ref: 1 People notice an increase in general motivation. Your capacity to learn and retain information is noticeably better. Best taken with DHA, choline and B vitamins. Uridine + DHA may partially restore dopaminergic neurotransmission in model of Parkinson’s. Ref: 1

Sulbutiamine increases the density of D1 dopamine receptors, when given to rats at a dose of 12.5mg/kg daily (which corresponds to an oral human dose of around 170 mg daily). Ref: 1

Centrophenoxine proposed to cause an increase in density of dopamine receptors. Ref: 1

Thank you very much for the information, I will look further in to it.

I'm not sure whether I simply need to get my norepinephrine levels up or my dopamine.

@Hip Great stuff! You're indefatigable. Maybe you have I-ME?

BTW, I had bought some Risperidone and Amilsulpride late last year from memory of one of your posts.
The script on the AM box is Baltic and I didn't realize low dose best at the time. 'Turns out they are 400mg!
I'm glad I rechecked today before starting it at 25mg. I cut them it 1/8's, and again as best I could as any further cut caused powdering:&. (Good brand though, Solian by Sanofi, i.e. Big pharma.) 'Appreciate your work. Thanks.
Last edited: Nov 26, 2016
K

@Hip and others, thanks for this. any recommendations on reliable online pharmacys/shops to get these and/or brands advised for the saffron?

I buy saffron from a particular supplier on the UK eBay.

@Hip do you find the saffron gives you glutamate anxiety problems? I may try it but don't do too well with excess glutamate. Can't take glutamine because of that. What do you think of rhodiola for helping dopamine and serotonin? It's supposedly Mao & comt inhibitor? Sometimes I take it I feel more motivated and better mood then other times I feel more grumpy and low. Only take 6 drops of a tincture. Have tried so many things for dopamine. Tyrosine makes me angry and irritable!! Mucana prueins makes me more anxious!!! DLPA worked fantastically the first time. Then didn't do much after that!! I sometimes wonder if it's because I am lacking in Co factors such as iron,b6 etc. My neurotransmitter test showed low NE and DDopamine. Why do I have such a shody brain!!

Doses of around 100 mg of Spanish saffron I don't find cause glutamate problems (like increased anxiety), but have noticeable antidepressant effects. This is one of my regular antidepressants that I take on days when depression hits. Higher doses start to increase anxiety very slightly.

Rhodiola rosea increases IL-10, which may make it harder for the body to clear viruses, so this supplement may be best avoided in virus-associated ME/CFS.

Thanks @Hip I may try the saffron. The amisulpride sounds really good but I probably wouldn't tolerate it. Since cfs I've tried 12 anti depressants and all made me feel physically worse. Even just 10mg of prozac. Before cfs I was on seroxat for 10 years.

@Hip sorry me again! Do you get saffron which has 'whole ground stigmas' or 'extract standardised to 2% safranal'. ? Thank you

wiltedflower77 said:
Thanks @Hip I may try the saffron. The amisulpride sounds really good but I probably wouldn't tolerate it. Since cfs I've tried 12 anti depressants and all made me feel physically worse. Even just 10mg of prozac. Before cfs I was on seroxat for 10 years.
Click to expand...
I have had terrible reactions to the SSRI citalopram: just one pill dramatically increased my depression levels. However, very low dose amisulpride I seem to tolerate very well, and it feels more like taking an supplement than a drug, in terms of how "clean" it feels in the body.

I buy Spanish saffron stamens from the seller "fairlovely" on the UK eBay (cost is around £10 for 4 grams). This appears to be a genuine product, as it checks out on the saffron test. I then weigh the saffron on my digital scales (which are accurate to 1 mg) in order to get a dose of 100 mg.

Thankyou @Hip I am just going to pm you I hope that's ok.

Hip said:
@Chriswolf
If you are looking to boost your dopaminergic system, then the following drugs and supplements can do this:

Moclobemide — a selective irreversible MAO-A inhibitor, which inhibits the breakdown of dopamine.

Memantine — dopamine D2 agonist (as well as an NMDA blocker).
Click to expand...
Memantine was also tested to threat Bipolar Disorder, with some mitigate effects 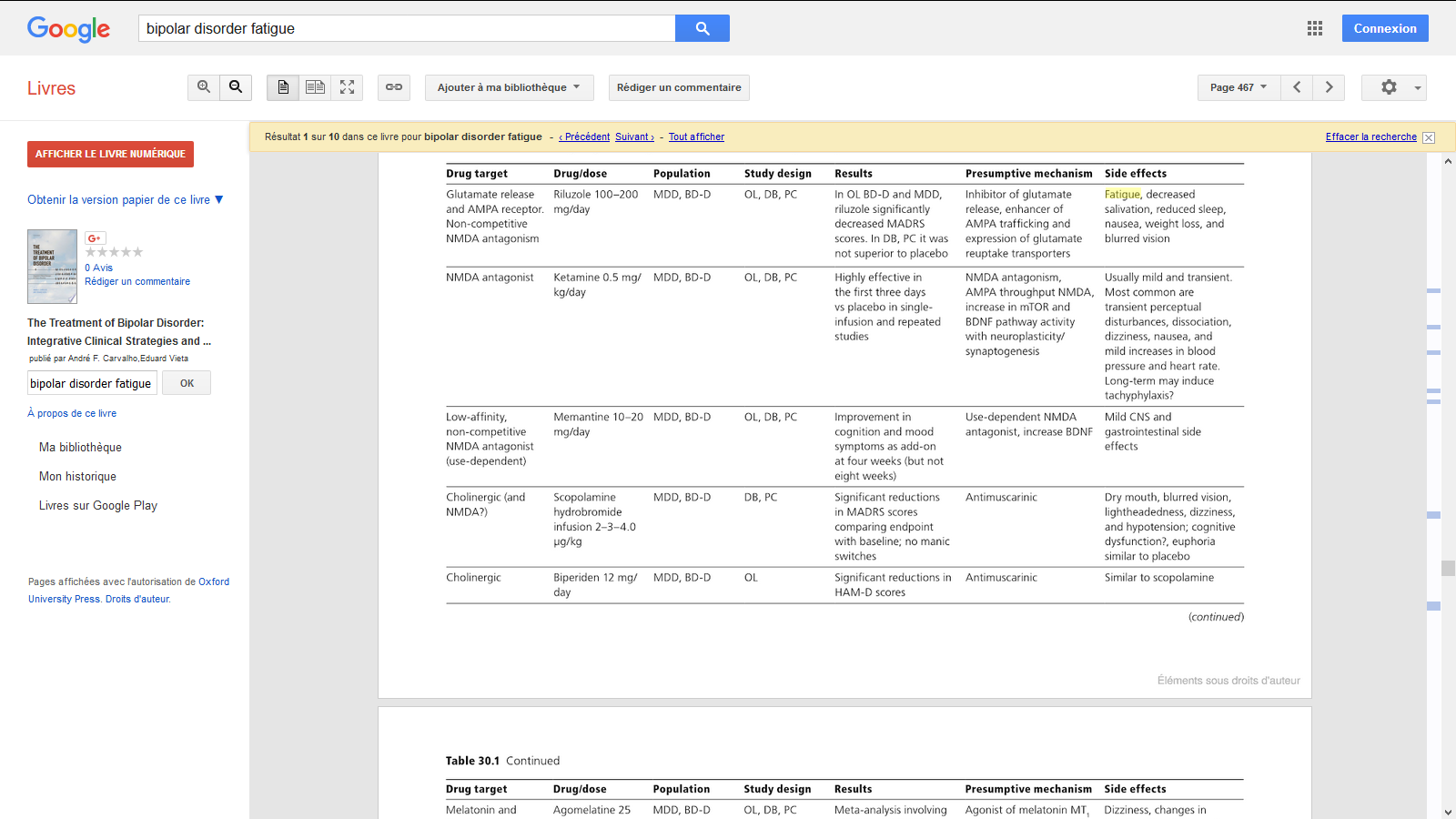 @Hip how are you so amazing?