I am writing to share the sad news that my friend Dr Annie Macintyre, Patron and past medical advisor to the ME Association, died during the night.

I have known Annie since 1987, when my friend Dr Richard Sykes and I began the Bristol ME Association Support group. Annie lived in Bristol having just moved from Bath and she made contact with the group. However, it wasn’t until the late ‘90s that we became close friends when she took me to her home after giving me a medical assessment as I was too severely ill to care for myself. From then on we have maintained a continuous friendship, phoning each other most days.

I used to refer patients to her when they phoned me for advice about ME if they needed a diagnosis or other help which only a doctor could provide. We used to joke that we ran an underground medical system.

Annie, as many of you know, wrote one of the first books for patients on ME and it proved very popular. She was hoping to update it, but her life over the past few years was taken up with travelling to such places as St Helena, where she had been the island’s doctor, to visit familiar haunts. Before she became ill, she had been a ship’s doctor and then specialised in eye diseases and spent time practicing abroad.

In recent years, she had a camper van which she loved to take around the country and which she continued to drive even when she became very ill over the past year. She also on a number of occasions visited the Irish ME groups of which she was a patron. Annie especially loved visiting the island of Lundy off the North Devon coast with friends and, being a hardened Scot, enjoyed the Spartan………and very windy……life there.

Annie suffered from Rheumatoid Arthritis and a couple of years ago she developed pulmonary fibrosis, a complication of the condition. In April she was offered Rituximab, but, unfortunately, she had a severe reaction to it and it initiated a very rapid decline.

The last months have been grim, as Annie bravely struggled with her increasing breathlessness. During much of this time, she remained in her flat, which is not far from me, with her two cats.

I have spent a lot of the time over the past months sitting beside her bed or speaking with her a few times a day on the phone. Last Friday, while we were chatting, she experienced an abrupt and serious deterioration from which she never recovered. The next few days were very challenging, but she became more peaceful by Thursday. I was planning to sit with her today, but last night Annie quietly slipped away.

I will greatly miss her.

(Notice Annie's expression when she is interviewing the consultant. There is a story about that 'gentleman'!!

I am so sorry that you have lost your dear friend CG.
I remember you talking of her often. It sounds as if you have some precious memories of her.
((hug)) from me.

Oh, I'm so sorry to hear this. What a long, hard journey final journey for such a warm and compassionate woman. But she had a brilliant life, despite her ME and RA, and she helped so many people along the way. You must be devastated at her loss.

Be kind to yourself – you've done everything humanly possible to support her, and now it's time to look after you. xx

mermaid said:
I am so sorry that you have lost your dear friend CG.
I remember you talking of her often. It sounds as if you have some precious memories of her.
((hug)) from me.
Click to expand...
Thanks @mermaid

I shall dearly miss our near-daily chats on the phone and our little trips out for lunch. I am also relieved though that these horrible several months are over with as it was heart-breaking to witness. It will be hard.
G

I am also very sorry for your loss @Countrygirl and your friend sounds like an incredible person and friend.
T

So sorry that you lost a good friend and sorry to hear of her death, I did not recognise her name but it sounds like she did a lot of very good things for the ME community.
Last edited by a moderator: Nov 26, 2018

Here is the documentary I couldn't locate yesterday.

Making the most of it

So very sorry for your loss @Countrygirl.

The ME Association and Dr Charles Shepherd have been busy over the weekend preparing this article on Annie.

The photo is the last one I took of her when we took her to a cafe near her flat in July. Following this very short trip she became too sick to try a little outing again.

In Memory of Dr Anne Macintyre: ‘An extremely kind and compassionate doctor’. | 26 November 2018

We are very sorry to have to report the death of Dr Anne Macintyre – a doctor with a longstanding personal and professional involvement with all aspects of M.E.

Unfortunately, in addition to having the disease herself, Anne had other serious health problems and had been in poor health for quite some time.

She died peacefully on Saturday November 24th at her home in Tiverton in Devon.

A friend and colleague

Anne will always be remembered as an extremely kind and compassionate doctor who helped large numbers of people with M.E. over many years.

She helped them obtain a diagnosis, to get appropriate management advice and she provided support when they were battling with the DWP over benefit entitlement.

She will also be remembered for her book ‘M.E. A Practical Guide’ which was extremely well received and is still regarded by many as being one of the best. 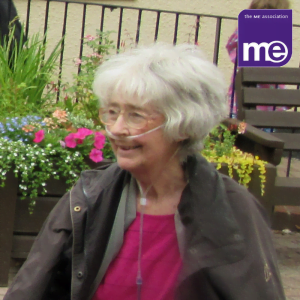 @Country Girl..
Terribly sorry to hear of Dr Anne's death...I have written re this on your other thread re her video...
T

I am so, so sorry @Countrygirl , she sounds like she was a wonderful woman.
R

We are so sorry for your loss @Countrygirl. We know how much she meant to you (and vice-versa).

Dr Macintyre sounds like such a lovely lady and a wonderful character who really cared about ME patients and her compassion will be with her in the next world.
But I am sorry your good friend has passed, @Countrygirl My deepest condolences.
T

I'm sorry to hear about Dr Anne and the suffering she went through and sorry for your loss @Countrygirl. It must be hard losing such a dear friend.
I once had the pleasure to attend a Conference at which Dr Anne was on the panel. I'm sure everyone who was there was cheered by her presence, compassion and wise and helpful suggestions. I have a copy of her book and found it to be very good practical info and some interesting info on the background of M.E. / outbreaks and so on...
I feel inspired by Dr Anne who clearly gave so much to so many. What a woman! God rest her soul...

Countrygirl said:
Here is the documentary I couldn't locate yesterday.

Click to expand...
@Countrygirl
Hello. You posted this video a few years ago. I'm just now discovering it... and most importantly the legacy of your beautiful friend. I won't be able to watch the whole video, but I already observed what a beautiful, gentle and thoroughly intelligent woman she was. How wonderful to have had her as a close friend.
How are you doing currently...? It's basically impossible to fill the void left by great friends .... but I do hope you have come across new ones and that grieving her wasn't something that set you back permanently in some form or another.
I only became active to share some of my
experiences when I heard of too many ppl succumbing to aspects of this disease.
Did she share with you her experiences in writing the book? And was it overall a good experience for her?

Your words about her traveling around her in van and visiting with other ME groups and your long days together .... it really is full of such specialness. Thank you for sharing about your beloved friend.
You must log in or register to reply here.
Share: Facebook Twitter Reddit Pinterest Tumblr WhatsApp Email Link