This is a really interesting article from the Journal "Nature" called, "How pandemics strengthen links between viruses and autoimmunity". Here is the link:

The article is a little bit long but was super interesting (at least to me )! My doctors have all told me that my autoimmune diseases were caused by the EBV virus (I had severe Mono from EBV in 2012). So this article makes perfect sense and gives really solid scientific examples. It also discusses how the link between viruses & autoimmunity can now be studied in real time on a massive global scale in light of COVID and Long Covid.

A rather good article. It mentions three ways that viruses can cause autoimmunity:

Nature said:
The body’s immune response to viruses has long been thought to spark autoimmune disease. A virus affecting millions of people could help researchers to finally know for sure.
[...]
In some rare instances, the link between an infection and autoimmunity is clear. But for common autoimmune diseases, such as multiple sclerosis, type 1 diabetes, lupus and rheumatoid arthritis, concrete evidence has proved harder to come by.

Viruses cannot typically be recovered from diseased tissue, and gathering epidemiological evidence is hampered by the often lengthy time between infection and the noticeable onset of an autoimmune condition. Such difficulties mean that a link is not generally accepted.
[...]
Improved understanding of the mechanisms by which viruses trigger autoimmunity is shedding light on the role that viruses have in common autoimmune diseases.
[...]
When a virus enters the body, the immune system jumps into action. In hours, immune cells including neutrophils and natural killer cells begin attacking anything that does not clearly belong to the body. Inflammation sets in, followed by the activation of immune cells called T cells and B cells. Unlike the early immune response, these cells target markers, known as antigens, that are specific to a particular invader.
[...]
Sometimes, however, B cells erroneously generate antibodies against the body’s own proteins. When people are exposed to Epstein–Barr virus (EBV) for the first time, for instance, “a number of autoantibodies arise”, says Gregg Silverman, an immunologist at NYU Grossman School of Medicine in New York City.

One reason for this misbehaviour by B cells is that in the heat of the battle, the correct targets can become unclear — and more intense fights generate greater confusion. “The more cells killed by an infection, the more autoantigens are released,” says Silverman. In the case of infection with the virus SARS-CoV-2, there can be so much tissue injury that “the immune system cannot figure out initially whether it should be recognizing the virus or self-antigens that are being released from our own cells”, he explains. This phenomenon, known as epitope spreading, leads to both friend and foe being hit.

The body can also fall victim to mistaken identity when a protein associated with an invader closely resembles one of the body’s proteins. The standard example of this molecular mimicry is acute rheumatic fever, a rare complication of a throat infection caused by the bacterium Streptococcus pyogenes. One of the bacterium’s proteins is structurally similar to a cardiac muscle protein, leading the immune system to target both, and causing inflammation in the heart.

Other factors also contribute to errant targeting. For example, tissue damage can reveal self-antigens that are not normally seen by the immune system, which can result in them becoming unfortunate targets. In addition, because viruses use the body’s cells to replicate, they contain pieces of human phospholipids, which can make it difficult for immune cells to tell friend from foe. For most people, however, these autoantibodies don’t pose a major problem. “You might have autoreactive cells, but you don’t have disease,” Ballesteros-Tato says.

As the immune system starts to win, it pulls several levers to quell friendly fire. Regulatory T cells, for example, secrete chemicals that dampen inflammation, soak up pro-inflammatory cytokines and suppress other immune cells (see page S60). “These cells are putting brakes on the process by limiting the help B cells get,” Ballesteros-Tato explains.

But if the brakes fail to engage, disease can take hold.
[...]
In people infected with viruses, Ballesteros-Tato thinks that higher levels of inflammation make it more likely that autoimmunity will be allowed to run amok. “In order to have autoimmunity you have to have a breakdown of tolerance,” he says. “In a high inflammatory environment, this is easier.”
[...]
The COVID-19 pandemic has pushed the link between viruses and autoimmunity into the spotlight. Over the past year, research suggesting that people with COVID-19 carry numerous autoantibodies in their blood has been widely reported — although the mechanism at play is as yet unclear.
[...]
Compiling the evidence for the role of viruses in autoimmune conditions could lead to new approaches to treat or prevent immune dysfunction. If a specific virus is known to trigger or exacerbate an autoimmune disorder, for instance, then a vaccine against that virus could be a powerful tool.
[...]
[Knut Dahl-Jørgensen and a colleague at Oslo University Hospital] detected mild viral infection in the pancreases of adults who were newly diagnosed with type 1 diabetes, as well as traces of enteroviral infection in the pancreases of people who had died as a result of diabetes. “If we can kill the viruses, maybe the [autoimmune] mechanisms will calm down,” says Dahl-Jørgensen.

For a long time, the link between viruses and autoimmunity has been pushed to the sidelines. “I’ve always felt that infectious diseases in general were totally underestimated as a general cause of autoimmunity,” says Mignot. But the fresh attention on the effects of viruses that has come with the COVID-19 pandemic could leave a lasting impact on the field. “This is an opportunity for us to clear this up once and for all,” Iwasaki says.
Click to expand...
(terms bolded)

Pyrrhus said:
A rather good article. It mentions three ways that viruses can cause autoimmunity:
Click to expand...
Thank you so much for the excellent summary of the article @Pyrrhus! When I posted it, I couldn't decide which parts to quote b/c it had so much good info and I really appreciate how you broke it into sections.

The role of infections in autoimmune disease (Ercolini and Miller, 2009)
https://forums.phoenixrising.me/threads/the-role-of-infections-in-autoimmune-disease.31721/

A paper that describes molecular mimicry and epitope spreading, as well as bystander activation and cryptic antigens. 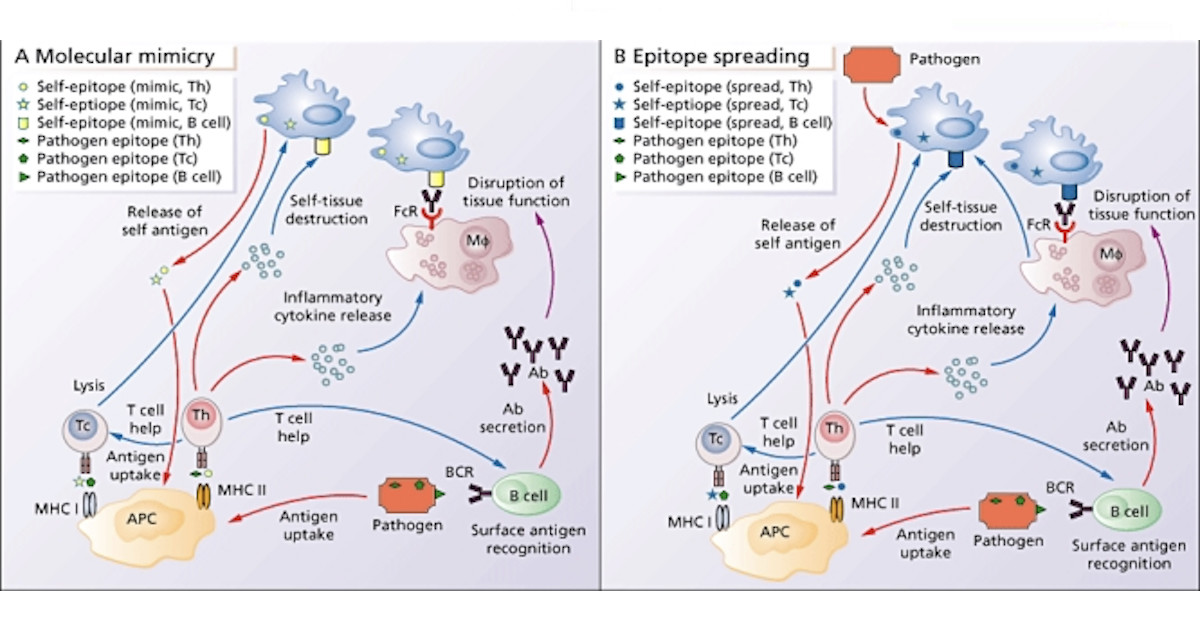 Mechanisms by which pathogens may cause autoimmunity.

Re-framing the Theory of Autoimmunity in the Era of the Microbiome: Persistent Pathogens, Autoantibodies, and Molecular Mimicry (Proal and Marshall, 2018)
https://forums.phoenixrising.me/threads/why-autoimmunity-probably-doesnt-exist.75795/

The theory of autoimmunity was developed at a time when the human body was regarded as largely sterile. Antibodies in patients with chronic inflammatory disease could consequently not be tied to persistent human pathogens. The concept of the "autoantibody" was created to reconcile this phenomenon.

Today, however, the discovery of the human microbiome has revolutionized our understanding of human biology. Humans are superorganisms that harbor trillions of persistent microbial cells. Indeed, vast human microbiomes have been detected in human tissue and blood. These microbial ecosystems harbor thousands of newly identified bacteria, viruses, and other microorganisms -- most of which can act as pathogens under conditions of immunosuppression.

The theory of autoimmunity must be revised to account for the human microbiome. Here, we propose a model in which "autoantibodies" are created in response to chronic, persistent microbiome pathogens. The structural homology (molecular mimicry) between pathogen and host proteins can result in "collateral damage" to surrounding human tissue.

This calls for a paradigm shift in autoimmune disease treatment. Immunosuppressive medications palliate inflammatory symptoms at the expense of microbiome health and balance. In contrast, treatments that support the immune system in autoimmune disease could allow patients to target pathogens at the root of the disease process.
Click to expand...
(bolding added for emphasis and spacing added for readability)
J

(NYSE American: AIM) today announced the filing of a provisional patent application for Ampligen as a potential early-onset intranasal therapy designed to enhance and expand infection-induced immunity, epitope spreading, cross-reactivity and cross-protection in patients exposed to a wide range of RNA respiratory viruses, such as influenza, Rhinoviruses and SARS-CoV-2, which causes the disease COVID-19.

Hi, I had ana and tpo anti bodies. However, after taking valacyclovir for a few years they have gone. My immunology Dr says it's very uncommon once you have tpo antibodies for them to go. Coincidentally I'm going this morning for a blood check again to see if it's still the case.

I believe it's very possible that the anti virals are the cause of the anti bodies disappearing. My main viruses are EBV and shingles. What do you think?

Additionally, I considered if I take the anti virals for several years the manufacturering of new cells and my body would eventually be EBV and shingles free. What do you think?