I am doing some osteopatic treatment at the moment and my therapist told me that I would have a scoliosis of the upper spine (which according to him is quite rare) and a slight chiari malformation (I don't think that's actually true). I had an MRI 2 years ago but it was not an upright MRI, just a normal one. Does anybody see anything wrong or could tell me that the osteopath was right with anything he mentioned?

I just want to exclude structural problems because I do have neck pain a lot and because of whtat the osteopath said.

Many thanks in advance for your inputs. 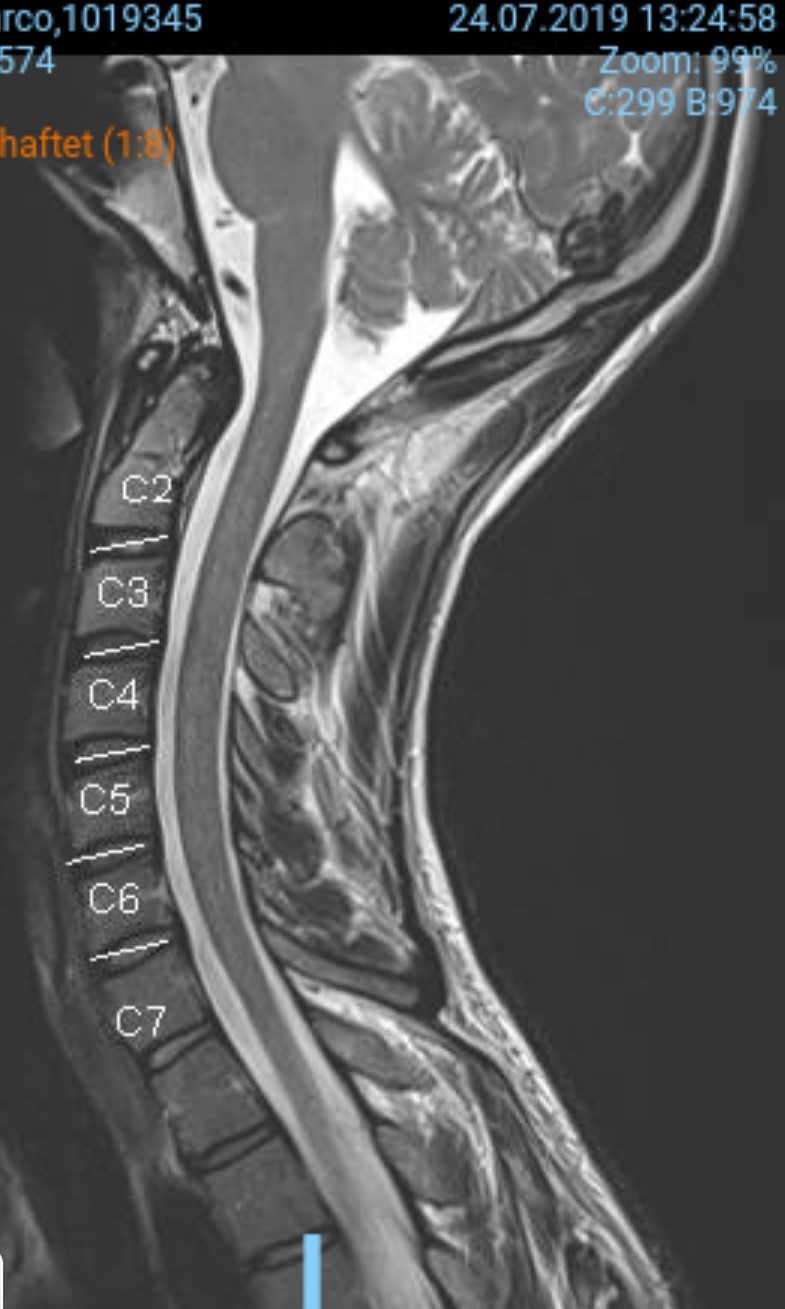 I also have the thickened ligament around odontoid process, like you have. In my case the surgeon think there is no compression.

Did you have evaluation for Chiari by the surgeon?

( scoliosis can't be noticed in the lateral view you posted ) 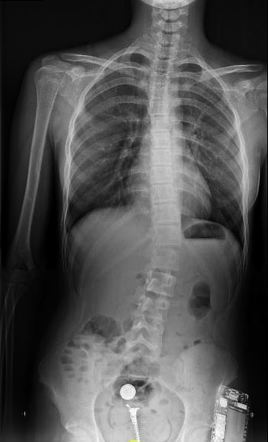 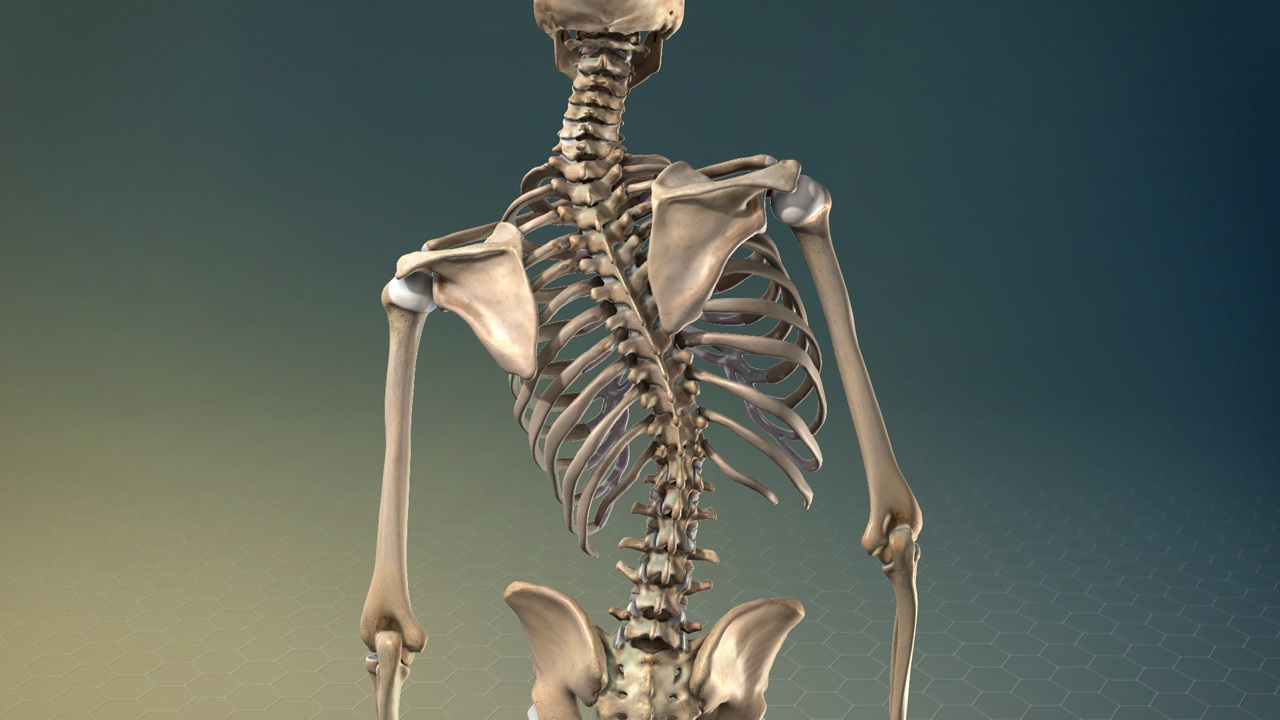 Scoliosis affects the entire spine. How could it not? I have an s-shaped curve like the one pictured. My Mom also had the s-shape except we were mirror images of each other.
M

Many thanks @pattismith and @Judee for your answers.

I noticed that it was pretty stupid to even talk about scoliosis of only the upper spine because it clearly affects the whole spine. And even more stupid was to believe one could see that on the attached MRI

But I still got 2 questions to you guys (and everybody else for sure):

1) Do you think that a scoliosis could actually worsen or even cause CFS? How did you treat that?
2) @pattismith Would you think that according to my MRI there is slighy compression or rather not? My radiologist did not comment on anything but my osteopath thinks that this is regarded as very mild chiari malformation and could cause problems... Not sure what to believe here..
V

Is it going off post if we expqnd this to malformations occurring in the in and out dimension as well as the side to side of sciolists?
M

@vision blue No, go ahead please if you see anything concerining in the posted MRI. Many thanks in advance!

@pattismith Many thanks for the suggestion!

Mrparadise said:
I noticed that it was pretty stupid to even talk about scoliosis of only the upper spine because it clearly affects the whole spine. And even more stupid was to believe one could see that on the attached MRI
Click to expand...
Oh, no. Don't feel stupid. This awful disease. It does make us feel so down on ourselves. You are so valuable. I'm sorry if I added to your feeling bad about yourself by the way I answered you. Please forgive me.

You actually came up with a very good question. I have heard how CCI and Chari can affect this disease but I never even thought about scoliosis.

I'm not sure. I do go to the chiropractor and he is able to get me pretty balanced but still I come home with this disease and have only felt a slight perk for a slight time after being adjusted. That only happened a couple of visits though.

Maybe if there is someone out there who actually had the scoliosis surgery while living with ME/CFS...maybe they could tell you if the surgery made them better. The hard thing is if it did they probably won't be here. People who get better tend to disappear from here and go back to happily living a normal life.

Mrparadise said:
I noticed that it was pretty stupid to even talk about scoliosis of only the upper spine because it clearly affects the whole spine. And even more stupid was to believe one could see that on the attached MRI
Click to expand...
Oh, you probably knew that. We just are good at: lapses of...ironic lapses.

If you have a slight chiari malformation show on a regular exam you should look into speaking with a specialist and getting more specific testing for CCI, Chiari, tethered chord. There was a guy here named Jeff I believe who completely recovered from his M.E. after finding out he had that condition and got surgery which resolved all of his issues. I read that there were also others who had the same recovery after discovering the same issue. Jeff made quite a large post thread about it here.
M

@Judee Nothing to be sorry for! Many thanks for your input.

@Martial The problem is that I do not know if this could really be considered a very mild form of chiari malformation. I would probably need to do am upright MRI while I flex/extend my spine and afterwards speak to a professional. But I thought maybe someone had a similar MRI and could therefore make a comment on it. I already know the story of Jeff and its actually amazing. But thanks a lot for mentioning it.

Mrparadise said:
@Judee Nothing to be sorry for! Many thanks for your input.

@Martial The problem is that I do not know if this could really be considered a very mild form of chiari malformation. I would probably need to do am upright MRI while I flex/extend my spine and afterwards speak to a professional. But I thought maybe someone had a similar MRI and could therefore make a comment on it. I already know the story of Jeff and its actually amazing. But thanks a lot for mentioning it.
Click to expand...
To my understanding Jeff was mentioning on normal exams it's hard to even catch it at all. So the fact this wasn't the type of test looking for it directly and you didn't do the extension version etc and it still showed means it could be worse than what is seen here. Worse meaning that it could be a big explanation behind all your symptoms in that case and you could be in a similar condition of recovery if that diagnosis is legitimate and you have the surgery to address it. So yes that would be a good idea! It would be awesome if you could have a resolution of things with a straight forward treatment like that.
L

Perhaps I can address some of these questions. First off, I'm a 74 yr. old female and have had scoliosis my entire life. L. sided scoliosis is indicative of a neurological problem (info given about 20 yrs. or so ago). I have accompanying kyphosis and lordosis and spent my childhood in either casts or braces. Rod surgery was discovered towards the end of the time I was being treated. I never had it b/c it was very new and we couldn't have afforded it anyway.

Later on it in life I sneezed while my l. arm was in the air. Extreme pain shot through that side of my body, especially towards the l. breast and under my l. arm. The MRI had just come along at that time, and I was discovered to have SM (Syringomyelia) and later ACM (Arnold Chiari Malformation). The cord surgery was an absolute nightmare and at that time I became ill with two separate viruses and feel that's when ME really developed. Bear in mind that I had symptoms like IBS from my early 20's on.

My scoliosis was hardly even seen, yet it had been so bad that I couldn't support myself at say the age of 4 (when treatments began in earnest). I walked....a lot and feel that probably did me more good than any other form of exercise.

I had ACM Repair Surgery five years after the first surgery..a neurosurgeon familiar with the new techniques was the person I used. My BP went from incredibly low to very high, something I'm still dealing with to this day, except that it's even higher again.

I would go to an osteopath familiar with myofascial therapy, but never to a Chiropractor (and I've done both). Most of all, I trust myself to know the limits of my own body the best. I do know that exercise is important...like it or not. But I know how far I can push myself and no one else knows that. I learn exercises, go only to myofascial therapists and have found at Jim's suggestion that exercising every 3 days is about right. I echo him on that thought. Right now I can't walk b/c of foot problems but I do try to keep my muscle tone and will fight to do so.

SM can be caused by an accident of any sort, but the most common type is by car. Neck injuries are common. ACM is a congenital defect with SM accompanying it...you always have both of them together. Accidental problems that lead to SM do not have the ACM involvement.

I believe that Jeff Wood is now advocating gentle neck exercises for people with CCI. I would do the same for ACM, because surgery is not for everyone. Not b/c I don't want to see people recover, but depending upon a lot of factors, it may be best to strengthen the neck muscles and see how one fares from there. Please don't just go wily nily into exercises, especially ones that can be damaging. Gentle...always gentle and you can build up from there if there are no aftereffects. Yes, expect pain, but it shouldn't be horrendous if the exercises are gone about properly.

I used to walk 3-5 miles each and every day for years. I'm a walker at heart, and was also a bike rider. Sadly, the latter had to go b/c with my problems I can no longer balance on a bike. Instead I focus on what I can do...I have to otherwise I'd be in even worse condition. I wish everyone good health. Yours, Lenora.
Last edited by a moderator: Apr 11, 2021
You must log in or register to reply here.
Share: Facebook Twitter Reddit Pinterest Tumblr WhatsApp Email Link