If you ever wonder what I do in my spare time... It is this.
P

I'm focusing on accomplishing OOB'ing before i die but many different health problems keep impeding me ... dealing with damn venous insufficiency, feet etc ... for quite a while, i have wondered why my knees are red ... i think the veins may be starting to heal ... cross my fingers ... lol

i'd like very deep information on incarnation process ... i'm sure the illu mi na ti group who live in those deep underground cities have complete information on that and how the universe actually works ... us surface people get kept in the dark and given just scraps of information ... a lot of the information that use to be on surface has been hidden away

jesse's mom said:
If you ever wonder what I do in my spare time... It is this.
Click to expand...
@jesse's mom
Why not Tarot anymore?

@jesse's mom
Used to be my favorite go-to. Mama wasn't a big fan of a lot of the woo, but after I gave her a copy of Jung and the Tarot, she came around quite a bit. Astrology appealed to her sense of drama and the multiplicty of everything, especially the huan soul.

I like the old Rider deck, but in its new, updated beautifully water-colored version, the Universal Tarot, water colored beautifully, with the imagery and the drawings the same, just refined into thin-line drawings and beautiful shadings that make it less 2 dimensional..

I used the original Rider-Waite-Smith deck for decades, even tho the glaring primary colors bothered me, and sometimes interfered with the intuitive flow. I lost track of them during a move about 15 or so years ago, and replaced them with the deck I reference above. My only complaint is that the cards are so stiff and high-quality that even after all these years, they still slip around during the most gentle of shuffles.

But they're so aesthetically pleasing to me that I don't care.

I've tried a lot of other decks, but beyond artistic appreciation, they just don't speak to me.

I love the I Ching too, but it only comminicates to me on the spiritual level, where the tarot speaks to me on all levels.

I picked up a Rider deck of my mom's and was hooked! Then I got into Joseph Campbell and his Myths and Archetypes!!! Wow I was about 10 years old!

I have used the cards for not only divination, but for daily meditation (not my Zen)!

The deck I am using now and for the last 20 or so years is the Motherpeace I will link here. Just look how beautiful the Star is 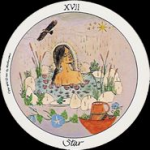 spoiler alert! lots of Woo in this thread!

Then beat them up just a little!

jesse's mom said:
Then I got into Joseph Campbell and his Myths and Archetypes!!! Wow I was about 10 years old!
Click to expand...
Wow. That one's heavy sledding at any age. Somewhere, I got the impression that you didn't much like to read the heavy stuff, but now that I know otherwise, I highly recommend Jung and the Tarot. I actually found it better, deeper, and more informative, on so many levels, than Myths & Archetypes. Not a big Campbell fan, too much hot air and intellectual theft.

The MotherPeace deck is really lovely and imaginative, but again, it didn't speak to me beyond the artistic level. Will look at it again and see what's changed in my current 3 brain cells. Thank you, LilD, for the link, very thoughty of you.

you are most welcome, WP

Truth is you got the idea I did not like heavy reading because I can't read anymore... much!

All that wonderful reading is beyond me right now...
Good thing I read some stuff before I got sick...

jesse's mom said:
have you tried putting cornstarch on your hands and shuffling the deck plus mixing them on a wooden board (cutting board) with cornstarch on your hands.. That might make them less slippery.
Click to expand...
Haven't tried cornstarch (too much danger of liquid, like sweat or damp, working in with it which would not be good for the deck), but did actually try some white pool cue chalk, which helped a little, temporarily.

I've done everything to this deck, and it just stays shiny new, which on one hand is nice, on the other, a little irritating....... and on the third hand, downright spooky.
Last edited: Feb 24, 2019 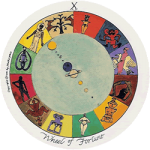 YippeeKi YOW !! said:
Haven't tried cornstarch (too much danger of liquid, like sweat or damp, working in with it which would not be good for the deck), but did actually try some white pool cue chalk, which helped a little, temporarily.
Click to expand...
We are so the same and little bits of different.. I want your sweat on the cards, and blood and tears!

jesse's mom said:
But you might be underestimating me!
Click to expand...
@jesse's mom
Hiiiiiighly unlikely . Probably not even a remote possibility . We learned the same lessons, tho I learned them later because I can sometimes be clueless .